At first, concept artist Daryl Tan doesn't even mention "art" when asked to describe his work. "I'm an idea salesperson," he says.

So are all of Daryl’s fellow concept artists on the Overwatch team. And it’s their job to make lots of people—inside Blizzard and out—into believers.

When a player’s interacting with a creative work, they need to be convinced to suspend their disbelief. Immersing you in another world requires an artist to invent credible details and to ensure their work keeps its essence in the face of development iteration. Here’s how the Overwatch team—armed with Photoshop and an aptitude for 2D illustration—does it.

Senior concept artist Qiu Fang started at Blizzard in 2016, and he was soon assigned to work on the Talon units deployed to stop Blackwatch during the Overwatch: Retribution Archives mission. Those units weren’t the stars of the show—that honor always applies to the players’ heroes—but they had to hold their own against Overwatch’s colorful and iconic cast. Qiu set out to make them special, even though their gameplay “job” included getting picked off left and right.

“A big part of what drove me to become a character concept artist was playing character-centric games when I was growing up. I made it my goal from day one to design a hero,” said Qiu, who would later handle concepting Overwatch’s 31st hero, Sigma. He applied that ambition to his first lineup of Talon toughs, treating them as “mini-heroes.”

During the ideation phase (a period of experimentation and revision for in-development game content), Fang worked with game designers and writers on the Overwatch team to learn about their vision for the gameplay and Talon’s backstory. When it became clear that several Talon agents would have a unique ability or weapon—sweeping melee attacks, wall-climbing, grappling hooks—his imagination took off.

Qiu describes his role at this stage as “finding visual solutions to gameplay problems”—making sure each distinctly outfitted Talon unit would be individually recognizable by players at a quick glance without sacrificing their overall cohesion. One Talon unit, who Qiu dubbed “Shield Guy” to summarize his gameplay, seemed like the total package: heavily armored, with a projected shield and a beam weapon. A mini-hero. 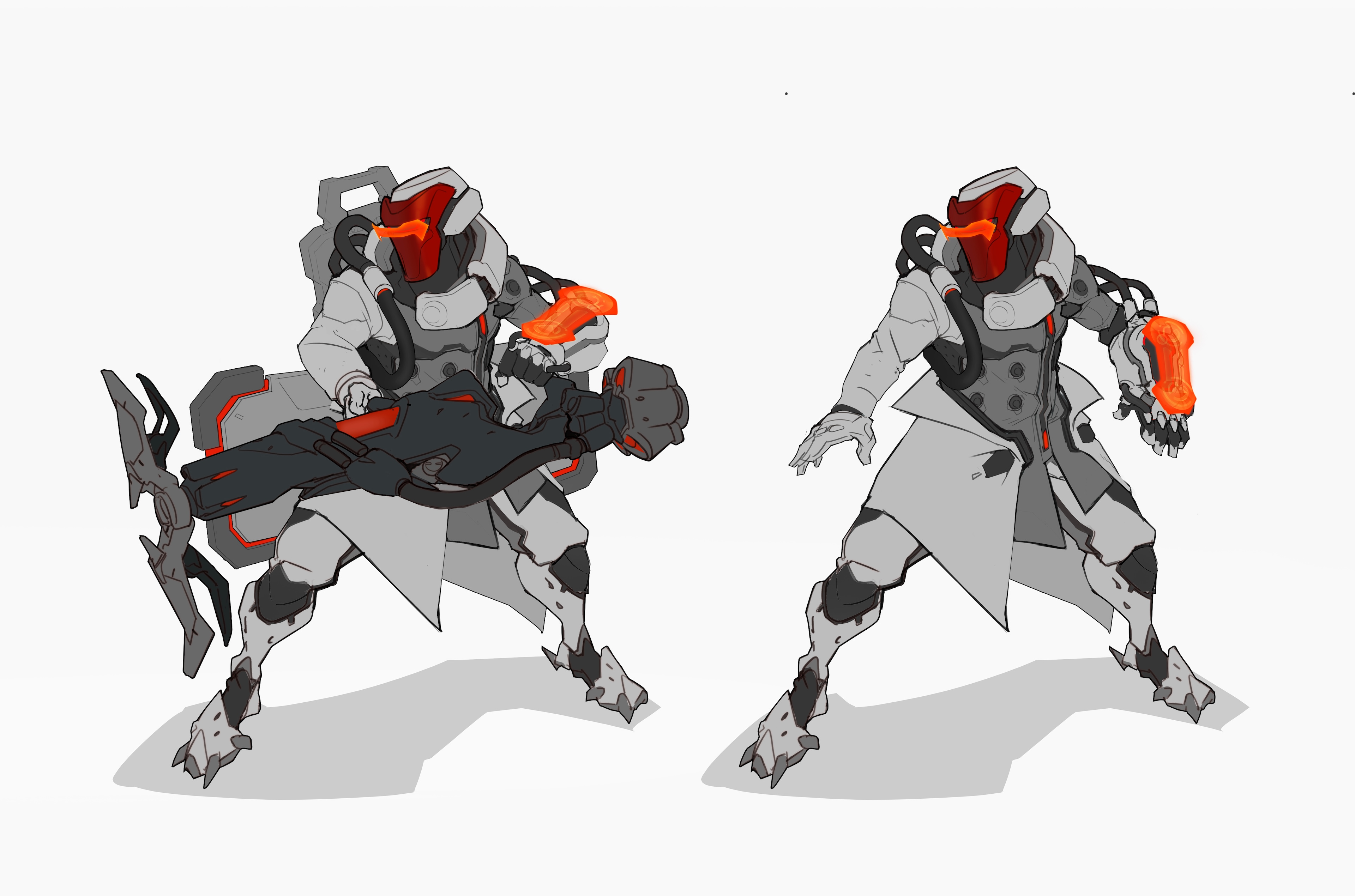 As awesome as the concept was, the team had trouble making the design cohere—it was too abstract, lacking a clear role like “sniper” or “brawler.” Despite all its power and versatility, it had a lot of overlap with other members of the Talon response squad. On the game design side, the beam didn’t feel right in playtests, and Shield Guy’s silhouette didn’t render him easily identifiable. Qiu made a number of sketches to try and maintain the existing gameplay.

Qiu and the rest of the team also wondered about other options. In Retribution, Talon’s unleashed a fast threat-response squad; would a shield just slow them down, especially when they’re so good at taking cover? They removed the shield, and a more tactical vision of Talon emerged in Rialto.

Concept artists don’t just work on shiny new units as composites—they’re dreamed up and created in pieces. For example, to invent the futuristic weaponry used by Null Sector and heroes alike, Daryl studies the designs of a range of arms from the real world and present day, following the traces of technological iteration. “When firearm designers push for a more ergonomic or reliable design, they change up ‘standard gun anatomy’ and often make guns more visually compelling.” It makes sense that the evolving weapons tech in Overwatch’s world of the future would follow the same approach as real-world weapon system design—more automated, safe, or carefully contained ways of feeding ammunition, for example, and all the new shapes and moving pieces that result. 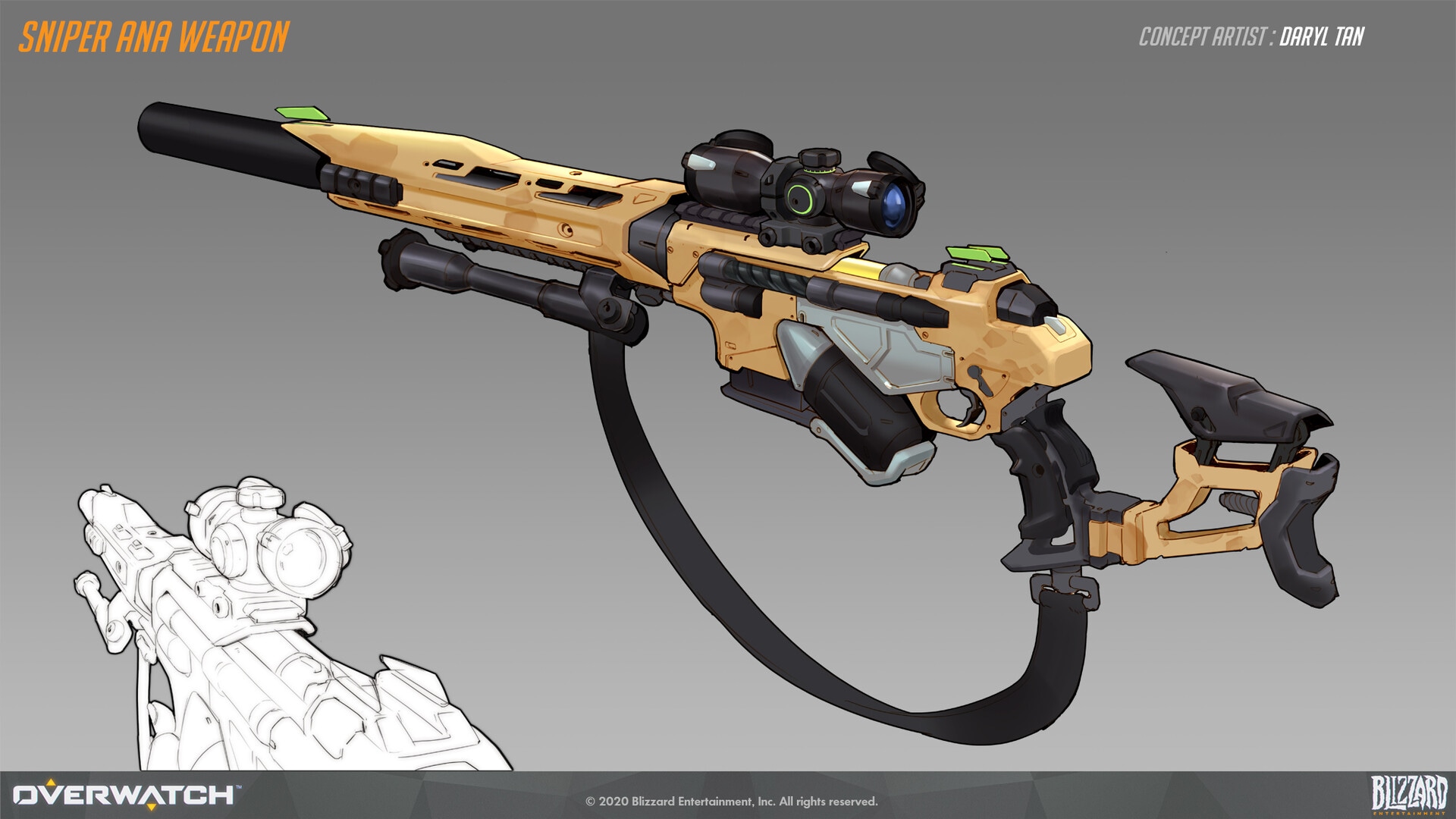 When concept artists work on skins, they try to keep their ideas instantly familiar—Qiu starts with recognizable objects, then stirs in elements of Overwatch’s futuristic aesthetic, like mechanical joints and LED lights. “The end result is that big shapes tend to appear near the top of characters so they’re visible from far away—it isn’t until you get up close that you see all the details.”

Remixing well-known visuals presents obvious challenges. Overwatch skins shouldn’t radically change the silhouette of a character—that’s what helps you recognize who you’re facing! And some skins are also restricted in how they’ll be able to animate. Movement for characters like Pharah or Reinhardt acknowledges the mechanical joints of their armor, and swapping this out for a skin would mean revising how the character behaves, not just how they look, creating recognition challenges for players.

It’s a fundamentally goofy premise, realized during Overwatch’s anniversary event in 2019—Mei’s outfit remixed to that of a server in a boba shop, her Endothermic Blaster altered to dispense bubble tea—but crafted with attention to detail that Qiu thinks makes all the difference in the world. “It would be really easy to make this skin look like a bad Halloween costume, as a bunch of pieces that are stitched together, rather than something that was manufactured in the world of Overwatch.” 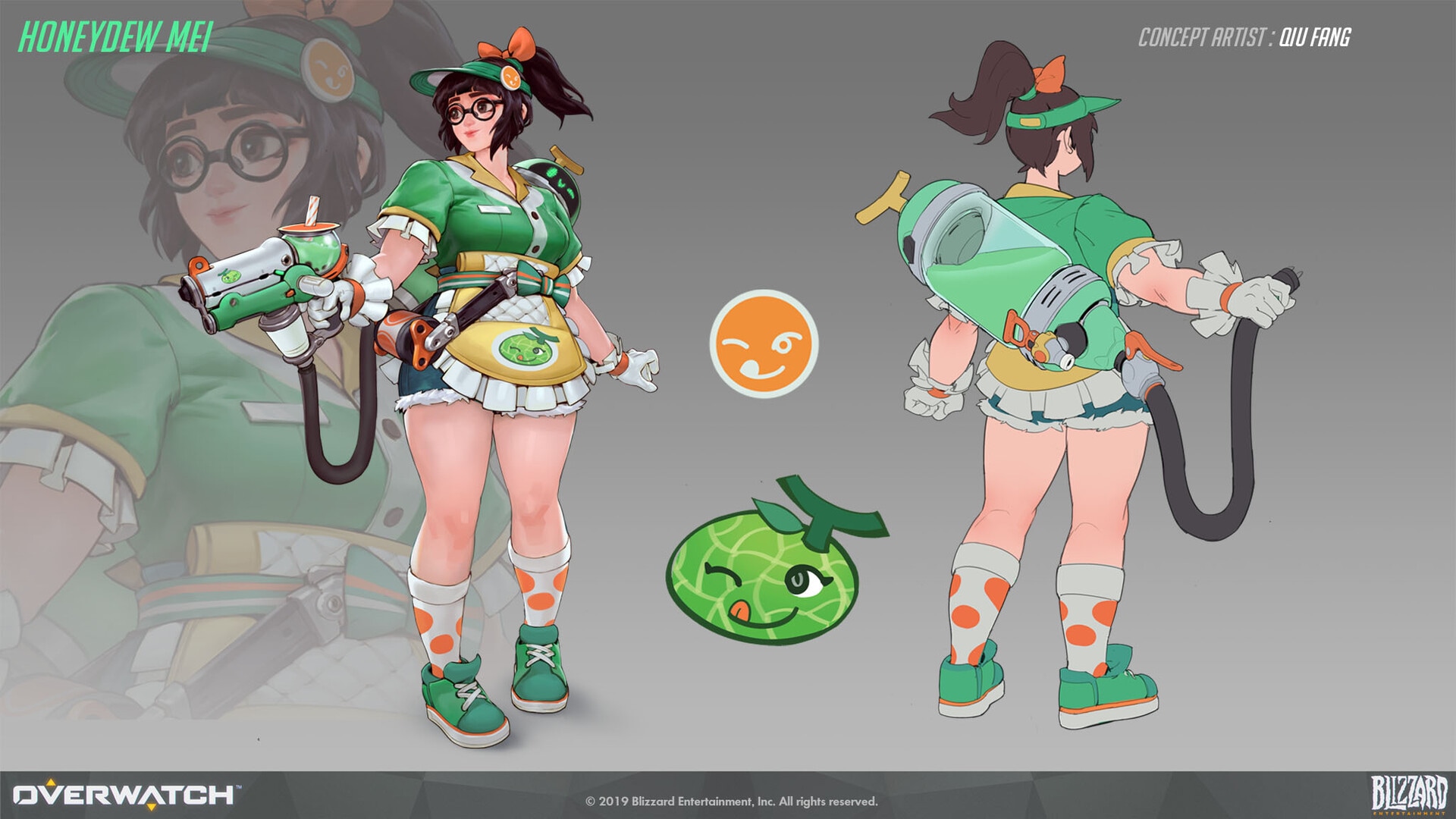 But Honeydew Mei’s skin maintains her existing silhouette even without her cold-weather gear. Her Bubbledew Blaster is still battle-ready, with a firing mechanism and canister designed to operate like a weapon, and the all-important tiny details (small boba balls, oversized straw, vacuum-sealed top, Bubble Dew logo) reminding us of the real world while we’re firing icy tapioca. The details, Qiu says, anchor the over-the-top skin in reality. “You can clearly make out the boba bottle, but it’s sunk into a sci-fi-looking gun.” 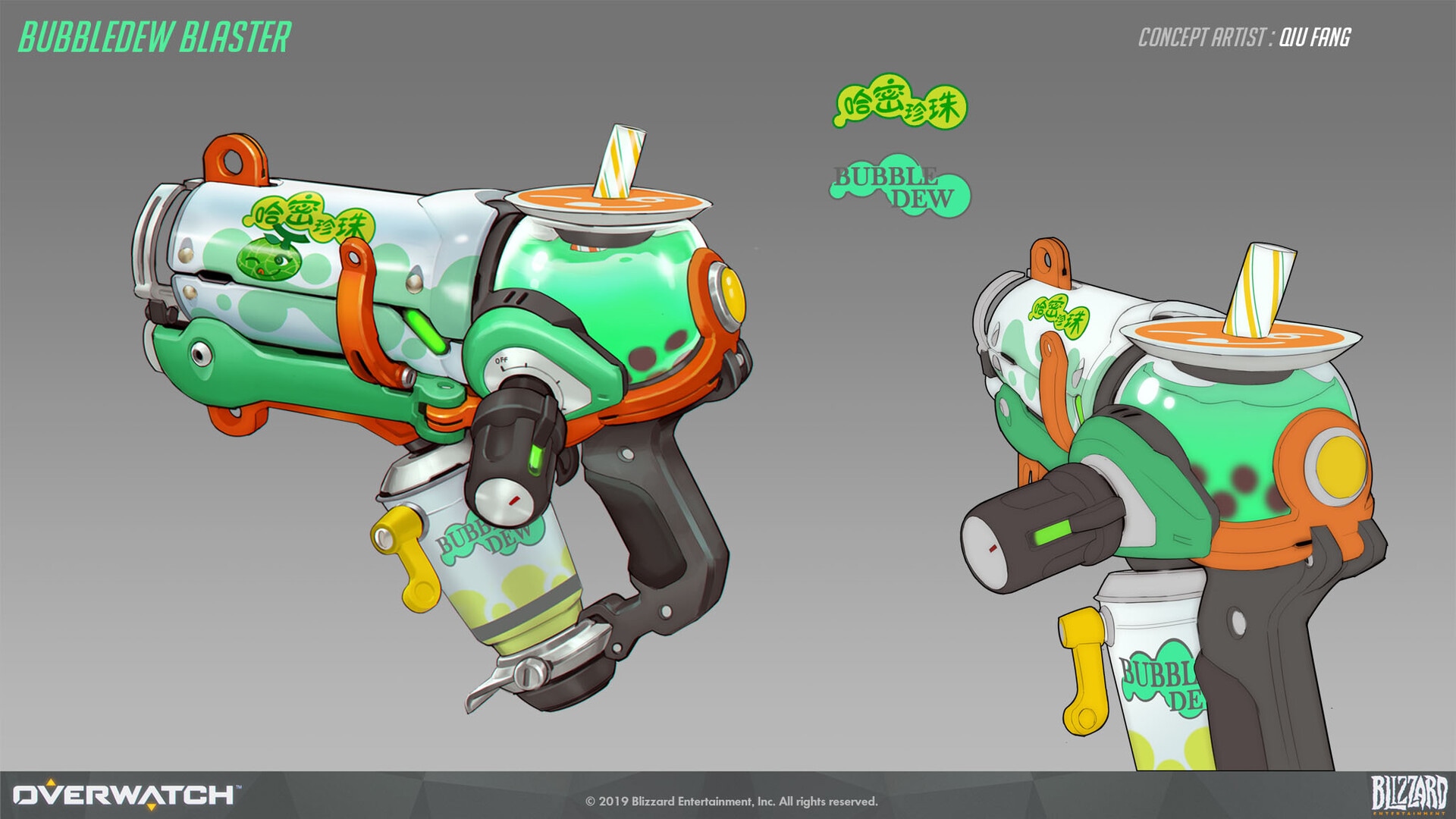 In addition to illustrating weapons, skins, and heroes, each of the Overwatch team’s concept artists has the game’s overall aesthetic in their charge. That responsibility can be a challenge, but Daryl and Qiu agree that they’ve got room to be creative while still hewing to a well-established style, what Qiu describes as a “a happy marriage” of realistic and stylized presentation.

Daryl thinks there’s wide appeal to be found in Overwatch’s vibrant color palette and shape language—the use of highly familiar, fundamental shapes, like squares and circles, to evoke common feelings and ideas (think of “sturdiness” for squares or “harmlessness” for circles, which have no sharp edges).

Concept artists need engineers, animators, and tech artists to reify their wildest ideas, and designers depend on great concept art to make gameplay as communicative and fun as it can be. Both Daryl and Qiu admit that artists can feel the pressure of helping everybody else live up to their best ideas. But, in part, that pressure has helped them create things they’re really excited about. 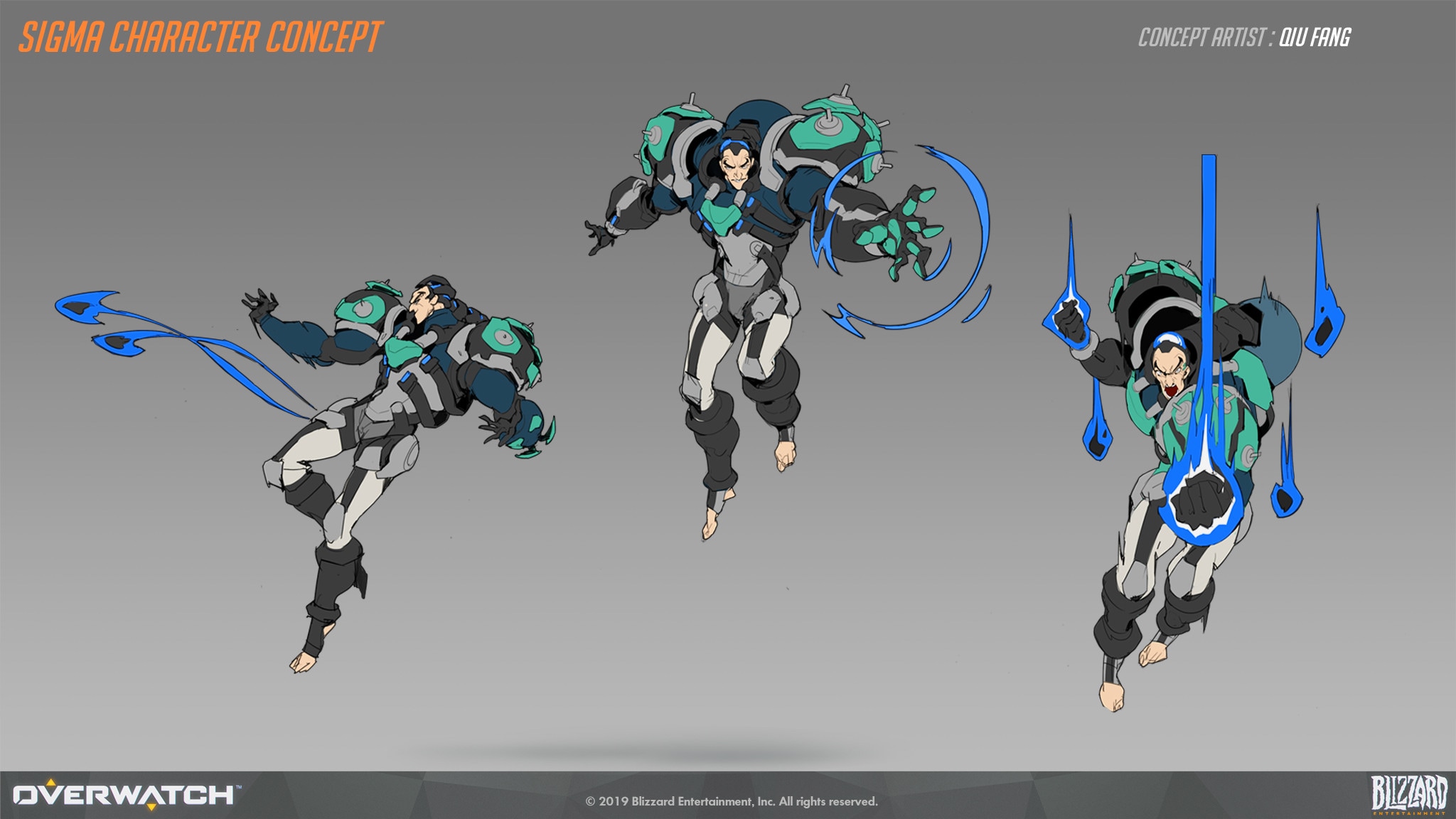 “I’ve always been into abstract sci-fi ideas, a lot of which can be difficult to represent by yourself as a 2D artist,” says Qiu. “Developing Sigma really allowed me to see the value of having a team of professionals all working towards a common vision. We were able to explore high sci-fi concepts [like kinetics and gravity control] more in-depth using animation, sound, vfx, and even gameplay.”

Daryl remembers being impressed by his co-workers’ talent when they developed a skin that imagined Ana’s time in the Egyptian military. “We had a couple of chats about how to deal with the ghillie suit material of her coat, but they’d done it before and were veterans on the topic. Usually, when I hand off a concept [to another artist], we look at the progress of the model together, and spend time jamming about areas to polish. But Sniper Ana came together so smoothly that I didn’t even see the animated model until the trailer was out!” 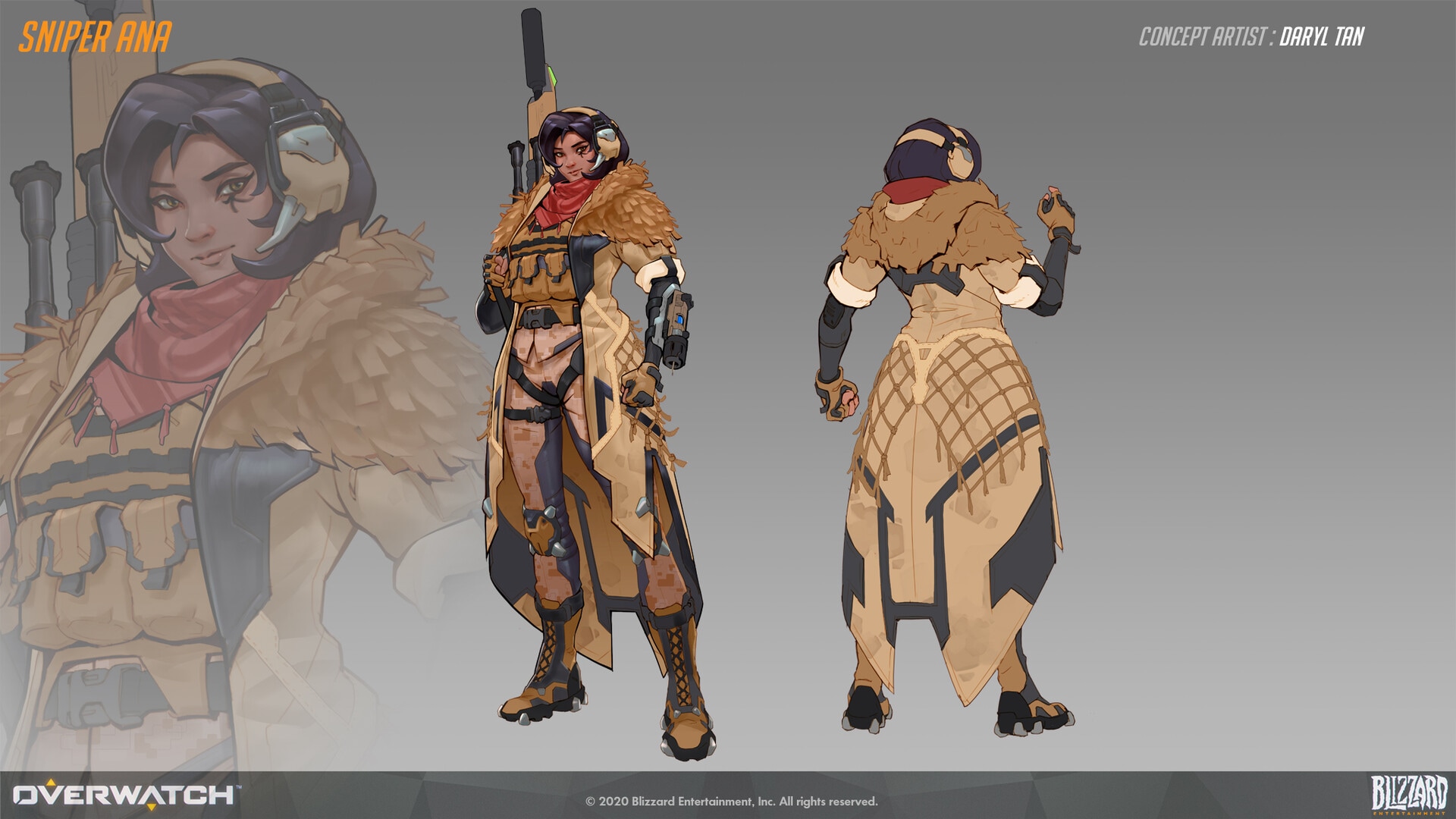 The camouflage net on Ana’s coat blended with and complemented her existing silhouette; the hood of her ghillie suit made the move to 3D without losing its subtle curve. “[Senior Technical Artist] Marcus Krautwurst, who handled the rigging of the model, looked at my design and knew exactly how to work with it to avoid awkward clipping from all the camouflage materials. He did a phenomenal job.”

The COVID-19 pandemic has certainly changed the way they collaborate. Before moving to work from home in March, anyone who wanted to show off a mockup or ask a question would usually drop by a teammate’s desk or huddle over a screen. Now, through chats and digital conferences, they’re finding that the team’s casual approachability—and what Qiu calls their “childishness”—is keeping them steady.

“I tend to prioritize having fun over everything. In school and at home, that wasn’t really encouraged, and it was always seen as something to grow out of,” he notes. “But no matter what geeky, nerdy thing you’re into, there are people on the Overwatch team for you to jam with. We’re into coffeemaking, mountain biking, anime, 3D printing, cars, basketball, karaoke, diving, fighting games, chess… and that’s just the 15-odd people who sat in my old bullpen. The team immediately felt like family: Yes, it’s full of professionals with years of experience, but they’re also just a bunch of big kids trying to have some fun.”

Despite the experience level of the team, Qiu got support from day one, even as a newer artist. “When I first joined Overwatch, I was halfway through art school and feeling out of my depth. The team gave me an opportunity to work on a dream project and taught me everything I know. Overwatch isn’t just what I work on; it’s also kind of where I grew up.”

“Aside from being great developers,” Daryl adds of the Overwatch team, “they’re wonderful people.”

The Overwatch team is always looking for new artists. If you’re interested, check out our open opportunities here!