It’s time for another Developer Insights in which we hammer out a hero’s design and respective mechanics. We’ll be hitting you with a ton of information this week, as Game Designer Matthew Cooper and Senior Game Designer Richard Khoo join forces to lay down the law on Muradin. 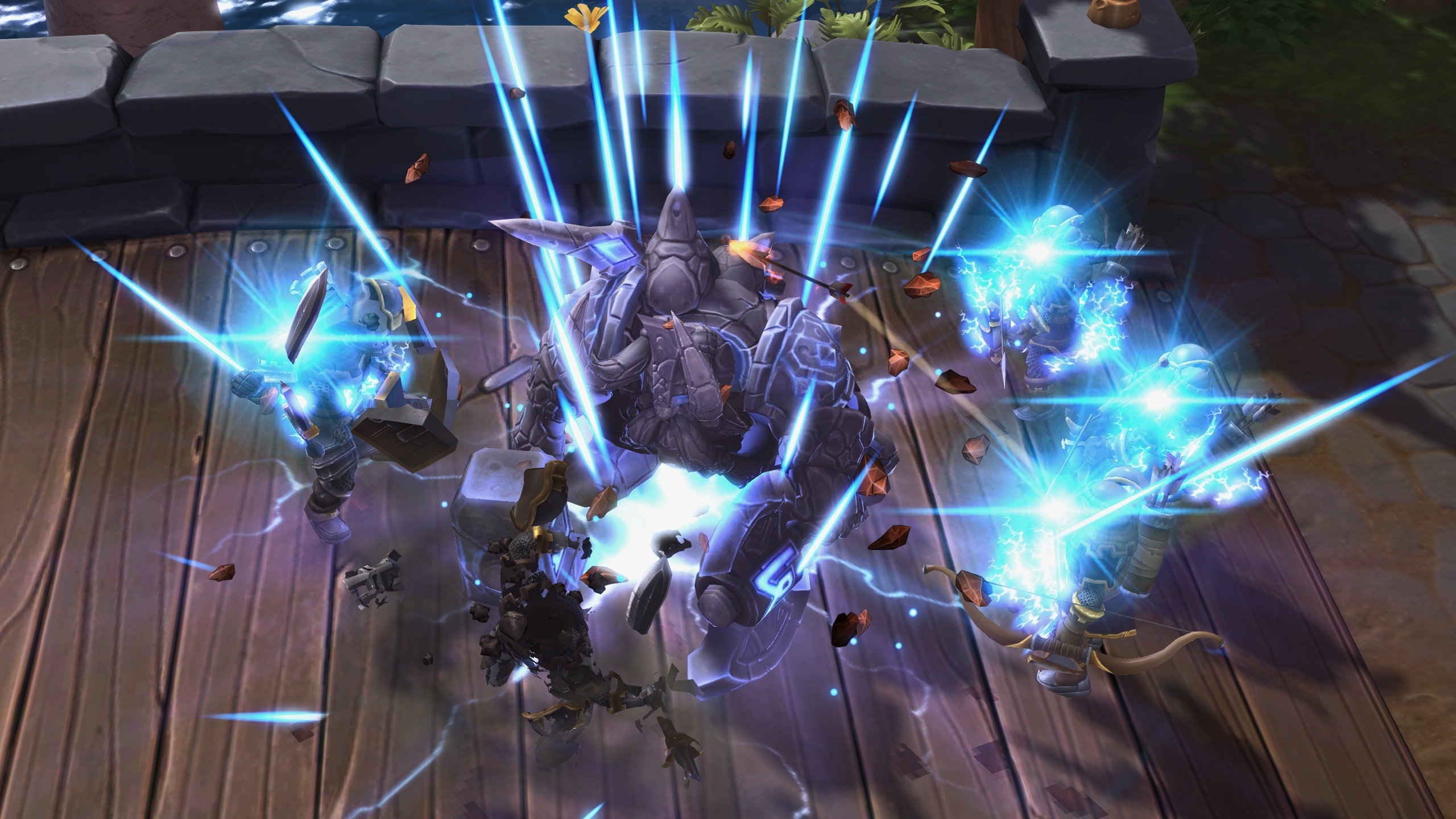 Trikslyr: Muradin is a very in-your-face kind of dwarf. He can certainly have a heart to heart, but prefers to let his hammers do the talking. Did the design team feel like they hit the nail on the head with the fantasy and lore of the Mountain King?

Richard: Alright, let's get started! We wanted players to think, “Welp, here comes the hammer,” when fighting Muradin. The Warcraft III Mountain King's signature abilities were Stormbolt and Thunderclap, which were not only elegant in design, but also really captured the fantasy of the Mountain King. It was an easy decision to port them over to Heroes. The idea of Muradin Dwarf Tossing himself in and out of combat was inspired by Gimli competing with Legolas's bow and arrow. We decided to pursue that type of playstyle because a very mobile and sticky tank contrasted the other warrior playstyles we had in the game at the time (early on it was just Muradin, Arthas, and Stitches).

We didn't stop there, though. I talked to Muradin one day, and he said he really, really wanted to do even more stuff with his hammers. So, we obliged him. We added a mini-bash to his Avatar state to give the heroic ability a little more oomph. For his second heroic, we joked about Muradin having a solid batting average if baseball were to exist in Azeroth. So, the idea for Haymaker was born. At that point, we checked back in with Muradin, and he was very pleased.

T: What are some new Talents recently added to Heroes that really allow Muradin to achieve that type of mobile, sticky warrior playstyle? Anything fun in particular you would recommend for players wanting to make the most out of Muradin?

Matthew: Early on, we were successful at creating talents that allowed Muradin to play more of a tanky warrior or shoot for a stun lock build. Going forward, we wanted to further expand on these talents, and let players try different builds that aren’t as straight forward as the two primary playstyles listed above.

With the most recent Technical Alpha patch, we focused on developing more Thunderclap talents and tuning up what wasn’t hitting the mark. Here are a few additions that came with the update:

Talents aside, we also felt that Muradin had a bit too much mana tension. This reduced the possibilities of building up a powerful Stormbolt through Perfect Storm, or using Rewind at later tiers. By slightly reducing the mana cost on Stormbolt and Thunderclap, we’ve indirectly buffed a bunch of different talents and builds for Muradin. As always, we’ll continue to monitor how our changes affect game play.

T: Let's talk about Muradin's trait: Second Wind. It seems to have been designed to allow Muradin to excel in long, controlled team fights where opponents can be worn down over time. Was this the design team’s intention? What kind of team comps will make full use of Muradin's trait?

Richard: Yes, that was the intention. We want Muradin, and to a lesser extent, all warriors, to feel like they can remain on the battlefield longer than other hero archetypes. For Muradin, we wanted the regeneration to feel strong, so we had it proc out of combat. I'm not sure  if it still needs to be out of combat, given that we have added so much in-combat sustain to Heroes like Illidan. We’ll continue to monitor how Muradin’s trait performs, and if we need to take a look at it, we will.

Muradin is very flexible in how he can be built, so many team comps work for him. He can be built with crazy HP and self-sustain, making him a great initiator. If you have a squishy team and/or you frequently find yourself fighting multiple heroes at once, he can be built to slow and stun enemies often. Try out this fun team comp: Groupies ETC, Stitches, Haymaker Muradin, Brightwing, and Sgt. Hammer. Can you imagine the enemy team getting to Sgt. Hammer, ever?

T: Muradin’s heroics allow him to be played in different ways. Are players playing the Avatar and Haymaker as they were intended? Are they any plans to tinker with the heroics, or are they in a solid state as of now?

Matt: We we’re really excited to see how players would use each of Muradin’s heroic abilities, and in which situations they would be most prominent. Currently, Avatar is the favored pick among players, but we have plans to tune up Haymaker in an upcoming release.

Haymaker’s knockback distance has been increased. We noticed it wasn’t knocking players out of combat for long enough, and because the distance was relatively short, there were fewer opportunities to knock enemies into clever areas.  We’re experimenting with playing up the ‘bowling’ aspect of Haymaker. All users will be able to get some value out of knocking an enemy hero away, but more advanced players will be rewarded for lining up the perfect shot and hitting extra enemies.

We also felt that the level 20 upgrade to Haymaker wasn’t very interesting. We’ve got some cool ideas in the works. So stay tuned!

T: Let's continue the tradition of ending with a fun anecdote! Any interesting stories to share about Muradin during his early development stages?

Matt: Muradin is one of our oldest heroes. He existed back when the game was just a mod, so he’s gone through many changes and iterations.

At some point, we decided to add traits to heroes. An early version of the Second Wind trait was active all the time; even while taking damage! I remember an internal playtest where the numbers were set to 5% health per second. What this translated into was an extremely broken playtest where Muradin was nearly impossible to kill, unless all five enemies could focus him. We agreed to not play him anymore until we could do a tuning pass on the numbers.

A huge thank you to Matthew Cooper, Richard Khoo, and the design team for taking time out of their day to chat with us about Muradin. If you missed any of our previous Developer Insights, check out the list below, and keep an eye on HeroesoftheStorm.com for more news from the Nexus.