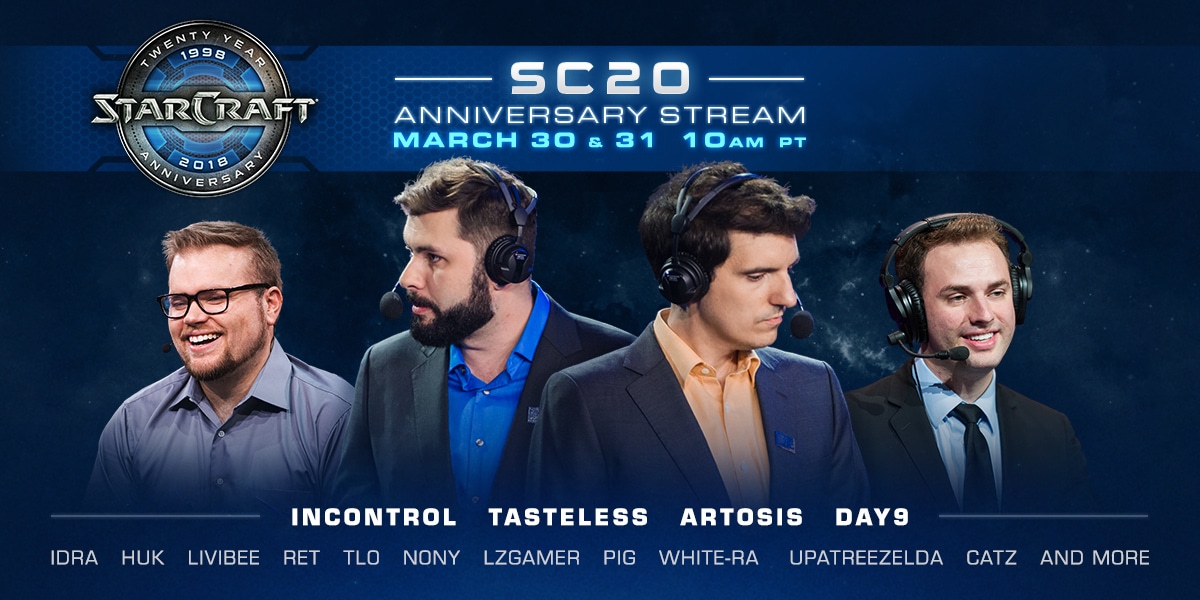 On March 31, 1998, StarCraft was unleashed upon the world. At the time, it was hard to imagine the impact it would have. Now, 20 years later, we’re humbled by its impact.

Chances are, if you're reading this blog, StarCraft has had some kind of impact on your life, and you’re not alone. For two days, to commemorate the 20th anniversary of StarCraft, we invite you to join us for a celebratory stream unlike any other!

Hosted by Sean “Day[9”] Plott, Geoff “iNcontroL” Robinson, Nick “Tasteless” Plott, and Dan “Artosis” Stemkoski, the SC20 Anniversary Stream will take us on a journey encompassing stories of days past, the competitions of the present, and our hopes for the future. There will be also gameplay, of course, representing the massive diversity ways that people have enjoyed StarCraft throughout the years, including team games, free-for-alls, 1v1, and of course. . .  2v2v2v2!

What would an anniversary celebration be without the very people who helped shape StarCraft's history? We are thrilled to have joining us a wealth of community figures from across all eras of StarCraft, including Idra, HuK, Livibee, Ret, TLO, Nony, Lzgamer, PiG, White-Ra, and UpaTreeZelda!

The show begins on Friday, March 30 at 10:00 a.m. PDT on Twitch.tv/StarCraft with a “competitive" free-for-all to get things started. From there, we'll proceed with the celebration for the rest of the day until 6:00 p.m. PDT. On March 31, the show resumes at 10 a.m. PDT and run throughout the day.

It's been a remarkable twenty years, and we're truly honored to be able to host this celebration for the game and its community. We hope that you'll take some time to tune in, recollect, and join us in thanking the game and its players for twenty years of wonderful stories and memories.