Professional StarCraft II players compete the entire year for the ultimate prize: to hold the Gosu Trophy proudly as the Global Champion at BlizzCon. For the first time ever, StarCraft II will give WCS supporters the opportunity to show off their own Gosu Trophy in the game as a portrait and Feat of Strength. 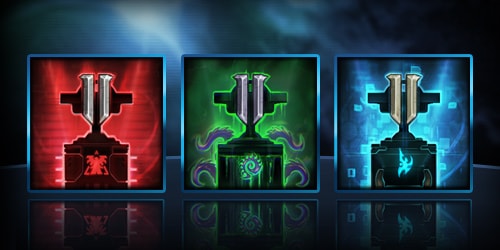 These portraits won’t be available for the next few weeks, but you can qualify for them now! We’ll be announcing exciting new ways to get these portraits soon.

Current active subscribers to the WCS America, WCS Europe, or GSL Twitch channels will be awarded this portrait. If you haven’t subscribed yet, sign up for this League Finals, and contribute to your favorite WCS region.

Portraits will be redeemed via Battle.net codes that will be sent to subscribers through Twitch’s messaging system. We will announce when codes are available through blogs on StarCraft2.com and StarCraft2.com/WCS.

WCS America and Europe will be dropping the price of the combined ticket to make it easier for you to follow your favorite pro players and get your Gosu Trophy portrait. You'll also secure special Twitch subscriber benefits, such as Collector’s Edition emoticons, a WCS subscriber icon, and access to subscriber only chat. These benefits will be active for the League Finals through the Global Finals at BlizzCon!

If you're looking to attend in person, check out our recent Arena Tickets announcement and get primed to buy your Global Finals ticket on October 7.