Tasteless and Artosis on 19 Years of StarCraft (And Counting)

As StarCraft: Remastered’s summer release approaches, nobody is more excited than Nick ‘Tasteless’ Plott and Dan ‘Artosis’ Stemkoski. We caught up with this world-renowned shoutcasting duo to discuss what StarCraft means to them—and what it means to see the game remastered for the modern age.

Can you share the Tasteless and Artosis origin story? What drew you to competitive StarCraft, and how did you meet?

Artosis: I started playing the year StarCraft came out, but just a little bit. But then I broke my ankle really badly. Back then I was really into competitive sports, and StarCraft took up that role, since I couldn’t walk for six months. I started going to tournaments . . . in 2004, I decided that this had to be my life. I came to the realization that I didn’t care about other video games; I didn’t really care about anything the way I cared about StarCraft.

I’d been sleeping through classes so I could play all night with Korean players. I’d been skipping out on obligations with my friends and family just to practice more, learn more about the game. That was the moment when I knew I had to do it.

Tasteless: I was in college, I was studying philosophy, I was probably going to go to grad school for that—or law school, or something—but I was eventually just like, $&@!, I’ve gotta get over to Korea, [where StarCraft was an established esport].

I lost to my brother, Day[9], in a 2005 tournament, and they needed somebody to commentate. So I ended up commentating my brother becoming the USA champion, and from there I got invited to Singapore, to do the World Finals there, and then I kind of just ended up landing more gigs because I was the only person doing it at the time. Eventually I got a job in Korea doing Warcraft III and StarCraft. And then Dan and me met, shortly after I got out here.

When Dan and I started working together, we figured out pretty early on that we had a sense of humor that meshed, and a shared passion for real-time strategy games. We worked on our voices and how to articulate stuff, and I think it’s fair to say that that put us ahead of everybody else.

Artosis: We’re basically the same age, we both grew up in boring areas and loved StarCraft, we had met at tournaments before Korea, so we were already friends . . . we were also the only two guys out in Korea commentating, we were out there before StarCraft II was even announced. It seemed really obvious that we should work together.

Can you paint me an image of the era when you were just scraping by, before StarCraft II came out?

Tasteless: Yeah, I’ve got an image for you, man, $&!@ing Dan’s place, in Korea—Dan was so $&!@ing poor, man, I remember going to his place and he didn’t have a second plate, so he had to get a pot lid out for me to eat off of, and we were eating a brick of tofu together, with a little bit of soy sauce he would pour on top of it— 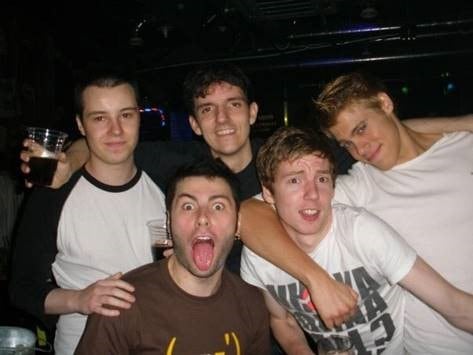 Artosis: (Laughs) That was when I started to do a little better, I think, actually—when I first moved to Korea, I lived in a pro-gaming team house, slept next to a pile of dirty clothes . . . when I came out here I actually made so little money that I had to jump subway turnstiles, because I could not spare the seventy cents. I ate blocks of tofu because they cost a dollar. I ended up losing a ton of weight because I didn’t have money for food. We were really scraping by at the start.

But yeah, as Nick said, when I did get my own place, I had one plate and one spork, and two chop sticks, and, like, a cup— (Laughs)

Tasteless: I had probably a good year of work, and then suddenly I had no money, basically became homeless, had to put all my stuff in trash bags and sleep at my friend’s house, on the floor. I did that for a long time. I was making three hundred dollars a month, or something like that . . .

Artosis: And then there was your knee—don’t forget about that debacle.

Tasteless: Oh that’s right, I broke my knee and I couldn’t afford surgery. I was walking around on crutches for three months, trying to figure out what to do, until I could borrow money, and then I got the surgery done . . . when we negotiated the contract for the first season of the GSL, I was on crutches.

Artosis: Looking back, in all the years of playing StarCraft, even with tournament wins and selling the monitors that I would win—oh, I definitely lost money on StarCraft, it was no question. But it was never about the money. Even though I described those hard times before, it did not matter to me that I had to do all this. I was so thankful to just be able to live StarCraft—I was grateful for every moment.

Tasteless: We just love the game. It’s still so important to us. Today, Dan and I both have big, nice apartments in a very cosmopolitan city, we’ve been able to travel around the world, we have very good lives from it—but yeah, I would say, 85% of our time with StarCraft, we were struggling to survive. 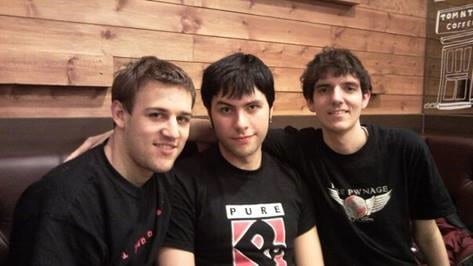 I don’t know if you remember this, Dan—back then we were so poor that if we went out, it was a fairly special night. If we went out drinking, it would be drinking outside the 7/11—which you can legally do, you get a little plastic table and sit out there—but I remember we were so broke, Dan, you were like, “We need to make money, man.” (Laughs) “We need to make some money.”

Artosis: (Laughs) I remember one of those nights, when we were sitting around talking, I was like: one day, I want to be able to just, if I feel like it, go eat Indian food. I’m a vegetarian, and it’s really hard to eat in Korea. Indian food was like thirteen bucks, and that was something I just couldn’t afford.

Where do you think StarCraft: Remastered might fit into the esports ecosystem?

Artosis: Brood War is already back. There are so many people in Korea hyped and watching it all the time, our studio is filling up, the game is still widely played . . . and Remastered is going to cement and help it grow even more.

Tasteless: There’s no reason that there shouldn’t be a Western scene. And in Korea, it seems like it’s just immortal. It just refuses to die. Unfortunately, the internet seems to be convinced that only Koreans like this game, and I’m like gosh, I don’t know . . . I remember working at WCG, and they just told me, straight to my face, that nobody but Koreans will ever appreciate StarCraft. And then, lo and behold, GSL Code S comes out, it blows up, it’s just huge . . . I’m pretty confident that with StarCraft: Remastered, there’s a big opportunity there as well.

Dedicated fans sometimes go so far as to call StarCraft: Brood War a “perfect” game. Would you agree with that? 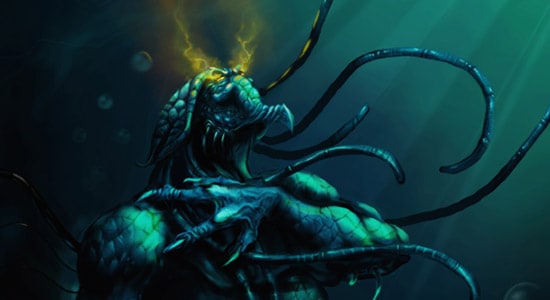 Rock and Roll Days of StarCraft

Artosis: I think that perfect games probably can’t exist, but StarCraft is pretty much as close as we can get. The fact that we’ve had a consistently changing, evolving metagame, with champions of every race, and it hasn’t been patched in eighteen years—the game is basically perfect, and if it has little flaws, those give it flavor, in a way.

Tasteless: The thing about StarCraft is that even the very best players in the world still have idle SCVs. It makes every game a snowflake—even when players do the same strategies, you can end up with different results.

Artosis: It’s like one of those Dragon Ball Z fights, where the power beam keeps going back and forth, and you’re never sure who’s going to win. Just two players muscling back and forth all game long.

Tasteless: The truth is that it’s the hardest game that’s basically ever been made. It’s just really, really hard to do everything. I think that’s one of the reasons Koreans are so fascinated with it—because in Korea everybody played it in PC Cafes, so they’re fully cognizant of how difficult it is. When professional players do these crazy strats and fake people out while still executing the mechanics so well, it’s really exciting to see.

Do you worry that the difficulty will keep the game from appealing to casual players?

Artosis: Not really. Everyone plays sports and they’re nowhere near the pro level at that. Just because you can’t dunk a basketball doesn’t mean you won’t shoot some hoops. Even though this is such a ridiculously hard game to play well, you can always find someone of your level to play with, and it’s still going to be a lot of fun, even if you’re not Michael Jordan or Flash.

It’s hard to be the best at any competitive game. Do you think Brood War is actually harder than other multiplayer games, or is its difficulty just more obvious?

Artosis: Yeah, I guess a lot of other games are more like bowling—you can roll a ball down a lane and hit some pins, so maybe you think you’re okay. Whereas StarCraft would be more like archery, or something? If you’re not hitting the target, you know you suck. It’s just that mechanical. I definitely think that players are more aware of how bad they are at Brood War than how bad they are at a different game—even if they’re equally bad at both.

Why do you think so many top StarCraft players were able to switch to playing poker professionally? At face value, the games don’t appear to have that much in common.

Artosis: I mean, there are aspects you can draw from both, where you’re hiding information and stuff like that—but I think there’s a bigger point, which is that if you can get good at StarCraft, you can be good at absolutely anything.

What would you say to somebody who is intimidated by StarCraft: Remastered’s difficulty?

Artosis: You get so much satisfaction when you start to do anything right in StarCraft . . . it gives you this amazing, accomplished feeling. Yeah, it sounds intimidating, but give it a try! There’s a reason why this has been around for forever, and it’s not going away. 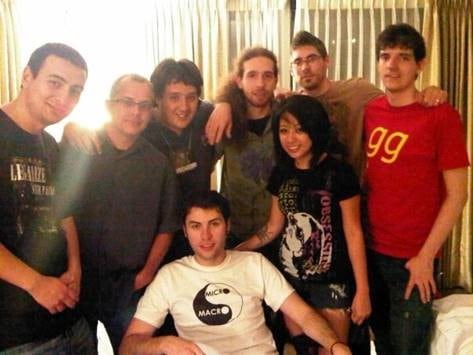 Tasteless: I lived with two roommates when I was in college. They would watch me play StarCraft, and eventually they were like “I wanna learn this game, this looks cool.” So they would play against each other, and one guy couldn’t macro, he would always have 3,000 minerals, he was on two bases and teching to Carriers or whatever—and my other friend, he could kinda spend his money, but he didn’t get what he had to do, or why—and I would watch them play, and honestly those were some of the most fun games I’ve ever seen.

I think this is where the excitement in Korea came from—watching people of all levels play in PC cafes and eventually on television. It’s just— (Frustrated noise) It’s okay to not be the best at something, you know? You can still enjoy it. If I go play pool with Dan in a bar, it’s not like “this game sucks” because I’m missing the ball every once in a while.

It’s like somebody saying “I don’t wanna work out because I’ll never be as ripped as Arnold Schwarzenegger.”