The Nexus. A trans-dimensional arena where epic heroes from across Blizzard’s game universes do battle! In our second issue of Core Concepts we cover some battleground basics, and will touch on the following topics:

If you haven’t already done so, we encourage you to download the game and check the tutorial out. The experience you earn there, coupled with the information we’ll provide in this series will help to offer you the confidence necessary for achieving victory in battle!

THE IMPORTANCE OF MAP AWARENESS

Simply put, map awareness in Heroes of the Storm refers to the degree to which a player is aware of what’s going on throughout the battlefield through information gleaned from the minimap, which you can find in the lower-right corner of the screen. In addition to providing you the location of your own teammates, the minimap will reveal opponents’ positions while they are visible to your team. It will also indicate when objectives and Mercenary Camps are available, and the status of all fortifications.

By regularly keeping an eye on your minimap, you are in a much better position to make informed decisions about where you should be focusing your efforts. Are there three enemy Heroes visible on the other side of the map? Maybe it’s time to team up and take down that half-health enemy fort.

Being armed with the information from the map is one significant component to congealing the efforts of your team, but it’s just as important to communicate that information back to your team. In addition to team chatting via text (Enter key), you can press ALT or G + left-click to issue ping notifications to your team. If no direction is pulled, then the ping command will respond contextually to what is selected. For example, if you ping a teammate, a message will be generated for your team that you wish to lend that hero assistance.

If you hold the ping button and left-click, then pull with the mouse – you will be provided a radial menu that allows for ‘defend’, ‘danger’, ‘on my way’, and ‘assist me’ notifications. Additionally, pressing V + left-click will issue a retreat ping to the point selected. These pings are simple and easy ways to help let your team know what your focus is, or where they should steer clear from. 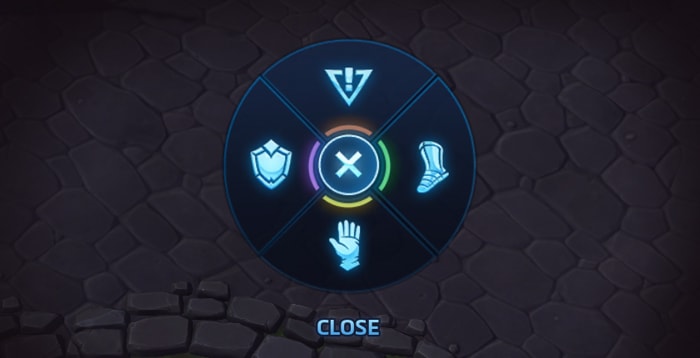 As you are communicating, try to always stay aware of where your team is and where you might be most effective. At a moment’s notice, you may see an opportunity to turn the odds in your favor, or spot a teammate in dire need of your immediate assistance. As ever, having a strong map awareness is the difference between fighting alone and working with your team as a cohesive unit.

From levels 1-10, it is crucial to harvest as much experience (XP) as possible from the incoming waves of minions who advance from the enemy Core across the battlefield’s lanes. This early portion of the game is an extremely critical time, as the first team to reach level 10 will unlock their Heroic Ability.

It should also be noted that XP from downed minions is acquired so long as a Hero is within the general vicinity (approximately within vision range) of the defeated unit. This should prove helpful, especially for heroes who are soloing a lane that need to temporarily retreat to the safety of their own fort during an ambush. Heroes that have more survivability (ex: Sonya, Dehaka), or those who can apply global pressure through abilities that will let them quickly traverse the battleground (ex: Brightwing, Falstad), are great considerations for lanes that may need to be soloed.

Roaming refers to another strategy where instead of a focusing on a particular lane, one or more allies actively scout for easy enemy Hero kills and siege opportunities. While roaming, Heroes can hide in vision blockers, such as bushes or vents, to obscure their presence from other players until they strike. This is an especially effective strategy for capable assassins with great burst damage, who are hoping to surprise players who have wandered too far into enemy lane territory.

Towers, Forts, and Keeps give large amounts of XP when destroyed. Look for opportunities to safely bring these down.

There’s no need to worry about kill stealing. Killing Heroes, capturing Mercs, and destroying Structures will always grant XP to your team, no matter who landed the final blow. However, do keep in mind that your team will miss out on minion XP if no ally Heroes are in range when they die.

Look for opportunities in lane to deny your opponent Regen Globes (dropped by caster minions in the center of a minion wave) when they’re low on health and mana, or punish your opponent if they extend too far to grab one.

USING THE MAP TO YOUR ADVANTAGE: OBJECTIVES & MERCENARIES

Battleground objectives are central points of conflict, where teams create advantage and opportunity for themselves. Whether it’s the Raven Lord’s Curse, which greatly weakens your opponents’ minions and structures, or cannon fire from Captain Blackheart’s ship, objectives shouldn’t be disregarded.

The objectives are powerful assets that can help a winning team to bolster its lead, or offer a team that’s trailing an opportunity to catch up. As they are so important to the course of battle in the Nexus, objective locations are typically where you’ll find team fights happening. Make sure to listen for objective callouts from Battleground announcers, and keep an eye on your minimap to spot their locations.

For a brief overview of all the different Battlegrounds and their objectives, we encourage you to check the following guide.

Sometimes, it makes more sense to give up an objective if your team would be at a talent or player disadvantage during the fight. Instead, consider using this opportunity to gain some experience or capture camps uncontested.

In certain Battlegrounds like Hanamura and Towers of Doom, the objectives are essential for teams to bring down the enemy core, which cannot be assaulted otherwise.

Most Battlegrounds feature powerful, neutral creatures, known as Mercenaries. These Mercenaries can aid your team by advancing down the lanes and attacking minions and fortresses, and there are yet other kinds of helpful Mercenary Camps which offer different bonuses.

Mercenaries, such as Siege mercs, Bruisers, and Bosses can help sow confusion for the opponent when objectives become available. Timing a Mercenary assault in this way will give pause to enemies who will then need to choose between clearing the incoming Mercenaries, or contesting the objective. Additionally, splitting the opponents’ defenses can help in a big push against opposing fortifications, as well as give your team more vision, and more control over the map.

Mercenaries are not won by simply defeating the camp. You must stand uncontested for a few seconds on the beacon that spawns after clearing the neutral mercs. If you don’t, a keen opponent can steal the camp away from your team.

When capturing a Bruiser Camp, kill the Wizard first. He deals the most damage and has the lowest health.

Defeating a Mercenary camp in the Hanamura battleground can yield dragon spirits which seek out enemy heroes, turrets for gunning down the enemy, or healing pulses which can restore the health and mana of your team.

MAY YOU BE EVER VICTORIOUS

Thanks for checking out this second installment of Core Concepts! In case you didn't get a chance to check the first installment, you can find our Core Concepts introduction here! As we continue to publish more in the series we hope you’ll continue to provide feedback about what you found helpful, and what you’d like to see more, or less of. As ever, we wish you glory in battle – and more importantly, that you have a blast while achieving it. Until next time, we’ll see you in the Nexus!