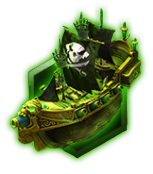 We just announced our biggest giveaway in Heroes of the Storm history to date: The Nexus Challenge! Starting November 15* until January 4*, you and your friends will be able to unlock an epic set of in-game loot in both Heroes of the Storm and Overwatch just by playing Heroes together.