We just released a new patch for Heroes of the Storm, which brings a new Hero, a new Battleground, User Interface improvements, and many balance changes to the game. Check out the patch notes below. 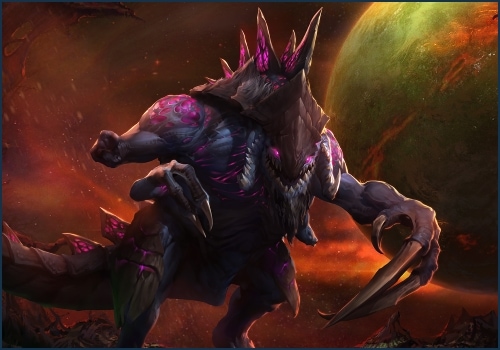 Lost Cavern, a new Battleground featuring just one lane —and a whole lot of team fighting— is now available for play exclusively in Custom Games!

Dehaka, Primal Pack Leader, has been added to Heroes of the Storm and is now available for play! Read on for a brief overview of his Abilities.

“On My Way” Ping Pathing Lines

Developer Comments: We want to encourage players to be really aggressive and feel like they can tank shots from Forts and Keeps when piloting the Dragon Knight. The Attack Speed slows from these Structures were discouraging players from tanking the structures, and often led to a Dragon Knight having less than the desired impact.

Developer Comments: We don’t like the common (and, usually, optimal) gameplay tactic of playing hit-and-run with the Garden Terror. Chasing it as it ran between lanes dropping Overgrowths wasn’t enjoyable for the defending team, and didn’t fit the spirit of what the Garden Terror was intended to do. The new functionality attempts to create a larger “moment” when Overgrowth is placed, as it gives a huge bonus—provided the Garden Terror can attack—and also makes killing the Overgrowth a bigger deal. Overall, we think Garden Terror combat will be more interesting and tactical.

Developer Comments: We want to improve counter-pick talents like Block that are meant to be strong against certain hero types. We’re hoping that these kinds of Talents will have a more meaningful impact in games in which they are picked, and that there are more situations where the enemy team’s composition drives intelligent Talent choices.

Other effects similar to Block have been evaluated on a case-by-case basis for all Heroes, with some gaining increased Block damage reduction, while others stayed at 50%.

Developer Comments: Similar to Block, Dampen Magic is the first of many efforts we will be making to create more meaningful counter-pick Talents (in this case, against spell casters). We found that the original iteration of Dampen Magic did not truly fulfill its purpose of mitigating spell damage due to how many spell effects are done with incremental damage. This buff should make the Talent more universally viable against enemy spells.

Developer Comments: Illidan has had many problems with his Talent tree that have often led to one viable choice at each tier. The goal of the Talent system is to provide meaningful and tactical decisions, and this just hasn’t been the case with Illidan. His new Talent tree puts damage, survivability, and utility options within their own tiers, and allows you to customize how you want to do those things based upon your opponents and your preferred playstyle.

We also wanted to really embrace the skill cap required to play Illidan while not making him too difficult to pick up and learn. Some of his Talents are now harder to pull off, but offer much higher bonuses if you’re able to use them effectively. If those aren’t for you, then you can always pick the Talents that are more consistent and easier to use.

Finally, we buffed Illidan’s base kit to make up for losing some of the Talents that he was previously relying on. Overall, we think Illidan is now a lot more fun to play, and that you won’t know exactly what your Talent build will be until you’re in a game.

Developer Comments: We’ve removed Bolt of the Storm from Jaina because it overcame a core weakness of hers that we think is essential to maintain: her lack of mobility. While there was always the potential for big plays with Bolt, we found that it was more often used as a “get out of jail free card” that helped make up for sloppy positioning after reaching level 20. We’re in the process of evaluating whether or not Bolt should be available to a number of Heroes, which is why it was also removed it from Kael’thas in this patch.

This doesn’t mean that no burst Assassins should have this type of mobility; it’s part of Li-Ming’s core gameplay design, for example. For the types of ranged Heroes for which Bolt is appropriate, we balance around their mobility. For Jaina and Kael’thas, however, we think removing Bolt and compensating them in other ways will result in healthier gameplay and Talent diversity.

Developer Comments: Kael’thas has had a lot of problems with his Talent pick rates. Chain Bomb has also evolved into a core part of the fantasy of playing the Hero, but was tied to a level 13 Talent. We decided to embrace this aspect of Kael’thas while introducing more counter-play to how he explodes Living Bomb so that it’s less frustrating to play against. Kael’thas should now be very effective at punishing enemy teams who clump together.

We also added many Talents to promote Flamestrike as his primary source of damage, as well as a few higher skill-cap Talents which allow players to better show off their mastery of the Hero.

All of this power comes at a price, however, and for Kael’thas it’s his survivability. He no longer has access to Bolt of the Storm, and Arcane Barrier’s Shield amount has been lowered and tied to a quest on Mana Addict. While Kael’thas can dish out a ton of damage in teamfights, he should be a much more viable target for enemy teams to focus down.

Developer Comments: As you might have noticed from our numerous Lamb to the Slaughter changes over the past year, we have been trying to create rule-sets that make this Heroic work the way we envisioned it. Every time we solved one problem, another one would pop up. After many long discussions about the proper use-cases and our intended design, we decided to make this ability a little bit meaner toward the intended target, while still allowing some counter-play through Talents and abilities that grant Unstoppable.

Developer Comments: When we approached Tychus, we noticed that he had a lot of generic Talents that were underutilized and failed to push him into a unique role. He could essentially overlap with several other ranged assassins such as Valla, and so we wanted to differentiate him through new Talents and a redesigned Trait. We decided to make his Trait an active ability, since it allowed us to be more aggressive with tuning it as compared to a passive Trait. A core part of Tychus’ gameplay now centers around his effectiveness against targets that have a lot of Health.

As part of this update, we made an effort to pit Talents with similar uses against one another so that players aren’t focused on going down a single build path, such as picking every survivability option.

Developer Comments: One of our major goals with these changes was to make our favorite one-man wrecking crew the premier zone-control Hero in the game, and we feel that his new Talents help push him in that direction. Gazlowe now has three playstyles that he can build around with his Talent tree: Rock-it! Turret, Deth Lazor, or Xplodium Charge.

The buff to base Turret range should help him a lot in this regard, as he is much more effective during the early stages of the game. He can now also be a big threat if he can set up at an objective before the enemy team arrives.

We also took this opportunity to remove a lot of generic Talents and replace them with much more interesting ones--like, ya know, the ability for Turrets to shoot friggin’ lasers!

Developer Comments: We started these changes off by looking for a more exciting Heroic ability for Sylvanas. After many iterations, we think we finally found something that can compete with Wailing Arrow. We’re excited to bring Mind Control to the Nexus, which will allow Sylvanas to ruin an enemy’s positioning while possibly sacrificing her own to do so.

Given its gravity, this change quickly led us down the rabbit hole of trying to fix her Talent pick-rates, so we took the opportunity to look into those while applying some of our newer Talent tree design philosophies. After the dust had settled, we realized our changes were going to remove a bit of the damage offered by her popular build paths, so we decided to increase her Basic Attack and Withering Fire damage to help even things out.

Developer Comments: Nydus Network has been in a tough position for a long time. We realize it is pretty difficult to compete with Devouring Maw, which is an incredible team-fight Heroic. Zagara may also have bigger changes coming Soon ™. The current set of changes are intended as quality-of-life and usability improvements for Nydus Network. We will be keeping a close eye on these changes, but we are also excited to see if they can potentially open up some new play-styles for our wonderful Creep Queen.