"The Hour of Twilight is at Hand"

Cho’gall is the ogre-magi chieftain of the Twilight’s Hammer clan, a member of the Shadow Council, and the first cooperative Hero to be added to the Nexus. (The first! First!)

Players who choose to play as Cho’gall will find a unique Hero - the first to be controlled by two players. One player will control Cho, a melee Warrior responsible for Cho’gall’s movement. Another player will control Gall, a ranged Assassin who works in unison with Cho by casting damaging spells to bring down their enemies.

Cho is the brains of the operation (nuh-uh!), and players who control Cho will need to be careful to avoid sticky situations as two players’ lives are on the line. Cho is not to be taken lightly however, as he is a strong melee bruiser capable of dealing considerable damage.

Surging Fist is a massive wind-up punch that sends Cho'Gall dashing ahead and knocks aside any enemies hit. Your Consuming Blaze ability is an area of effect explosion that deals damage over time to affected targets and also heals you over time. Rune Bomb is a skill-shot that damages all enemies in a line, and Gall can detonate the bomb to deal area damage.

To improve Cho's abilities as a front-line bruiser, the Hammer of Twilight (the Hammer of Twilight!) ability empowers basic attacks and adds a cone-shaped knockback attack. If you’d rather set up Gall for big plays, then Upheaval will pull enemies in and slow them so Gall can finish them off.

Gall is immune to Silence and Stun effects, which means that it’s very hard to keep him from dealing damage. And while Gall can’t mount up like Cho, using the mount button (default: Z) will activate Hurry Up, Oaf, a temporary speed boost for Cho that also lets him pass through other units (Insects! Weak and small!).

Gall’s primary ability is Shadow Flame, which damages enemies in a narrow line. Dread Orb is a ball of energy that bounces three times in a line, damaging any enemies it hits. A well-coordinated Cho and Gall team will focus on detonating Cho’s Rune Bombs to deal significant area damage.

The Twisting Nether Heroic ability slows nearby enemies in an area while you channel a massive explosion, dealing significant area of effect damage (the darkness comes!). For more targeted destruction, Shadow Bolt Volley releases a channeled barrage of shadow bolts wherever Gall is aiming.

For a more in-depth look at this unique Hero’s abilities, go this way (no that way!) to check out the Hero Page and spotlight video. 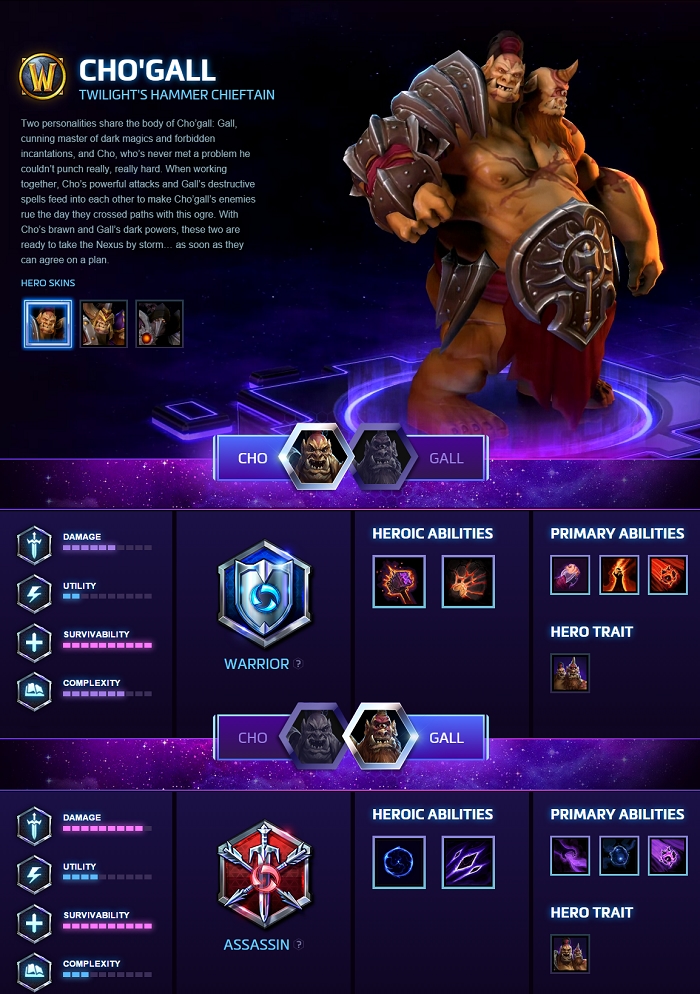