Our Blizzard Preview: Hearthstone, Overwatch, and Heroes of the Storm Panel and Livestream at PAX East 2015 has just concluded. In case you missed it, we're excited to share some of the latest Heroes of the Storm updates with you, straight from Boston!

During the panel, Game Director Dustin Browder took the stage to discuss the Closed Beta and some of the changes we’re planning for Open Beta, leading up to launch. If you’re interested in watching a panel recap, you can find it on the official PAX Twitch channels.

The brawls have been coming fast and furious in the Nexus, and if you’re curious about how your favorite Heroes are faring, we have some fun stats you might enjoy. Currently, the overall win/loss percentages for our Heroes are fairly close. In fact, Diablo and Zagara are our most balanced Heroes with a win percentage right around 50%. The rest of the roster only varies from this figure by around 3%, but if you're curious, these are the current top-tier Heroes in Quick Match:

Our lowest-tier Hero is currently Chen, and going forward we may make some balance changes to bring him more closely in line with the rest of the roster.

Top-tier play is very competitive, and the winningest characters in Hero League are:

Our most balanced Heroes in Hero League are Zeratul and Valla, with the lowest-tier being Murky. As always, we plan to make balance adjustments to ensure that all Heroes are viable in their own right. 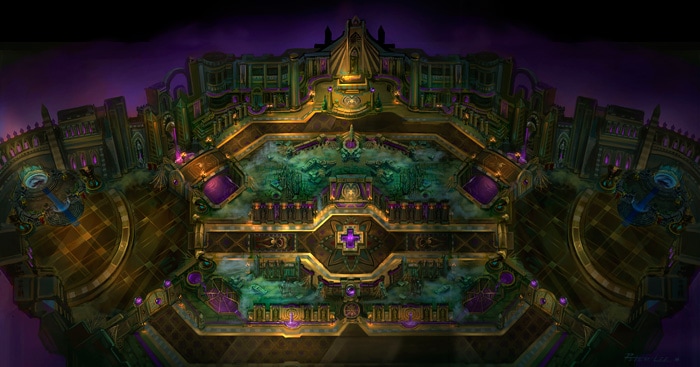 The next new Battleground coming to the Nexus is Tomb of the Spider Queen—a small map that feels like a knife fight in a closet. It’s a dark and moody interior space where you destroy enemy minions to claim the gems they drop. Turning these gems in will summon a powerful wave of Webweavers to attack your enemies. You drop any gems you’re carrying when you die, but while your enemies can’t pick them up, savvy opponents may deny your teammates the opportunity of retrieving them. Here’s a preview of this creepy crypt: 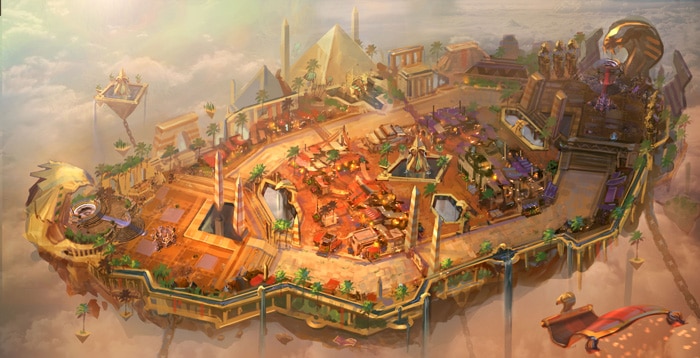 Our most recently released Battleground is Sky Temple— a very large map where most of your core objectives are outside the lanes. Teams must periodically fight to capture the ancient temples, defeat their guardians, and use their awesome power to destroy the enemy’s fortifications.

Today we also announced our next playable Hero—Sylvanas! The Dark Lady is a sneaky, evil Specialist Hero who specializes in high DPS and Siege damage, corrupting and cursing towers and minions to shut them down. Check out her new Hero Trailer below:

Eager to see what Sylvanas looks like in action? Well look no further than this follow-up video, which showcases many of Sylvanas’s unique Abilities:

First up is “Withering Fire” (Q). This ability rapidly shoots arrows at the closest enemy target for light damage, prioritizing enemy Heroes. It stores up to 5 charges and can be used while moving to quickly unleash a barrage of lethal burst damage. Targets killed by Sylvanas will replenish the ability’s charges so Sylvanas can continue to rain death upon her foes.

Next is the “Shadow Dagger” (W) ability. This ability initially deals light damage to the target and then sticks around to deals moderate damage over the next few seconds. As it deals damage, the effect spreads to nearby targets, so it’s especially useful in tightly packed groups where the effect can overtake the entire enemy force.

The third ability we showcased was “Haunting Wave” (E). This ability sends forth a wave of banshees who deal moderate damage to all targets. The ability can be reactivated to teleport to the banshees’ location for added mobility—just what a nimble ranger needs for flanking maneuvers, chases, or clutch escapes.

Next we shared Sylvanas’s first Heroic Ability, “Wailing Arrow” (R1). This ability shoots a special arrow that explodes for heavy AOE damage and silences enemies for 2.5 seconds. It’s a flexible ability that can be used to clear waves, hunt down Heroes, and interrupt their channeled abilities.


Lastly, we shared Sylvanas’s second Heroic Ability, “Possession” (R2). This ability forces an enemy Minion or Mercenary to fight for you. Targets gain bonus health and deal more damage while serving the Banshee Queen. The more powerful the target you steal, the longer you’ll have to wait to use the ability again, so there’s strategy in who you recruit. 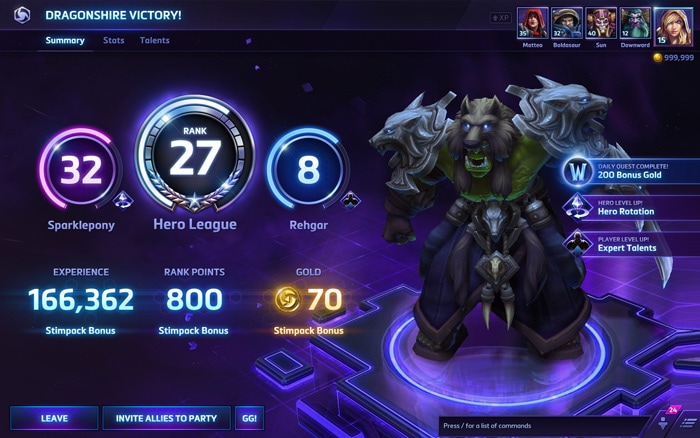 This mockup is only a representation of what the screen may look like in a future patch, and Stimpacks will not affect ranking.

We’ve been hard at work on a number of UI and game system improvements as well.

In addition to making your hard-won player portraits more prominent again, you’ll notice that we’ve cleaned up the Summary screen UI, prominently displaying your Account Level, Hero Level, Hero League Rank, and more. You can also see detailed contributions from each player in our Stats screen. 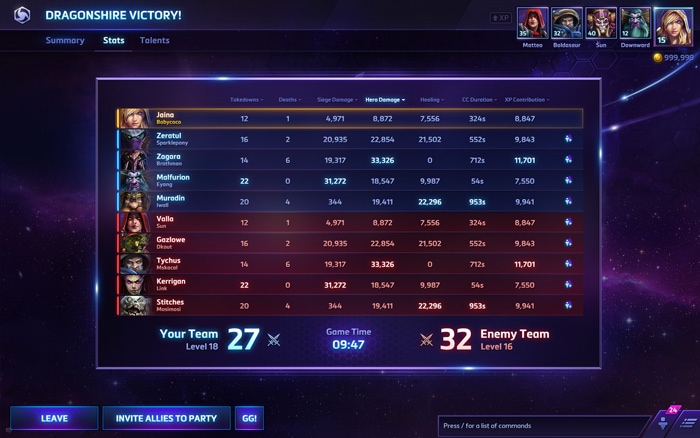 We’ve been putting a lot of work into improving Ranked Play, and in the coming months we will be offering you a closer look at Team League, which will premiere in our next major patch. In the meantime, check out the screenshot below to see how it’s shaping up! In this mode you create up to three teams with rosters of up to nine players each for 5v5 battles. Each team will have separate rankings, allowing you to take turns playing with different groups of friends. Team League is meant to be the most competitive, ultimate expression of the best players in Heroes of the Storm, and will include a prestigious Grandmaster League, much like StarCraft II. 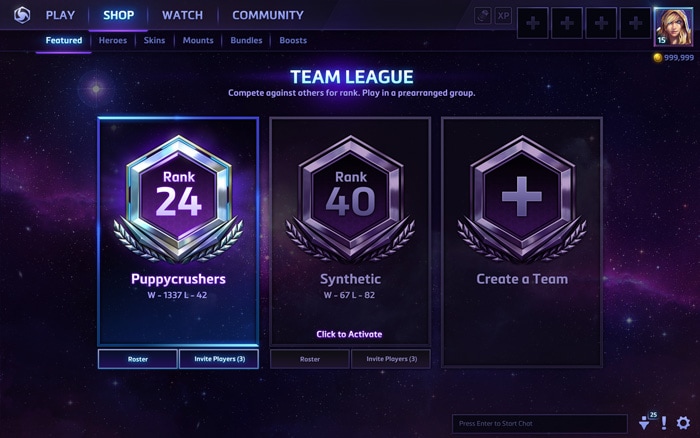 Playing nice and playing fair is important. We’re continuing to develop tools and systems that reduce toxicity so players can focus on having fun, whether they’re alone in the Nexus or playing with friends.

We also have a number of progression updates coming in future patches:

In an upcoming patch we will also be offering additional gold rewards for players as they achieve various milestones within Heroes of the Storm. All of these rewards will be retroactive as well, so if you have already achieved a certain Account Level or Hero Level, you will be granted the corresponding amount of gold when the patch goes live. Stay tuned for details!

Heroes of the Dorm

We also announced Heroes of the Dorm – the ultimate Heroes of the Storm collegiate tournament! College students across U.S. and Canada can team up and represent their school, with more than $450,000 in tuition and other prizes up for grabs. What’s more, anyone can fill out a fantasy bracket, cheer on their favorite schools, and win big. ESPN will deliver exclusive live coverage of Heroes of the Dorm competition on TV and digital platforms.

You can find out more in our comprehensive Heroes of the Dorm announcement blog and in this video below!

We'll be bringing you more updates throughout the weekend on Twitter, Facebook, YouTube, and right here on HeroesoftheStorm.com! If you're attending PAX East, make sure to stop by the Twitch.tv booth (#9044) in the Exhibit Hall to play the current beta version of Heroes of the Storm. Additionally, those of you hoping to get your hands on the latest Overwatch demo can do just that by visiting the Blizzard booth (#8116)! Check out our Heroes of the Storm PAX East Preview blog to find out about everything awaiting you at the convention from March 6–8!