"Not my battle? I don't know who ye think ye are, mister, but I've got a score to settle with Arthas and yer not getting in me way!"

Once a mentor to Prince Arthas, Muradin was unable to prevent him from becoming the Lich King. Muradin hails from the Warcraft universe, and has traveled far and wide across Azeroth. In Heroes of the Storm, Muradin takes on the role of a durable Warrior who excels at diving into the heat of battle and disrupting enemies, while protecting teammates. This fearsome dwarf will fight beside you until his last breath, and he’s just the Bronzebeard you’ll want by your side as you brawl in the Nexus!

During the Second War, Muradin served as an official liaison between Lordaeron and Khaz Modan, and in time grew close to the Royal Family. As Arthas grew up, Muradin took it upon himself to teach the young Prince all he knew about fighting, and the two became close companions.

As Arthas began to slip into madness while in pursuit of the cursed sword, Frostmourne, Muradin pleaded for the young prince to listen to his counsel as he had so many times before, but Arthas refused to listen, and Muradin became Frostmourne’s first victim at Arthas’s hand. After recovering from a mild case of amnesia, he is now the representative of the Bronzebeard clan for the Council of the Three Hammers since the “diamond-ization” of his brother, King Magni.

For an even more in-depth look into this steadfast dwarf and his abilities, make sure to check out Muradin’s Hero Page!

"This is my hammer. There are many others like it, but this one is mine."

Muradin may not have a tall stature, but his starting skin in Heroes of the Storm is ready for whatever the Nexus can throw at him! 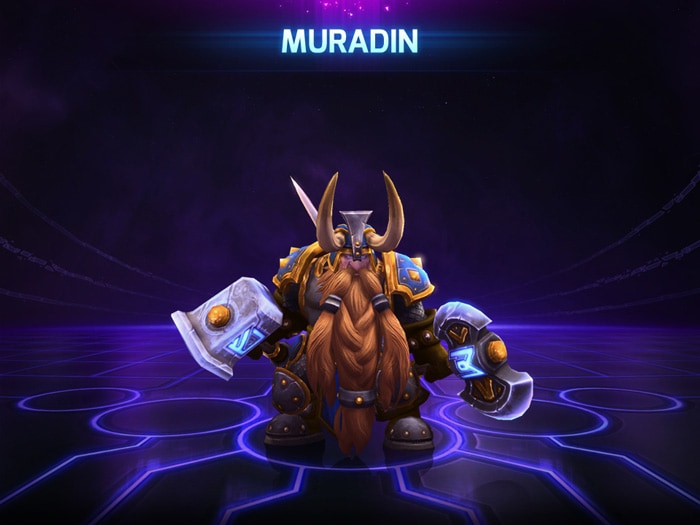 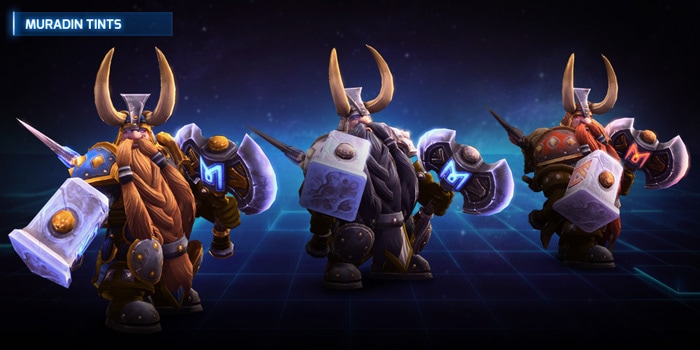 The newest Muradin alternative skin we're revealing is one that brings pride to the longstanding Bronzebeard name. 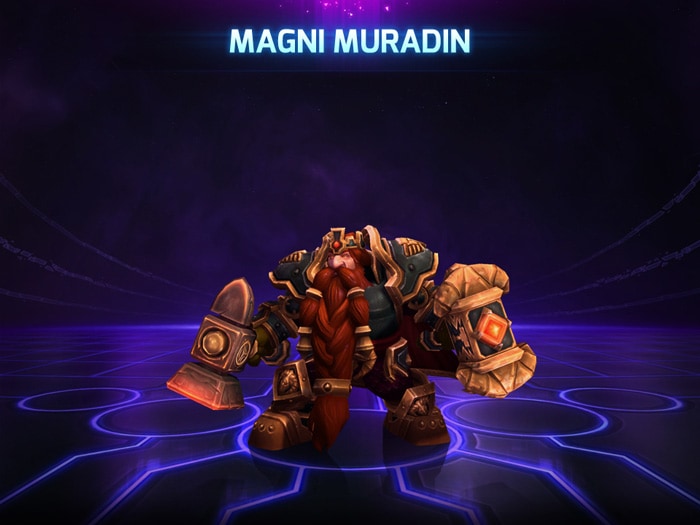 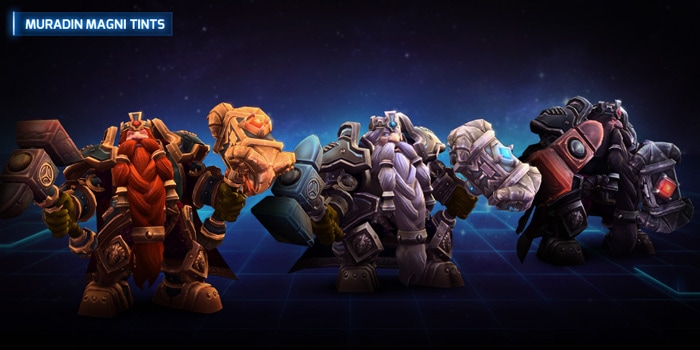 "Nobody tosses a dwarf!"

While they don’t hail from Azeroth, the first dwarf-like characters to appear in a Blizzard game were Erik the Swift, Baleog the Fierce, and Olaf the Stout: the Lost Vikings (1992)!

The mighty dwarves have long been key players in Azeroth’s history, and their first formal appearance in the Warcraft universe was in Warcraft II: Tides of Darkness. The Bronzebeard brothers themselves were introduced in Warcraft III: Reign of Chaos (2002).

During the events surrounding Warcraft II: Tides of Darkness and the Second War, King Tereneas Menethil II managed to gain the allegiance of various human kingdoms as well as the Bronzebeard Dwarves of Ironforge, the Wildhammer Dwarves of Aerie Peak, the Gnomes of Gnomeregan, and the high elves of Quel’Thalas. Together the leaders of the seven human kingdoms and representatives from Khaz Modan and Quel’Thalas would come to form the Alliance of Lordaeron.

During the Second War, Muradin served as an official liaison between Lordaeron and Khaz Modan, and in time grew close to the Royal Family. As Arthas grew up, Muradin took it upon himself to teach the young Prince all he knew about fighting. The two became close companions until Arthas became corrupted by Frostmourne and took up the mantle of the Lich King

Arthas was blinded by revenge, and although he knew that there would be a terrible price if he took up the blade, he did it anyway. When he did, the blade’s curse unexpectedly struck down Muradin. Arthas believed his friend to be dead and left to take on Mal’Ganis.

Unbeknownst to Arthas, however, the blow to Muradin had not been fatal. It had instead stricken him with total amnesia, and he was later taken in by a group of Frostborn dwarves. In time, he was given the name Yorg Stormheart, after a legendary Frostborn warrior, and would become King of the Frostborn.

To avenge Muradin, Magni forged the Ashbringer to oppose Frostmourne, Arthas, and the undead.

Through a quest chain in World of Warcraft, players were able to discover the secrets behind Yorg Stormheart’s true identity, and assist with reuniting Muradin with his brothers Brann and Magni Bronzebeard.

In the prelude to the Cataclysm, King Magni Bronzebeard believed a mystical tablet created by the ancient Titans would make him "one with the mountain" and this would help him ease the troubled, earthquake-stricken lands. Unfortunately, “one with the mountain” was more literal than anyone could have expected, and when Magni activated the tablet, it unleased a terrible curse that fused his statue-like form into the diamond heart of Ironforge.

In the aftermath of this tragedy, the ruling body of the Council of Three Hammers was formed to reunify the dwarven clans and to give them representation in Ironforge. The Bronzebeard clan would come to be represented by Muradin, the Wildhammer clan by Falstad Wildhammer, and the Dark Iron clan by Magni’s daughter Moira Thaurissan.

Brann Bronzebeard is brother of King Magni Bronzebeard and Muradin Bronzebeard. He was one of the founders of the Explorers’ Guild, and is considered to be one of the greatest explorers, anthropologists, archaeologists, and linguists to ever wander Azeroth.

If you own the Magni Bronzebeard skin for Muradin, your "Avatar" [R] ability will have a diamond appearance!

Since the first appearance of the Bronzebeards in Warcraft III: Reign of Chaos, many talented artists have sought to illustrate these brave and iconic dwarves. Below are six fantastic pieces of fan art featuring Muradin Bronzebeard and other dwarves, which were submitted by talented artists from around the globe.

The Bronzebeard clan and their dwarven bretheren have had a longstanding history within the Warcraft universe, and their participation in various battles and notable events have shaped Azeroth’s past and present.

For many long centuries, three dwarven clans— the Bronzebeards, the Wildhammers, and the Dark Irons— lived united in Ironforge under the wise rule of High King Modimus Anvilmar. When Modimus passed away from old age, tensions boiled over among the clans, and war erupted for control of the city.

Thus began the War of the Three Hammers, a savage conflict that raged for many years, during which time the Bronzebeard clan won sole ownership of Ironforge and expelled its rivals. The war severed relations among the clans, and they went on to forge new destinies apart from one another.

If you’re interested in learning more about Muradin, Magni, and other dwarves, make sure to check out the following related content:

You can check out some official art and screenshots featuring Muradin, Magni, and other dwarves below: 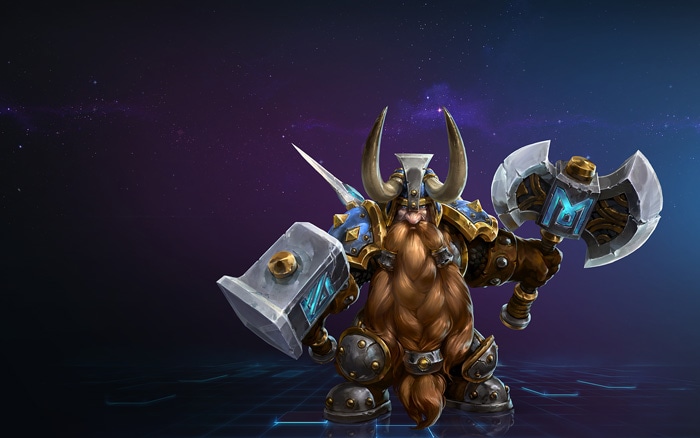 "Hi, Arthas. Remember me? We have unfinished business."

We hope you’re enjoying our lively Muradin week! What’s been your favorite part so far, and what else would you like to see? Let us know in the comments below!