Since we last gathered for a Diablo Immortal Content Update, many players have seen Sanctuary anew through Character Transfer, climbed the ranks of the Season Six Battle Pass, and harnessed the power of the 36 new Legendary items to achieve glorious new feats.

This Content Update details when the Server Merge goes into effect, and how specifically it functions. We also have a variety of feature updates to introduce that further iterate on some of Diablo Immortal’s systems. Kick back, grab a beverage, and let’s dive in!

As with previous Content Updates, there will be server maintenance starting on November 8, from 4:00-6:00 p.m. PST for Oceania, China, East Asia, Southeast Asia, and Europe Servers, and on November 9 from 12:00-2:00 a.m. PST for servers in the Americas. After the maintenance has concluded, all items mentioned below will be live—specific dates for any content going live afterward are provided below.

Following Diablo Immortal’s scheduled maintenance on November 9 at 3:00 a.m. server time, we will be merging the populations of select servers. This change is being made so players will have an easier time finding other players to party up with regardless of the server they play on. We will continue to monitor player populations on all servers and merge additional servers as needed. At this time, we cannot say when additional server merges will occur, but we will keep players updated. Here’s a complete list of all servers that will merge in this wave:

This is a big change for everyone, and we understand that you may have questions regarding what you must do if you’re playing on a merging server or how your gameplay experience might change. Here’s how Server Merge will specifically work for players—please note the below only applies to players on a merging server: 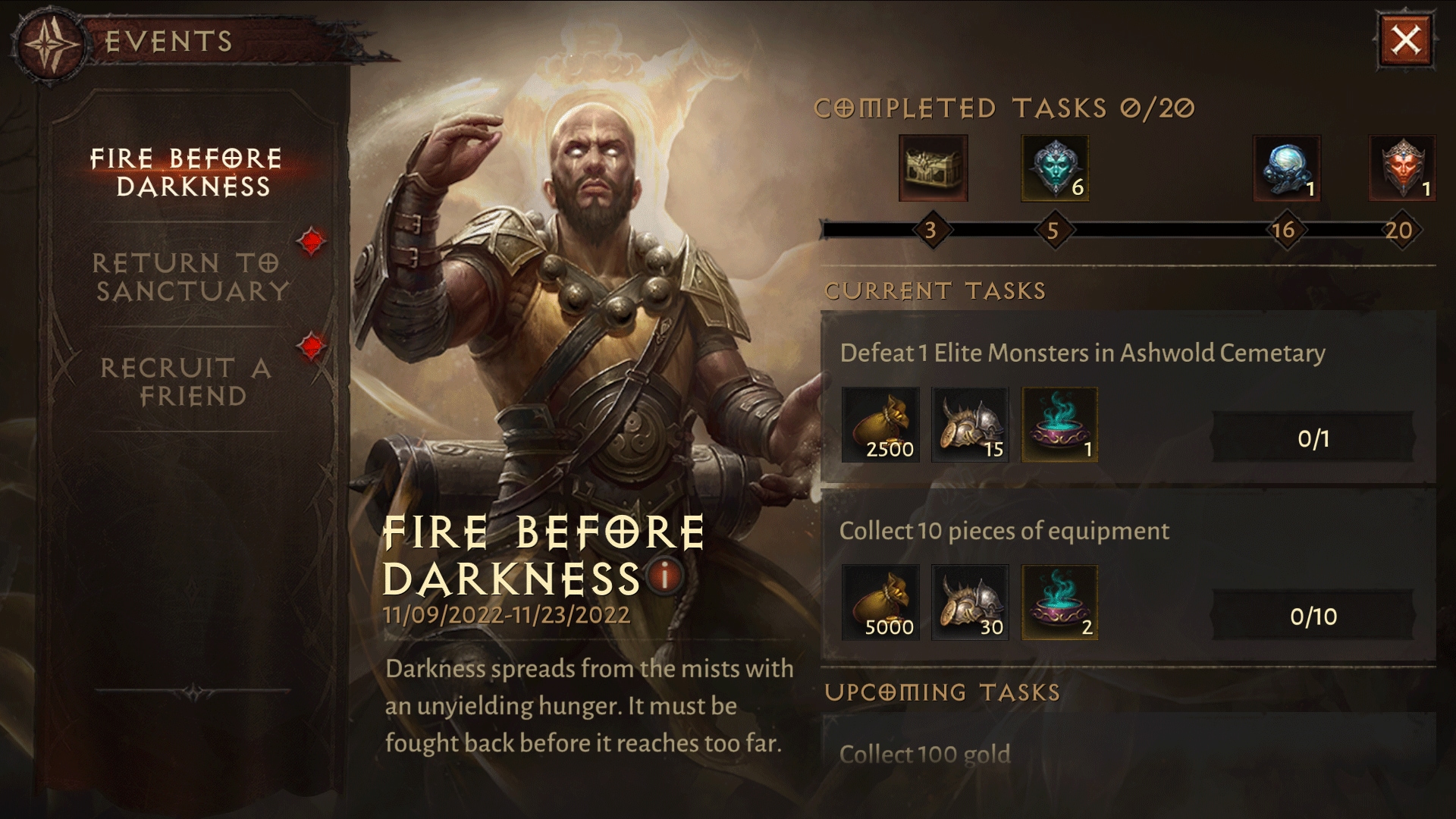 There are few in Sanctuary capable enough to stand against the darkness and wager their life for the defenseless. But you, adventurer, have consigned your days to thinning out the ranks of the Burning Hells, ushering in safety where all hope was once lost. Your quest to serve the downtrodden grows in complexity—harness the fire within to contain ever spreading darkness.

From November 9 at 3:00 a.m.–November 23 at 2:59 a.m. server time, as you complete daily Fire Before Darkness tasks, you’ll receive various rewards for your heroics. Racking up enough completed tasks will also unlock milestone rewards for you—an ode to vanquishing countless demons.

There’s another world hidden below the waterline. Yet, much of humanity huddles in the dry, well-lit corners of Sanctuary. This is not for a lack of trying—Sanctuary’s volatile oceans have claimed the bodies and souls of countless foolhardy adventurers who have tread water. Will we truly ever know what riches the ocean guards so fiercely?

Give in to the temptation of the tides and coat yourself in its briny mysteries. The Unspeakable Depths Standard Cosmetic Set is available in the in-game shop for 1,000 Eternal Orbs.

Developer’s Note: Because of player feedback and data collected on play patterns, we decided to change the times that the Shadow Assembly and Wrathborne Invasion take place—this is to give a larger population of players an opportunity to play these activities at a more convenient time. It is our hope that even more players can now enjoy these activities on a regular basis.

Developer’s Note: We have been listening to a deluge of feedback regarding players having a hard time finding specific Set items. It is our belief that adding the ability to craft specific Set items will provide a path for players to reliably complete their sets.

We have received feedback that managing other players in Kion’s Ordeal is quite a challenge. To alleviate organizational duties for the Immortal leader, we have added a few quality-of-life updates to this feature: