Alongside VHS rewinders, slinkies, slap bracelets, and Walkman cassette players, a handful of geeks packed into a tiny room were hard at work on a small racing game for the SNES. Unbeknownst to the group, this high-octane title would go on to not only win awards, but also influence the voice of Blizzard’s epic entertainment experiences for decades to come. Now, as we’re celebrating Blizzard’s 30th anniversary and the re-introduction of iconic retro games, we wanted to shine some polished, chrome, spike-studded headlamps on the racing game that stoked our creative engines from decades in the past. 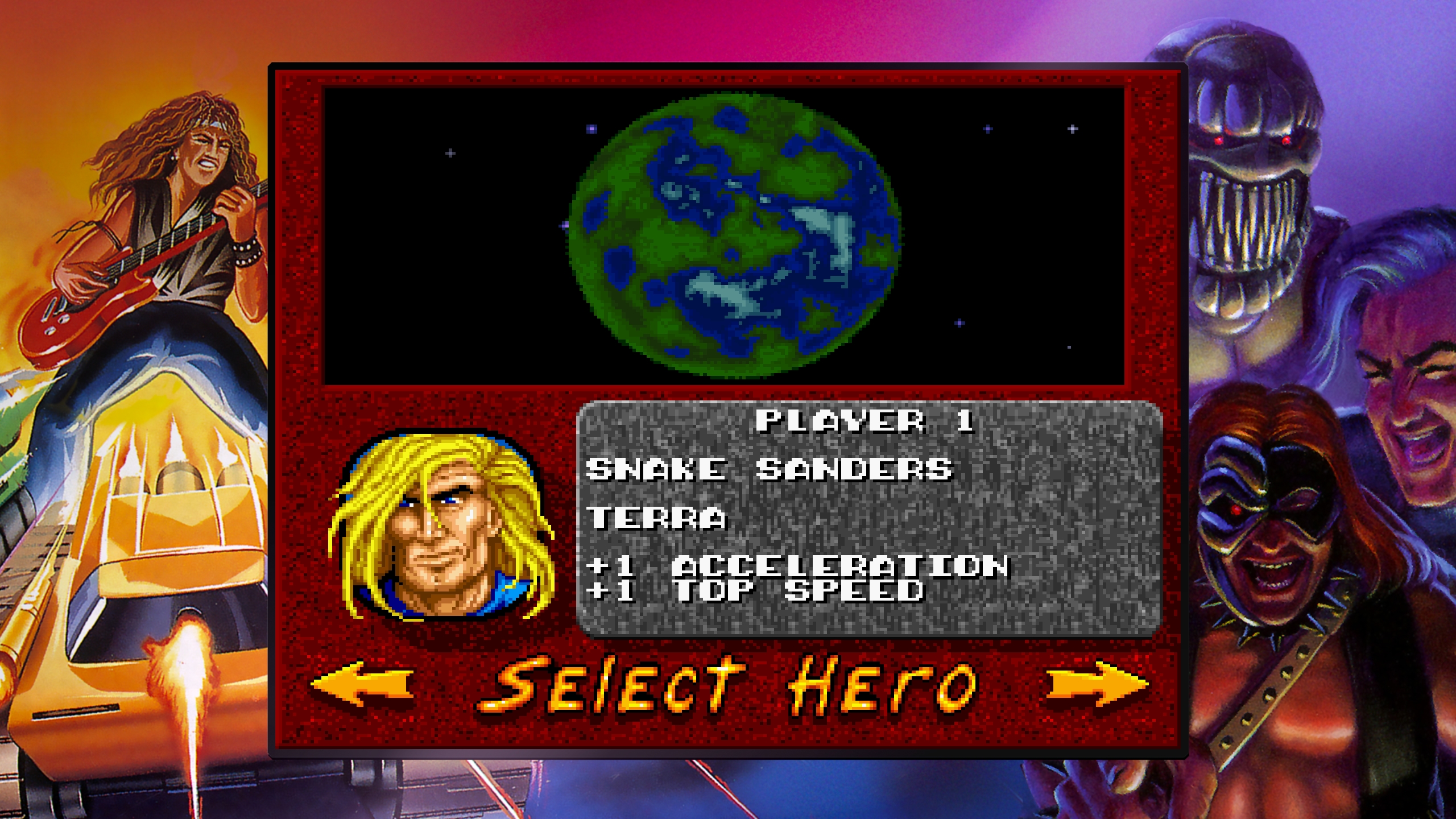 Rolling Back the Speedometer on Rock N Roll Racing

SNES FORCE #6 - REVIEW FROM 1993 - 90% out of 100%: "No matter what music people listen to, put on some rock classics and they'll tap their feet. I'd rather drive a mini than listen to Black Sabbath, but when the 'Paranoid' intro starts you can't help nodding along. The music is only part of the appeal -- the rest of the game is something else. Quite simply, Rock N Roll Racing is the best head-to-head racer to date, transforming pacifist folk musicians into raging engine fiends -- cool!" -Chris

Originally, Rock N Roll Racing was envisioned as something that you could’ve more accurately titled as simply “racing”. Blizzard, then Silicon & Synapse, had released a game titled RPM Racing (Radical Psycho Machine Racing) on the SNES and were developing a sequel. However, after a spark of inspiration from Interplay’s Brian Fargo, and the not-insignificant green light on licensing MIDI versions of iconic heavy metal head-bangers, RPM II took a backseat and Rock N Roll Racing was now set to be the game’s spiritual successor... with a badass new name. The approach to include a variety of popular songs from the genre wasn’t the original plan. According to Allen Adham, Blizzard cofounder, the team initially contacted the world-famous rock and roll band ZZ Top to create what they thought might be called “ZZ Top’s Racing”. Though with the band at the peak of their career, a pivot to a more price-conscious model was ultimately the move for this game.

At the point where production began on Rock N Roll Racing, the company was a group of ~10 people programming, drawing, and writing in a room “about the size of my apartment” according to Bob Fitch, who was hired in 1993 to help program Rock N Roll Racing and has since moved up to becoming a Technical Director at Blizzard. In a BlizzCon 2016 interview, Bob’s description of what it was like to apply for the position is a perfect snapshot of the culture of Blizzard in the early 90’s. He said, “They see [me wearing] this shirt that has a Tasmanian devil eating a peace symbol on the front, which says ‘I love toxic waste’ on the back; and ‘I think this guy’s probably going to fit in’ is how I imagined it went in their heads.”

That culture of like-minded people getting together to make cool games fostered a passionate but relaxed office day-to-day. While no one truly knows who the best behind the wheel was (Bob Fitch claims himself as the king of cruising,) Allen Adham said that he played so much Rock N Roll Racing in the office that “it started to influence the way I drive my real car. I would want to drift through intersections and imagined myself firing missiles at cars in front of me that were going too slow.”

“We pushed it from a normal racing game on boring dirt tracks to racing on inferno planets with aliens blasting away at you. That was just the birth of what we did to all of our games—fantasy, sci-fi, and horror. We were having fun with it. We can do whatever we want, so let’s just do it. That set the tone for future Blizzard games.” - Samwise Didier

Over 20 years span the gap between Rock N Roll Racing and modern Blizzard titles, but the ripples created by this short n’ sweet racer’s launch can still be seen in modern releases.

Take, for example, Hearthstone, the silly but surprisingly complex card-battler. Hearthstone is occasionally considered Blizzard’s first attempt at a departure from the “epic” tone, in favor of something a little more playful. However, with the obviously tongue-in-cheek character introductions, the questionable car physics, and some grade-A cheese delivered by the incomparable announcer Larry Huffman, Rock N Roll Racing along with The Lost Vikings were the games that cracked the door on ridiculousness, which future developers would blow off the hinges. Allen Adham described the early days of Blizzard and the environment fostered by such a small team as something less like a company, and occasionally “more like a fraternity house.” he said. “People were having a great time. Laughs left and right. So that naturally worked its way into our games.”

For fans familiar with some of Blizzard’s internal workings, a history of heavy metal inspired work should come as little surprise. Some of the company's founders and oldest contributors share a love for guitar-driven musical mayhem. So much so that they started their own metal band. The artist formerly known as Level 80 Elite Tauren Chieftain (which has appended its name with a content-appropriate level signifier throughout the years) debuted in the credit sequence for the 2003 Warcraft III: Frozen Throne release with their single “Power of the Horde”, seen below. Since then, the band has branched out into StarCraft and Diablo themed pieces and has performed in front of massive crowds of fans on stages around the world... and they even opened for Metallica.

For some modern Blizzard employees, like Game Master Angelo Cani, the lasting impression of Rock N Roll Racer was one of a kid first discovering the language-spanning power of rock music. That, and sleuthing out the songs that wormed their way out of the TV speakers and into his brain, by any means necessary. In Angelo’s words, "We liked the songs, and knew they were famous, but had no idea what they were called. I was born in Brazil, so had no knowledge of English at all at the time. Since we couldn't identify them but still wanted to play them at home, we went to a music store and we sang our 16-bit remembered version of Born to be Wild from the depths of our lungs. Despite our effort, they couldn't distinguish it... maybe because we were about 10 years old and were singing wildly incorrect versions (even though in my mind it was faithful to the original.) A few years later an English teacher put on one of the songs during the first few days of class. I recognized it and said 'Hey! I know this song from a game' and he replied with 'So, you played Rock N Roll Racing?', to my delight he was a metal head who gave me list of every track from the game and few others from the same bands as a bonus."

Rock N Roll Racing’s sci-fi aesthetic has been sprinkled liberally across future Blizzard Entertainment games. It’s not hard to spot the influence that Rock N Roll Racer had on StarCraft’s terrain and planet aesthetics when it hit the shelves 5 years after RNRR’s release. Take a look:

The brushed metal, lasers and turrets found surrounding the first track where your digital tire meets tread, Chem VI, could be a snapshot of a recreational area in the heart of the Terran Confederacy. 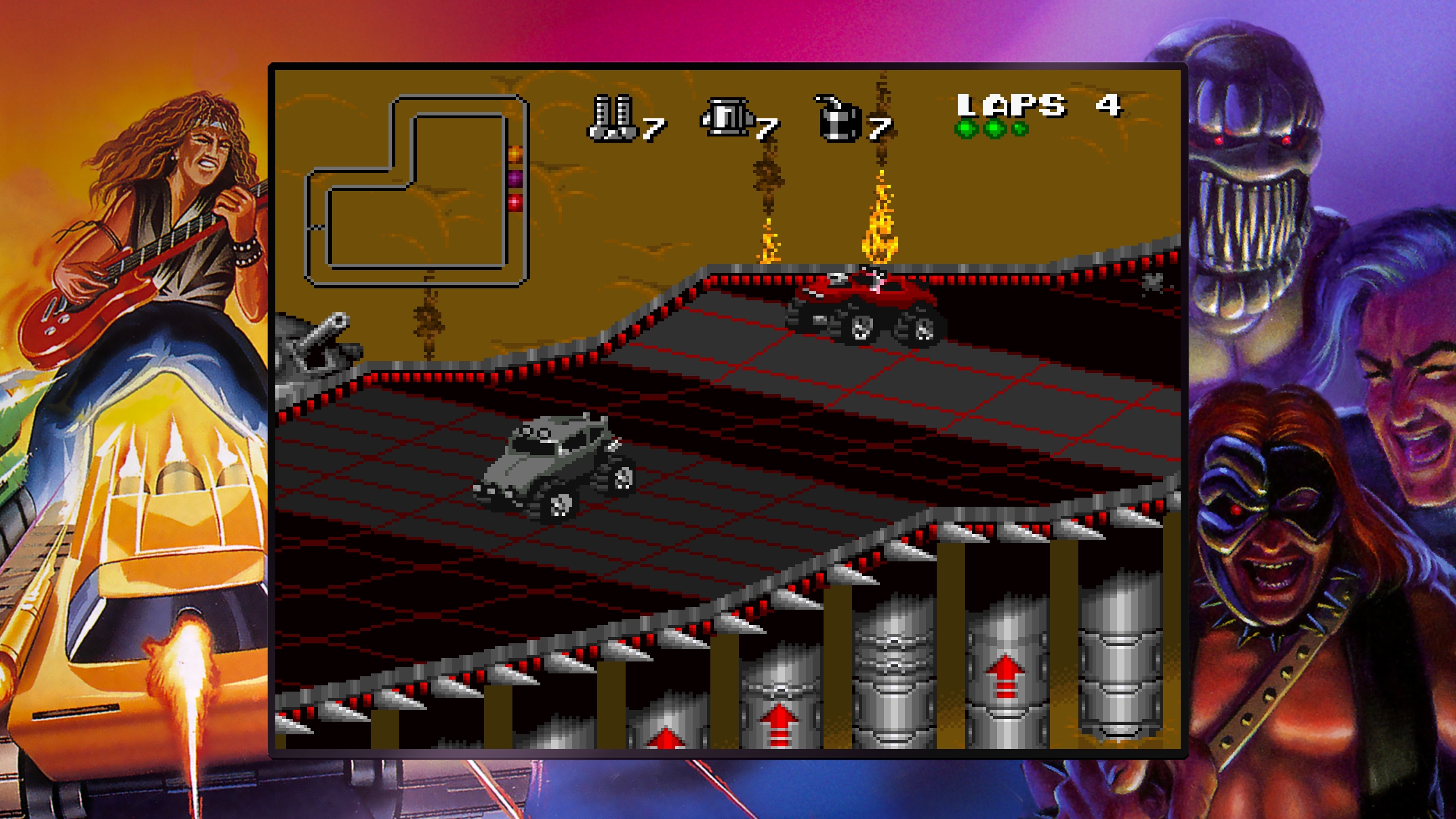 The slime-covered, claw-festooned, and completely alien landscape of Drakonis is so Zerg-like that it’s a surprise when a Baneling doesn’t end up smeared across your windshield at the end of a race. 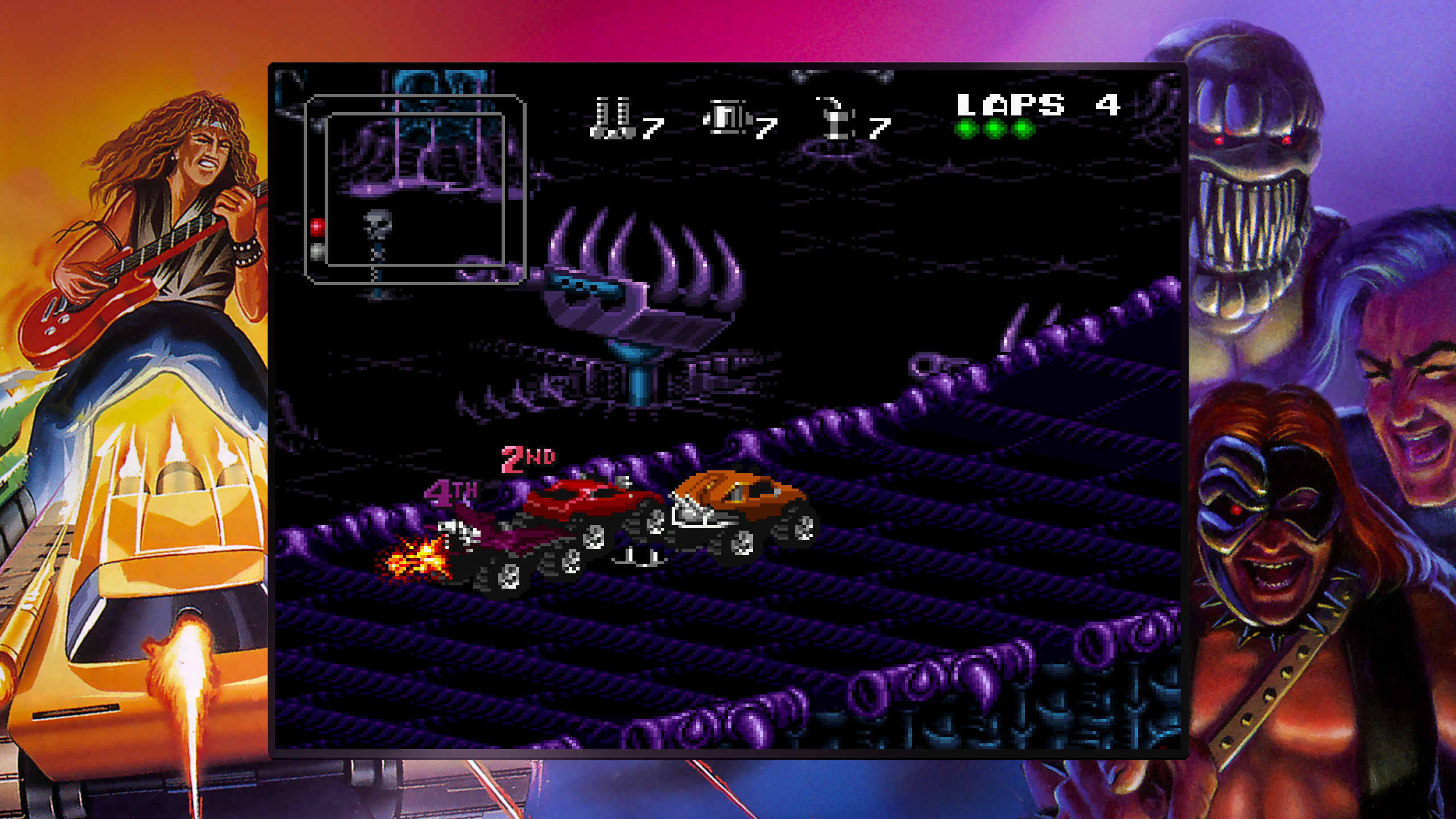 On and off the track, Rock N Roll Racer is a game of deliciously satisfying moments that fans of modern Blizzard titles likely find all-too familiar. Skidding past the finish line after waving to your opponent bogged up in your perfectly placed puddle of BF’s Slipsauce is reminiscent of landing that point-winning Graviton Surge in the final seconds of overtime. Touching down on Bogmire where you switch out your beat-up wheels for a shiny new Battle Trak and a set of KO Scatterpacks is the same sensation of watching the final gem clink into its socket on your new build-defining best-in-slot Legendary weapon. The high highs and nerd-chill inducing moments shared between Blizzard titles has been a deliberate design choice that echoes back decades. If it doesn’t feel awesome to play, then there’s room for more of that Blizzard Polish (TM). 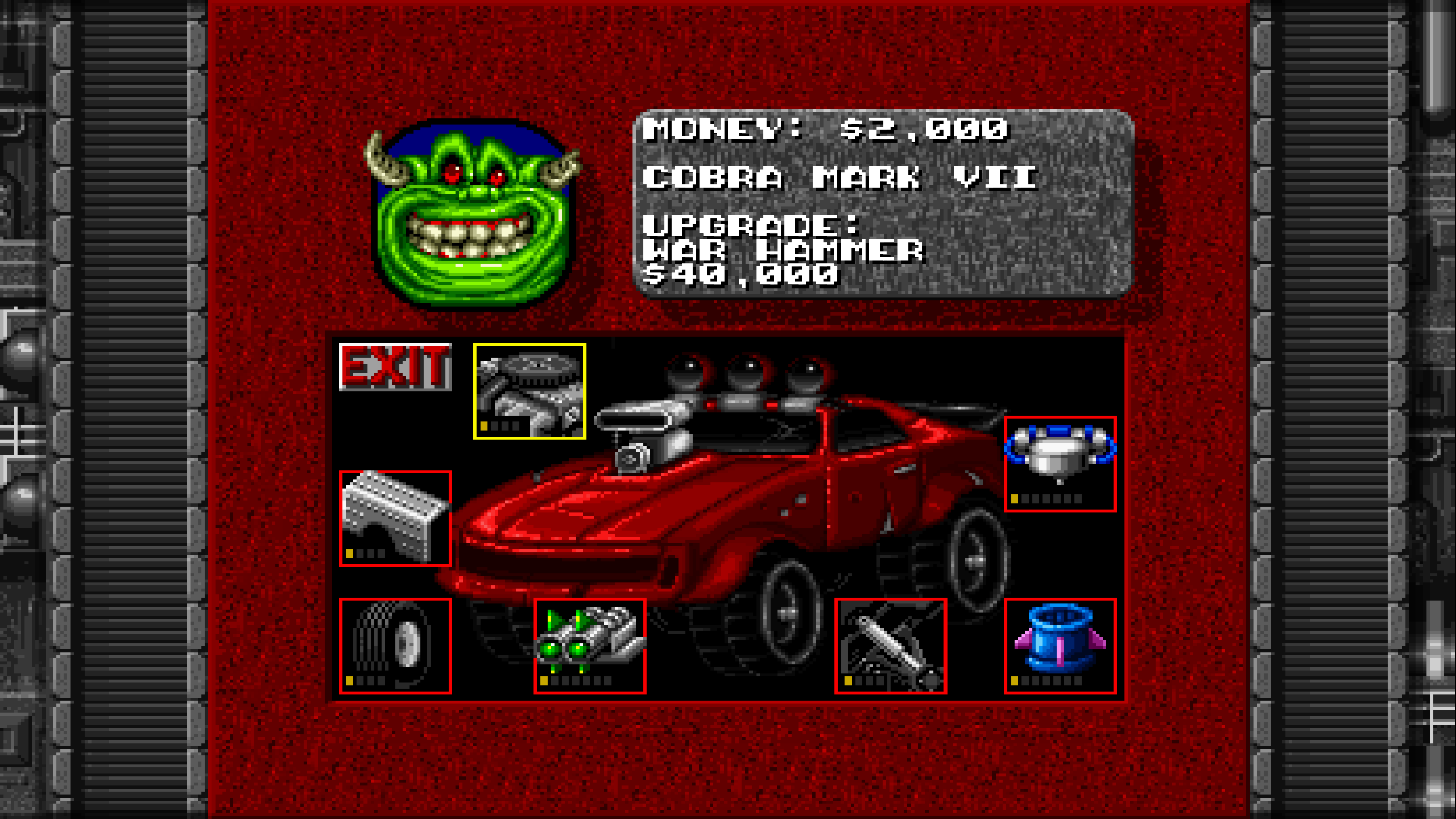 While we aren’t likely to hear players chanting the iconic lines of Larry Huffman or hoisting “BRING BACK CYBERHAWK” signs from the crowds at future BlizzCon celebrations, the Rock N Roll fanbase is far from finished with this classic. You can still find the die-hard Snake Sanders fans pushing for their inclusion in the Heroes of the Storm roster or looking to get Larry Huffman’s vocal stylings as an announcer pack.

Looking back across decades in the games and entertainment industries, it’s impossible to say how Blizzard would be different today without the look, sound, and tone established and celebrated in Rock N Roll Racer over 20 years ago. One thing is certain, though—it wouldn’t kick quite so much ass.