Into the Shadowlands: Catching up at 60 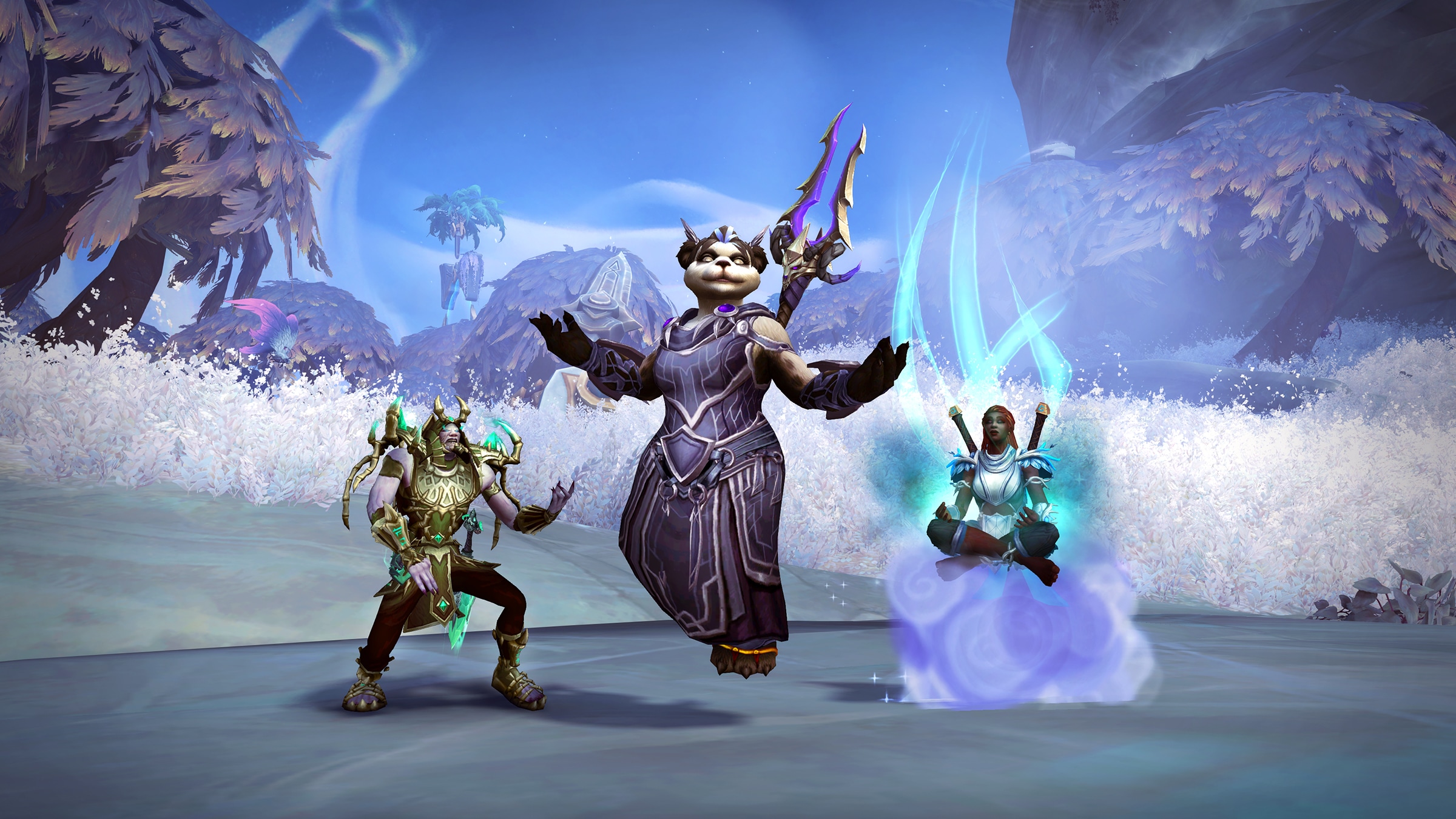 The fight for the Shadowlands is at its zenith and needs heroes like you to prevent the Jailer’s malevolent vision for the future from coming to fruition. Whether you’re returning to your character after a hiatus—or are new to World of Warcraft—then this catch-up guide is for you.

For players who have yet to set foot into the Shadowlands, are still on their quest to maximum level, or took a break before choosing your Covenant, your guide begins here.

For heroes who are level 60 and have already chosen their Covenant, start here to learn more about the newest systems and adventures that await in the current content update.

Once your character reaches level 48, you’ll receive a summon to meet with Highlord Bolvar Fordragon in Icecrown. There, you’ll kick off the events that take you into the Shadowlands. As you level within the Shadowlands’ five new zones, you’ll progress through the main story campaign, in which you’ll aid the four ruling Covenants of the Shadowlands. Turning in quests, killing enemies, and completing instanced activities such as dungeons and Battlegrounds will reward you with the experience points needed to reach the expansion’s max level of 60.

After you reach level 60 and have completed the storyline “The Master of Revendreth” along with the quests “The End of the Beginning” and “The Looming Dark,” you’ll receive the quest “Choosing Your Purpose” summoning you to Oribos. Here, you’ll be able to pledge yourself to one of the four Covenants: Kyrian, Necrolord, Night Fae, and Venthyr. Each Covenant offers its champions two unique abilities, along with other powers and cosmetic rewards that can be unlocked through their Covenant Campaign—an epic storyline unique to the faction—and other activities over time. This alliance also gives the player access to a Covenant Sanctum, a base of operations only open to players who have forged a pact with its leaders.

Tip: Struggling with which Covenant to pick? Untangle your analysis paralysis by learning more about each (and what they reward) with these robust overviews.

As you progress through your Covenant’s story you’ll build Renown, increasing the trust your character has earned within the Covenant. Renown allows you to unlock access to special features that increase your character’s combat prowess such as Soulbinds, ability to explore the Shadowlands with flying as well as cosmetic rewards unique to your chosen Covenant. After you finish your first Covenant Campaign chapter, doing a variety of activities will allow you to earn Renown.

Completing the following activities are a straight-forward way to earn Renown:

During your travels in the realms of Death, you’ll meet key members from each Covenant—Kyrian, Necrolord, Night Fae, and Venthyr—and, if you choose to walk in their path, you’ll be able to Soulbind with them. Soulbinding allows you to gain access to traits that provide bonuses or enhance your skills so you can effectively combat all who stand in your way. [LEARN MORE]

In the Shadowlands, you’ll need every advantage afforded to restore balance to the afterlives. Locked within Torghast, Tower of the Damned, you’ll discover the Runecarver—a powerful entity chained within its unhallowed halls. Together, you’ll forge legendary items infused with otherworldly powers that will give you a fighting chance against the Jailer and his minions. [LEARN MORE]

Backed by the renewed might of the four Covenants, the champions of the Horde and the Alliance will take the fight for the Shadowlands to the seat of the Jailer’s power in the current content update, Chains of Domination.

Soon after reaching level 60, you can join forces with Covenants’ armies and venture into the two new areas, Korthia and Desmotraeon, and play through the new Chains of Domination campaign storyline. Level 60 players ready to embark on this journey will receive the quest “The First Move,” urging them to meet with Polemarch Adrestes in Oribos. To receive this quest, you must complete the second chapter of your Covenant Campaign.

Tip: If you wish to experience the storyline and activities released prior to Chains of Domination, including the Castle Nathria raid, you can still do so in parallel with the newest content. Progress in one does not preclude you from accessing the other.

Enter the City of Secrets

As part of his ongoing schemes, the Jailer has located a long-lost domain of the Shadowlands—Korthia, the City of Secrets. Unlock this new area by completing the “Maw Walkers” chapter of the Chains of Domination campaign. There, you’ll team up with two new factions—Death’s Advance and The Archivist’s Codex—to fight against the endless forces of the Jailer and work to uncover what obscurities he seeks in this forgotten realm. Gain the favor of these factions by completing daily quests and in turn they will sell you equipment upgrades and a variety of cosmetic items. [LEARN MORE]

Soar above the four Covenant-aligned Shadowlands zones after you earn the ability to fly. To do so, you’ll need to reach Renown Level 44 and complete the quest “The Primus Returns” within the Chains of Domination Campaign “The Last Sigil” (Chapter 4). For your efforts, you’ll unlock flying for all characters on your account and upon reaching Renown Level 45, you’ll also unlock a special mount unique to your character’s chosen Covenant. [LEARN MORE]

Breach the Sanctum of Domination and slay the formidable servants of Sylvanas and the Banished One in the epic new raid available in four difficulties: Raid Finder, Normal, Heroic, and Mythic. You can queue up for the Raid Finder version (default hotkey: i) if your character has an item level of 195 or greater. If you’re ready to tackle Normal, Heroic, or Mythic difficulties, you can use the Group Finder tool (default hotkey: i) to search for like-minded groups, or you can create your own! [LEARN MORE]

Harness the Power of the Dark Side

Empower your gear with Shards of Domination, a new type of powerful gem looted from the bosses lurking within the Sanctum of Domination. These remnants of the Runecarver’s work have long augmented the Jailer’s armaments, but now you can seize them for yourself and turn the tables on the Banished One.

Shards exude three different types of runic magic: Blood, Frost, and Unholy. These ghastly gems can be socketed into gear with Domination sockets, enhancing your characters’ damage, mitigation, or healing abilities. While each individual Shard’s power works anywhere, inserting three of the same type into your gear creates a Rune Word, granting you a powerful boon that increases your combat potency even further within the Maw, Torghast, and the Sanctum of Domination. Each class has five different armor pieces that can don a Domination socket, which can be looted from the raid. Defeating raid bosses can also reward you with Stygian Embers, which are used to upgrade your Shards and further enhance their potent bonuses.

To rank up your Shards, visit Bonesmith Heirmir in Korthia after completing Chapter 3: Focusing the Eye in the Chains of Domination campaign.

Now is a great time to explore the otherworldly realms of the Shadowlands and meet other players in the fight for the future of the afterlives. World of Warcraft is everchanging and expansions evolve over time, so you can look forward to discovering new content with periodic content updates, patches, and hotfixes.

Discover some of the new features coming to World of Warcraft with our 9.1.5 content update preview. You can also keep tabs on what changes transpire throughout the week (or since you last played!) with our hotfix articles.

Thanks for playing; we look forward to seeing you in Shadowlands and beyond!