It’s time for another Developer Insights in which we explore a hero’s design and mechanics. This week, we’ll be focusing on a hero that’s been around since the beginning of the Technical Alpha. Join us for a chat with Game Designer Kent-Erik Hagman about the Queen of Blades, Kerrigan. 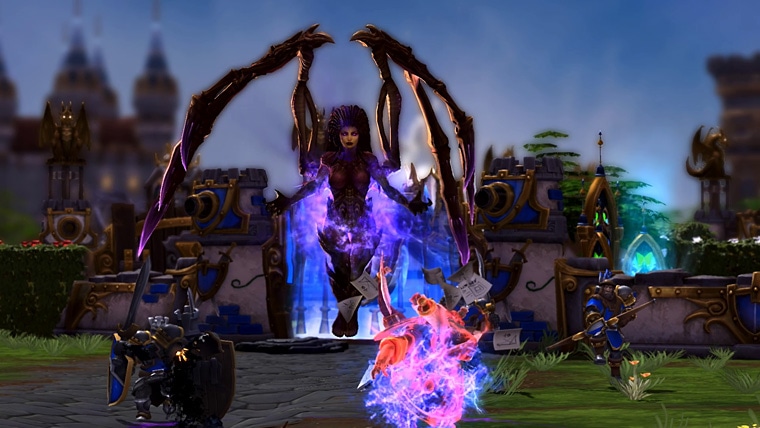 Trikslyr: Kerrigan is a very powerful force in the StarCraft universe. She's a strong leader, possesses destructive psychic powers, and has shown incredible resolve in many situations. What aspects of Kerrigan’s character were most important to bring to life in her kit?

Kent: With Kerrigan, we really wanted to capture the powerful force she projects. She's a character who isn't afraid to do her own dirty work. That’s something we felt Heart of the Swarm portrayed quite well. We wanted to capture that "in your face" mentality. So you see abilities like Ravage, which can really get her in the middle of a teamfight, and Sweeping Grasp, which pulls her enemies in close.  The art team also really wanted to stress her wings and spiky nature, so Crushing Grip from Heart of the Swarm became Impaling Blades in Heroes to really play up her spikes. Finally, her whole kit is topped off with Maelstrom, which really synergizes with her entire playstyle.

Trikslyr: In the current state of the game, Kerrigan has become a solid initiator for a lot of teams due to abilities mentioned above. Has the design team been happy with the role she has landed in?

Kent: We think so! It wasn't necessarily a goal from the get go. Instead, we were hoping to strike a fluid playstyle that originated from the tools we provided her. Her abilities lead to a natural combo that simply facilitates the type of play mentioned above.

In retrospect, her current playstyle does match the personality we've seen her portray in previous games.

Trikslyr: Let's take a second to chat about Kerrigan's heroic abilities. Maelstrom works nicely with the playstyle mentioned above, but her second heroic, Summon Ultralisk, seems to be harder to incorporate into her play. Are there any plans to change the heroic or is the design team happy with its current iteration?

Kent: Making two heroics available to a hero allows us to offer various playstyle differences for that hero based on what we hope is a fun decision about halfway through a game. That said, we definitely agree there's more we can do with Ultralisk. Unfortunately, you'll have to stay tuned for that, as we're still working out what exactly that will be.

Trikslyr: Kerrigan has been a playable hero since Heroes of the Storm’s infancy. Have there been any fun design moments with her that you would like to share?

Kent: Kerrigan has come a long, long way since her initial design. There was a time in the distant past, where she was a ranged caster. She used heavy-hitting abilities like Chain Lightning and Psi Shift, but no matter what form she's taken, she's always been one of the scariest heroes to see in battle. During our playtests in the days of yore, there were a fair number of games in which Assimilation was overtuned, making her pretty much invincible. This naturally led to 1v5 situations that were punctuated by loud groans. GG, Kerrigan. GG.

A huge thank you to Kent-Erik Hagman and the design team for taking time to chat with us about Kerrigan. Check out the list below if you missed any of our previous Developer Insights blogs, and keep an eye on HeroesoftheStorm.com for more news from the Nexus.