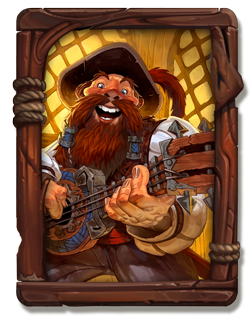 The Bard’s voice cut through the din of the tavern as he spoke. Players laid down their cards, diners set down their forks, and Harth Stonebrew leaned against the bar, grinning. All eyes were drawn to the man standing before the hearth. The usual raucous laughter and friendly banter came to a halt as a hush fell over the tavern. Soon, all that could be heard was the crackling of the fire, and the subtle, mesmerizing melody that emerged from the Bard’s instrument as he played.

“A group of seasoned adventurers once delved into catacombs deep, in search of the fabled axe, Woecleaver! These heroes trekked through miles of mineshafts and tunnels chipped into the rock by busy kobold hands. They endured hardship, overcame dozens of deadly traps, and laid low scores of vicious monsters . . .  but in the end? They failed, and hired someone else to get it!” 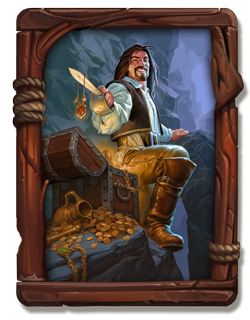 There were some wry chuckles from the audience, but the Bard was quick to speak over them, “This is the story of the man they hired. An adventurer’s adventurer, slicker than a greased murloc, and twice as slippery. A rogue, a thief, a treasure-hunting vagabond—and a hero! Of a sort. You may know him as Marin the Fox! And if you don’t? Well, by the end of my tale, you will!”

At the mention of Marin’s name, a chorus of cheers went up. A tale about Marin was always worth the listening.

Marin stepped into a large, stalactite-studded chamber and found that the path ahead was slashed in half by a deep chasm. The roar of an underground river could be heard far below, and mist rose from the depths to add a ghostly cast to the clusters of glowing blue crystals that sprouted from the walls. Lava oozed from a boarded-up hole in the wall of the cavern, lending the cavern a ruddy glow and mingling a sulfurous stink with the sweeter scent of water. Marin idly wondered how the planks blocking the molten rock avoided burning to cinders, and considered his options. 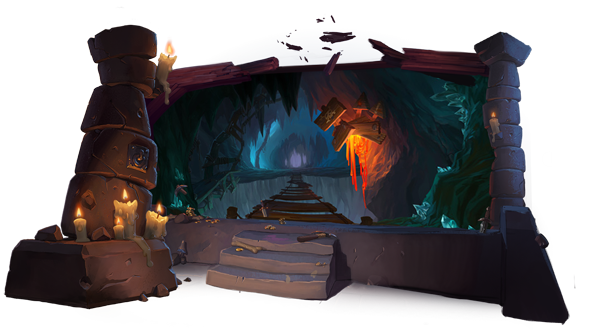 Fortunately, a bridge forded the river-carved rift ahead. Unfortunately, it was a knotted assemblage of fraying rope and weathered wooden boards hanging precariously over a dizzying drop. And there were no hand rails. Of course.

It didn’t look promising, but poison gas had flooded the only other route Marin was aware of, and backtracking would take hours. From the looks of the hastily-blocked lava tube, this path might not last much longer, either. The catacombs were like that—a little different every time you returned. And Marin returned often. 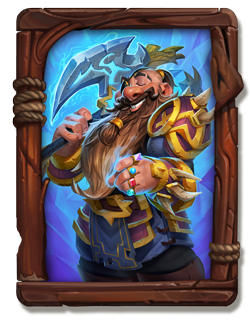 While the lure of riches was always enough to provoke a dungeon run on its own, this one had a special purpose. An old friend had asked Marin for help retrieving the legendary axe, Woecleaver. He recalled Oakheart’s words from a few days ago. . . .

“The Guild needs that axe, and we just can’t find the blasted thing. Aye, we spent weeks searching the catacombs and turned up nothing but kobolds and more kobolds. Everyone knows you’re the best, Marin, and I need your help. So, what does ‘the’ Fox say?”

Turns out it didn’t pay anything, but Oakheart had heard a rumor that Woecleaver was stashed with 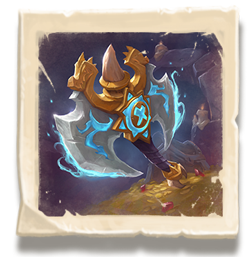 another treasure, one Marin had been after for some time—a large chest said to contain items of particular interest. Marin had agreed, and now here he was, faced with a marvel of kobold “engineering.”

The ropes groaned and the “bridge” danced drunkenly underfoot as Marin gingerly committed his weight to the splintering wood. The chasm yawned below, distressingly visible between the wide gaps in the planks, and a breeze whistled upward from the depths to tug him this way and that. With every nerve-wracking step, he tried his best to not imagine the bridge abruptly dropping out from beneath him.

As he neared the middle, a group of kobolds sprang from the tunnel entrance Marin was creeping toward. An ambush! Though, thankfully, not a very effective one—the kobolds revealed themselves too early and just stood around in plain sight. Still, there were several of them, and only one Marin, halfway across a decaying bridge that could give out at any moment. Not an ideal situation!

One of the kobolds was larger than the rest (which isn’t saying much), and this one sported a crown with an actual lantern in place of the typical kobold candle. The miniature monarch was rather more rotund than his fellows too—no doubt there were culinary benefits to being king.

The crowned kobold said something to one of his followers, then prodded it forward onto the swaying bridge. The additional weight was enough to make the fraying ropes groan in a most alarming way. Marin gritted his teeth.

The small kobold wrung its paws, puffed up its chest, and spoke, “Y-you. You Adventurer. . . .”

Confronted by a fully-armed hero who was much larger up close, the kobold forgot its lines. At a loss, it fell back on the classics. “You no take candle!”, it squeaked, then scampered back to the safety of its fellows.

The crowned kobold rubbed a paw across his face in exasperation. “I be King Togwaggle!” he shouted, his voice echoing oddly in the cavernous space. “These is being MY tunnels! YOU be dropping treasures now!”

Marin arched an eyebrow. “There’s a snag in your plan, your Highness. You see, I don’t have any treasure yet. How about you let me by, and I’ll go get some. Then we can have a do-over on my way out?”

Several of the kobolds saw the wisdom in this suggestion and nodded happily, candle flames bobbing. Their king, however, was not so easily convinced. Togwaggle’s eyes glittered malevolently. “If you not be dropping, kobolds be taking!” he shrieked, fist raised, “BE SUMMONING THE GOLEM!”

The audience gasped. Tavern chairs squeaked as patrons leaned forward, hanging onto the Bard’s every word. There was a long pause as the spell broke, and then someone asked, “Well?! What happened next?”

“Telling stories is thirsty work, friend. Think I’ll be taking a short break,” the Bard winked in reply. He dragged a large cauldron across the tavern floor. Scrawled across the black iron in white paint were four words: ‘HUZZAH FOR THE TIPPER’.