Snow Much Fun: Behind Penguin Mei and Toybot Zenyatta 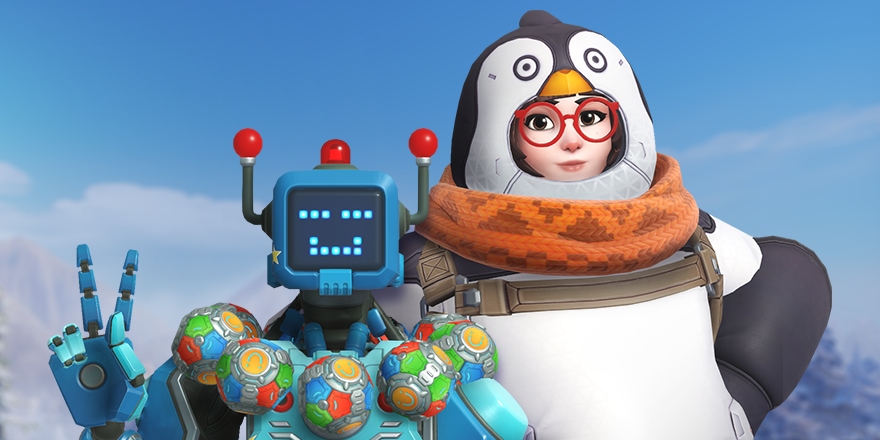 The holidays are back, and with them come festive new outfits for Overwatch players to don while they sleigh the competition. Among the skins to unwrap this year are Toybot Zenyatta, a chrome-plated present straight from Santa’s sack, and Penguin Mei, who sports the latest in vogue cuddly climatology gear.

One of the most unique skins in the sleigh-load of Winter Wonderland cosmetics, Toybot Zenyatta employs visual effects that allow him to swap between faces in the midst of battle. The dichotomy between smiley and frowny face echoes his mantra of balance in both harmony and discord and gives him a bit of fun flair as he helps allies and hurts enemies. David Kang, the art director for the skin, guided the concept from its inception to its implementation in the game.

“We started out by doing in-house sketches,” says Kang. “Then, we took what worked, and sent that to our concept artists to finish. We loved ideation for this skin, so we sent the sketches to one of our outsource concept artists, Yiming, who really pushed it and made the concept game-ready and Blizzard-quality. As the art director, I looked over the entire process.”

The finished product is a charming, retro-ified Zenyatta, the vintage sheen of his body accented by bright red antennae and a battery pack powering his movements. He’s the sort of robot you might’ve gleefully unwrapped on a chilly 70s Christmas morning, its charming, box-y smile beaming up at you as you held it in your hands–except this robot has a digitized grimace on his face as he floats menacingly in your direction and slings orbs at your head. 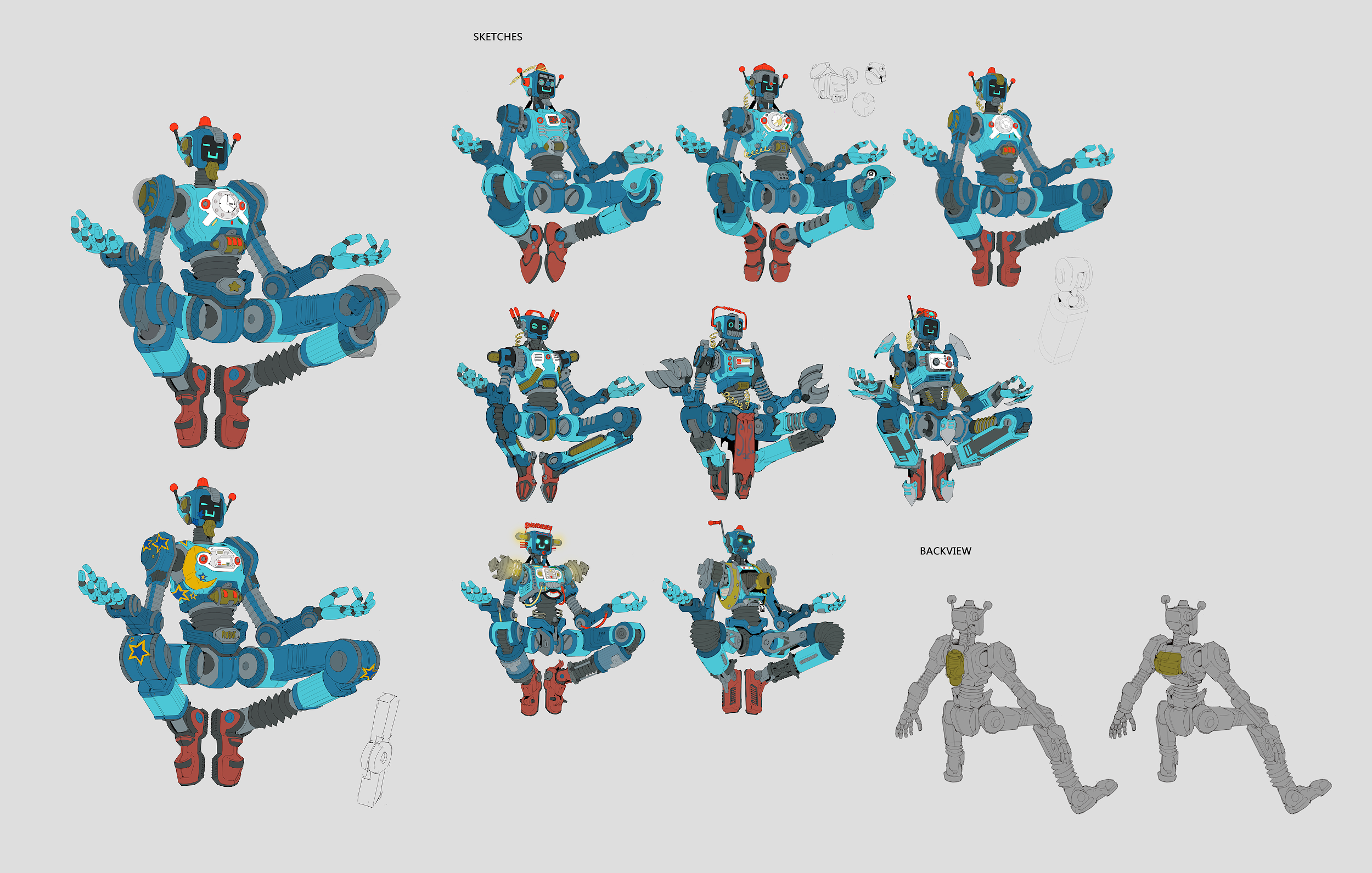 The tin robot theme was a perfect fit for a character who’s already robotic, making the process a fairly smooth one for the concept art team and allowing them to take a number of creative liberties with the skin’s little details. “Zenyatta is one of our simpler characters to make skins for,” says Kang. “Unlike most of our other heroes, he doesn’t have a weapon-weapon—he has orbs, which are easier for us to concept when we’re designing new looks for him.”

Kang’s favorite thing about the skin? Zenyatta’s changing facial expressions, a creative feat accomplished through the combined efforts of the team’s animators and artists, including Ben Gerowe, a technical artist.

“The faces change when Zenyatta is attacking, getting hit, using his ultimate and when he dies. There are also a couple fun ones in some emotes and Play of The Games,” says Gerowe. “The concept artists came up with a bunch of options that were extremely helpful for getting some ideas rolling for what he would look like during certain moments. Once we had most of them working in-game and animation had some time to play around with the rig, they were able to do some extra ones as well.”

To accomplish Zenyatta’s swift face-swapping, Gerowe and the animators overrode his default face pose with custom digitized expressions. “We had to make sure we had enough resolution in the rig to let the animator make some expressive faces without making it too animation-heavy. Going over concepts with the modeling and animation teams was extremely helpful in coming up with a setup that worked with the poses we wanted.”

Aligning the more futuristic look of Zenyatta’s face with his throwback aesthetic took several rounds of design iteration. “We spent some time trying to get the sizing correct for the meshes we used to assemble the face in combination with how we were going to do the texture,” says Gerowe. “We originally started with a rough setup that was similar to how Mei’s robot, Snowball, had their eyes set up to work. From there, we evolved the look into a tighter design that worked better for the retro look of the skin, and eventually arrived at the look you see today in the game.”

Another detail the team counts among their favorites on the skin is the tag stuck to Zenyatta.

“He’s supposed to be a gift from the North Pole, so instead of a price tag, he has a little letter from Santa attached to his back,” says Kang. It’s in a punch card language that utilizes holes to represent computer data; when delicately taken off Zenyatta and fed into a card reader connected to a computer, the sequence, converted to human language, reads: From Santa.

With Zenyatta all wrapped up in a big red bow, players might just find a Toybot inside one of their presents from Santa this year.

March of a Penguin

The winter season evokes certain sets of imagery—flurries of snow, mugs of warm cocoa, fuzzy little animals bundled up in cable-knit sweaters and tufted hats, and everything to do with the cuddly mascot of the Antarctic tundra: penguins. One of the event’s jolliest skins, Penguin Mei hatched from the mind of concept artist Kejun Wang.

Tasked with designing a merry new look for everyone’s favorite climatologist, Wang got to work jamming with his fellow artists on the Overwatch team. “We usually do sketches first based on the characters and events,” says Wang. “Sometimes the whole concept team will spend a week or two just dedicating ourselves to drawing out ideas.”

With the ideation sessions in full swing, Wang found himself wondering how to create a new skin that would embody the charm of the holiday theme while also being unique from her base model and her existing skins. 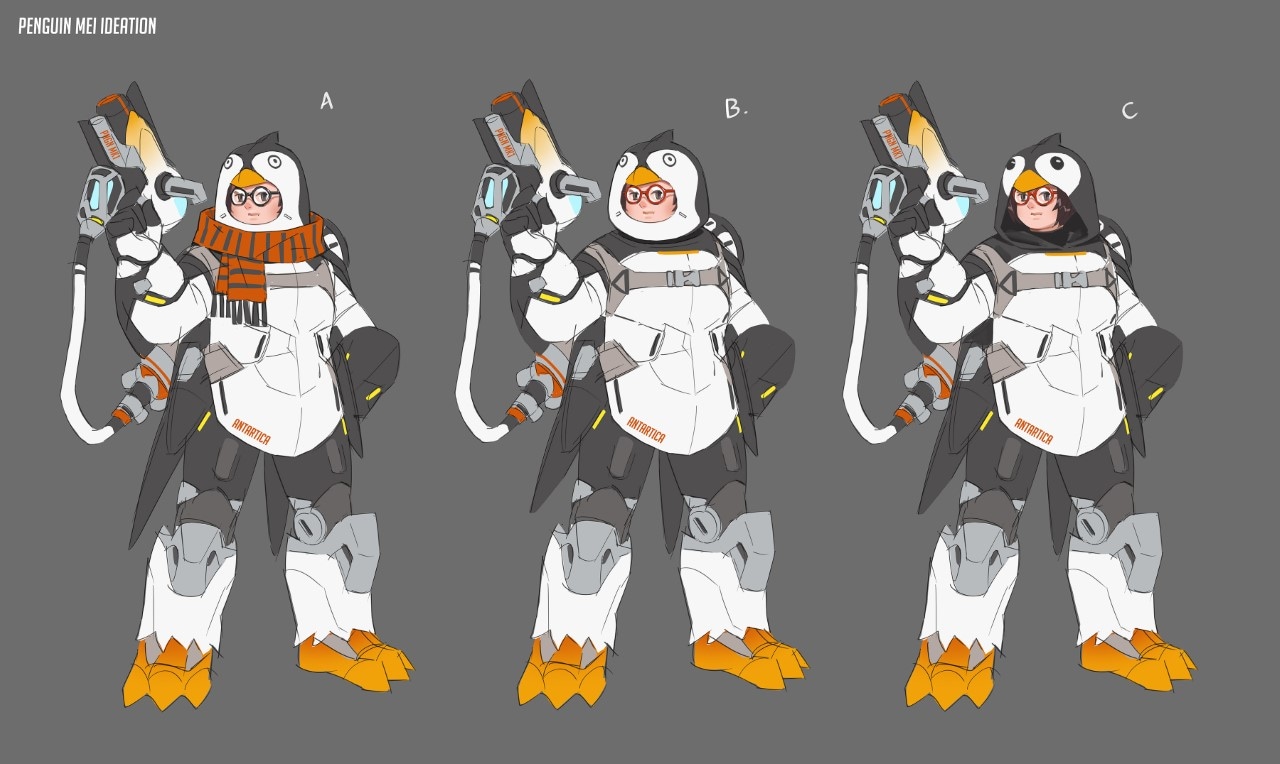 “One of my teammates actually came up with the original idea,” says Wang. “I talked to him while I was thinking about winter skin ideas, and he suggested a penguin theme. The idea seemed a bit crazy in the beginning, but I really like skins that are cute and fun, so I decided to sketch it out. I remember watching some Antarctica documentaries where penguin robots were used to shoot close-up footage of real penguins, which ended up inspiring me. I think that Mei could wear a suit as camouflage to help her research Antarctic wildlife.”

Some of Wang’s earliest ideation sketches didn’t quite capture his desired aesthetic, leaving Mei looking more like a theme park worker shuffling around in an oversized, sweaty mascot suit than the plucky penguin protector he intended her to be. “I think the initial sketches were too goofy,” he says. “Some of my coworkers suggested adding more tech-looking parts, which makes sense, considering she’s a scientist. The functional details make the design look more believable.”

The product: a skin that captures a feeling of winter whimsy with her “adorable baby Snowball,” a kigurumi-reminiscent hood, and adorably-oversized orange feet while retaining the scientist flair innate to her character. It’s a perfect fit for Mei, who’s always been one of the candidates for the game’s more lighthearted skins, like Beekeeper, Pajamei, and Honeydew. “Mei is known for her optimistic personality, and she’s one of the cuter heroes,” says Wang. “It’s hard for me to imagine a character like Widowmaker putting on an adorable penguin suit like this.”

After tidying up the concept, the team waddled its way into some technical difficulties. “Before we took the idea further, I was fortunate enough to have both character artist Donald Phan and tech artist Albert Vital help me block out the model and test it in-game to see if there was a way to avoid clipping (when the model’s geometry intersects in a way it isn’t supposed to) in the neck area of her model,” says Wang.

To circumvent these clipping issues, Wang ended up designing a cozy knit scarf to wrap around Mei’s neck so her animations could look more natural. After seeing how the block-out model looked, he began working on the final design while maintaining constant contact with Phan and Vital to adjust small details. “We put a lot of time and effort into making the idea come to life.” 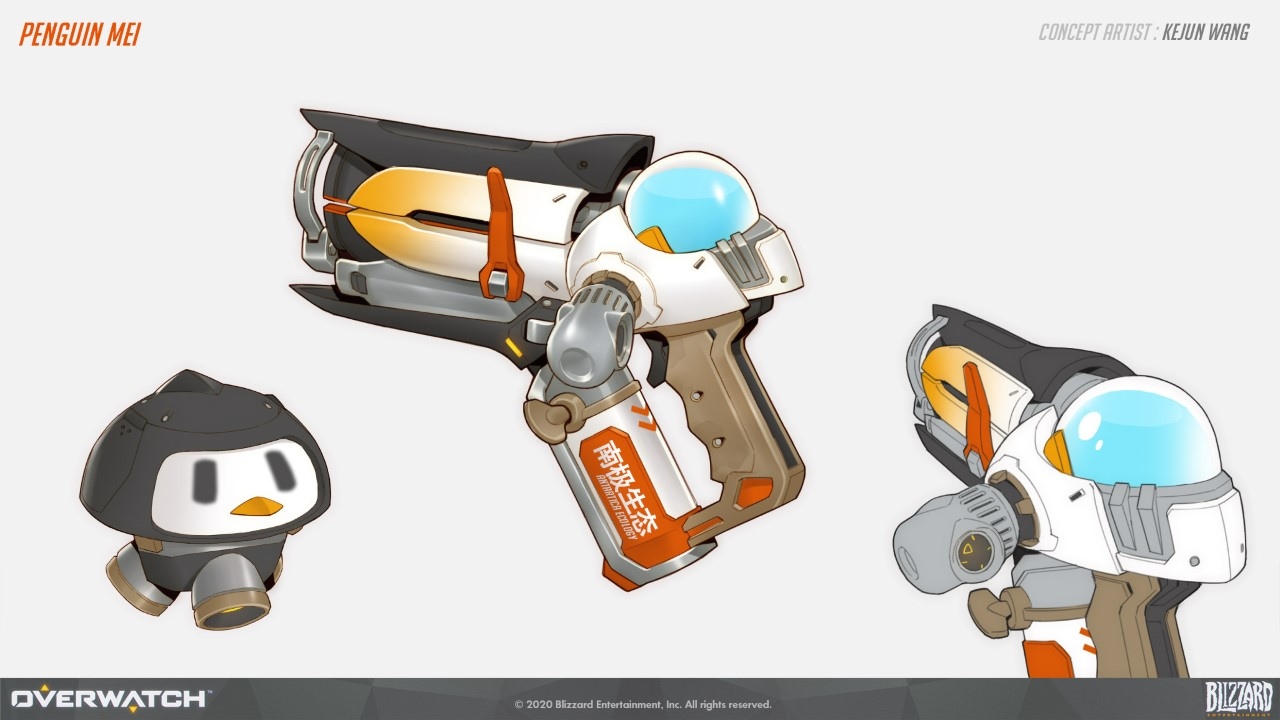 Penguin Mei is the first Mei skin Wang has designed, and he’s already thinking about ideas for his next one. “I’d love to design a Mei skin where she’s made of huge, three-dimensional pixels (reminiscent of her pixel achievement spray), but that would probably end up being very technically challenging,” he says. “Another idea I had for this event was Dragon Kid Mei, inspired by an old Chinese television show I used to watch when I was a kid.”

Wang is happy with Mei’s cheerful new holiday ensemble, and hopes he can return to some of his ideas for the character in the future.

As for what Mei will be doing with that egg in her blaster backpack once it finally hatches?

“I think she’ll bring it on a journey to find its mom,” says a smiling Wang.

Overwatch Winter Wonderland is back! Unwrap a sleigh-load of cosmetics, including Toybot Zenyatta and Penguin Mei, and win weekly rewards now through January 5. Plus, celebrate the most wonderful time of year by teaming up with your friends to play the new holiday brawl: Freezethaw Elimination!