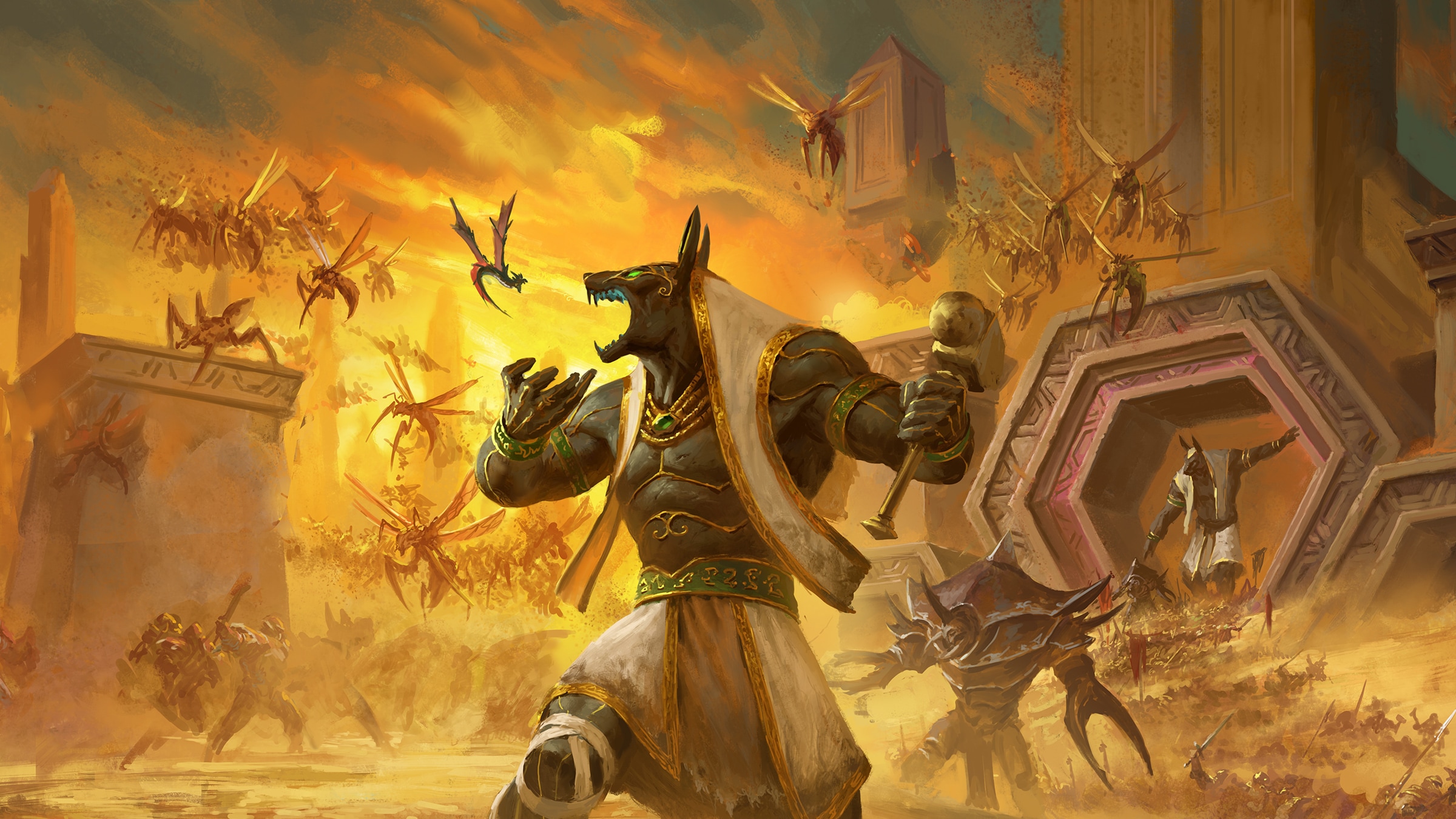 The Alliance and the Horde continue to heed the call to arms and soon the Scarab Lords will rise at the ringing of the gong on realms who have completed the war effort and hearken the way into The Temple of Ahn’Qiraj and ruins of Ahn’Qiraj.

The great desert fortress of Ahn'Qiraj, long sealed behind the Scarab Wall, is home to the insectoid qiraji, a savage race set to mount an assault to devastate the continent of Kalimdor. But something far more sinister lurks behind Ahn'Qiraj's walls: the Old God C'Thun, an ancient entity whose pervasive evil had suffused Azeroth since time immemorial.

Supplies are needed to fuel the war effort against the sinister forces of Ahn’Qiraj. You’ll need to work alongside other members of your faction to contribute the resources needed open the ancient citadel’s gates and begin your siege on the Ruins of Ahn’Qiraj and the Temple of Ahn’Qiraj.

Both Horde and the Alliance will need to bring a steady stream of supplies to the Valley of Spirits in Orgrimmar or to the Military Ward in Ironforge. Each turn-in will reward Ahn’Qiraj War Effort Supplies containing useful items and Alliance Commendation Signets or Horde Commendation Signets, which can be used to gain reputation with your faction.

While many of the necessary supplies can be obtained as loot drops or purchased from the Auction House, having a profession that helps you acquire these supplies will also come in handy. Here is a list of items you’ll need to set your sights on collecting.

Once the resources for the War Effort have been gathered by both the Horde and the Alliance, supply chains will make their way from Ironforge and Orgrimmar to Cenarion Hold in Silithus. Once these resources reach Cenarion Hold, players who are on the quest line to create the Scepter of the Shifting Sands will be able to undertake the “Bang a Gong!” quest in order to complete it.

During the War Effort, players will also be able to begin earning reputation with the Brood of Nozdormu by turning in Silithid Carapace Fragments. You’ll need to turn in the Head of the Broodlord Lashlayer to begin the quest “The Path of Righteous” or be deputized by another player who has Proxy of Nozdormu before these fragments will begin to drop for you.

Who Will Rise as Scarab Lord?

Players will also be able to begin a quest series to create the Scepter of the Sands, which will enable them to ultimately ring the gong on the realm they are on. The first player on each realm who completes the quest and rings the gong will become the realm’s “Scarab Lord” and receive the Black Qiraji Resonating Crystal, which will summon a ridable Qiraji battle tank that can be used in the outdoor world as well as within the Temple of Ahn’Qiraj.

Players who complete the Scepter of the Sands quest chain and ring the gong in the first 10 hours of the gong being rung initially will also receive the Black Qiraji Resonating Crystal.

Any other players who complete the quest line past the 10–hour period won’t receive the mount, but will still receive rewards from the “Treasure of the Timeless One” quest, which includes one of four epic weapons, experience, reputation, and a little money for your pocket.

Pushing Back the Enemy

Once the gong is rung on a realm, it will mark the beginning of a 10-hour war heralding the arrival of Anubisath and Qiraji warriors, which can be found in the Barrens and Thousand Needles (for lower-level players) and Silithus, Tanaris, and Feralas (for higher-level players). Defending against these incursions will give players a chance to earn gold, experience, and reputation with the Brood of Nozdormu, along with a higher chance for rare drops.

Opening of the Gates