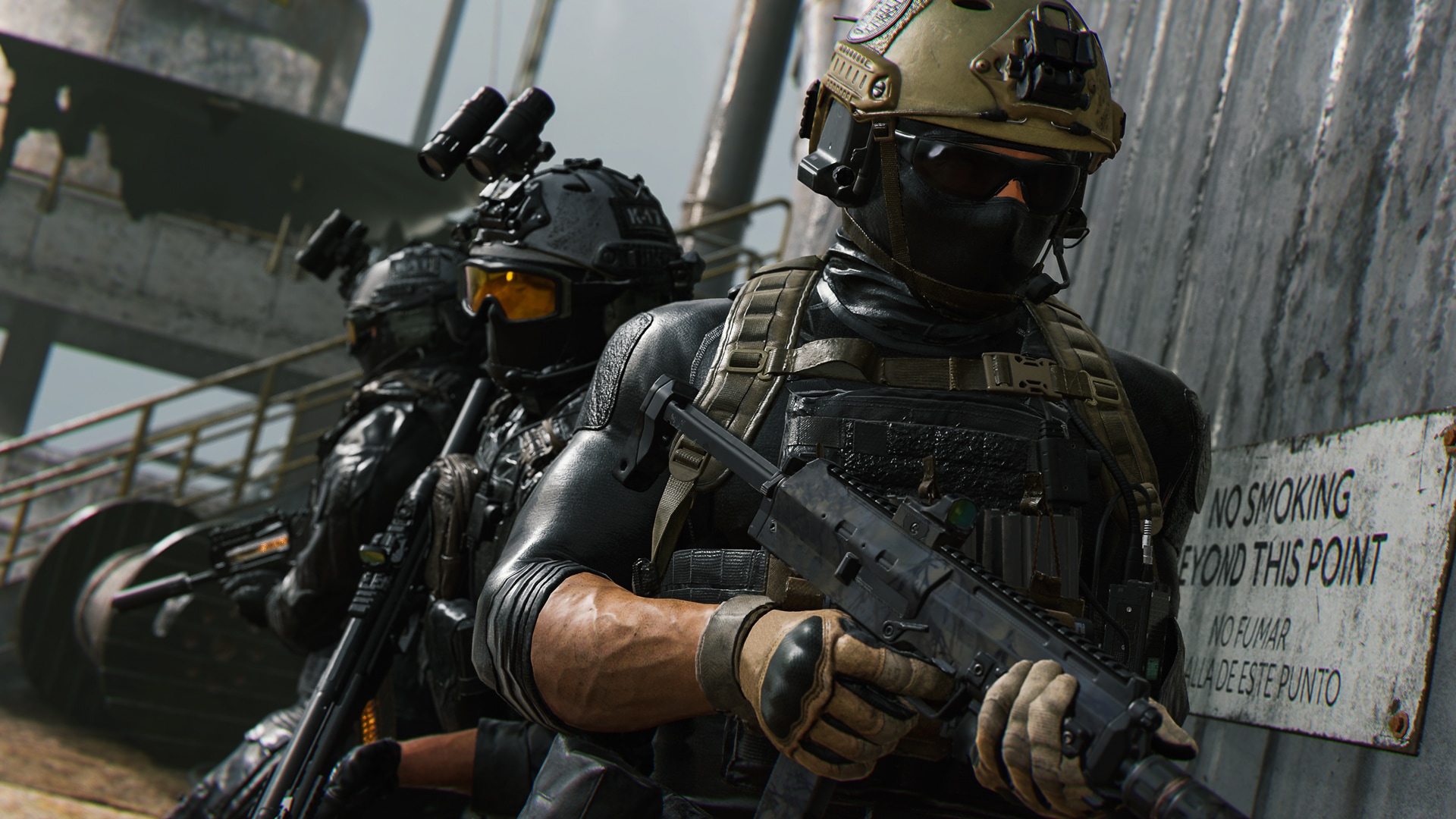 Twenty-four hours after the pulse-pounding reveal of Call of Duty: Modern Warfare II, the community got its first look at one of the game’s Campaign levels: Dark Water.

The Dark Water video is known as a “vertical slice” in game development: an internal “playable demo” that serves as a major pre-release milestone. It showcases a small game portion in its intended final state, highlighting core features, visuals, audio, and overall player experience for the studio, its publisher and – in this case – millions of fans to see what these developers want to make a reality everyone can enjoy.

In choosing this Campaign level to show off, Infinity Ward set the tone for what Modern Warfare II is: a visually stunning action-packed game that you’ll have fun with this October 28… or up to a week earlier if you digitally pre-purchase and take advantage of the Campaign Early Access. 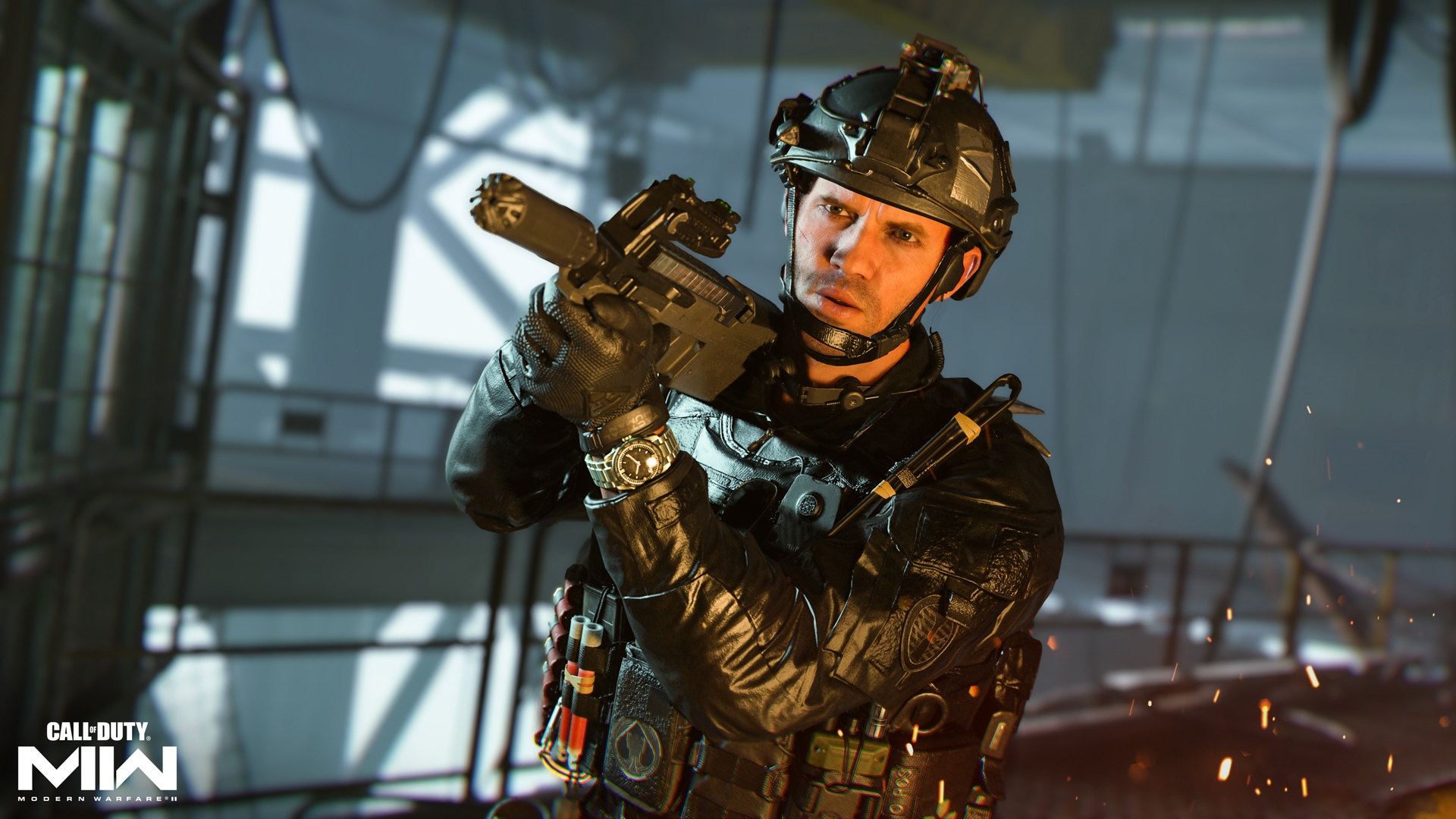 With the help of developers from lead studio Infinity Ward and partner studio Activision Shanghai, this is what went into making the Dark Water Campaign mission, and a glimpse into the creation of Modern Warfare II.

“Dark Water balances being completely realistic while being completely ludicrous,” said Rich Farrelly, Lead Level Designer who worked at Infinity Ward for nearly a decade. “You approach the [oil] rig, get up there, ascend, and that feels like Clean House in the last game [Modern Warfare® (2019)]: military guys doing military stuff. And then the second half of the level, you’re doing a ramp jump into the back of a moving ship – somehow we made it work together to make it pretty badass.”

From a game designer that brings up level ideas, to an artist that draws out a concept scene, to a producer keeping everyone on schedule and collaborating, to the QA tester who identifies critical issues, every member of a game studio is crucial to development.

“The animation team has to create the animations for the characters, boats, and faces. The lighting team has to go in there, light everything, and make sure you can see what’s going on. The VFX and Tech Art guys did the water and atmosphere… And even at the beginning, we created a concept paint-over that was our end goal of the look and feel of everything.”

That’s just what we see in the game – what about the audio? That too needs extreme precision and detail, according to Senior Lead Audio Designer Dave Rowe.

“Chris Egert, Sr. Sound Designer, prototyped some hydrophone microphone techniques on a lake and recorded a killer boat [sound] which is used in the intro and middle sections of the mission,” he explained. “We also needed rain, and a lot of it. Chris Staples, Sr. Sound Designer, recorded sounds of precipitation and implemented rain “emitters” throughout the mission. The results are exceptionally immersive as Chris explains: “As you are walking by things you hear and feel the rain around you in a realistic way. We recorded a lot of water movement and other sound design elements, and I got to use some of my own ocean wave recordings throughout the mission.”

If this was a traditional media piece – a film or TV show – the process would end there… But for a video game, it’s about making this realistic world playable, too. 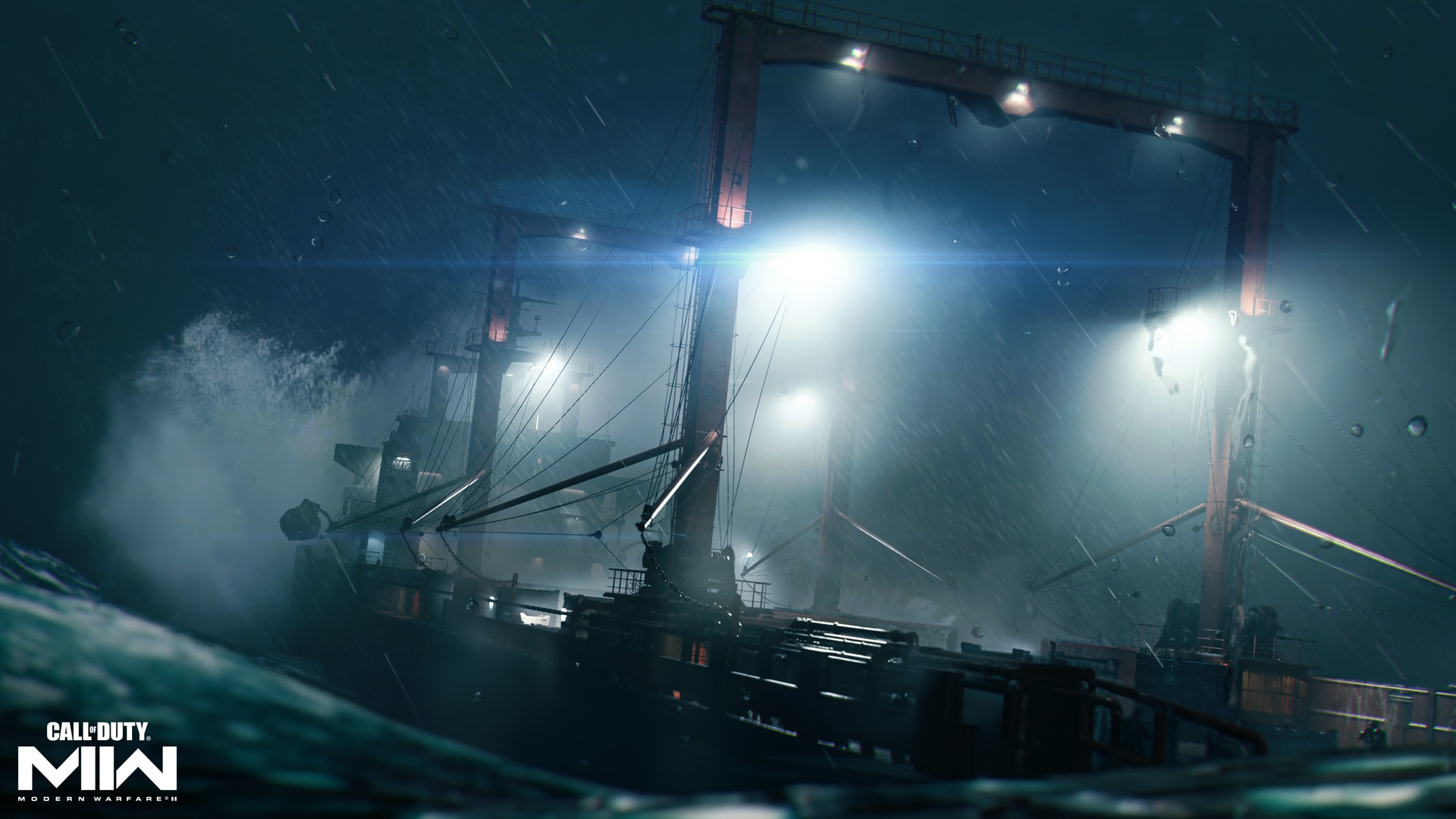 As April Friesen, a Designer at Infinity Ward who helped create this mission, described, the creation of the oil rig was relatively straightforward. Using footage of smaller oil rigs for a layout and speaking to their military consultants on how their teams would clear it, the team had one half of the level down…

“The cargo ship was a whole different beast,” Friesen said. “Almost every department had to help out to make this playable. We had to get [moving] containers to push the player, get AI to react to moving containers and path around them realistically, etc. Not only that, but the gameplay we aimed for required us to rip apart the ship we had already built to make it at least four times bigger, along with redesigning all of the combat to reflect the new space.”

“It’s way more complicated than it looks,” Farrely said. “We’re talking about the physics of these [scenic objects] moving back and forth, making their speeds of them feel right, making it feel like they have proper friction on the deck. That's visual surface level of it. Now we throw AIs in there and we have a gunfight – do they take cover? How do they know where the containers are at any given time? How do we control this whole thing?”

Make no mistake: game development is not easy. But together, this collection of veterans and fresh talent – coming together with experience from past games, film and TV production, and elsewhere – collaborate to make this all possible.

“There is tons and tons of iteration on this level,” said Patrick Hagar, a 16-year Activision veteran and Expert VFX Artist at Infinity Ward. “That work ends up benefitting other levels. Some of the big [water] splashes we put in for Dark Water – elements of that – might show up as boat effects elsewhere.”

“It’s also a lot of sharing where you are at with the team,” said Daniel Stern, an Expert VFX Technical Artist with an extensive commercial, TV, and computer science background. “Everyone chimes in and has different ideas, and that works great for us.”

“One of the great things about this project is that there is not a lot of wasted work,” Farrelly added. “That’s built into the schedule; this time around we said that everything we make is what we’re going to ship. We built mini-milestones into the schedule, and we have enough of those to where we can slowly bring the quality up until the end so we don’t have this steep hill to climb” during the final months of game production.

Improvements You Can See – and Hear

This world-class collection of talent worked together to create Dark Water – and the rest of Modern Warfare II – using its game engine. As mentioned at the game’s reveal, the team is using one unified Call of Duty engine across the franchise, starting with Modern Warfare ll and the next iteration of WarzoneTM, and builds upon the engine from Modern Warfare (2019) with the best tech from across the studios to deliver the most advanced engine ever in Call of Duty.

Dark Water shows off “the most advanced Call of Duty” yet; knowing the context behind that statement is as simple as taking a closer look – and listening – to realize how far the franchise has come.

Take Call of Duty®: Ghosts, another multi-generation game that numerous developers, including Farrelly, Harris, and Hagar, remember creating. Nearly a decade ago, Ghosts had its own water-based Campaign mission: “Into the Deep.”

Because of the technology available in 2013, it was well out of scope to create realistic water physics and graphics – along with, of course, that infamous Fish AI – while still having the technical resources and memory space to have the rest of the game run at the Call of Duty standard 60 frames per second.

“It was a cool experience, but it wasn't like real water,” Farrelly said. “So that was kind of a goal set by the team: to be able to create this new gameplay experience that we could spread across the different modes.”

Realistic water was a focus this year for Infinity Ward, and with the help of an updated engine, they were able to create something that would look authentic – as you were careening on an inflatable boat across it – across multiple platforms.

“The biggest thing that helped us with our lightning was the new shadow system,” Krzystof Wójck, Senior Lighting Artist, explained. “This project, the engine helped us introduce something called PCSS [Percentage-Closer Soft Shadows], which allows us to have soft shadows on high-end PCs but also next-gen Hardware too. There is also a lot of improvement in our volumetric rendering system to solve volumetric fog so it renders better with our ambient lights and stuff.”

This new engine also opens itself up to better sound capture, as Rowe said the audio team can now approach missions and other elements of the game like someone in Hollywood would mix a film.

“The mission is comprised of a lot of water sounds, which typically present mix issues because they are so wide-band and noisy,” Rowe said. “In order to avoid frequency masking of important commands and moments, we can use engine features like real-time mixing and natural limiting to help control the mix and focus the player on the important task at hand. This helps push the narrative and draw the player through the mission.”

But, of course, we know it’s something you just must feel to know this engine is the most impressive yet.

“We push the quality here for every game – we try to just make it more real and perfect,” Wójck said. “People sometimes say, ‘Oh it’s just another Call of Duty game,’ but it’s not. There is so much work that people are not aware of for AI, the environment, scanning, making lighting more realistic.” 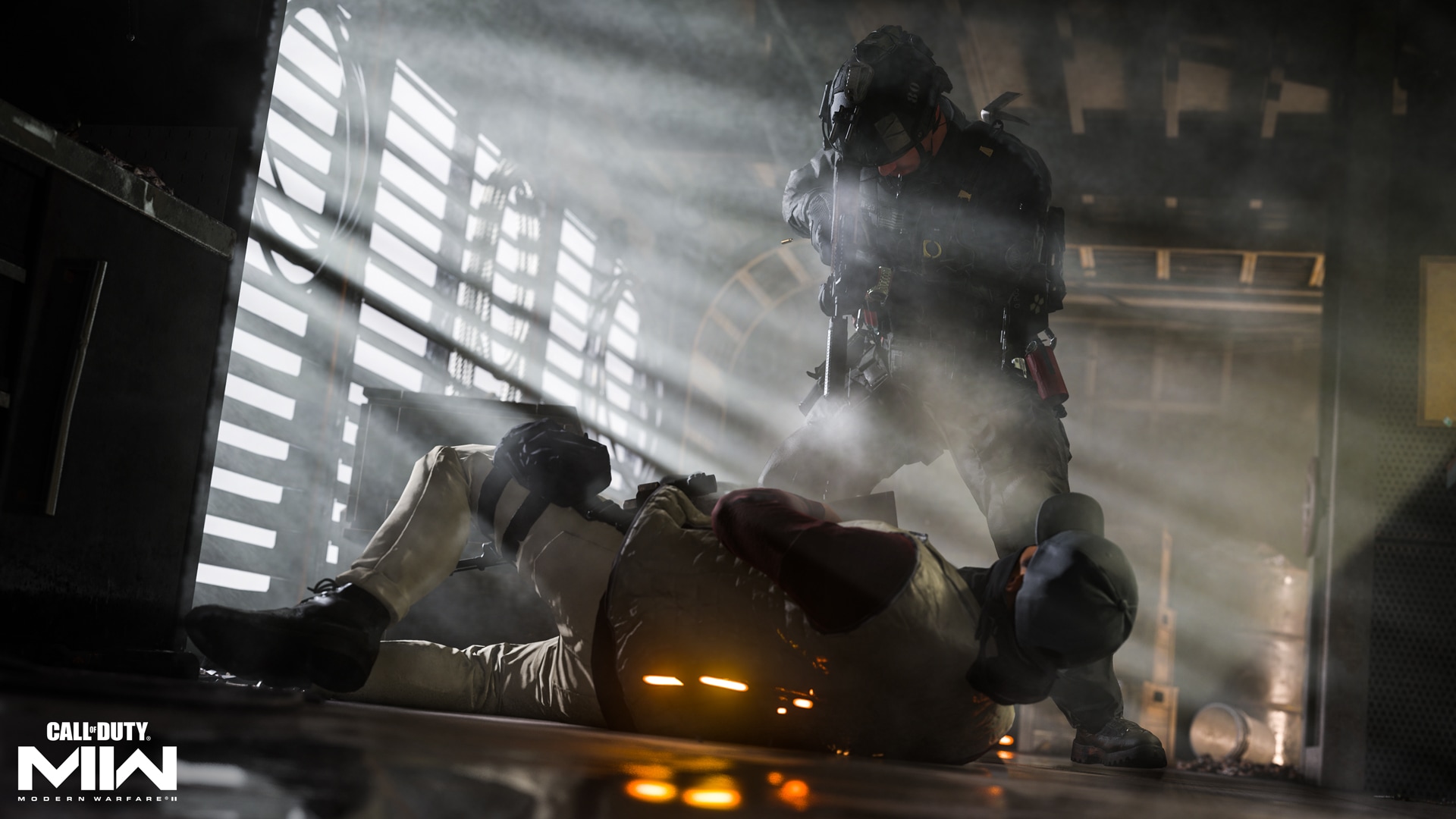 Making a game like Call of Duty takes more than just one studio; for Modern Warfare II, lead developer Infinity Ward partnered with Activision Shanghai among others.

“We don’t just throw some stuff over and say, ‘Do this work,’” Farrelly said. “All teams are invested in it; they give us feedback on what they think would work better. It’s a two-way street.”

Among other features and processes, Activision Shanghai is an instrumental part of getting the game’s textures, built via photogrammetry, into Modern Warfare II.

“All newly made textures were created by using high resolution scanned photos,” said Tigger Liang, Lead Level Artist at Activision Shanghai. “We achieve high quality visual performance by combining them and adding subtle details, but some required materials do not have a one-to-one corresponding basic scan files. Some textures are combined with fine tuning to achieve a higher quality visual performance. But no tool can replace an artist.”

Within the Call of Duty development process, artists from both studios – and others – worked to make Modern Warfare II have high visual fidelity while maintaining 60 FPS. Having developers around the world allowed the team to tackle this task, as Ying Huang, a Producer at Activision Shanghai, points out.

“The time zone difference won’t stop us from actively collaborating; it’s actually not a disadvantage from our point of view,” Huang said. “We take turns so tasks will be finished more efficiently.”

It’s this way of looking at work, spread out across global studios and in home offices during the pandemic, that allows Modern Warfare II to become the finely polished game you’ll be able to experience in less than 80 days.

“I’ve been doing this for over 20 years, and this team is probably the best collection of developers I’ve worked with in all-in-one place,” Farrelly said. “With all of us scattered across the four winds working remote, with the energy of this team, we’ve pulled an incredible game together.”

You can experience Modern Warfare II’s Campaign a week before the game’s official launch* by digitally pre-ordering or pre-purchasing it now on your platform of choice.

For a full run-down of everything you’ll receive, including all the Vault Edition*** rewards available during the Beta as well as content you can use right now in Call of Duty®: Vanguard and Warzone™, check out this blog.

For more about the team behind Dark Water, check out https://www.activisionblizzard.com/newsroom tomorrow as they get into the skills, disciplines, and collaborative efforts needed to pull off one of the most challenging Call of Duty missions yet.