Coming with our next major patch, Heroes of the Storm is launching a brand new system to celebrate and recognize incredible personal feats on the battleground. Play your heart out in every match and earn your place as MVP!

At the end of every match, excluding Custom matches, the game will automatically promote a player to MVP based on their performance in the match. All players will be eligible for the title of MVP and Awards, regardless of whether or not they were on the winning team, so be sure to try your hardest in every match to earn your place on the Award screen.

Of course, the MVP isn’t alone in performing heroic feats of strength on the battlefield. Awards will also be distributed at the end of the match to four other players who made significant unique individual contributions to their team. Just like the MVP, your skill will earn you a place on the Award screen, allowing others to commend your achievement, as well as a unique icon next to your name on the end-of-match Stats screen. Take a look at a few examples of some of the awards you could earn below. 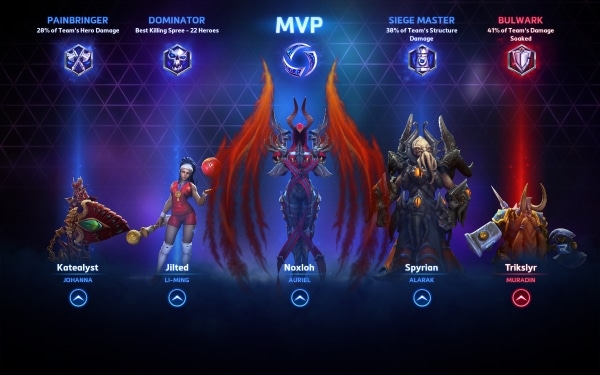 Instead of leaving it up to the game to completely decide who had the greatest or most impressive individual impact, we’re allowing everyone in the game to pick an awarded player to commend at the end of every match. Commendations serve as a virtual thumbs-up, recognizing the player that you thought earned some additional attention. By simply clicking the arrow underneath that player’s Award, you can boost them up and support their accomplishments for everyone to see. Allied chat will also be available for the duration of the Awards celebration, which should take about 15 seconds in total, so dish out commendations and say your congrats to any teammates who you feel deserved some praise! Players who receive enough commendations at the end of the match will be elevated to Epic or Legendary status and may even receive a little extra fanfare.

We hope you’ve enjoyed this preview of the upcoming MVP and Awards system. Good luck out there, Heroes, we’re sure we’ll be seeing you on the Award screen soon!