We’ve just released a new patch for Heroes of the Storm, which brings a new Hero, user interface updates, balance changes, and much more to the game. Maintenance is ongoing, but don't worry; we'll let you know just as soon as the Nexus is back online. 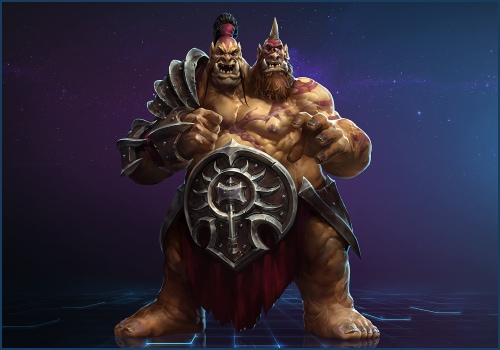 Cho’gall has Arrived to the Nexus!

Cho’gall has been added to Heroes of the Storm! This unique and powerful ogre is two Heroes in one body, requiring that two players team up and queue together as Cho and Gall.

Cho is a Warrior of unmatched might who charges fist-first into battle, controlling movement and Basic Attacks. While Gall cannot move on his own, he is a formidable Assassin armed with a devastating set of dark spells. Read on for a brief overview of their Abilities.

Developer Comments: Due to the way that our old level scaling system worked, early game level discrepancies created a larger difference in power level than we liked.  This often led to situations where a team could be up two or more levels early in a game, and use this advantage to create a larger lead.  We didn’t feel that games were fun for the winning or losing team in these types of scenarios.

As a result of these changes, all Heroes will have more power early, but gain less from each level.  Battleground Events, Minions, Mercenaries, and Structures have all been adjusted to compensate for this and should feel close to what they did previously.

The aim of these adjustments to the scaling system is to make level differences have a similar impact on your Hero’s statistics at all points in a game.  Now, each level offers about 4% Health and 4% damage, which mirrors what late game leads felt like in our previous version of the game.  It is important to note, that while being down a few levels will be less punishing than it was previously, Talent tier advantages can and will still have a noticeable impact on enemy engagements.

Developer Comments: In order to reward players for getting early game Takedowns, we’re also increasing the respawn time of dead Heroes at low levels.  Now, getting early game Takedowns (and the experience associated with it) won’t give your team as much pure power as it did previously. Instead, early kills will offer a “power play” moment, in which your team can destroy enemy Structures, complete Battleground Events, or take more Mercenaries.  These meaningful strategic advantages will position a team closer to victory, without giving them a large stat advantage and the ability to bully the opposing enemy team.

Developer Comments: We’ll be adding Towers of Doom to the map pool in an upcoming patch. This will expand the size of our map pool to 10 total Battlegrounds. To prevent the number of maps we have available to players in Quick Match and Hero League from being overbearing, we’ve decided to temporarily rotate out Haunted Mines. We feel the number of maps we have available are reaching a threshold that we may not be comfortable with.

Developer Comments: We wanted to make Gathering Power a more high risk, high reward talent that encouraged specific gameplay. Now, with a much higher cap, the reward for this talent is much higher. The counterplay becomes the burden of the opposing team, as they’ll need to focus the Hero who has Gathering Power to reset their stacks.

Developer Comments: Our Falstad changes were geared towards supporting Talent diversity. We wanted to make small changes while still providing a meaningful impact. The new and changed talents will add some higher skill options to confident Falstad players.

Developer Comments: Jaina having a 35% slow available at level 1 is very hard to play against, and resulted in a majority of Jaina players picking Deep Chill. This is a small decrease, but has had a positive impact on our playtesting.

Developer Comments: Focused Attack was providing Zeratul with a little too much burst damage. Now with the consecutive hit requirement, Zeratul will now gain a more substantial damage boost if he is able to stick to his target for a few seconds.

Developer Comments: Most Kharazim players pick Transcendence at level 1, and this is often the most powerful option regardless of the situation. We tuned up the other two options here to help provide Kharazim players with different options.

Developer Comments: Uther is highly contested at high levels of competitive play, so we wanted to target a few nerfs that would have a larger impact at that level. We also wanted to focus our changes on two abilities that offer very little counterplay for the enemy team.

Developer Comments: We wanted to remove the scaling damage and heal amount on Drain Hope, but knew the change alone would be a significant buff as much of the value is loaded at the end of the ability. In response, we lowered this value by 5% and also reduced the cooldown by 1 second.