Diablo® Immortal™: A New Plane Of Hell Opens For Mobile And PC On June 2

A battle for the ages draws near. The Burning Hells’ flames flicker and crackle in anticipation, an omen they seek to communicate—Diablo® Immortal™ is coming! On June 2, brave adventurers in most regions* will take up arms against the demonic forces of Skarn, Lord of Damnation, as they uncover events taking place between Diablo II and Diablo III.

Community feedback has been imperative to the development of Immortal and has influenced the game in many ways, as you’ll come to see. One recurring piece of feedback we especially took to heart was the desire to play Immortal on PC. Well, we are most pleased to announce this has been made a reality—in addition to releasing on Android and iOS devices, Diablo Immortal will also be free-to-play for Windows PC upon launch in Open Beta.

This is an especially proud moment for us to announce, as Immortal represents a handful of firsts for both the Diablo franchise and Blizzard. Upon launch, Immortal will be the largest Diablo game we’ve released, home to more distinct zones, unique encounters, and satisfying ways to cut down demons than ever before. Immortal is also the first Blizzard game to be built from the ground up for mobile, delivering the same AAA demon-slaying experience you love but to be played from anywhere.

Lastly, Immortal is the first MMOARPG Diablo game—providing the opportunity to socialize, play, and explore the world freely with other players in ways never previously experienced across the Diablo franchise.

*Diablo Immortal will become available for some Asia-Pacific regions in the weeks following launch.

It is important for us to assure you that Immortal will deliver an uncompromised AAA mobile experience when played on Windows PC. To assure this, Diablo Immortal will launch on PC in Open Beta. What this means is that you will be able to take the fight to the Burning Hell’s legions on PC upon launch with full cross-play and cross-progression support. During the PC Open Beta period, we will continue to collect player feedback, make changes, and fine-tune this version of Immortal until we feel it delivers a finalized experience for all courageous adventurers. With that said, we have already made a few adjustments to ensure playing Diablo Immortal on PC feels seamless for Sanctuary’s defenders. 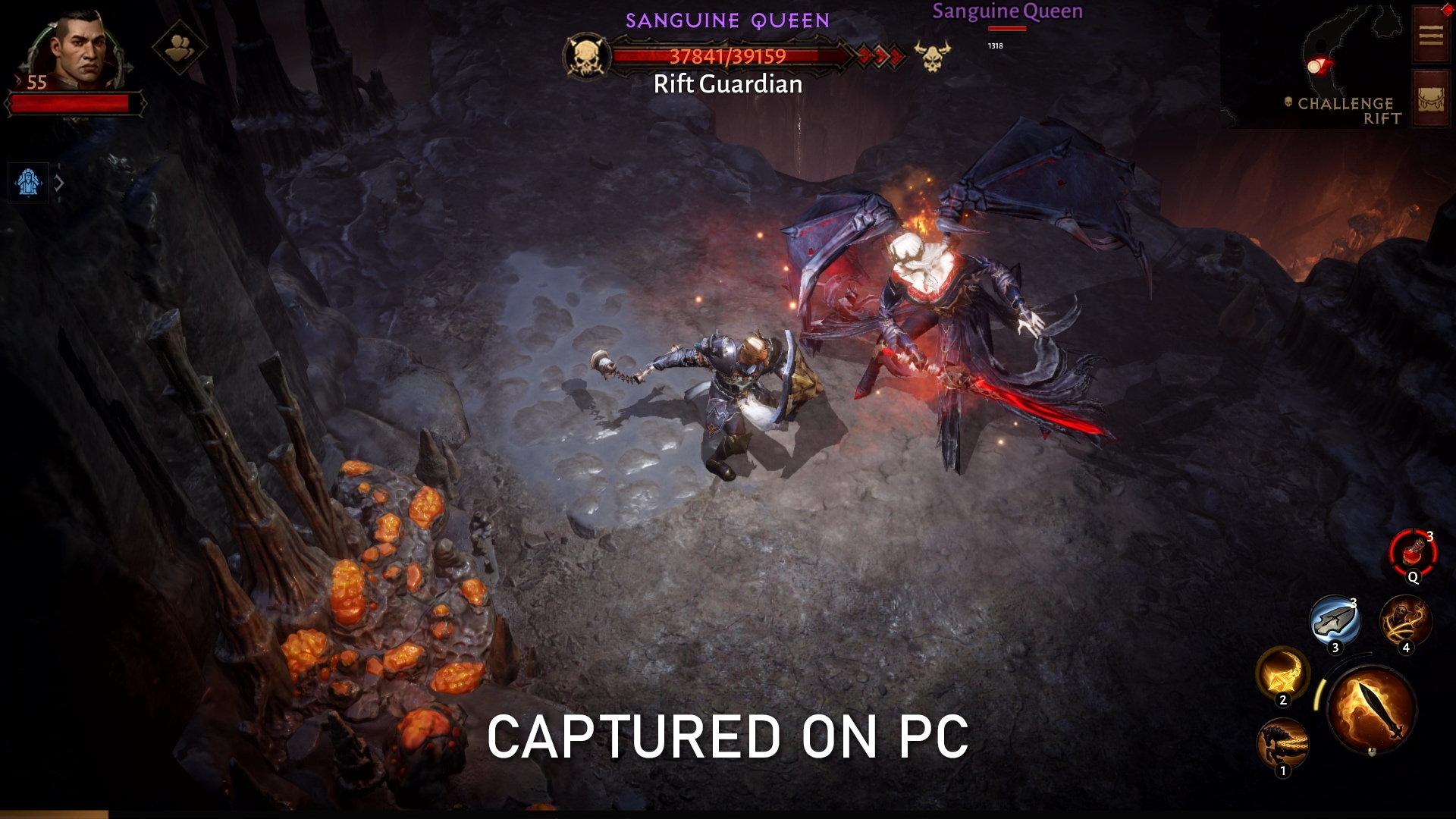 Wherever you may go, the opportunity to vanquish demonic invaders from Sanctuary shall follow—cross-play and cross-progression features between mobile and PC will make allying with other brave adventurers a breeze regardless of platform. When the PC version leaves the Open Beta period, all the progress and purchases you’ve made will be maintained.

Aside from ease-of-access, we understand that comfort is key, especially for those longer gaming bouts. To provide players with more ways to play, Diablo Immortal will host controller support for both PC and mobile. Since the Closed Beta, we’ve modified controller functionality so adventurers will now use a free-cursor reticle controlled with a thumbstick to navigate menus. To type messages in-game, a touch screen or keyboard will be required. Providing you with the most optimal experience when using a controller to protect Sanctuary is a priority of ours, so after Diablo Immortal launches, we will continue to improve controller support.

Additionally, the W/A/S/D/ directional keys may be used to move around the map for PC—a first for a Diablo game. And of course, you can still use mouse and keyboard to explore, loot, and keep Hell’s nightmares at bay.

For more information about Diablo Immortal on PC, visit our Making PC blog.

The time to assume the mantle of Barbarian, Crusader, Demon Hunter, Monk, Necromancer, or Wizard and fight for the fate of Sanctuary is closing in. As you ponder which class to walk the streets of Westmarch and beyond with, you may also be wondering—what dangers, or delightfully exciting challenges, will be available at launch?

As you progress through Immortal’s story, you’ll traverse eight expansive zones, each with their own hellish styles. But don’t worry, the gates of Hell have been left open for the potential addition of more zones and content. While taking in the sights and felling demonic hordes in your wake, you’ll stumble across dangerous live events where all battle-hungry adventurers on the same server can team up to defy the odds and claim victory over the Burning Hells. And once you’re ready to tackle the Helliquary, our eight-player raid experience, you’ll be delighted to know formidable foes and alluring loot await, with more to come across monthly free content updates.

Adventurers, we would like to thank you for your feedback across past Diablo Immortal Alphas and Betas. Much of which the Diablo Immortal team has used to make changes that will help provide the best playing experience possible. We cannot wait for you to heed the call on June 2!

Q. What are the differences between PC Open Beta and Mobile?

A: The main differences between playing Diablo Immortal on PC in Open Beta and Mobile will be seen in the UI and controller functionality. As we adjust these aspects during the PC Open Beta, they may create slight differences in the gameplay experience, but you can be assured that our intention is to replicate the same AAA experience on mobile for PC.

A: When the PC version leaves the Open Beta period, all the progress and purchases you’ve made will be maintained.

Q. What do we plan to improve for PC?

A: During the PC Open Beta period, we will continue to collect player feedback, make changes, and fine-tune Immortal for PC until we feel it delivers a finalized experience for all courageous adventurers.

Q. Which regions will Diablo Immortal become available for on July 7?

Q. How will cross-play and cross-progression function between PC and mobile?