StarCraft® might seem like a whiskey and cigars universe, but terrans have carted cans of Pabsch and Zerg beer with them to the most unpredictable corners of Koprulu. It’s only fitting that we bring their pastime home to Earth.

At BlizzCon on November 2-3, 2018, we’ll be serving up four (4) different con-exclusive StarCraft 20th anniversary beers with our friends at Bottle Logic: one for each classic StarCraft race, and a special commemorative anniversary ale.

To celebrate 20 years of StarCraft, these stellar beverages—Haze of Adun Hazy Pale Ale, Nydus Nectar Tart Ale, and Stimpack Stout—are available to sip at stations around the Anaheim Convention Center and at the neighboring Anaheim Marriott hotel bar while supplies last (note that alcohol sales in California require identification proving that you are age 21 or older).

In addition to draft pours at the aforementioned locations, you also can take away Power Overwhelming IPA in cool collectible cans from both the Anaheim Marriott and Hilton hotels. 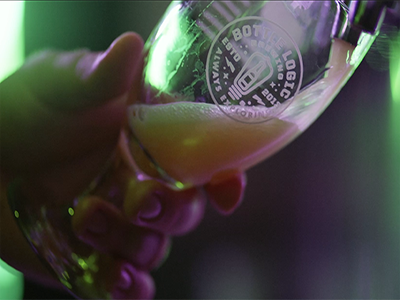 StarCraft’s 20th anniversary commemorative beer, Power Overwhelming, is a soft, tropical, deliciously easy-to-drink IPA in a limited-edition collectible can. While it won’t help you fuse into a supernal consciousness bent on eradicating the enemies of Aiur, you and a like-minded friend can line up your cans to show off both sides of a wraparound label that’s greater than the sum of its parts.

Haze of Adun’s pure and shining golden hue was inspired by the armor elite templar wear into battle. Its downy mouthfeel and juicy citrus bitterness might fill you with the very same psychic relaxation that washes over protoss warriors after victory against the zerg, or that might be a complete stretch. The beer’s still delicious.

Nydus Nectar is a tart berliner weisse brewed with heaps of fresh blueberries and raspberries to produce a distinctive, brilliant purple hue. Its aroma brings to mind the humid primordial funk of Zerus, and it tastes much, much better than disgorging dozens of zerglings from your tunnel-sized maw. 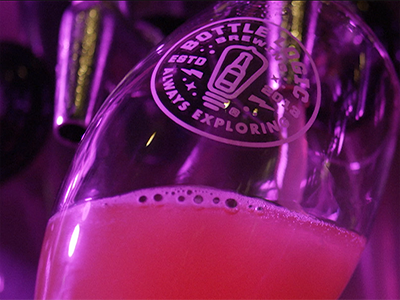 2018 marks our third beer-brewing adventure with Bottle Logic. Previous years have brought us Inner Geek Blizzard anniversary ale, Warcraft® anniversary Thunderbrew, and Diablo® anniversary Horadric Ale and Dark Wanderer stout. The more we work with Bottle Logic, the more we discover everything we have in common—similar commitments to quality, similar fixation on the craft (of everything from bottle labels to box art), and mutual appreciation for beer and games.

Starcraft Production Director Tim Morten describes the brewing process with Bottle Logic as extremely gratifying—they’ve invited members of the StarCraft team to give input on original concepts, to help tune the flavor profiles of each beer, and even to help decide on specific brewing techniques.

Bottle Logic Co-Founder Brandon Buckner describes beer iteration as similar to game development—a lot of talking, trying different ideas out, and learning as a group while an idea slowly takes form. “It’s kind of wild to think about the overlap there, and then to see the overlap of beer-fans and Blizzard fans connecting over our collaboration at BlizzCon” he says. “It’s really been a blast to have built so many great friendships with folks on the Blizzard teams.”

Want to know more? Check out a Virtual Ticket video about our collaboration with Bottle Logic. 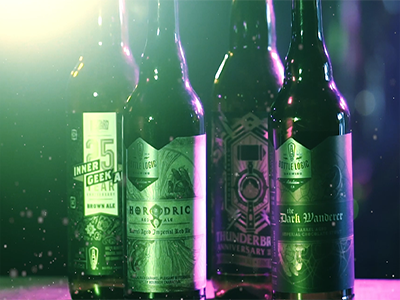 Like all our geekery, beer geekery at Blizzard manifests in a variety of ways. Our company beer mailing list hosts discussions of favorite styles and recommendations for must-visit brewpubs throughout the world. We’ve even been known to set up the odd team bottle exchange—the StarCraft team’s running Thursday afternoon beer share is affectionally called “False Start.”

We’ve even gotten our friends at Bottle Logic in on the action—after collaborating on Thunderbrew for BlizzCon 2014, we farmed out the original recipe to Blizzard employees in a homebrew competition, judged by Bottle Logic’s brewmeisters. Buckner remembers one of his favorite employee-brewed variants featuring peppercorns harvested from the Blizzard Irvine campus, and another that pumped up the base beer with chai spice.

The Bottle Logic half of our fun-development archon hasn’t been shy about their gaming proclivities, either. After seeing StarCraft’s cinematics for the first time (which he says “totally blew his mind”), Brandon begged his parents for a year to get his first computer so he could play it. He’s enjoying StarCraft II’s co-op mode as we head into BlizzCon. 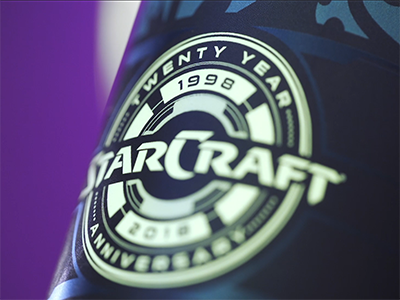 See you at BlizzCon!

The Anaheim Convention Center at BlizzCon 2018 will be the only place to get cans of Power Overwhelming and pours of Nydus Nectar, Haze of Adun and Stimpack Stout. Even if you don’t plan on attending the con, you can still stop by the Hilton, Marriot, or one of the convention center's outdoor beer gardens to celebrate with us.

And, if you’re in town for more than just the duration of BlizzCon 2018, stop by Bottle Logic’s tasting room in Anaheim to try their latest. They don’t have a Blizzard arcade cabinet, but obviously, iteration's key there too.