Welcome to Call of Duty: Vanguard Zombies — Q&A With the Treyarch Team 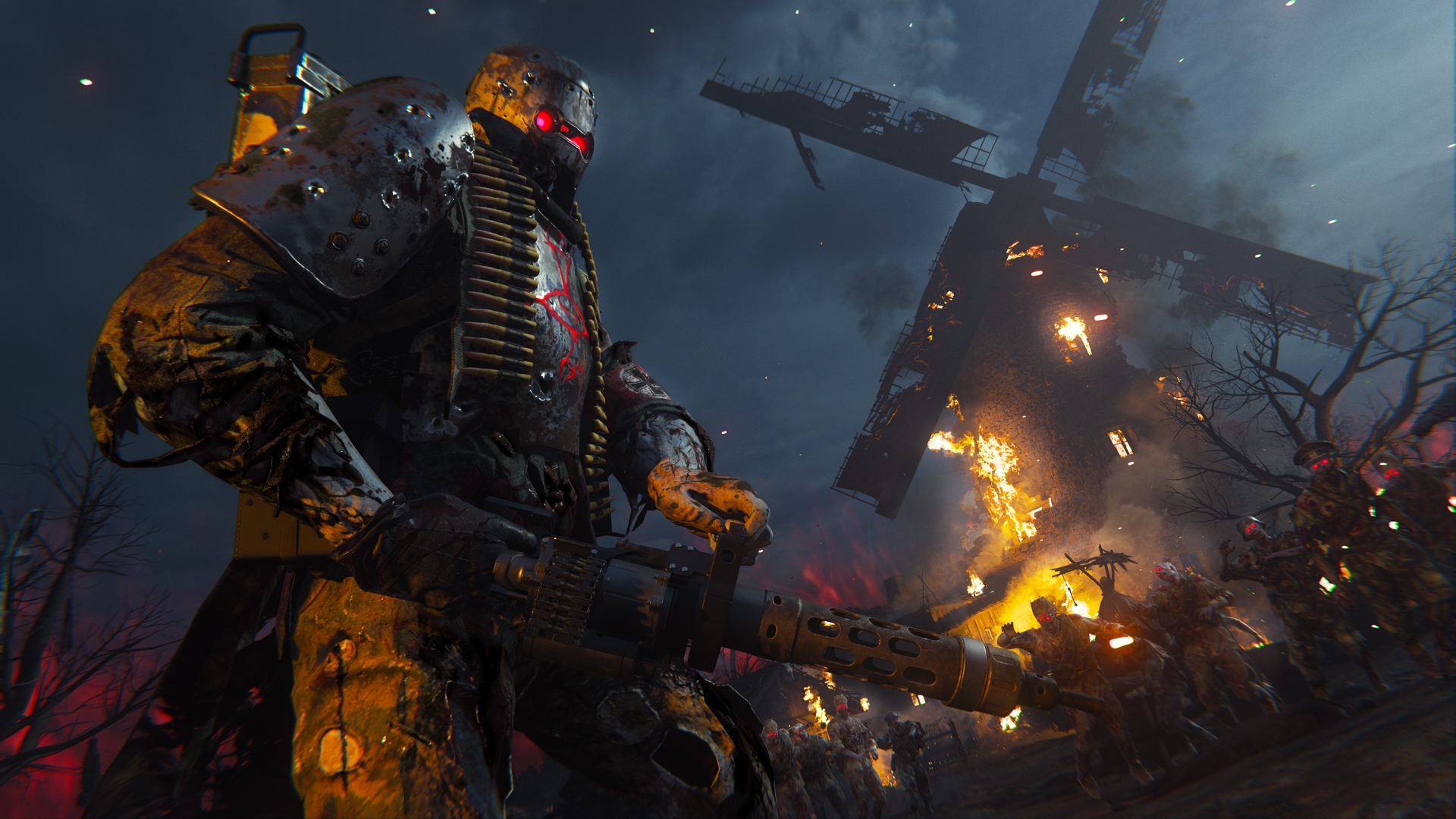 Incoming call from Professor Gabriel Krafft: there’s a problem in Stalingrad. A big problem. It appears the Nazis have found some other way to win this damn war... and unfortunately for us, they’ve made a deal with a Dark Aether entity in an attempt to secure victory for the Third Reich.

Prepare for the biggest fight of your life. When Call of Duty: Vanguard releases on November 5, our Special Forces operatives will need all the help they can get to survive the undead. To help us further wrap our heads around the next chapter in the Dark Aether story, we spoke with Lead Writer Craig Houston, Senior Writer Tony Bedard, and Associate Director of Design Gavin Locke at Treyarch, the studio behind the Dark Aether Zombies universe, as we dig into the story and gameplay of “Der Anfang.”

Let’s get right to it:

The Story of Vanguard Zombies 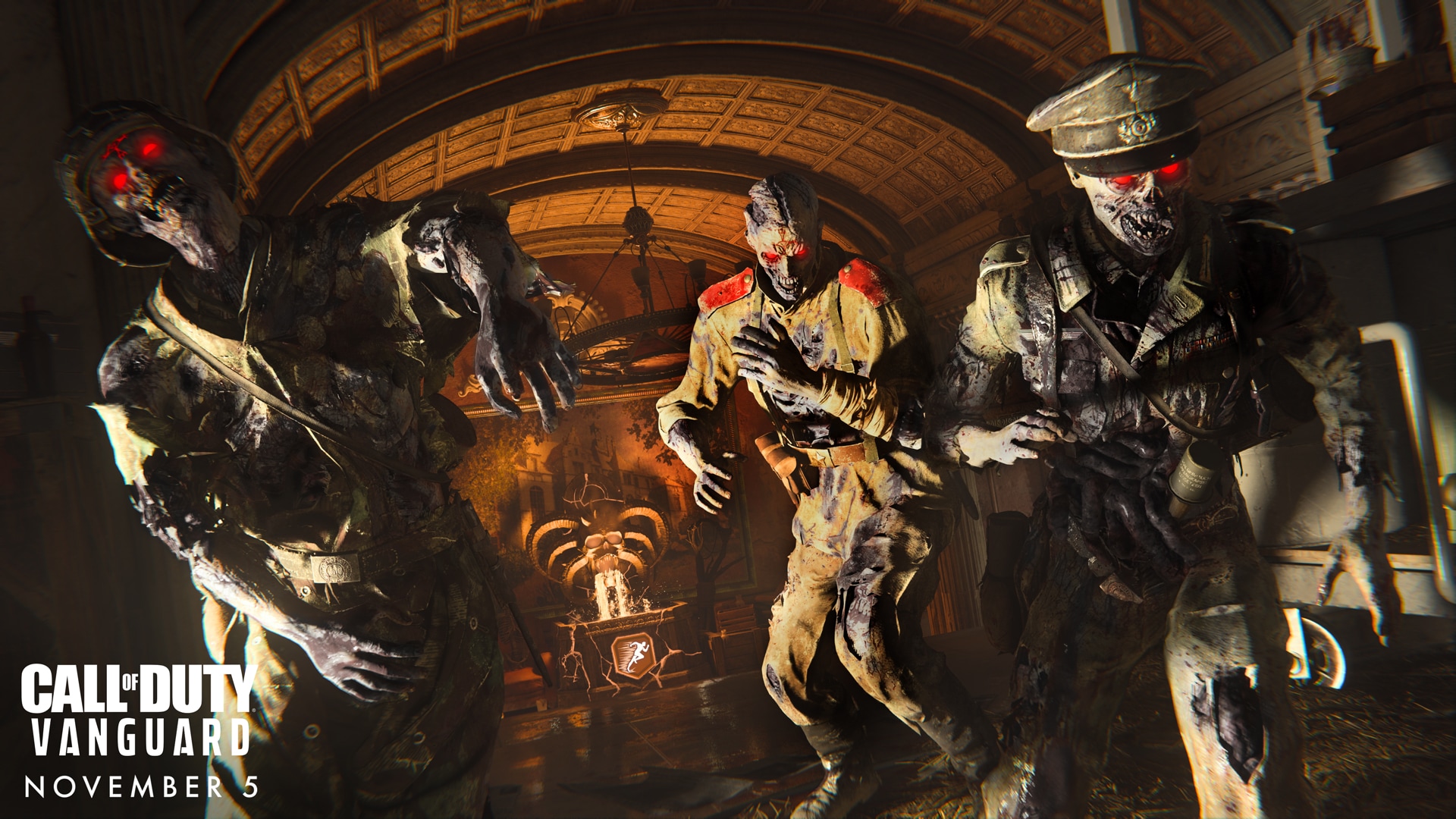 How does Vanguard Zombies progress the Dark Aether storyline?

Vanguard Zombies reveals that entities from the Dark Aether dimension had contact with humans, going back centuries. We’ll get a better sense of what was happening in the Dark Aether before the events at Projekt Endstation changed everything.

In fact, the cyclotron incident at Endstation is what sparks the events in Vanguard Zombies. The dimensional breach activates long-dormant artifacts collected by the Nazis, granting SS commander Wolfram Von List an opportunity to bond with a lord of the Dark Aether and single-handedly win WWII for the Third Reich.

Only a small band of Allied Special Forces soldiers who have forged a similar bond with their own Dark Aether entities stand in his way. So, we have new characters in a different setting than in Black Ops Cold War Zombies, but the same level of high stakes with global implications.

Who is this new villain?

Our main villain is Oberführer Von List, commander of the SS battalion Die Wahrheit. His soldiers have plundered the globe for mystical items, and their search paid off with an artifact that has symbiotically bonded Von List with a former lord of the Dark Aether, Kortifex the Deathless. Kortifex shares his power to reanimate the dead, and now the world is in danger of being overrun by an army of Nazi zombies.

Who are the other Dark Aether entities?

Norticus the Conqueror once led Kortifex’s armies in the Dark Aether — now they’re sworn enemies. Saraxis the Shadow is a witty, wicked trickster who sees humans as playthings. Inviktor the Destroyer is the ultimate frontline fighter, at home in the thick of battle and always out for blood. Bellekar the Warlock is a master of Dark Aether rune magic, fascinated by humans and their warlike ways. Players will learn more about these entities and their revolt against Kortifex as they progress deeper into the game.

How do our human characters interact with these entities?

When a human interacts with one of the artifacts, they form a connection with its corresponding Dark Aether entity. Each of them gives access to a different ability. Pick up the Sword of Inviktor and gain his Ring of Fire attack. The Mask of Bellekar grants her Aether Shroud power, the Horn of Norticus grants Frost Blast, and the Dragon of Saraxis grants Energy Mine.

In addition to sharing their valuable combat abilities, these entities will guide players, encouraging them in battle and assisting them through various challenges in iconic locations.

How do our Special Forces operatives fit into this?

The Vanguard Special Forces have come to Stalingrad in response to a distress call sent by Professor Krafft, a demonologist blackmailed into the service of Von List. As a matter of fact, players may have already discovered some pages from Krafft’s diary during Black Ops Cold War Zombies, if they looked in the right places!

The soldiers find themselves trapped inside a containment spell conjured by Kortifex. Cut off from their superiors, they must fight against overwhelming undead forces, with Krafft guiding them over radios as their Dark Aether “partners” speak to them telepathically. It all retains a very World War II military feel, but with a unique fantasy/horror edge.

How does this affect the setting of Vanguard Zombies?

We are in iconic World War II settings, including the ruins of Stalingrad, the war-torn farms at Merville, the rooftops of Nazi-occupied Paris, and the Japanese army camp at Shi No Numa. All of these locations, trapped within Kortifex’s barrier spell, have dark, disturbing visual touches. There are piles of exhumed corpses in Stalingrad, shrines and sacrifices atop the Hotel Royal, with skulls and runes everywhere you look. 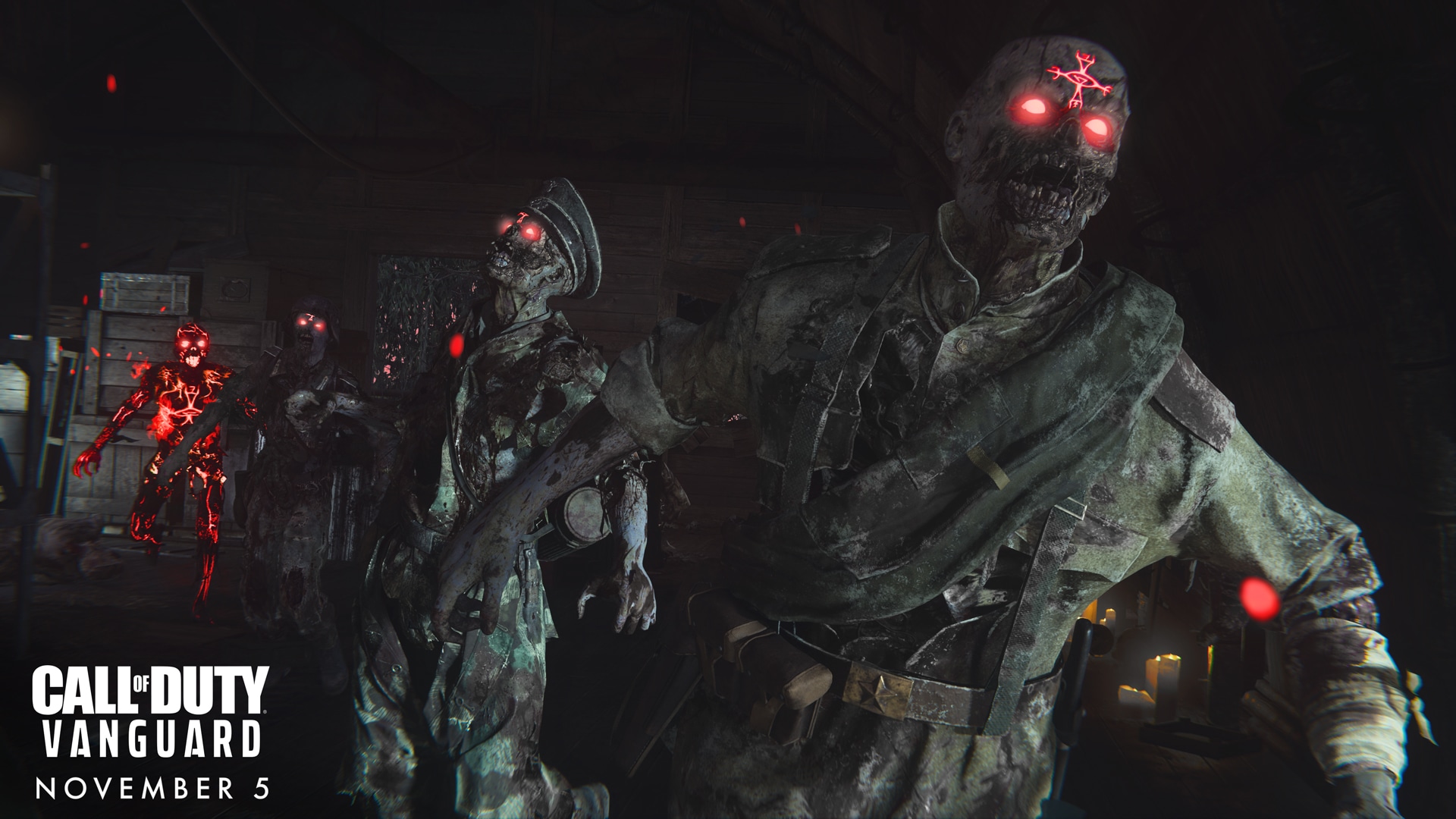 Describe the start of a typical match.

The match starts right in the center of Stalingrad. There is a small starting area where you can fight zombies, access several upgrade machines, view the initial three objective portals, and a few other surprises. The player’s first big decision is on which objective portal to interact with.

On day one, there will be three objectives available to the player: Blitz, Transmit, and Harvest. For shorter matches, players will want to pick and choose the objectives and locations they feel they will have the best chance of succeeding in, or focus on opening up the portion of the map that contains the Perks they prefer. For longer play sessions, players will need to plan more thoughtfully to open up even more of the map and aim for personal records.

What kinds of enemies will players encounter?

The first enemies that players will encounter are the basic zombies, reanimated by Kortifex and Von List. While these zombies start off very manageable, their health, speed, and attack power will increase as the match goes on.

After a few objectives, the explosive Boom Schreiers begin to show up, a kind of sprinting proximity mine that can be very deadly. Then you’ll start to face the Sturmkreiger — an 8-foot-tall monstrosity armed with a machine gun. You’d better find cover fast when engaging with them… they won’t hesitate to mow down the horde to get at their target.

What happens when players complete an objective?

Completing objectives is core to the gameplay loop, awarding Essence and Salvage, which return as two crucial in-game currencies. Additionally, and more importantly, the player is rewarded with a Sacrificial Heart, used to gain buffs at the new Altar of Covenants.

The Mystery Box will also increase in power over time, giving players a random chance of really boosting their power. New Perk Fountains will become available as the map opens up. After the fourth objective has been completed, players will gain the ability to start the optional Exfil event, allowing them to end the match successfully at their own pace.

How does the Altar of Covenants work?

The Altar of Covenants is the main method for a player to truly define their gameplay build for that round. After every objective, players are rewarded with a Sacrificial Heart to spend at the Altar of Covenants, offering a wide variety of randomized upgrades to choose from, such as Ammo Gremlin, Brain Rot, or Unholy Ground. The Altar of Covenants also provides Covenants of increasing rarity and power as the match goes on, so keep an eye out for those Legendary Covenants as you survive further into the game.

How does that change up the core gameplay?

The Covenant system allows players to lean into a specific playstyle. As an example, there are viable player builds that lean into melee and Equipment use over guns. This would be a build utilizing Bloodlust (melee attacks do more damage and heal), Mother Lode (a chance to keep Equipment after use), and Splatterfest (enemies killed by explosions have a chance to explode). Also, since the player only has access to a few Covenants at a time, they may choose to alter playstyles mid-game because of a Legendary Covenant that becomes available later on!

What kinds of weapons will players use in Vanguard Zombies?

Players will have access to just about all of their World War II favorites for both weapons and Equipment. Players load in with their Primary Weapon and Artifact of choice. This time around, however, players will need to earn backup weapons by looting chests, killing zombies, and gambling on the Mystery Box in place of traditional Wall Buys. You’ll also see the return of the fan-favorite Monkey Bomb!

How long does each match last?

Most matches can end with a successful Exfil in about 20 minutes. This means completing four objectives and then surviving the Exfil event. However, only a portion of the full Stalingrad hub will be open at this point. For the players who want to push on to deeper runs, we’ll see how long those matches last…

How is each experience different overall?

Every time players enter a new match, the objectives, their locations, and the Covenants provided will all be different compared to the match before. This is where players will need to adapt their playstyle to the tools at hand, which varies up the gameplay in new ways.

Playing with other players cooperatively also mixes this up. Do you define roles so that only one player is using a Covenant slot on Resurrectionist? Or does each player try to maximize their offense and hope for the best?

What can casual/first-time Zombies fans look forward to in “Der Anfang”?

“Der Anfang” combines elements of classic round-based Zombies maps with the objective-based gameplay mechanics introduced in Black Ops Cold War, along with fresh innovations we’ve never seen before in Zombies. The result is a fast-paced experience that plunges players right into the action.

First-time players can start shooting zombies just moments after the match starts. Everything is right there for players to complete objectives, earn rewards, and upgrade weapons and abilities against ever-strengthening foes. And if you’re a casual player wanting to keep your match brief, or just looking to end a match with a win, you’re given the option to Exfil, safely leaving combat with bonus XP and a feeling of accomplishment.

What can hardcore Zombies fans look forward to in “Der Anfang”?

There’s a lot in “Der Anfang” that will feel familiar to veteran Zombies players… and there’s also plenty that’s brand-new. The more objectives that players complete, the further they can upgrade weapons, armor, abilities, and so on. As they go on deep runs into varied and challenging play spaces, it really takes on the relentless excitement of higher rounds in classic Zombies maps.

Stalingrad, Paris, Merville, and Shi No Numa also feature a lot of interactable radios and Dark Aether runestones that contain Intel recordings, further fleshing out the characters, locations, and backstory of this chapter of the Dark Aether saga. That story will continue to evolve after Vanguard launches, taking players to new locations with new objectives and new characters. Veteran players have a lot to look forward to in this brand-new Zombies experience. 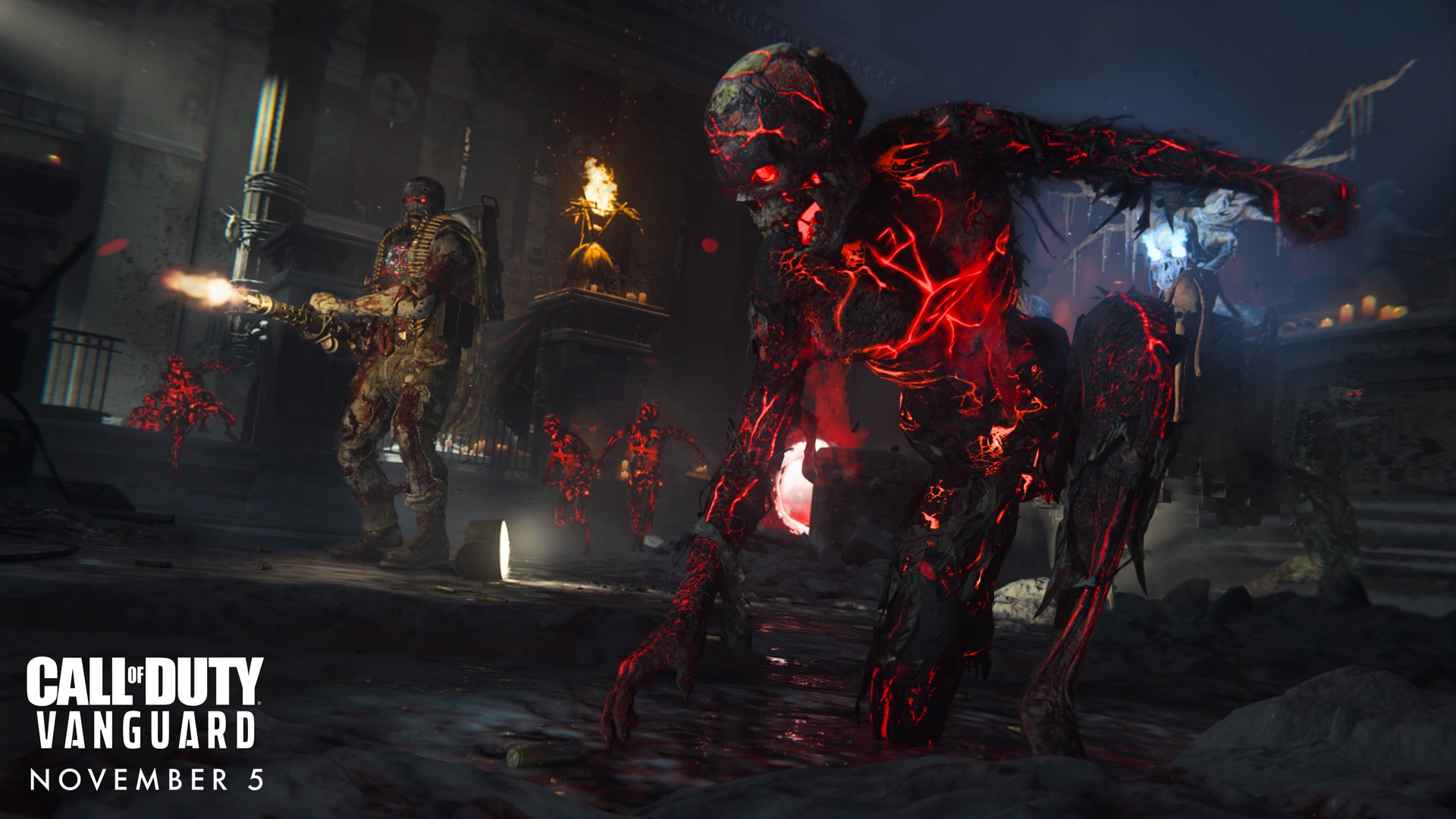 Battle against Von List and Kortifex the Deathless when Vanguard launches on November 5. Visit the Battle.net Shop to digitally pre-purchase now and get the Arthur Kingsley Operator and “Night Raid” Mastercraft SMG for use in Call of Duty®: Black Ops Cold War and Call of Duty®: Warzone™ now.

Check the Activision Games Blog regularly for more updates and information on Call of Duty: Vanguard.