While IEM Katowice, WCS Winter, and GSL are in full swing, we are pleased to share the rest of our 2019 plans for the StarCraft II World Championship Series (WCS). Here’s a visual representation of the overall ecosystem: 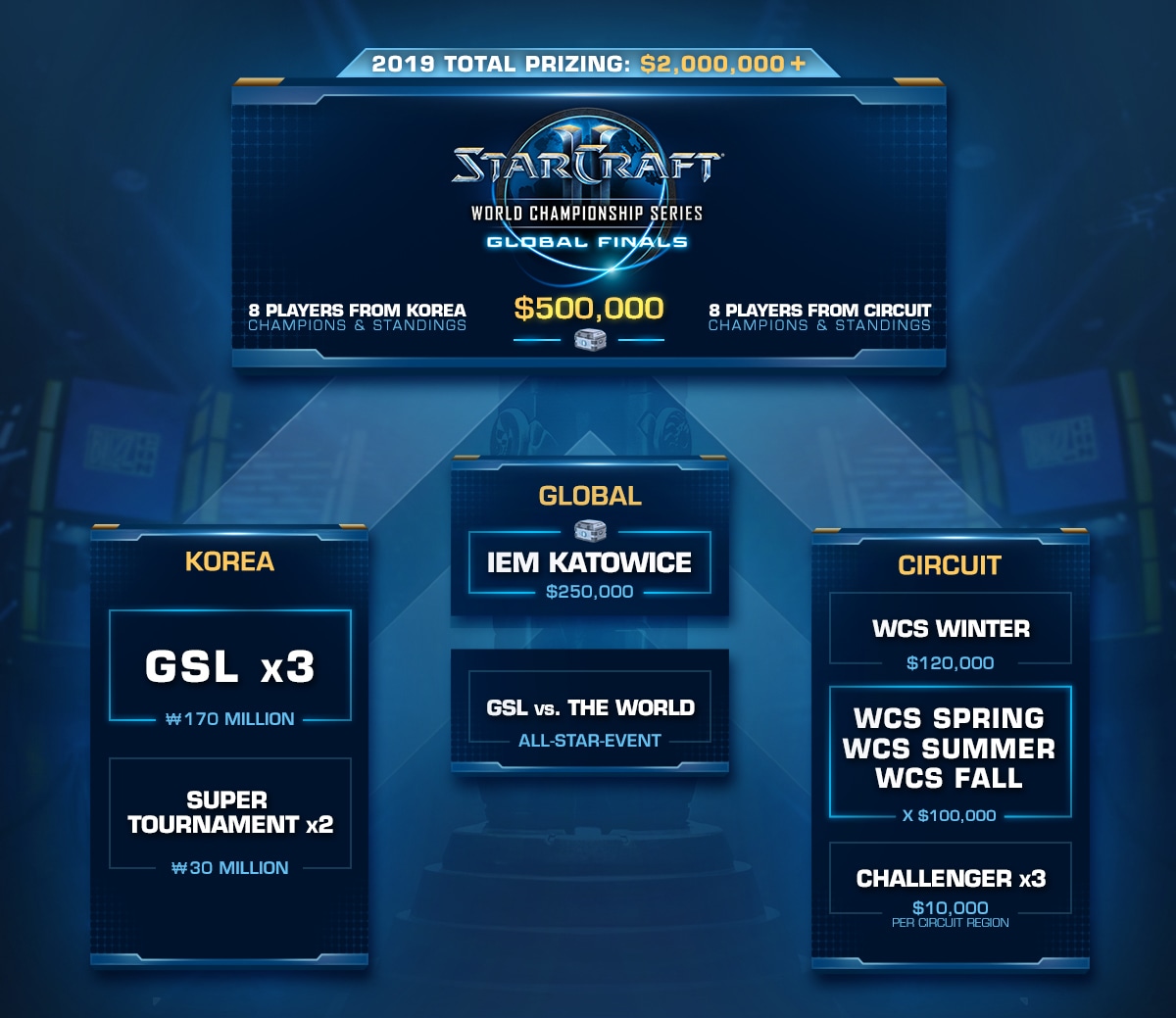 WCS 2019 is much like last year, with a few notable changes. WCS Winter is our first Circuit event of the year, followed by WCS Spring, Summer, and Fall. WCS points will be distributed at these events, alongside WCS Korea (Global StarCraft League), and two global events—IEM Katowice and GSL vs. The World. Furthermore, all of these tournaments will culminate at the WCS Global Finals at the end of the year. For a closer look at how the year will shake out, check out our schedule. The total prize pool is more than USD $2 million globally.

The StarCraft II World Championship Series (WCS) has three WCS Circuit stops in 2019. In addition, a new event to kick off the season is currently underway: WCS Winter. For WCS Spring and Summer, we will be partnering with StarLadder to bring you two live events in Kiev, Ukraine. We are excited to be returning to Ukraine for two majors, for the first time since MMA won an IEM championship against DIMAGA in 2012. For WCS Fall, we will once again be bringing a WCS Circuit event to fan-favorite DreamHack Montreal. We will have more details about the WCS Circuit, including qualification events and ticket sales, later in the year. For details about WCS points allocation, see the official ruleset. Finally, the full Circuit will be presented in 1080p resolution for the first time!

Now in its ninth year, the Global StarCraft League (GSL) is back. 2019 will see three seasons of play, along with two Super Tournaments. The GSL has been a staple of StarCraft II esports, and we’re pleased to be working with AfreecaTV to bring you the best Korean StarCraft on display with the broadcast you know and love. Additionally, GSL vs. The World will be returning as the second global event of the year.

We tested a rule change for players competing in Season 1 of GSL, restricting them from participating in Season 1 of WCS Challenger. Our goal was to limit the number of WCS Circuit players who would compete in the Korean tournament, but instead it caused all but one of the registered Circuit players to pull out of the GSL competition. That was not our intention, and we are rolling back this rule for Season 2 and 3, bringing the residency rules back to as they were in 2018.

At the end of the year, the best players from the WCS Circuit and GSL will meet at the WCS Global Finals, with a prize pool of more than USD $500,000 up for grabs. In addition to this base prize pool, we plan to release a second War Chest later this year to raise the stakes even further.

We are very much looking forward to a new year of StarCraft II esports. 2018 was incredible for all of us—perhaps Serral most of all—and we can’t wait to see what new stories StarCraft will give us this year. Follow @esportstarcraft on Twitter and stay tuned to the WCS website to keep up to date with all the events on the card for 2019.