Echoes of Echo: A History of Hero 32

You’ve seen her before: a sleek, cyclopean omnic, hovering in the backlines of the earliest Overwatch roster art. You’ve heard whispers of her progenitor: Mina Liao, one of the founders of Overwatch, her expertise invaluable to Jack Morrison, Gabriel Reyes, and Ana Amari against the looming threat of the Omnic Crisis. Now, she’s finally here—Echo, the 32nd hero to join the ranks of the Overwatch roster.

“Echo is a really special character for us in that our players have known about her for a very long time,” says Overwatch’s Game Director Jeff Kaplan, his fondness for the game’s newest hero evident, like a parent speaking about the child they’ve watched grow up and just sent off to college. “Players had actually seen Echo in earlier versions of the artwork for Overwatch. She was featured in the “Reunion” cinematic, where McCree frees her from the Deadlock Gang.”

While we’ve had several glimpses of Echo throughout the years, Dr. Mina Liao is a relatively new figure to Overwatch fans. “There were a few founding members of Overwatch—obviously, there were people like Jack Morrison and Gabriel Reyes,” says Kaplan. “And, as they were founding Overwatch, they invited someone named Doctor Mina Liao, a leading expert in Artificial Intelligence and Robotics who had previously worked for the Omnica Corporation, which had built the Omnics originally, to join them. Morrison wanted to employ somebody who was an absolute expert and understood robotics to make Overwatch more educated and intelligent when it came to the Omnic Crisis.”

Dr. Liao joined the echelons of Overwatch, intent on helping her new comrades understand what omnics were, how they worked, and how to put an end to the Crisis. After the omnics and humans established peace, Dr. Liao fervently continued her research into the unknowns of robotics. What else was there? How could she evolve omnics to the next level? The answer to those questions lay with Echo—her most ambitious project yet, who would, unbeknownst to Liao, be her parting gift to the world.

“She went to Jack Morrison and Gabriel Reyes and basically said, ‘I can make an adaptive learning robot. So, that way, when we send out Overwatch strike teams, if you need a pilot, this robot can fly the ship; if you need medical care it can learn to provide medical care—whatever niche you have on the mission, the robot can adapt and fill that role. And that’s why we think she would be really important to Overwatch.’”

Morrison, though reluctant to move forward with the idea, greenlit the project after Liao gave her word that it wouldn’t get out of hand. “But, Mina took some liberties and really made the robot self-learning… through observation,” says Kaplan. “As she was working on the Echo project, the robot started to adopt her voice. The voice you hear from Echo is really the voice of Doctor Mina Liao talking. The more Echo evolved, the more she really adapted to all of these heroes that she was around all the time—watching them, learning to do what they did, the way they did it.”

Liao’s achievement—an adaptive, versatile artificial intelligence able to modify its behaviors, reconfigure (quite literally) on the fly, and learn from those around it—made Echo both the ultimate mission aide and a potential liability as her sentience developed and she began to question her place in the world. 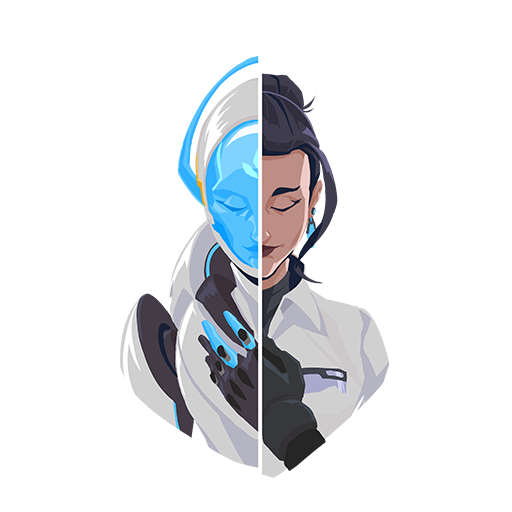 While very few knew of Echo’s true capabilities, Jesse McCree, a Blackwatch agent sent to guard Liao and her research, developed a friendship with the doctor and was often party to her work on Echo. After Liao was killed in an attack on her laboratory, Overwatch, reluctant to continue pursuing the project without its progenitor, shut everything down and placed Echo in quarantine. Years later, an attempt to transport Echo to a secure government facility went awry when the train being used was hijacked by the notorious Deadlock gang; following a chivalric rescue by her old friend McCree, Echo made her way to Paris to aid the newly-reformed Overwatch in their defense against the Null Sector incursion, as seen in "Zero Hour.” Now, she joins the ranks of the newly-formed Overwatch as a full-fledged member.

“Mina Liao lives on through Echo,” Kaplan notes. “Echo absorbed much of who Liao was, and is also constantly adapting to all of the agents around her.”

Freed from the confines of her lab and learning more about the world around her for the first time, Echo continues to adapt while she works with Overwatch as Liao’s living legacy. As she develops more self-awareness and wonders what the future holds for her, her teammates, too, begin to wonder—will she remain a mere echo of Liao, or will she become her own person?

Follow the flight plan with Echo, now available to play on PTR!