Gather ‘round and listen in, it’s time for Tavern Talks, the series that highlights some of the amazing members of our fine tavern!

BabyBear is a competitive player known for her competitive play and her personal style. Here, she talks about competition and developing her own Hearthstone community. So, pull up a chair, it’s time for Tavern Talks! 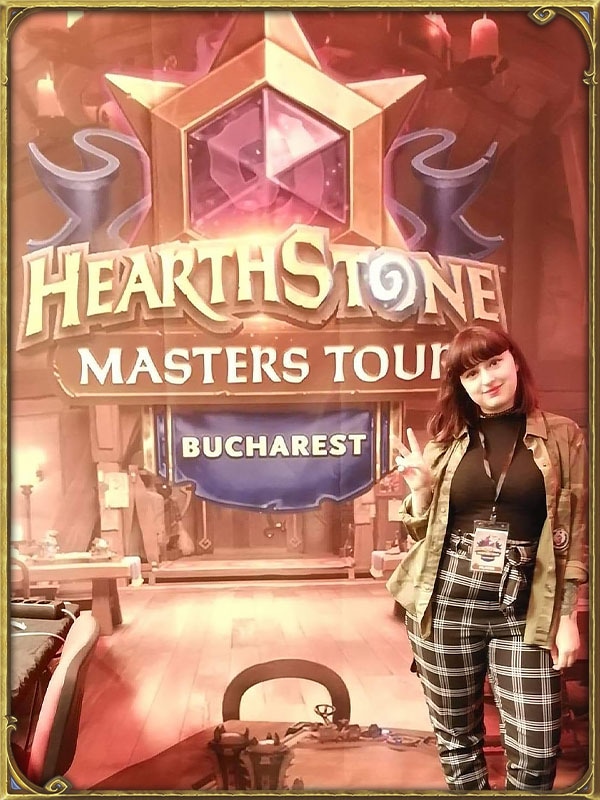 The following interview has been edited for readability.

Q: How did you get into Hearthstone?

A: Hearthstone is the first online game I’ve played. I first learned about it in 2016 when an ex-boyfriend was playing it. At first, I wasn’t interested, but then later that year I decided to try it out myself. When I started playing, I had no collection and didn’t know what to do, but I decided to just build a deck with what I had and I started playing—and winning! When I started winning games, it felt so fun. From that moment I never stopped playing!

Q: Why did you choose the Battletag BabyBear?

A: There wasn’t a deep meaning to it (laughs). Since I hadn’t played other online games, I hadn’t settled on an online persona when I started playing Hearthstone. When I created my account, I was wearing this bear onesie I sometimes wear, and since I’m 5’1”, I looked like a baby bear. I thought, since I looked the part, I might as well go with it. Now I have friends in the scene and everyone knows me as “BabyBear,” which often draws attention in public. It seems even worse when they try to shorten it to “Baby” or just “Bear” (laughs). 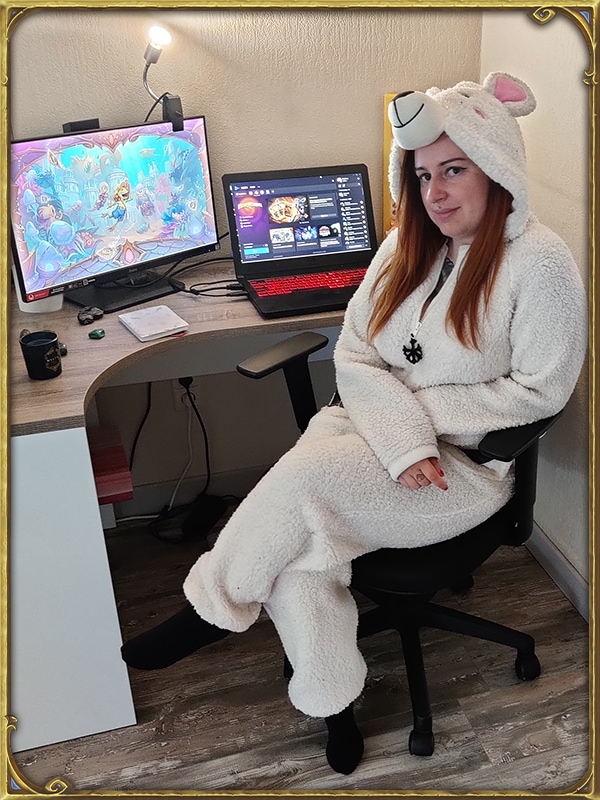 Q: Have you formed a lot of friendships through Hearthstone?

A: Absolutely! I met my best friend, Otsuna, through the game. We went to some LANs together, but we didn’t really speak to each other at those until after we had some Twitter interactions and got to know one another. We’ve talked pretty much every day for four years now. We talk about ladder, unlucky games, life… we’ve practice for events together, too. He lives in France and I live in Belgium, so sometimes we get to visit one another.

I also met my boyfriend, Jambre, through Hearthstone. We already both knew of each other from the scene, but we first met in person at this LAN in Paris which, as you know, is a romantic city, so I think it was a good setting for it (laughs). We were in the same practice group, so we were hanging out a lot and we kept “accidentally sitting together.” At the end of the trip, he asked if I had a boyfriend. I told him that I didn’t, and then the next day he sent me this cute message saying he’d developed a crush on me. We’ve been together ever since! 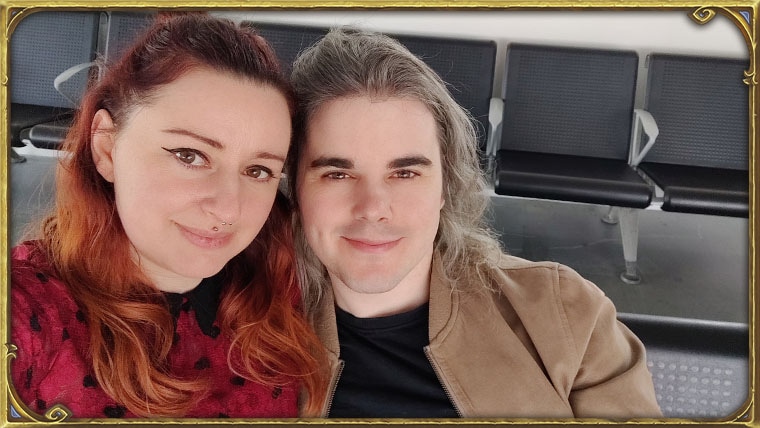 Since he lives in the United Kingdom, we don’t get to spend as much time together in person as we’d like, but we go on e-dates, and we visit each other whenever possible.

Q: Do you and Jambre ever get competitive with each other over Hearthstone?

A: Mostly we just cheer each other on. Jambre likes to try out unusual strategies and make his own decks; I like to encourage his creative process and he likes to share his deck creations with me. We’ll often discuss decklists, matchups, and strategies with one another and try to make each other better, too.

But we’re both competitive players, so there’s also a bit of friendly competition. I think Jambre is the better player overall, since he gets more consistent results: he gets top 50 Legend every month and has qualified to every Masters Tour. But, if you actually look at our Masters Tour winrates, mine is higher than his, so maybe that counts for something, too (laughs)!

In June, we both finished top 50 Legend and qualified for Masters Tour 6, so hopefully we’ll play against each other during the Masters Tour and settle once and for all who’s the better player.

A: We recently played a Hearthstone power couple’s match against another well-known Hearthstone couple, Nayara and Nalguidan, and we were promoted as “JamBear” for that. Even when we first went public as a couple, people in our Twitch chats started calling us that. So I’d say the people decided for us, but we like it, so we’re going for it!

Q: When you first started Hearthstone, were you competitive right away?

A: Yes, right away. Within a week of playing the game I was competing in local events. I didn’t do well in that first LAN tournament, but it was really fun meeting new people, hanging out, and learning new strategies. Then and there I decided that I would keep trying to get better and play against more experienced players. Playing against the best players, and making those connections, was my primary motivation for becoming a better player.

A: Before the pandemic, we had a very active scene with lots of local LAN tournaments and Fireside Gatherings. Now most of that is online-only. But the competitive Hearthstone communities of Belgium and Netherlands work together to set up tournaments through a Discord channel that feeds into an in-person Top 16. I haven’t participated in that recently, but I know they remain very active even through the pandemic.

Q: You also participated in the WESG China tournament in 2019. What was that experience like?

A: That event was amazing! From the moment that I qualified for the finals, everything was so special and well done. The organizers flew me out, put me in a great hotel, and gave me three meals a day for two whole weeks. The most memorable moment, though, was my semi-final match against Justine. She was the more accomplished player at the time, and I felt my lineup was quite unfavorable, but I was able to find some good matchups in the queue order and pull out the win. Afterwards, I remember texting my mom saying, “I just won, I’m gonna be staying in China another week, I can’t believe it!” It was an amazing experience. That was my first big tournament experience and it really made me want to keep participating in those types of events. 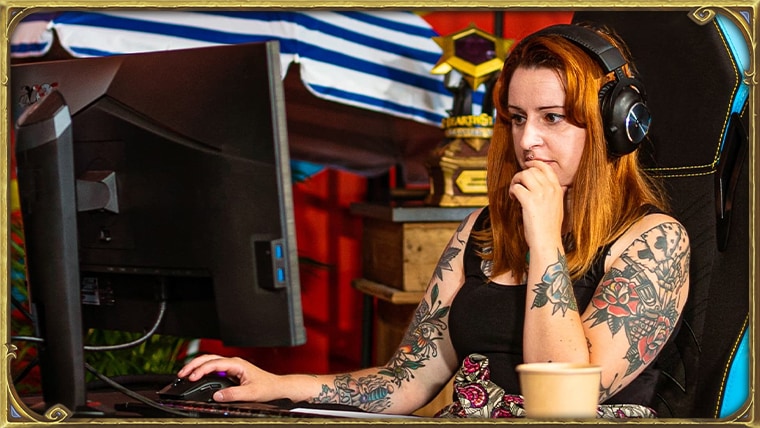 Q: Does your family support your decision to be a pro Hearthstone player?

A: My parents have always been really open-minded, encouraging of what makes me happy, and supportive of my career choices. It was a little odd in this case because at first it was just a hobby and then very quickly I was competing at that high level. I had to miss some family events to prep for it and my mom was like, “this better be worth it!” Then I qualified for WESG and she was like, “okay, I guess it was worth it.” She and my sister also made Twitch accounts so they can come support my streams and tell embarrassing stories about me in chat (laughs).

Q: As an accomplished competitive Hearthstone player, do you have any advice for other female players considering entering the scene?

A: I’d say, if you enjoy the game and want to play competitively, don’t be afraid to just start playing! It can be intimidating to be one of only a few women at a tournament, but you can’t let that get to you too much. In the end, your play is what matters the most. At the same time, as a visible minority, you’ll get a lot of people paying attention to you quickly. I think it’s important to set boundaries and make sure you are comfortable with what is being asked of you from the community, tournament organizers, and other players, and to voice your concerns if those boundaries are being pushed. 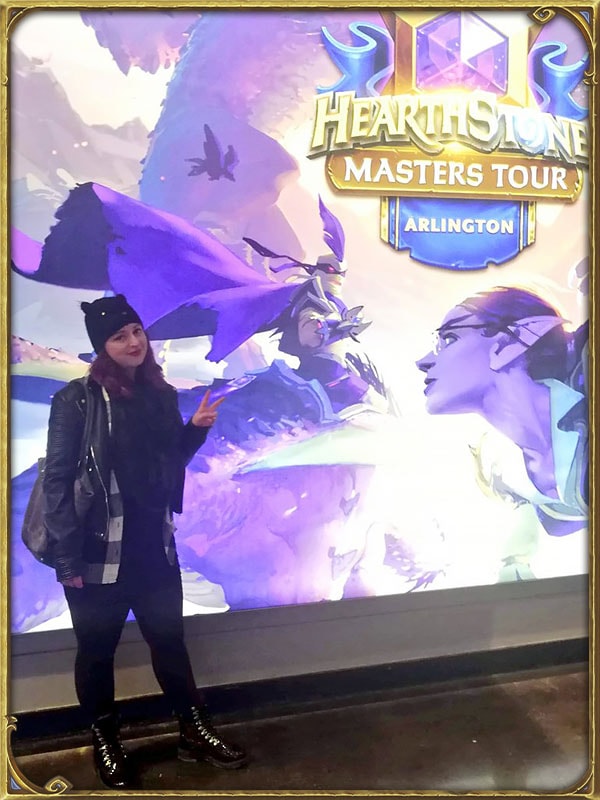 There’s also this great community called the “Badass Women of Hearthstone,” so make sure you follow them on Twitter and join their Discord. That’s a great place to talk to other women in the scene and ask your questions or share you experiences that you might not be comfortable sharing in public. I think that’s a great place to start.

Q: In all the time you’ve played, what’s your favorite Hearthstone expansion and card?

A: My favorite expansion so far has been Whispers of the Old Gods. It released just around when I started playing and I have fond memories from back then. I remember struggling to hit Rank 15 and thinking about how unlucky I always ways. Looking back now, it’s clear I just wasn’t playing all that great (laughs) . But even still, I really liked learning the decks, and thinking of them brings me great memories from when I started.

Nowadays, I play a bit of everything and switch decks a lot on the ladder. But when I first started playing, there was this Tempo Mage that was my favorite deck. I really enjoyed burning my opponents out with my spells. Mage ended up being the first class I got 1000 ranked wins with.

My favorite individual card is Sir Finley, Sea Guide—the Diamond version—because I love the animation of him spinning in the water… his smiling face makes me really happy every time I see it.

Anyone who’s seen me at a LAN or on stream can tell I’m really into tattoos. I have a total of 23 now! For years I’ve wanted a Hearthstone tattoo, but I never went for it. A few weeks ago, I set a Twitch sub goal to get a tattoo and I finally did it! Now I can see Sir Finley’s smiling face every day. 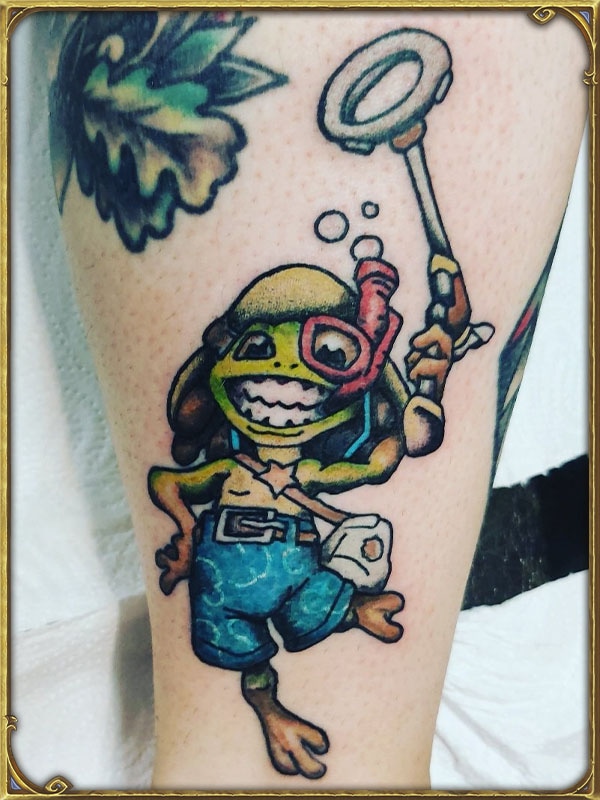 A: Just that I recently got accepted into the Twitch partnership program and I’m really excited to continue streaming Hearthstone and adding to female representation in the scene. So don’t hesitate to come by and say “hi” next time I’m live. I love interacting with viewers and just having a fun time together, playing some games!