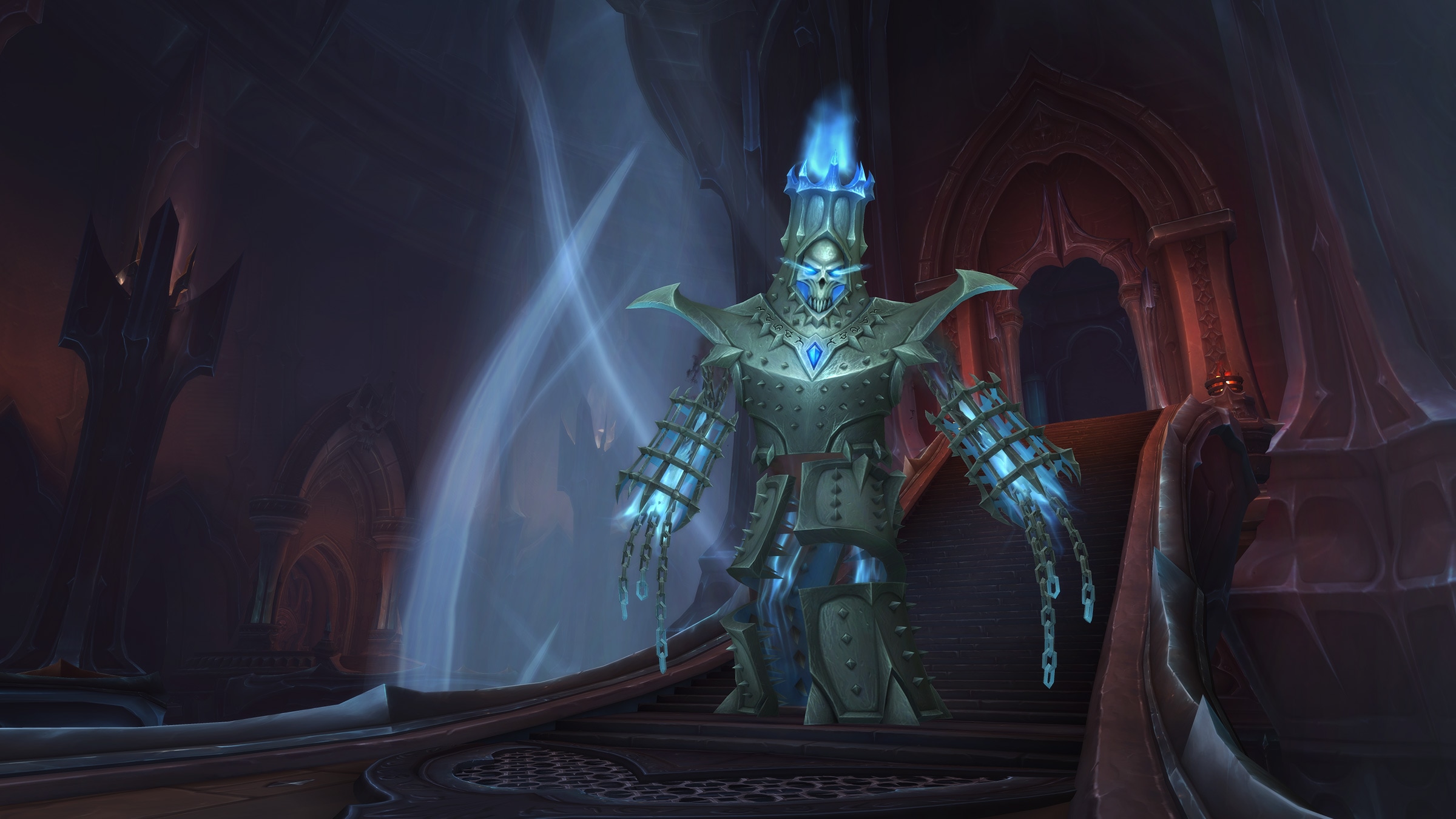 Read about the bosses, rewards, and release schedule in our comprehensive Sanctum of Domination Preview.

Gather your party and discover exotic wares and strange creatures in the new eight-boss Mythic difficulty mega-dungeon; Tazavesh: the Veiled Market. Set in a bazaar of the mysterious brokers, you’ll face off against dastardly assassins, four-armed broker guards, an infinite pirate dragon, and other enemies as you chase down a wayward broker before she can unleash the might of a stolen artifact to realize her own designs.

Read about the bosses, rewards, and how to access this new mega-dungeon in our comprehensive Tazavesh, the Veiled Market Preview.

The new Mythic Keystone dungeon season is now available with opportunities for new rewards and the second seasonal affix for Shadowlands: Tormented. When this affix is active, servants of the Jailer can be found throughout the dungeon and grant powerful boons when defeated. If a servant is not dealt with, they empower the final boss.

With the content update players can take charge of their own progress and see how well they’re performing in Mythic+ dungeons by viewing their personal Mythic+ rating within the Group Finder(I) UI under the Mythic+ Dungeons tab. Your Rating increases each time you run a dungeon you haven’t completed before or when you beat your own best time in a dungeon you have already completed. Completing a keystone provides a rating based on three factors—the level of the keystone, the Affixes in the keystone, and the run’s time compared to the dungeon’s timer. With each Season, Mythic+ ratings are reset in the display.

Learn more about the Mythic+ Dungeon Rating system and check out the Mythic Keystone Dungeon Leaderboards to see who’s staying on top of the clock.

When you complete a Mythic+ dungeon within the timer, the broker Ta’hsup will appear and offer to exchange your current keystone for another instance at random. You can use this service once per run for a keystone that is at or lower than the level of the dungeon completed, if it was not the one used for the current instance.

You can also find Ta’hsup in Oribos by the Great Vault, where he can provide you with a keystone if you don’t have one, or reduce the level of your current keystone if you so desire.

Mythic+ dungeon adventurers returning for Season 2 will notice that the affix rotation has been shuffled and there have been tuning adjustments.

You can read more about the tuning changes in our Content Update Notes.

Dedicated players who attain a Mythic+ Rating of at least 2000 during Shadowlands Season Two will earn the Shadowlands Keystone Master: Season Two achievement and the Soultwisted Deathwalker mount..

Competitive players who complete a dungeon at Mythic Level 20 or higher within the time limit will be able to teleport to the beginning of the cleared instance. The item level of equipment rewarded from Mythic+ dungeons have been increased by 26 as have rewards from the Great Vault.

Participating in PvP activities will reward you with Honor and Conquest currencies to purchase battle-ready, epic-quality gear. PvP gear will now scale to a higher item level when the character wearing them enters PvP combat and activities.

This season, you’ll enter the fray with an assortment of new and adjusted Honor Talents to choose from. You can see which Honor Talents have been added or changed in the Chains of Domination Content Update Notes.

Season 2 comes with a full suite of updated PvP rewards.

You will also find that we’ve increased the starting weekly Conquest cap to 800—giving you more flexibility with your purchases at the start of the season—and will increase it by 550 per week.

Keep an eye on the Player vs. Player Leaderboards during the season to follow who’s making waves at the top 5.

Learn more about the Season 2 updates in our official notes.