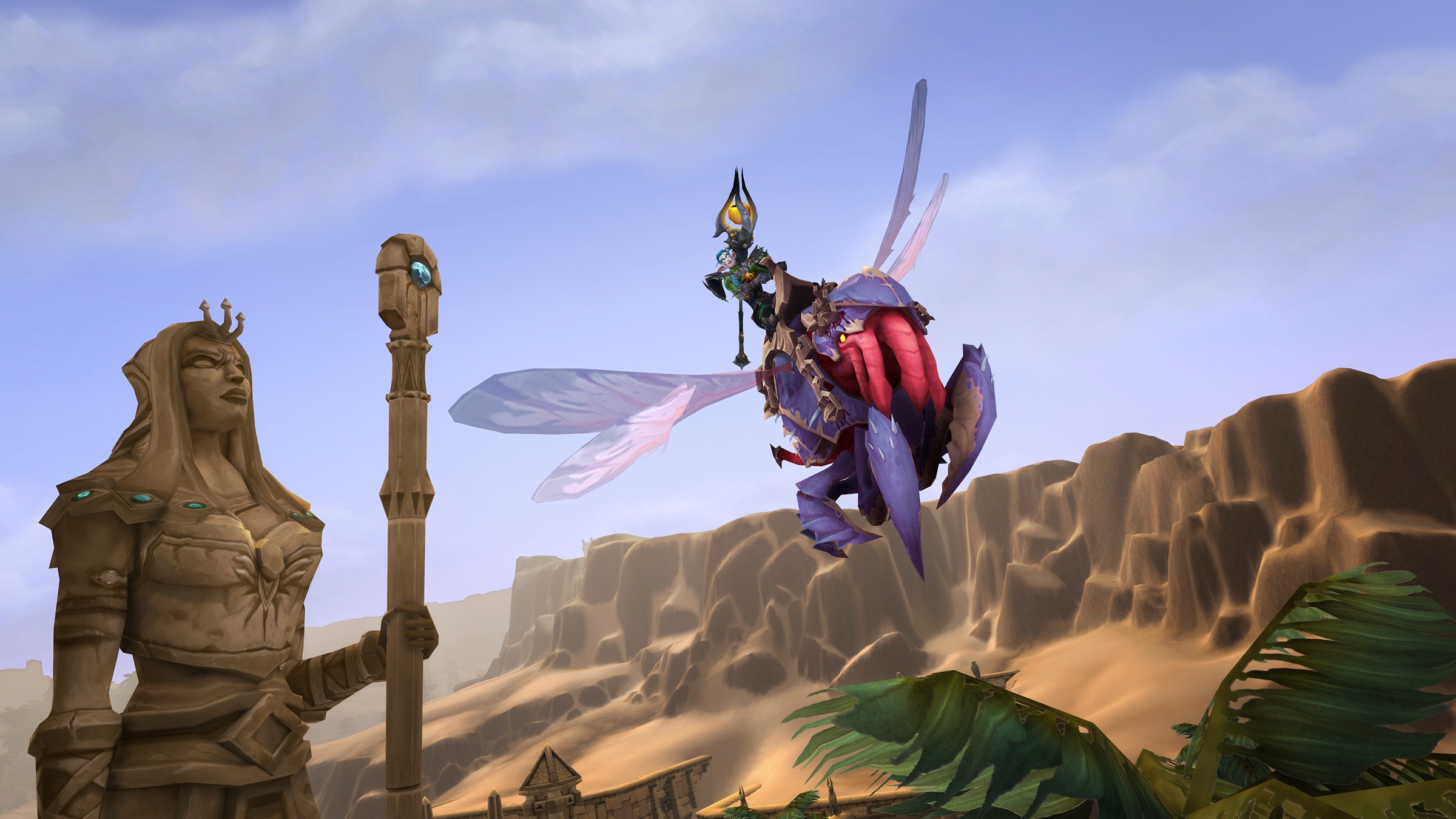 Visions of N’Zoth introduced a variety of new pets, mounts, and items for collectors to hunt down while facing the old god’s twisted visions. We’ve highlighted some of them to point you in the right direction.

A Multitude of Mounts

There are many mounts waiting to be hunted down and added to your stable of available transportation options. Some you’ll come upon with a little luck, while others take time and effort to make your own.

If you’re looking for an opportunity to raise your own mount from hatchling to fully grown beast of burden, then look no further than the Shadowbarb Drone. This flying beastie’s quest begins in Uldum and can only be started while the Aqir Invasion is occurring in the zone. You’ll need to seek out a Voidtouched Egg to begin, then complete a 30-day quest series (one per day) before you can claim it for your own. For a step-by-step walkthrough, check out Wowhead’s guide.

The Friendliest of Alpacas: The Springfur Alpaca (Quest)

“The kind nature of alpacas make them perfect as companions for intrepid adventurers.”

Some hungry, friendly alpacas in Uldum need to be fed some Gersahl Greens over a period of 7 days to complete the quest “Alpaca It In”.

“The Aqir drones feast on heroes and cowards alike to grow their ranks.”

Reins of the Drake of the Four Winds

“Rocks erode, fires sputter, but wind remains powerful regardless of the passage of time. —Phaoris”

Drop: Ishak of the Four Winds

“Larger than most of its kin, this vulture has shown strong and sick beasts alike why they need to fear the skies.”

“The brood of Ha-Li are comfortable in the blue skies of Pandaria hunting unsuspecting prey.”

“Ivory Cloud Serpents are often mistaken for roaring thunder as they tear through the skies with blistering speed.”

To obtain this rare mount, you’ll first need to obtain the Zan-Tien Lasso, which drops from enemies during Mogu invasions. You’ll then need to lasso the fast flying Ivory Cloud Serpent in the skies above the Eternal Vale.

“Houndlord Ren used his strongest quilen to carry him across Pandaria to subjugate the Vale for the Mogu empire.”

“The only thing stronger than a Quilen’s loyalty is its fierce devotion to making sure it covers its owner in kisses.”

“Fierce companions of the followers of Ra-den, the Rajani Warserpents are a force to be reckoned with.”

“The black serpents of N’Zoth are the harbingers of his ultimate vision becoming reality. Only those servants or enemies that can treat this space have any chance of wrangling them.”

“Worming its way through the Postmaster’s network, this serpent of N’Zoth deprived Azeroth of its primary magical correspondence.”

“When the Void reached out, the Aqir were formed in its terrible image.”

Vendor: Wrathion in the Chamber of Heart (100,000 Corrupted Mementos)

“To find him, drown yourself in the Circle of Stars.”

“It’s so wiggly! Just looking at it move is chaotic and unnerving.”

“This spawn of Vexiona, cleansed by Wrathion, comes from a flight with a fractured past and an uncertain future.”

Quest: Lost Flight (This is part of the Ahead of the Curve: N’Zoth the Corruptor achievement.)

“There are few other ways to ride into battle that feature as many spikes and bones.”

“If you try to give it a belly scratch, you’re asking for trouble.”

“They say that proto-drakes can smell fear. This iron-bound monster FEEDS off of it.”

A Leash on Pets

If you don’t mind a little Void in your battle pets or an extra eye (or limb), there are plenty of options to choose from in Visions of N’Zoth.

Gloop  (Magic)
“It is very unclear whether this slime started with all of those eyes inside of it, or if those are 'leftovers.'”
Profession: Fishing – Corrupted Uldum or Corrupted Vale of Eternal Blossoms

“These Aqir Scarabs are masters at tunneling through any terrain.”

“Dragonbreath Chili is nothing compared to the stench coming from the mouth of this thing.”

“Void magic and giant flying insects, a combination nobody ever asked for. Surprisingly effective!”

Quest: “They Grow So Fast”- This quest is a part of the larger Shadowbarb Drone quest line and is a reward during the larva stage.

“Three legs, two arms, three eyeballs, the extras are for emergency situations only.”

“Nobody is sure what sort of powder is coming off of these moths, and everyone is too terrified to find out what it actually is.”

“Even some of the insects have succumbed to the void. They really do adapt and survive through everything.”

In Vale of Eternal Blossoms

“The golden chirper has managed to stay its pristine self, despite corruption attempts from both the Sha and from the forces of N’Zoth.”

“His tentacles give you the best hug your brain has ever felt.”

“Is the void glow in addition to their natural glow, or does it replace it? The world may never know.”

“These look especially magnificent when gliding over the water under a full moon.”

“The shell on these beetles is quite brittle from the void interference, but it also has a strangely fast regeneration rate.”

“This ooze leaves behind a slimy trail as it moves that has a stench that would rival a beast rotting in the dunes of Uldum for a thousand years.”

“It is always C’thuffer. Always.”

“This cat eats anything from random scraps of food to strange glowing cubes of immense power. Be careful in front of its mouth.”

“Only a being of immense power could scar such an adorable creature, unless this hare was already approaching the darkness…”

“This pup is now more than just a bundle of fur and teeth; it is fur, teeth, and void."

“A recent debate has risen up about whether Void-Scarred rats are better or worse than plagued rats.”

“Pulled from a horrific vision of Orgrimmar, these toads are soaked in void energy.”

“The aqir hive has countless numbers of beings in it, all of which are supportive of the ever-present Hivemind.”

“This creepy eye is looking at everyone, always, and only has to blink once every 10,000 years.”

Treasure: Vault of the Black Empire (N’Zoth the Corruptor)

“The thirst for mana is insatiable. Luckily this little one doesn’t consume a whole lot.”

“The winged aqir are very fast and agile, and their wings provide a nice breeze on a warm afternoon.”

“N’Zoth’s corruption spread across many beings, including this little Anubisath.”

Reach Into the Toy Box

Not everything has to be about fighting N’Zoth’s corruption. Sometimes you have to relax and let loose—maybe embrace the Void. That’s as good of a time as any to dip into the toy box to see what you can find.

Use: Throws an Aqir Egg Cluster at the target, swarming them with aqir.

Quest: Coming Out of His Shell
Zone: Uldum

Use: N’Zoth gifts you with All-Seeing Eyes.

Drop: Will of N’Zoth
Zone: Vale of Eternal Blossoms

“An effective disguise only against the most unobservant K’thir.”

Use: Place Coifcurl’s Close Shave Kit on the ground at your feet for you and others to peruse. WARNING: Shave kit may be under dark influence. Satisfaction is not guaranteed!

Use: Sacrifice part of your mortal essence, dealing 60% of your maximum health in Shadow damage to yourself.

In exchange you become Shath’Yar breaking your normal faction allegiance, serving only N’Zoth.

N’lyeth can only be used outdoors in Kul Tiras, Zandalar, and during Visions of N’Zoth while in War Mode.

Use: Allows you to see void threats, wherever they might be crawling.

Use: Place the rotten apple on the ground and of course leave it alone…

Use: Turn yourself into a member of one of the four warring Mogu clans.

Use: A more fitting leash for your void-touched pets or… to keep your other small creatures in line.

Use: Throw the skull to a friendly target to begin the game. Don’t get caught with it when it releases its void energy or you lose!

Use: Place the totem at your feet. WARNING! Keep away from small critters, unless you want them big and angry.

Which mount, pet, or toy is on your list of items to add to your collection? Join the discussion on the forums.