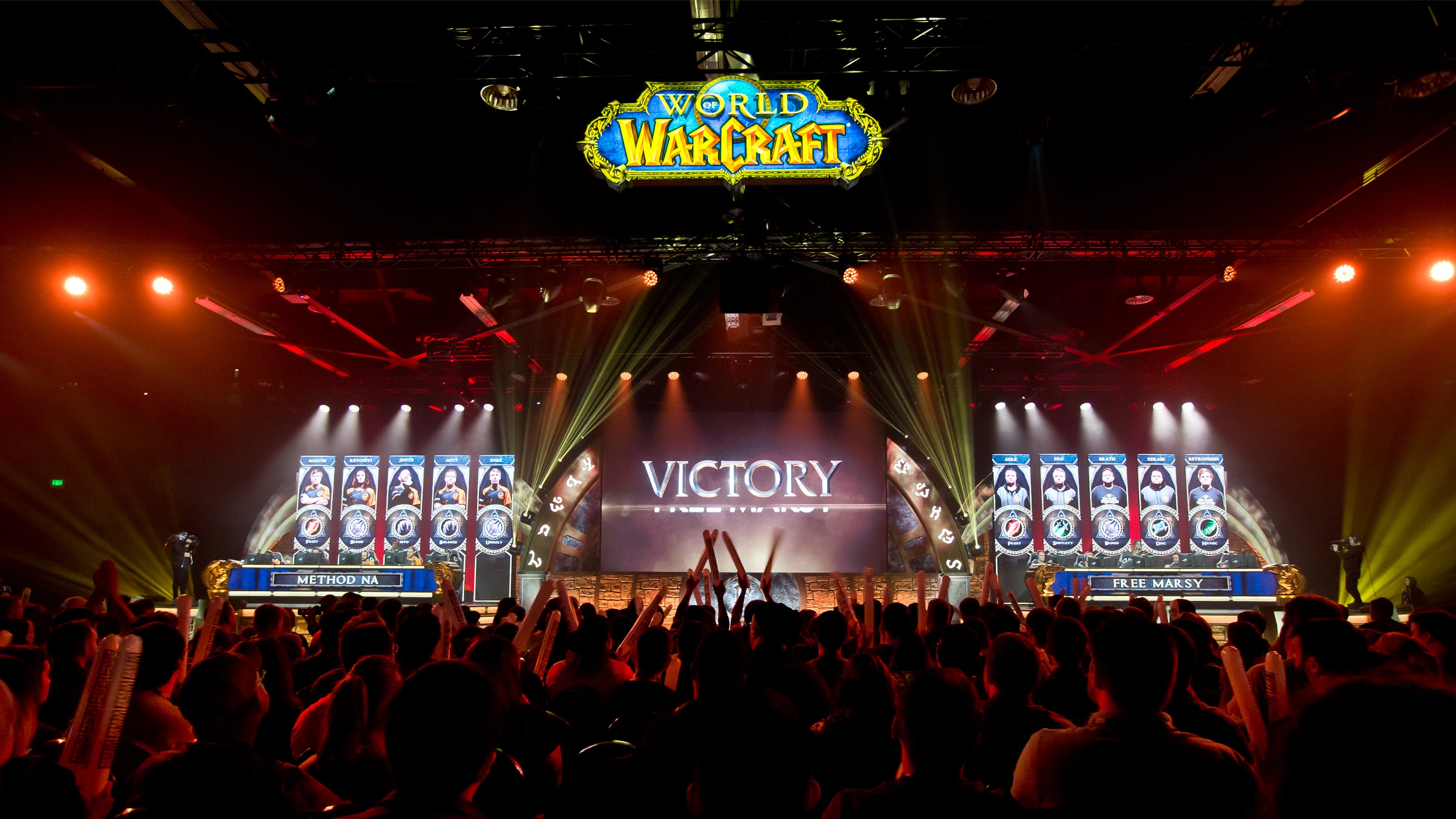 After months of preparation and hard-fought battles, the world’s best WoW teams have risen to the challenge to compete in the Global Finals, but each tournament will crown only one World Champion.

The culmination of the 2019 Arena World Championship and Mythic Dungeon International will take place within the halls of the Anaheim Convention Center at BlizzCon 2019!

Teams competing in the AWC & MDI Global Finals will take part in early rounds on Thursday, October 31. These games will determine who will continue in the upper bracket and who will have to fight their way through the lower. Interested in catching every second of the action? Don’t worry, recordings of the early round games will be released as a Twitch Premiere.

The MDI will kick off the epic WoW esport festivities all day Friday, November 1, beginning immediately after the opening ceremonies, while the AWC will keep the action going all day Saturday, November 2.

Check out the BlizzCon schedule here to learn more!

AWC, The Story So Far

Online tournaments all over the world broke out earlier this year in efforts to find Arena’s fiercest competitors. Every year, these online events are open registration with no requirements allowing any and all to step up and prove their worth. After grueling back to back competitions, the very best has separated and earned their place at the Arena World Championship Global Finals.

In North America, Cloud9 has dominated the point standings. An absolute juggernaut of a team took 1st place at Spring Finals & Summer Finals. While the remainder of the NA teams at both LAN events fell to European rosters like Wildcard Gaming and Aztech. Experts on the desk believe, the European region appears to have the most prepared rosters in the world. Method Black have trained all year for their moment at BlizzCon. At the Summer Finals, Method Black came just short of winning the whole thing, just to be being bested again by Cloud9 in the finals. The experts say Method Black on paper are World Champion material, but can they overcome the dominance of Cloud9?

Meanwhile at the Asia Pacific Finals, the Australian and New Zealand region rose above Taiwan and Korea after the Grand Finals became an all Aussie affair. Unitas White, being made up by the same roster which qualified to the Global Finals last year, faced off against their old teammate Featherfeet in a Best of 7 series, which went the distance. Unitas White clutched out 3 wins in a row, qualifying yet again to BlizzCon.

In Latin America, Unitas White’s sister team Unitas Blue crushed the online cups. The veteran Latam roster is no stranger to LAN events, qualifying two years in a row. Question is, will the Global Finals be a battle of the NA and EU giants, or will the consistency of APAC, LATAM, or even the wildcard team from China step up to the challenge on AWC’s biggest stage?

AWC Where to Watch

Method Black have been dominant in the EU region for the past two years. Method Black were fan favorites going into the Summer Finals but fell short losing to Cloud9 in the Grand Finals after having had beat them in the Upper Finals. Placing third at BlizzCon last year with the same roster, they return to prove themselves as champions. 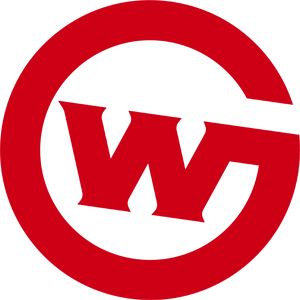 Wildcard Gaming could be the “dark horse” after their strong Summer Finals finish. The core roster of Loony, Blizo, and Zeepeye returns this year, this time around with the legendary mage Maro on the team. All of these players have competed at multiple BlizzCons, with Loony as the only World Champion on the team, winning in 2014. 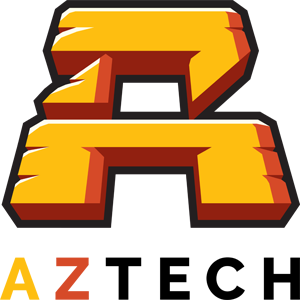 Formerly known as Team Prismatic, Aztech qualified to the Global Finals by a sliver – Wildcard Gaming’s performance at the Summer LAN pushed Aztech to be the top point earner in EU. However, the competition shouldn’t underestimate them. With previous BlizzCon runner-ups Minpojke and Vilaye, they could deliver some surprises. 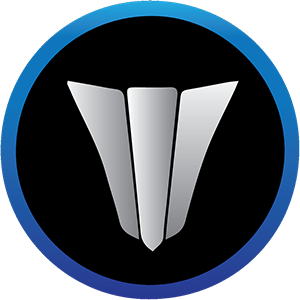 The Gosu Crew (previously known as The Boys) are coming in as NA’s second seed. Every player on this team is world-class at their respective role and has competed at multiple BlizzCons, so they have the potential to go far in the tournament, despite their performances at the Spring and Summer Finals. 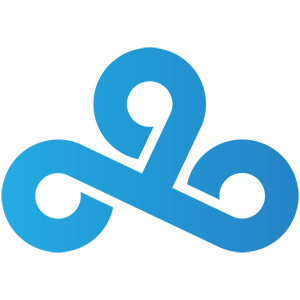 Cloud9 put in a dominating performance in the NA cups and at both the Spring and Summer Finals (taking first place at both events). Kubzy and Wealthyman have competed together since 2014 (except in 2016), making it to BlizzCon multiple times. With BlizzCon Champions Chanimal and Snutz on the roster this year, they are definitely the fan favorites.

Unitas White consists of some of Australia's best Arena players. They are the returning APAC champions from last year, replacing Featherfeet with Cmd. At the APAC Finals, they lost in the first round. They learned from their loss and battled all the way through the lower bracket and qualified for BlizzCon.

Unitas Blue, the powerhouse team in the Latin American scene, has earned their shot at BlizzCon once again. This is the same roster who made it to the Global Finals last year.

New players to the scene, Time to Take Medicine earned their spot at BlizzCon by competing in the CN qualifier cups and winning the CN Finals. While teams from the Chinese region have been treated as underdogs the past few years – however last year the team Pen and Paper surprised the crowd, taking upsets in series and placed 4th. Will Time to Take Medicine be able to do the same?

AWC Behind the Desk 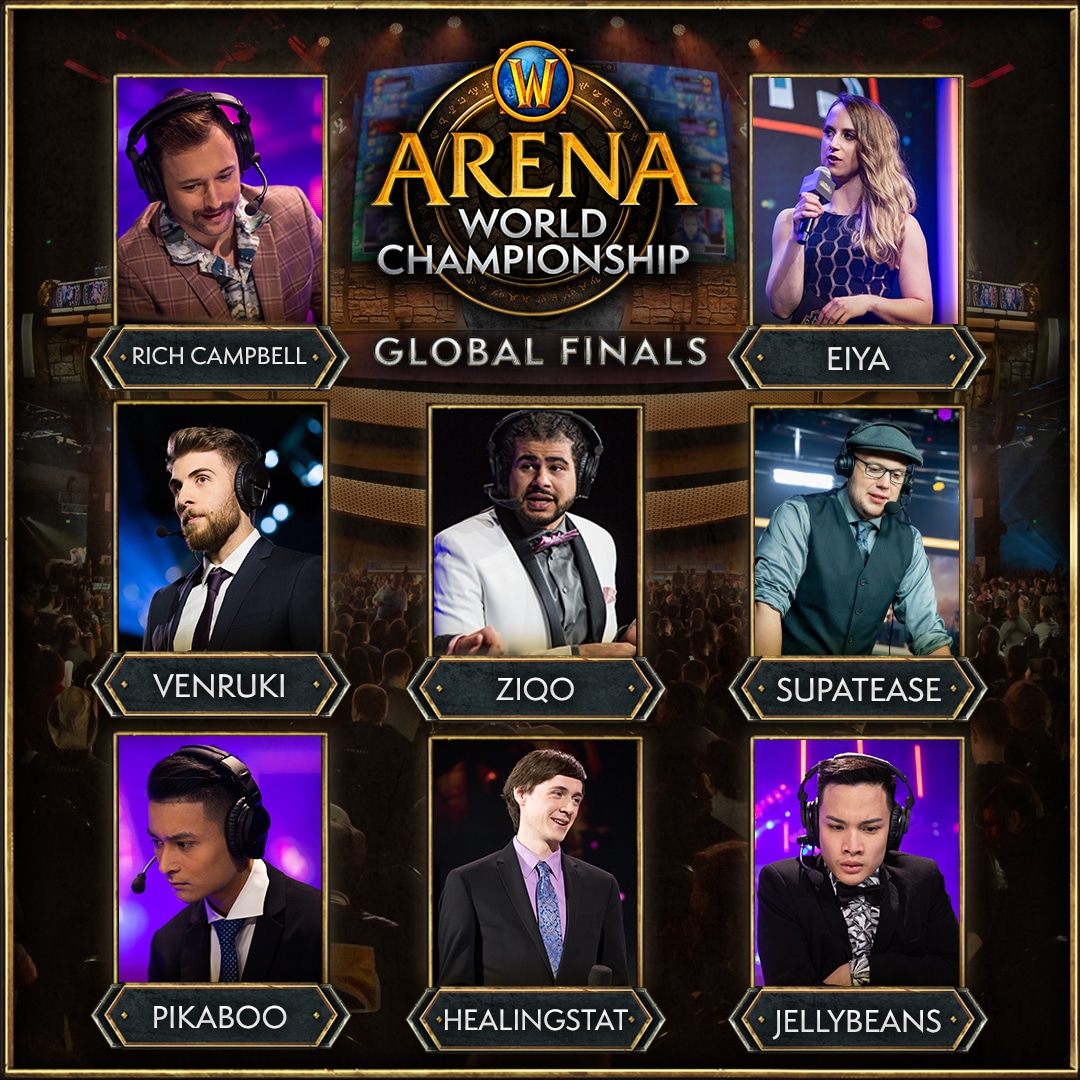 MDI: The Story So Far

With thousands of competing teams taking part in the MDI proving grounds, it’s no surprise how close the competition has been in the West this past year. Method EU has dominated the point standings all year and was expected to continue their dominance at the mid-year Spring Finals LAN. Surprisingly, after knocking their sister team, Method NA, down to the Lower Bracket, Method EU ended up losing to them after Method NA fought their way back to the Grand Finals.

The Method teams aren’t the only teams to look out for in the MDI, Abrakeydabra stepped up their game during the Summer Season and earned enough points to become the second seed from the West.

Due to the West’s regions performance throughout the year, four West teams will be attending BlizzCon – two East teams are still going but are widely considered underdogs.

Regardless of the East’s performance so far, the Taiwanese team Buff Warrior Nerf Rogue seems to be the East region’s best shot. After a close loss to Abrakeydabra during the Spring Finals LAN event, we will be keeping a close eye on Buff War – with a six-team bracket we’re likely to see these two teams face off again at the Global Finals.

As this is the conclusion to the 2019 MDI program, we’ll be bringing back the Reaping Affix from earlier this year. In combination with Beguiling, this should make for some chaotic match ups.

MDI Where to Watch

Jdotb and Lightee played in Method NA last year, adding in the previous Heroes Global Championship competitor YoDa along with Nerf and Shakib. This team won the Spring Finals in a nail-biting final against Method EU, but qualifed for BlizzCon as seed two of MDI West.

During Spring Season, the team qualified as seed one for the Spring Finals but were upset in the finals. This roster also has a former Heroes competitor – Zaelia. Method EU has the highest win rate across both seasons, qualifying as the first seed. 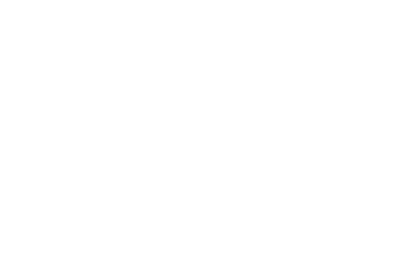 Games Revolted qualified for the Spring Finals, finishing sixth. Unfortunately, Lazel could not secure a visa for the event, so the team brought in the 2018 AWC World Champion, Trill, as their emergency substitute. Trill is the first player to have competed at both the MDI and AWC Global Finals. 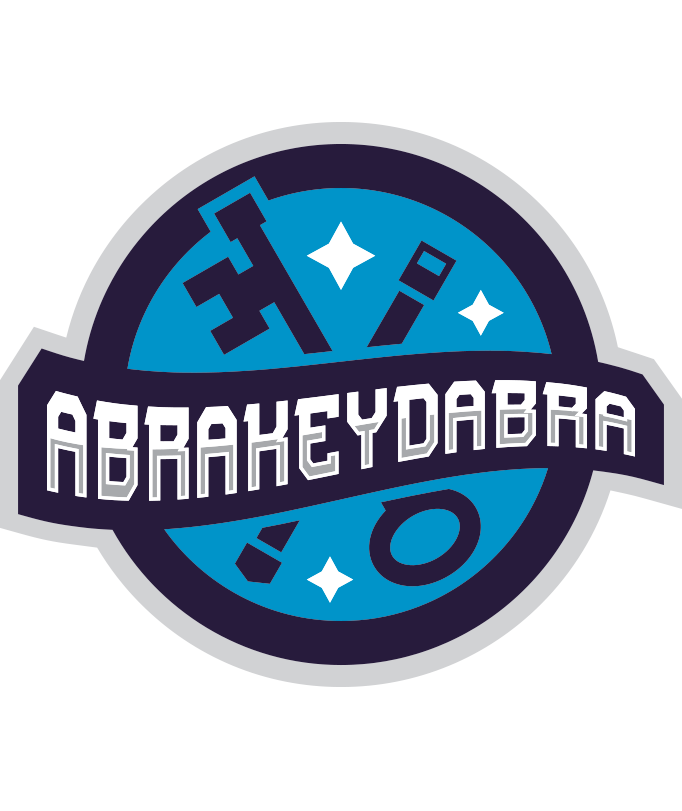 Drjay, Ashine, and Divine competed last year, making it to the 2018 MDI Global Finals, although on different teams. They qualified to the Spring Finals this year and, despite placing third at the event, swapped out their healer for Zmok. The team had a really strong performance in the Summer season after making that change and finishing first in points for the season. 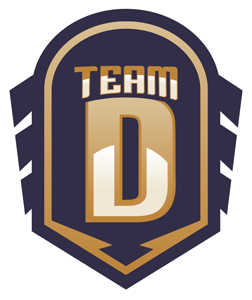 This team from China finished second in the Spring Cups and managed to qualify for the Spring Finals. In the Summer Season they have finished third, accumulating enough points to be the second seed in the East region. 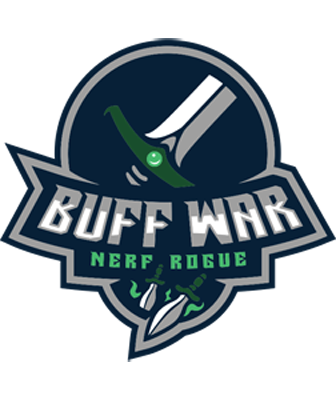 This Taiwan team met in LFG. The team has dominated the Summer Season, qualifying as seed one in the East region.

MDI Behind the Desk 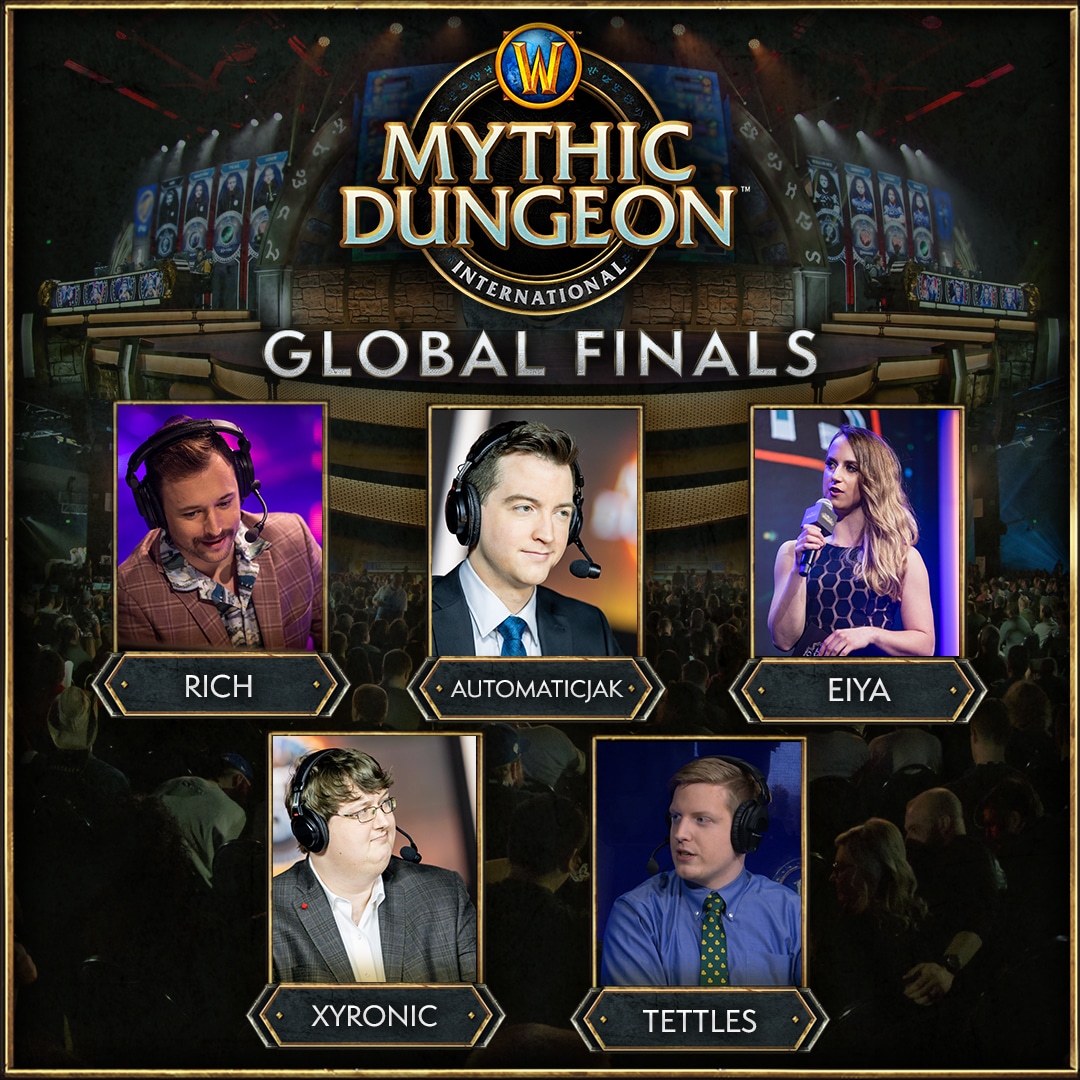