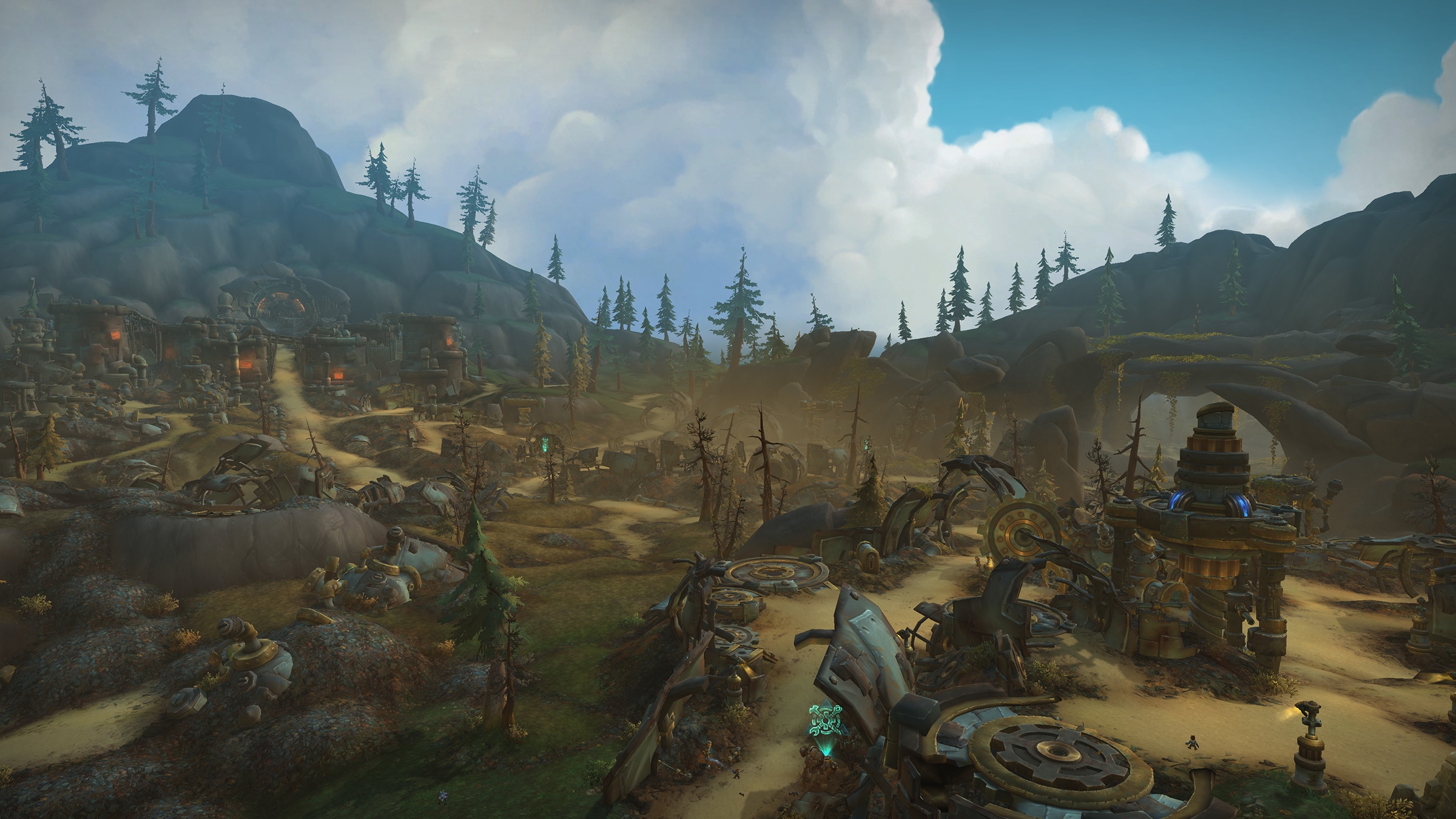 Legends speak of a place off the craggy coast of Kul Tiras whose denizens have replaced blood and bones with bolts and brass: Mechagon Island, home of a society of mechanically augmented gnomes and their iron-fisted ruler King Mechagon. 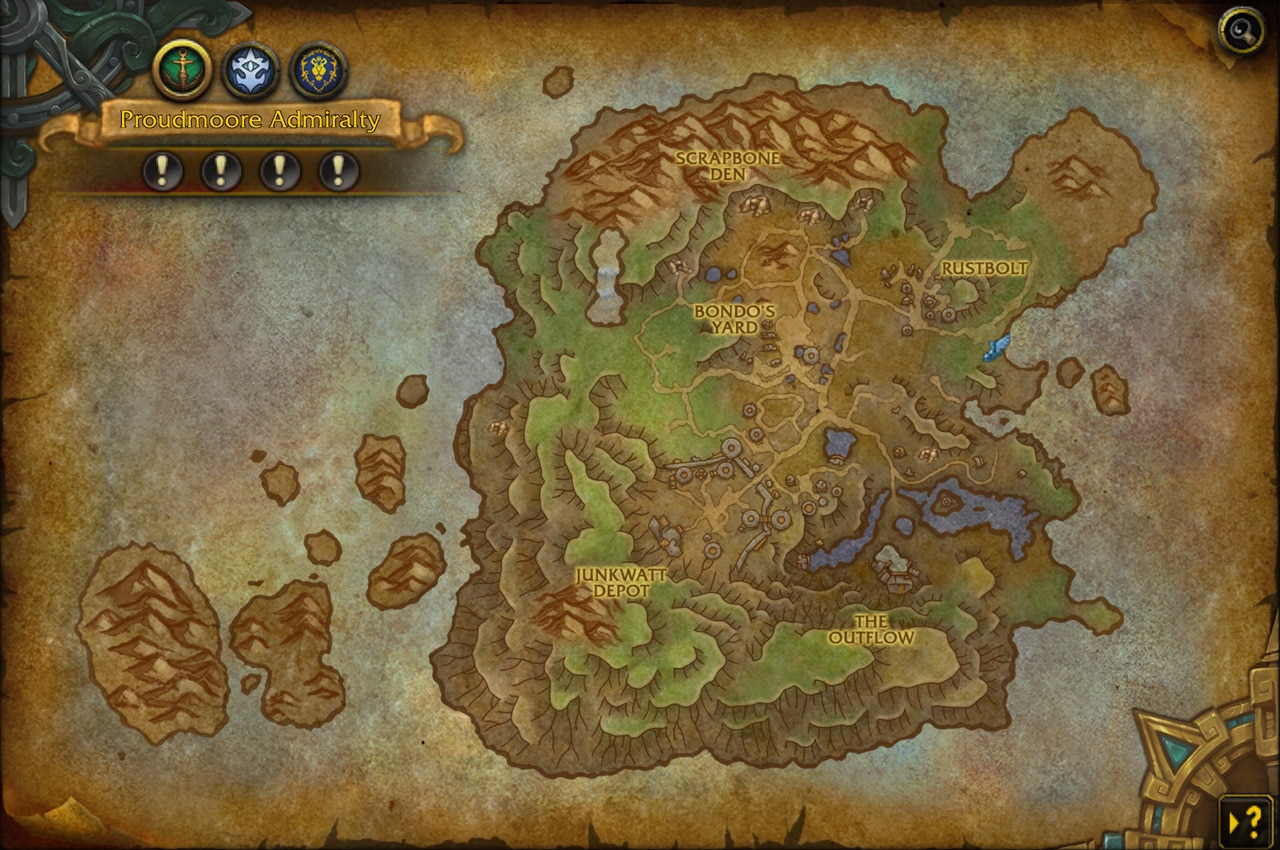 Legends say that long, long ago, King Mechagon, set out on a journey to find a mythical land full of wondrous technological marvels . . . and was never heard from again. Centuries later, an astounding discovery sparks an expedition to find out what happened to the king and his subjects on the remote Mechagon Island.

Your adventure to Mechagon begins after establishing your hub in Nazjatar and powering up your Heart of Azeroth. Soon after, you will receive a summons from one of the most renowned tinkerers of Azeroth—Gazlowe for the Horde, and Tinkmaster Overspark for the Alliance—directing you to a newly opened vault in Tiragarde Sound. Inside, you will find technology that has never been seen on Azeroth, and the location of the fabled island.

Upon arriving in Mechagon, you’ll meet the scrappy and resourceful mechagnomes, whose fleshy forms have been improved with cybernetic enhancements. But as you’ll soon find out, this is not the technological paradise you may have been expecting. The mechagnomes on the island’s surface are fighting against a foe with twisted designs for Azeroth: the legendary King Mechagon himself, who rules the subterranean metropolis of Mechagon City with an iron fist. Within the wondrous city’s walls and workshops, the mad king has spent the past centuries consumed with an obsession to “cure” Azeroth of the Curse of Flesh—stripping away organic life and replacing it with purer, more efficient mechanical forms.

Welcome to the Rustbolt Resistance

At the forefront of the battle against the twisted tyrant is his son, Prince Erazmin, leader of the Rustbolt Resistance. As you learn more about what’s happening on the island, you’ll be recruited to join the fight to overthrow his tyrannical father and put an end to his mad designs. But you’ll need more than resolve to stand against King Mechagon’s might; if you have any hope of succeeding, you’ll need to bolster the resistance forces by taking part in the myriad events and activities you’ll discover around the island, including collecting scrap to build tools and weapons, assisting the island’s daily visitors with their personal quests, constructing a trinket to give you an edge in combat, and more.

One of the many mechanical marvels you’ll encounter on the island is Pascal-K1N6, a giant iron robot who will help players craft an arsenal full of equipment, mounts, toys, consumables, and more in exchange for Spare Parts and Energy Cells found across Mechagon.

As you explore the island, you’ll discover blueprints that Pascal-K1N6 can use to craft these items. One particularly curious blueprint for can be found at the scrap heap known as Bondo’s Yard—pick up the plans for a Mechanocat Laser Pointer, and you’ll soon be able to call in a X-995 Mechanocat to ride around the island. As you continue sifting through the island’s scrap, be sure to keep an eye out for paint you can use to customize your new robo-kitty’s color. 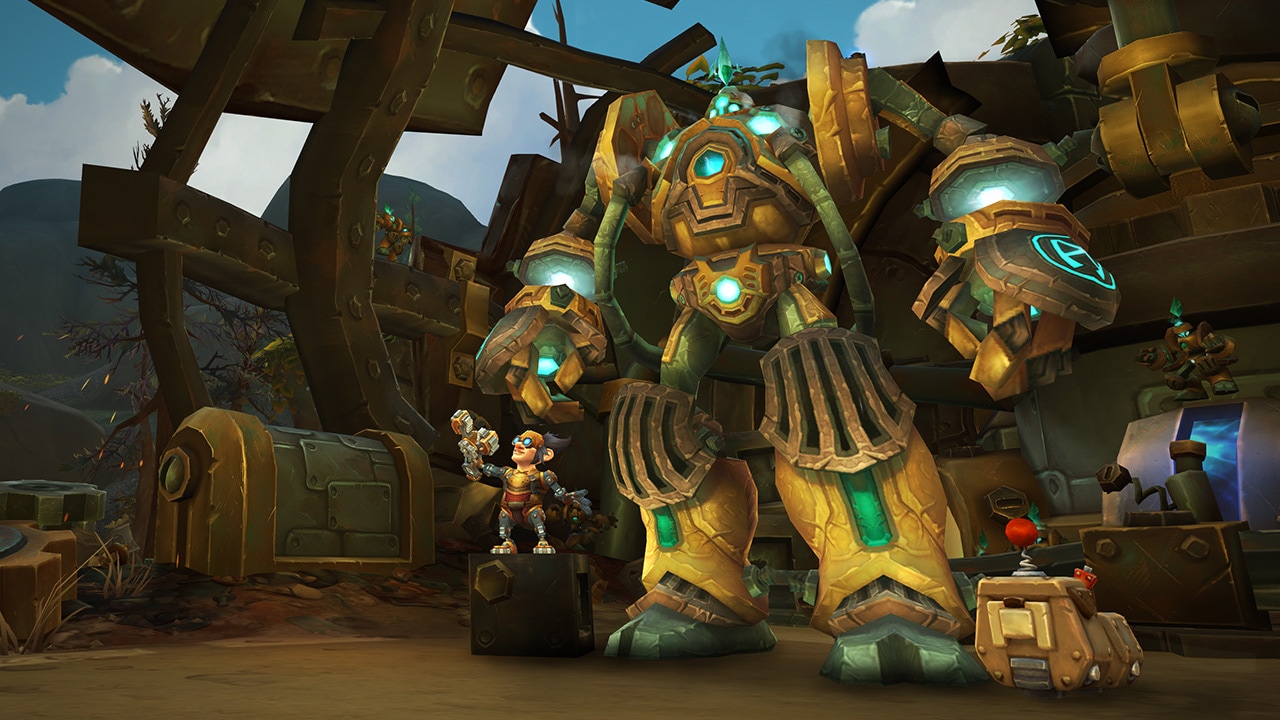 As you explore Mechagon, you’ll be able to contribute resources to Construction Projects that create a variety of powerful constructs. These projects provide a variety of bonuses to give you and your fellow adventurers an edge on the island, including experimental equipment weapons and equipement to wield while on the island, flame turrets that help clear an area of foes, a drill rig that can uncover a cave full of treasures (and maybe uncover something best left uncovered), and more.

Did You Know?: Angling for Parts

The parts you need for Construction Projects can be salvaged from a variety of sources around the island—including through fishing in Mechagon’s rust-tainted waters . You'll often be able to gain Spare Parts and even sometimes fish up Energy Cells along the way. Just keep an eye out for malfunctioning creations among other less than welcoming denizens of the island.

One of the most fascinating pieces of technology waiting to be discovered in Mechagon is the Pocket-Sized Computation Device, a trinket that players can customize to suit their adventuring needs. The device houses three Punchcard Sockets, into which players can insert one Red, Yellow, and Blue Punch Card. Punch Cards provide a variety of different bonuses, and can be collected by questing, exploring the Mechagon zone, and advancing through the new Mythic-only dungeon Operation: Mechagon. Players will receive their Pocket-Sized Computation Device after completing the Upgraded quest, available shortly after landing in Mechagon.

Once you’re feeling properly upgraded, it’s time to begin your bid to shut down King Mechagon once and for all and free the mechagnomes from his tyranny. Get ready for Operation Mechagon! 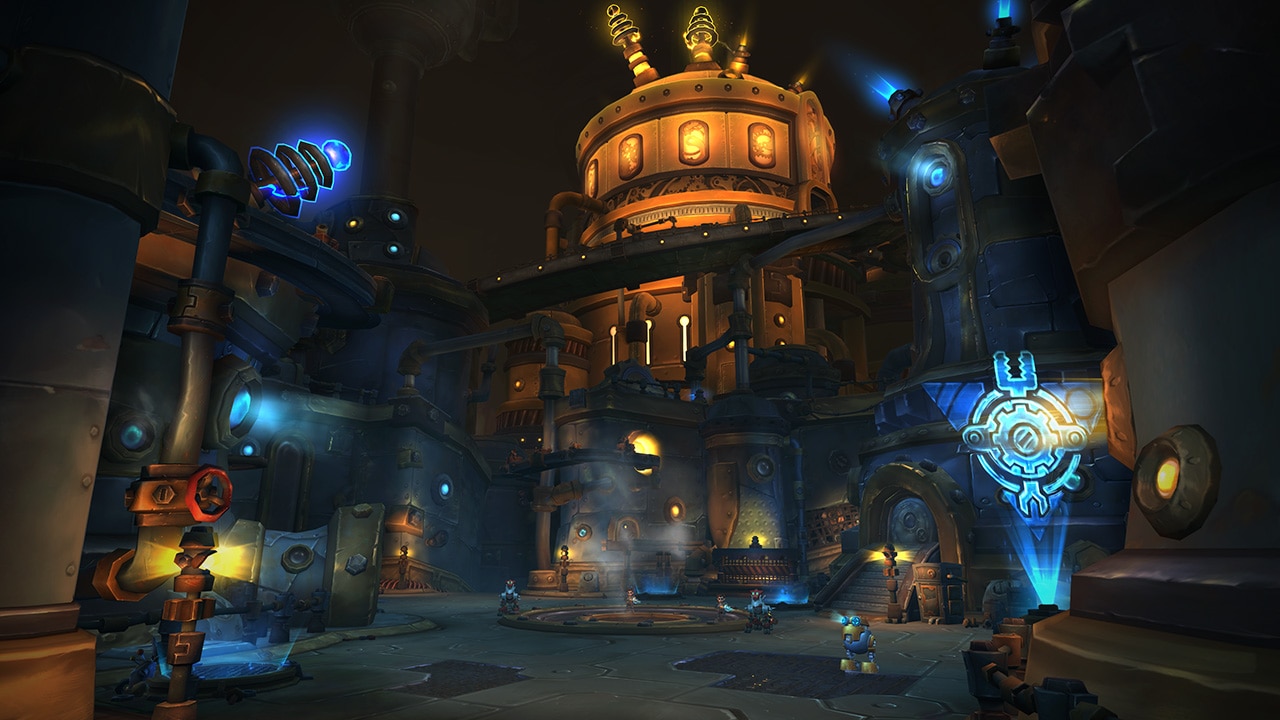 Prince Erazmin leads a group of unlikely allies on a desperate mission into the heart of Mechagon. In a race against time, they must overcome King Mechagon’s army of mechanized monstrosities and defeat the mad genius before his doomsday device purges all organic life from Azeroth.

King Gobbamak: Obsessed with hoarding dangerous technology found amongst the scrap, King Gobbamak sits upon a pile of doomsday weapons that he lacks the intelligence to operate or understand.

Gunker: After years of coalescing into a concentrated cesspool. Mechagon's toxic waste has gained malevolent sentience. With the sanitation systems disabled, Gunker is free to ooze across all of Azeroth.

Trixie & Naeno: Trixie and Naeno, two of Bondo’s top lieutenants, have a turbulent relationship. While Trixie prides herself on ruthless efficiency, Naeno is the embodiment of chaos while behind the wheel. The only thing they have in common is their penchant for senseless violence, which they enjoy dispensing on anyone foolish enough to wander into their territory.

Tussle Tonks: Mechagon’s premier mechgineers test their mettle (and metal) by building customized combat robots. While these tonks typically battle each other for glory, they combine their efforts to repel foolhardy organic intruders who dare venture into Mechagon.

K.U.-J.O.: As the repository for the city’s refuse, the Under Junk is a prime target for gnomes from Bondo’s gang who intend to steal valuable mechanical components. While Trash Mistress Wendy Cogsworth ceaselessly sorts the city’s junk, her loyal guard dog, K.U.-J.0., keeps out unwelcome intruders—mechagnomes and adventurers alike.

Machinist's Garden: Beautiful and dangerous, Head Machinist Sparkflux's metallic gardens are designed for both recreation and retribution. With a flick of a switch, the idyllic scenery transforms into a death trap from which no interloper can escape.

King Mechagon: As maniacal as he is brilliant, King Mechagon despises all organic life. With his mechoriginator primed and ready, nothing stands in the way of his scheme to purge the curse of flesh from Azeroth and mechanize the entire world.

Get ready to face the danger within beginning July 9.

There’s plenty to discover as you make your way through Mechagon Island. Get ready to rally the resistance, turn one gnome’s junk into another gnome’s treasure, and put an end to the mad king’s mechanations once and for all when Rise of Azshara arrives on June 25!