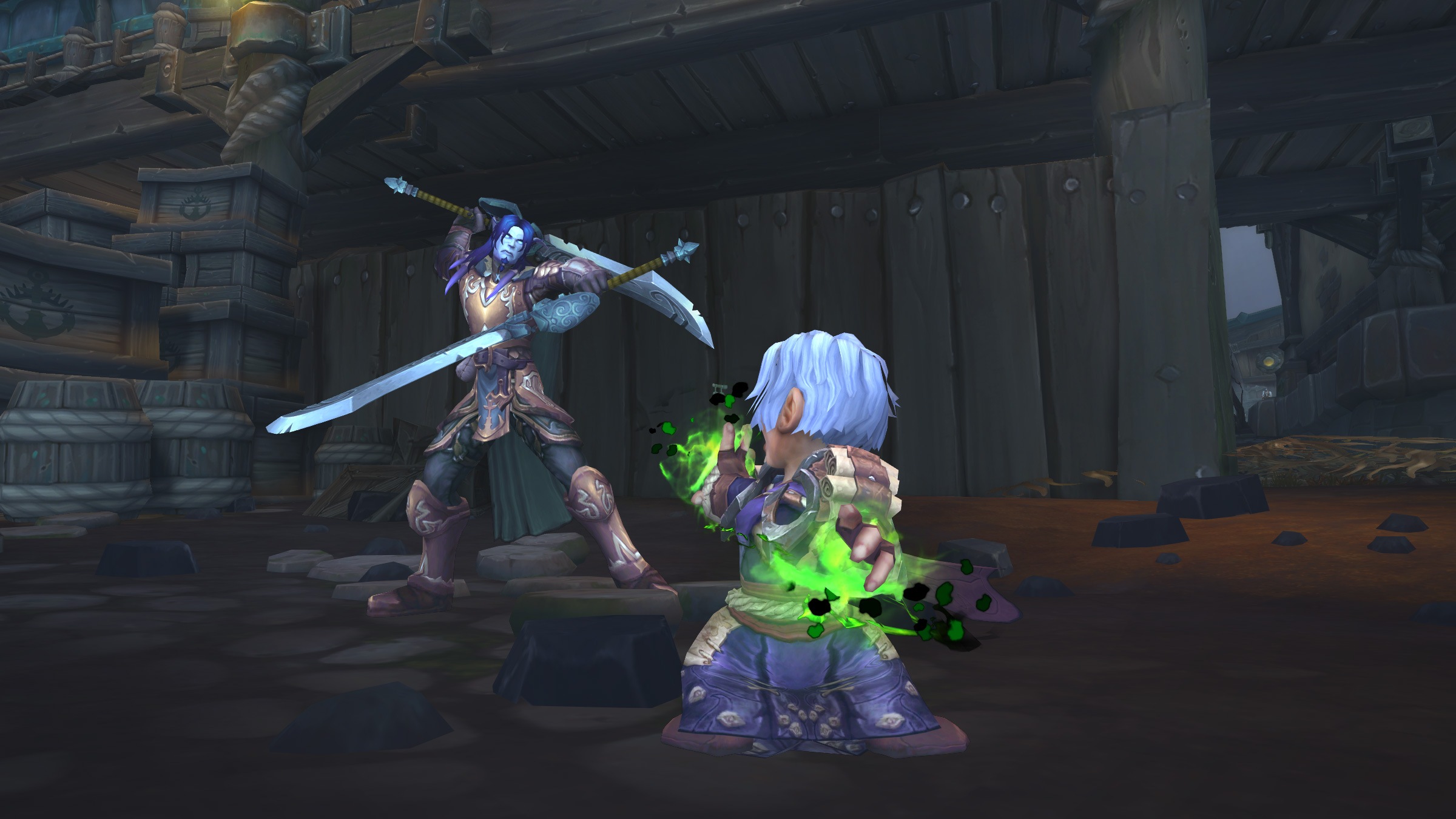 For many PvPers, there’s something special about going toe-to-toe against a formidable foe—especially when that foe is another player behind their own keyboard. For some, it’s the rush of adrenaline that makes their hands tremble as they set them to keyboard and mouse. For others, it’s the icy cool feeling of calm that courses through their veins before the action kicks off. You’ll often see these players gathered outside the gates of Stormwind or Orgrimmar, flags firmly planted as they /duel simply for the joy of it.

With the introduction of the Dueler’s Guild in Battle for Azeroth, we’re kicking the experience of the simple duel up a notch. Get ready to put your skills to the test against fellow duelists from your own faction, earning a few achievements, a title, a tabard, and (of course) bragging rights along the way.

Players at level 120 who have War Mode enabled will be able to queue for a Dueler’s Guild battle at the Bouncers (Alliance) or Troll Guards (Horde) in the War Headquarters for their faction, located in Boralus and Zuldazar respectively. Each headquarters is indicated on the map (M) with the Alliance symbol or the Horde symbol. (This is also where you’ll collect your War Chest for your efforts in certain PvP activities during the week.) Once you’ve queued, a buff will be placed on you showing your place in the queue.

Who:
Level 120 Players who have War Mode enabled
Where:
Alliance – Hook Point in Boralus
Horde – The Mugambala in Zuldazar

Once in the queue, you can move around the area around the War Headquarters a little—just don’t go too far, or you could lose your spot in the queue. But that doesn’t stop you from observing the duelists in action. Speak to Hexpriest Junda in The Mugambala if you’re Horde or to Sea Seer Crystal if you’re Alliance to spectate and keep an eye on all the carnage while you wait.

Once it’s your turn to battle, you’ll need to beat three opponents consecutively to earn the achievement Prize Fighter. Completing this achievement along with Dueling Master and Thirty Six and Two will award the achievement Master of Duels and the title of Contender.

You’ll be able to buff (and get buffs) to prepare for your matches before you begin your duel, but it’s important to note that cooldowns will not refresh with each opponent you face. When you win a match, you’ll only have a short period of time before you face your next opponent. After you’ve defeated three opponents, you’ll be removed from the dueling arena for the next contenders to take center stage.

This is just the beginning of what we have in mind, but we hope that it’s the start of something dueltastic* that you’ll want to dig your teeth into. The Dueler’s Guild provides friendly players an opportunity to hone their PvP skills and then head out into the world to take on a common foe . . . the other faction. We’ll see you in the dueling ring!

*We just made this word up, but we’re sure it’s bound to catch on.