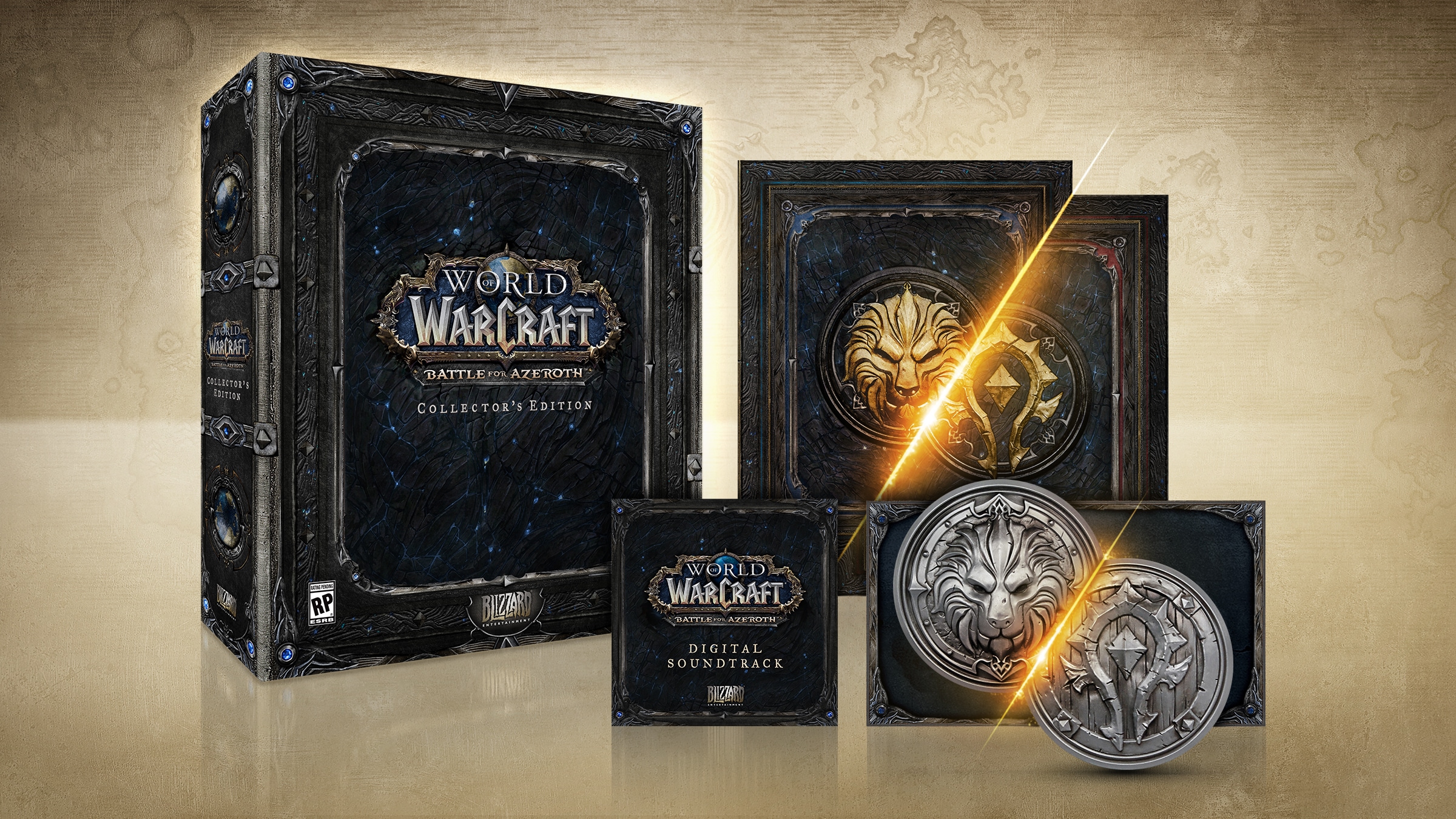 While Azeroth bleeds, the armies of the Horde and Alliance meet again on the fields of battle. Prepare for all-out war with this limited edition collector’s set, featuring rare and commemorative items to boost morale for the coming conflict.

Every great war story has two sides. This limited edition hardback version collects two new World of Warcraft novellas depicting the Burning of Teldrassil from the point of view of the Alliance (Elegy, by Christie Golden) and the Horde (A Good War, by Robert Brooks). Each story includes original artwork exclusive to this edition*.

Declare your allegiance with this hefty, double-sided Mark of Allegiance. Place it somewhere prominent, with your chosen faction proudly facing out into the world for all to see. Includes stand.

A digital key to download the stirring orchestral pieces from the Battle for Azeroth soundtrack, the perfect mood music for laying siege to your enemies.

Digital key to unlock the full version of Battle for Azeroth.

Unlock a treasure trove of Horde- and Alliance-themed in-game content within World of Warcraft and across other Blizzard games:

Heroes of the Storm©

The Battle for Azeroth Collector’s Edition costs $99.99 and is available to pre-order now. Check with your local retailer for details.

Update: The metal Mark of Allegiance, with quarter and banana for scale - it weighs a little under 1lb

Upgrading from Standard or Digital Deluxe to Collector’s Edition

Please note, if you bought a standard edition then upgraded to a digital deluxe, you will be credited for the original copy only.

If you bought the Standard OR Digital Deluxe copy of Battle for Azeroth and pre-ordered the Collector’s Edition, your Blizzard Balance credit will be the price you paid for the original copy.

If you bought the Standard digital copy, upgraded to Digital Deluxe at a later date, then pre-ordered the Collector’s Edition of Battle for Azeroth, your Blizzard Balance credit will be the price you paid for the original Standard Edition.

*Both stories will become available online later this year, but buying the Collector’s Edition will remain the only way to own the exclusive hardback version containing original artwork.