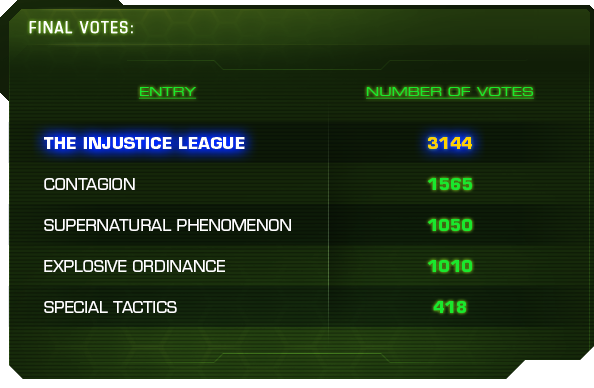 Congratulations to ‘Saito’ and to his Mutation “The Injustice League.” You can read all about how this mutation functions here. Our development team wanted to share some words about the winner and the contest in general.

The Co-op team was really blown away by the response to this contest. It was extremely difficult to reduce our list of literally hundreds of submissions into just five, but we feel that any of the finalists would make a great addition to the Mutation system.

We’re extremely pleased to see you all loved Saito’s “The Injustice League” as much as we did. It had exactly what we were looking for in a new Mutator combo: an epic and instantly understandable concept, complimentary Mutators, and a great name! The three new Mutators, “Heroes of the Storm,” “Inspiration,” and “Hardened Will,”synergize extremely well but also have the potential to work alone or when combed with existing mutations. We also love that the combo and individual Mutators can work on most of our maps, which will allow us the option to include them in the Custom Mutator system and remix them into future combos.

In addition to the other finalists  Elsanna’s “Contagion,” Antermosiph’s “Explosive Ordinance,” Kevin’s “Special Tactics,” and CrystalDazz’s “Supernatural Phenomenon,” we’d like to give a special shoutout to RanDian’s “Pizza Catastrophe” and gloomyhat’s “A Party To Die For,” which were both fantastically creative and hilarious.

Thanks to everyone who submitted ideas and voted and congratulations to Saito, the winner of our first Mutation Creation Contest!

And there you have it! Thank you again for your participation and we’ll see you on the battlefield.