As another great year of StarCraft II esports winds down, we’re excited to share details on our plans for the 2016 World Championship Series.

When looking at changes for the upcoming year, we wanted to focus on truly enhancing the parts of the system that worked well in 2015.

In the WCS Premier League, one of the most memorable points this year came in Krakow, Poland, as an energetic home crowd cheered on one of their hometown heroes in the finals. It was a great example of the connection the community has with their local players and the excitement that this type of connection can bring. In 2016, we’re looking to create more of these moments than ever by placing a higher emphasis on thrilling weekend events. And to help us, we’ve partnered with two top-notch esports organizations, ESL and DreamHack. With the extensive experience these organizations have in running world-class live events, we’re excited to see what this year brings.

Looking at Korea in 2015, we were amazed by the level of talent on display in the Global StarCraft II League (GSL) and StarCraft II StarLeague (SSL). The players winning these tournaments truly earned the distinction of being the best of the best. In 2016, we’d like to more formally recognize these leagues for what they are—the highest level of StarCraft II competition in the world. With the help of our partners AfreecaTV and SPOTV, we’ve made changes to reflect the prominence of the GSL and SSL. For example, we’ll be helping to elevate the storylines in the two leagues through the crowning of a single champion. Any player looking to play among the very best is encouraged to compete in these tournaments.

With a new expansion, we felt that this was a perfect time to make significant improvements to the WCS system. In collaboration with our partners and key members of the esports community, we’ve come up with some adjustments that we hope will further enhance the WCS experience for players and spectators, and will continue fostering a vibrant StarCraft II esports ecosystem in 2016 and beyond.

Before we dive into the specifics of the 2016 WCS format, we’d like to highlight some of the key changes we’re making to the WCS system.

Bigger total prize pool
This year, the Blizzard-sponsored prize pool is being increased from $1.6 million in 2015 to over $2 million in 2016—with the prize pool for the WCS Global Finals now totaling $500,000.

Two tournament standings
The WCS point system will now be split into two standings. The WCS Korea Standings, representing the highest level of competition, will include players participating in the GSL and SSL tournaments in Korea. They’ll be open to any player willing to take up the challenge of league play.

The WCS Circuit Standings, an evolution of the previous year’s WCS Premier League, will provide a proving ground for stars in other regions through a variety of tournaments around the world. These tournaments will be residency-locked to help focus on providing more opportunities to expose, develop, and celebrate the top talent from regions outside of Korea.

Additional tournament support
While the WCS Premier League created consistent action throughout the year, the studio broadcasts could not match the energy and excitement of live tournaments. Rather than continue to produce these broadcasts, the new system will focus on further elevating existing live events through direct support and through offering a more open calendar for them to occur.

Multiple tournaments will receive more support throughout the year. Select WCS Circuit events, Regional Challengers, and the WCS Circuit Championships will all receive bonus prize pool support directly from Blizzard. Eligible players who qualify through designated WCS Circuit qualifiers will also receive support to travel to and compete in these events.

GSL & SSL Cross-Finals
With a more evenly distributed prize pool in the GSL and SSL, we wanted to further incentivize players to strive to become the best of the best. Players who win the GSL and SSL tournaments each season will face off to determine the top player in the WCS Korea system. 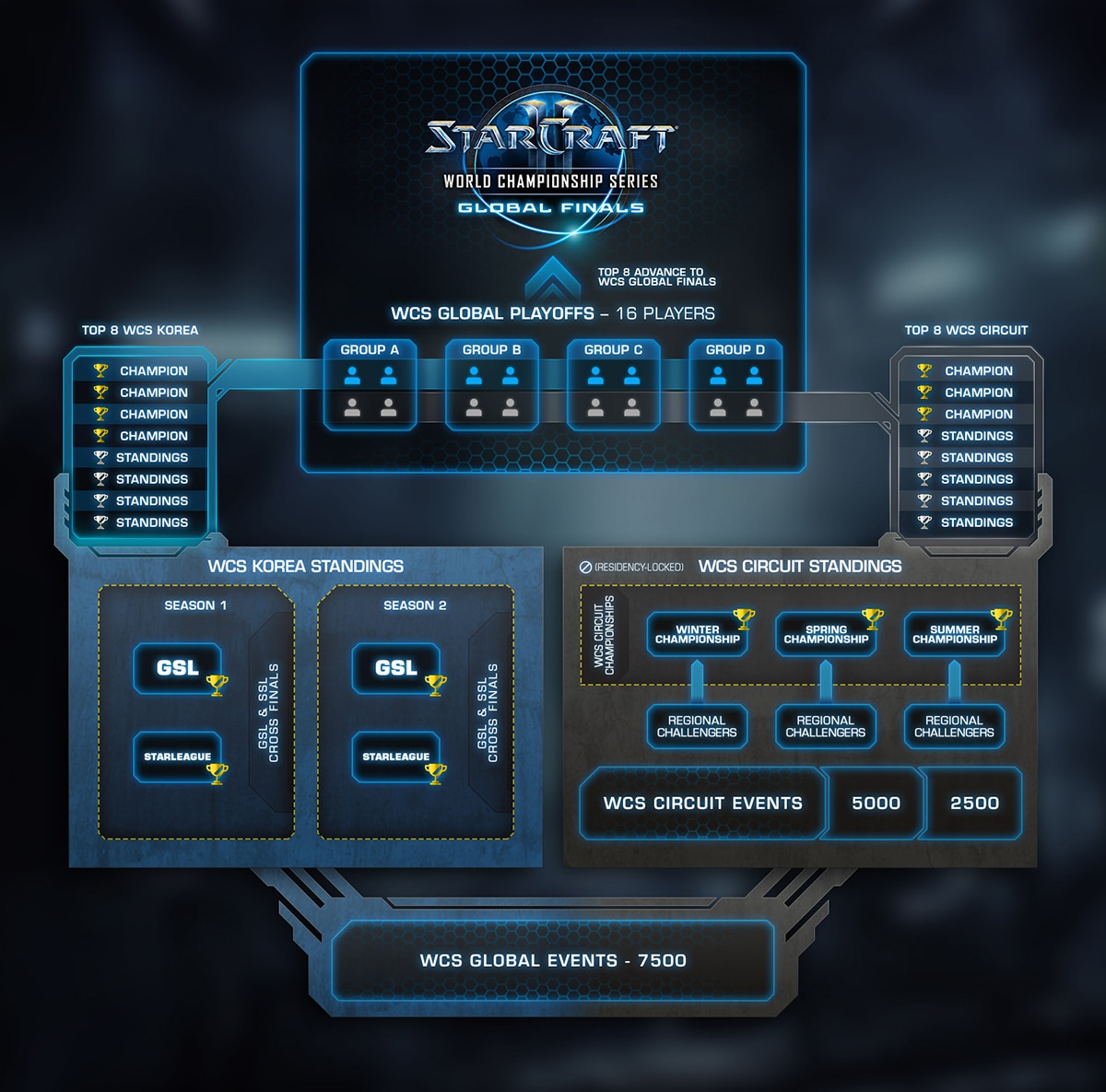 The WCS Korea Standings, open to all players globally, represent the most competitive StarCraft II tournament system, where the very best of the best players go head to head. The vast majority of the league play in this system will take place in Korea, where the highest number of professional StarCraft II teams and players live, train, and compete.

To make it so more people can follow these exciting tournaments and to open up space in the schedule for the cross-finals, each league will operate two seasons next year, with a significant increase in prize pool for the leagues. We are also working with our partners to offer GSL and SSL rebroadcasts during additional peak times.

In order to earn points for the WCS Korea Standings, players must compete in one or both of the two official global leagues (GSL and SSL). Players can also earn WCS Korea points by competing in sanctioned WCS Global Events. Third-party tournament organizers can apply to host a Blizzard-approved WCS Global Event if they meet specific requirements.

Top WCS Korea Standings point earners and champions from GSL and SSL receive direct slots into the WCS Global Playoffs. There are eight spots up for grabs total:

Each season of GSL and SSL will conclude with an epic GSL vs. SSL cross-final match, bringing together the top two players from each league.

The WCS Circuit system is an evolution of last year’s WCS Premier League, with the goal of further enhancing the quality of StarCraft II play in all regions. The WCS Circuit Standings represent pro players living and competing in any region where the StarCraft II competitive scene is still developing and growing, including North America (NA), Europe (EU), Latin America (LATAM), China (CN), Taiwan/Hong Kong/Macau (TW), and Australia/New Zealand/Southeast Asia (ANZ/SEA). In order to compete in the WCS Circuit, players must be citizens or residents in one of the eligible regions. Any non-citizen player will be required to compete regularly on the local ladder, and will have other guidelines to fulfill. You can read the expanded 2016 residency rules in our Requirements blog.

One of our goals with the WCS Circuit is to create more opportunities for highly skilled hometown heroes to pull off epic moments on grand stages in front of cheering crowds. The best of these players will advance to the WCS Global Playoffs to test their mettle against the highest tier of pro gamers in the world. We’re working with our partners to encourage the development of skilled players all across the globe, through travel support, prizing, and by exposing players to international and local competition.

Top WCS Circuit Standings point earners and champions from the WCS Circuit Championships will receive direct slots in the WCS Global Playoffs. There are eight spots up for grabs total:

WCS Circuit Events will represent a wide range of tournament sizes from traditional $25,000 tournaments to the $150,000 Championships. Players will travel all over the world to shape their skills and hone their strategies. These events are split into two tiers: 5000-point events and 2500-point events. The level of the event is directly tied to the size of the prize pool and the regional requirements.

Each WCS Circuit Event will be an international affair that also highlights the passion of local StarCraft II players. Organizers will be free to allocate the regional spots not supported via paid travel and accommodations by Blizzard. For more information on the WCS Circuit Event requirements, check out our Requirements blog.

Any WCS 2500 Circuit Event can apply to be boosted by Blizzard to the 5000 level, with an additional $25,000 in prizing sponsored by Blizzard to increase the grand total for each boosted event to $50,000. Blizzard will also sponsor eight players in the citizenship-locked Circuit Passport qualifiers to level up the competition. The Blizzard Boost will be open to up to eight events during WCS 2016. 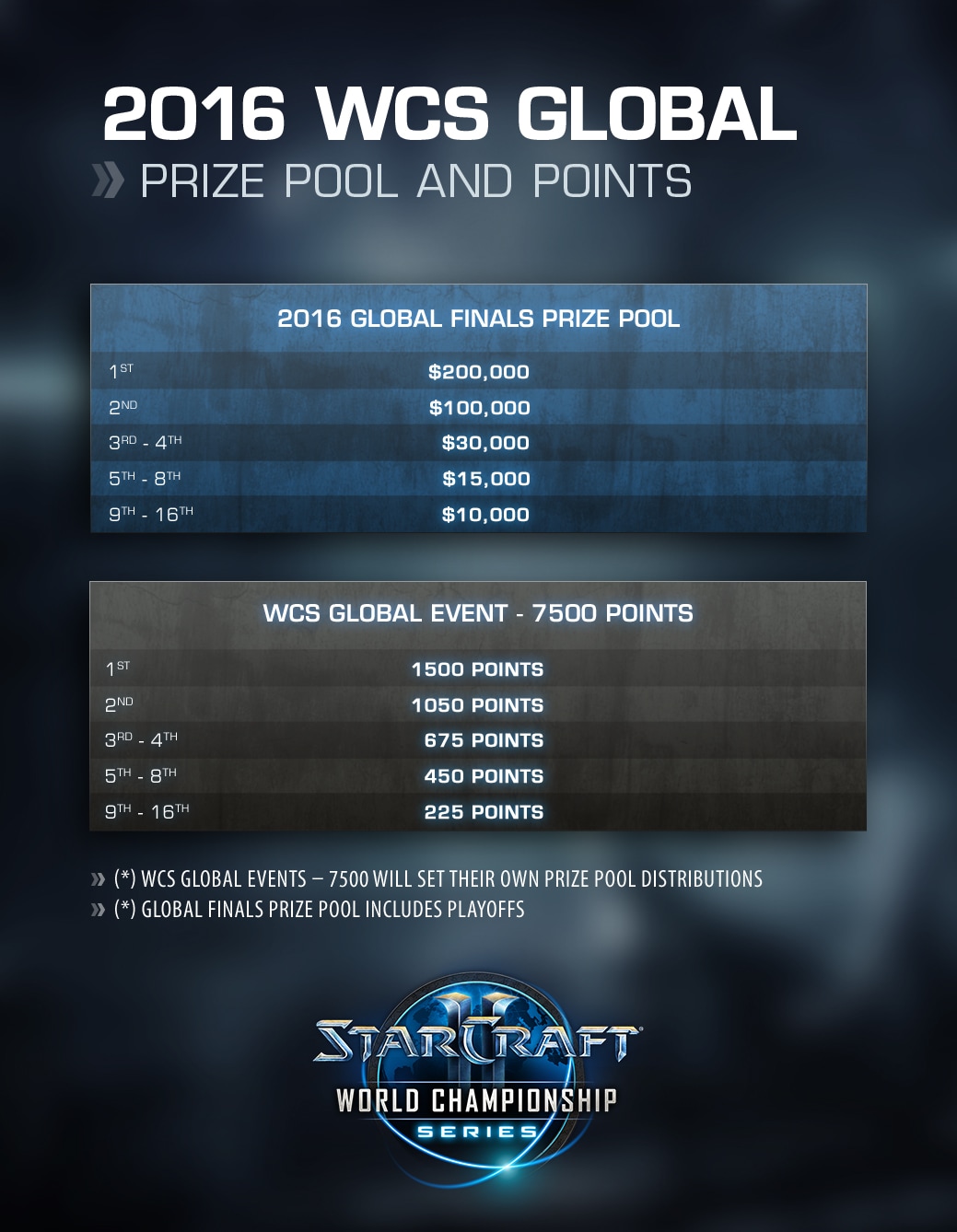 The WCS Global Playoff (which took place during BlizzCon Opening Week in 2015) will be an event hosted by Blizzard Entertainment that brings the WCS Korea and WCS Circuit systems together.

After a full year of competition and an intense journey through the WCS Global Playoffs, players will meet one last time at the WCS Global Finals, where the world champion will be crowned. This year, we’re doubling the prizing to recognize the feats of the exceptional players who make it to the top. The WCS Global Finals represent the pinnacle of excellence in StarCraft II competition, and only one champion will be crowned and have their name affixed to the Gosu Trophy for all time!

The GSL and SSL are the most prestigious StarCraft II tournaments in the world, and for WCS 2016, the prize pool and points are increasing! The prizing for the Korean leagues will significantly increase, and we’re adding a special new cross-finals competition with its own prize pool . 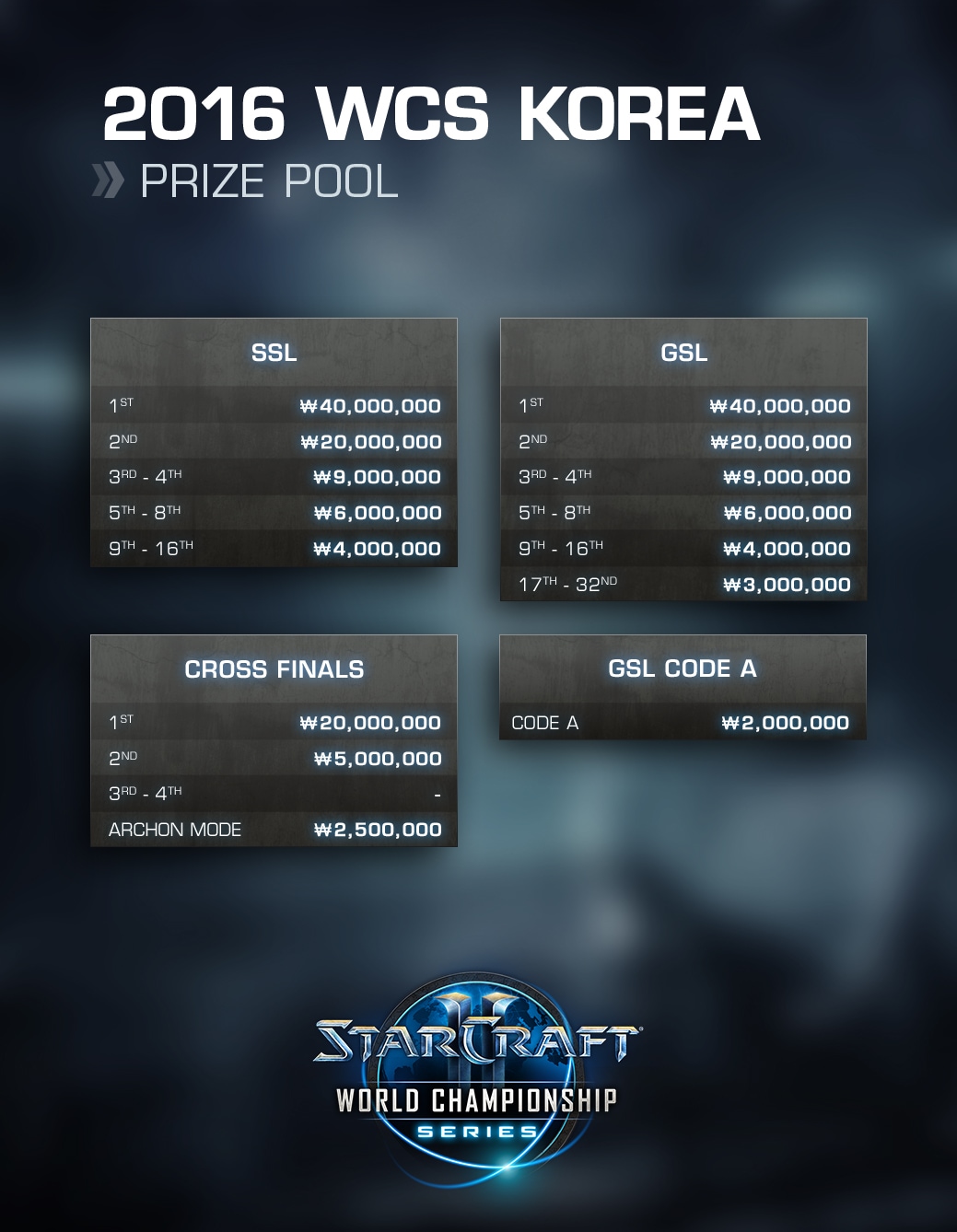 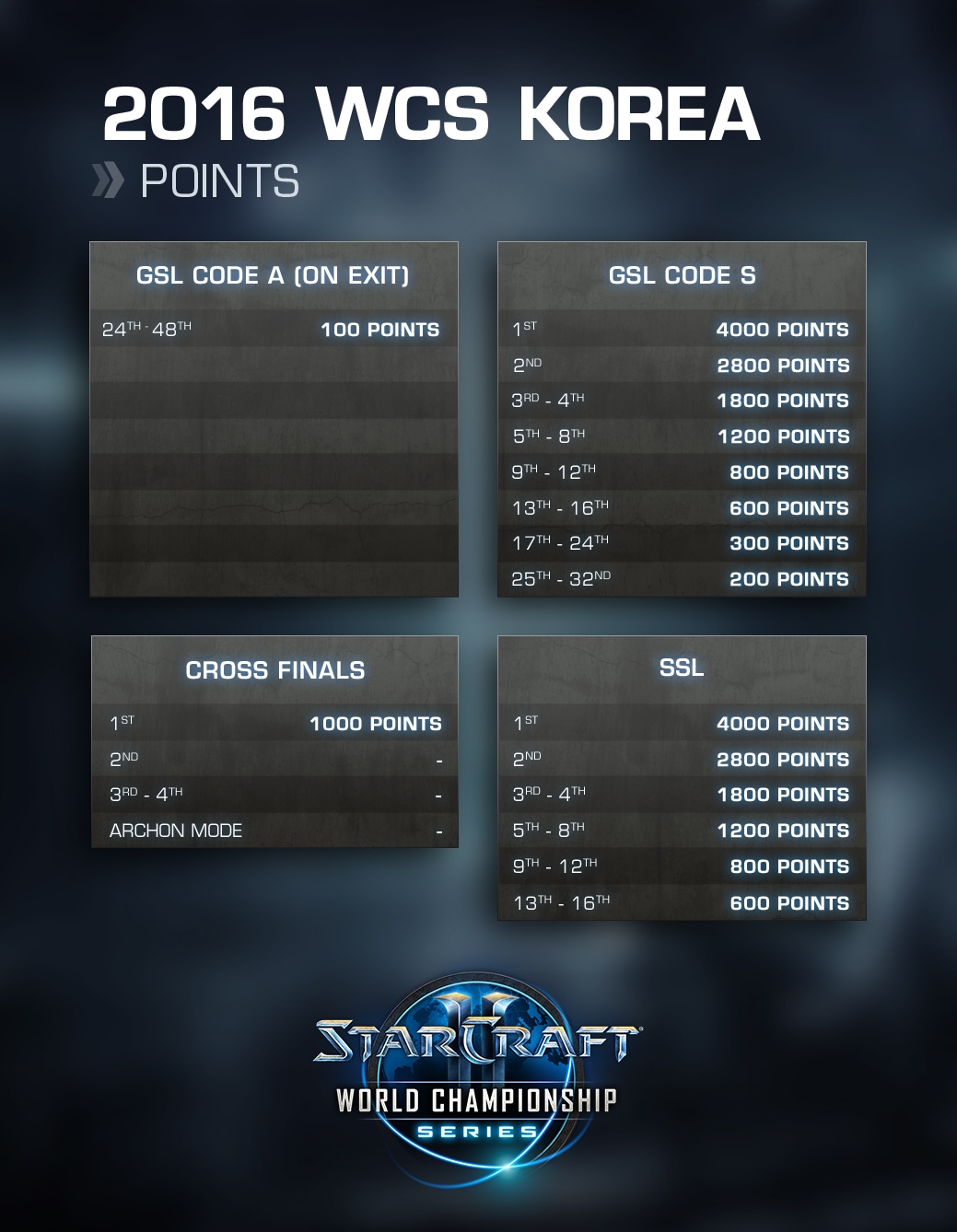 The overall prize pool for the WCS Circuit has increased in 2016, but the distribution of the prize pool and points will spread to more tournaments and goes deeper than ever before. The combination of Regional Cups, Regional Challengers, Circuit Events, and Circuit Championships will provide many more opportunities to gain points and prizes. 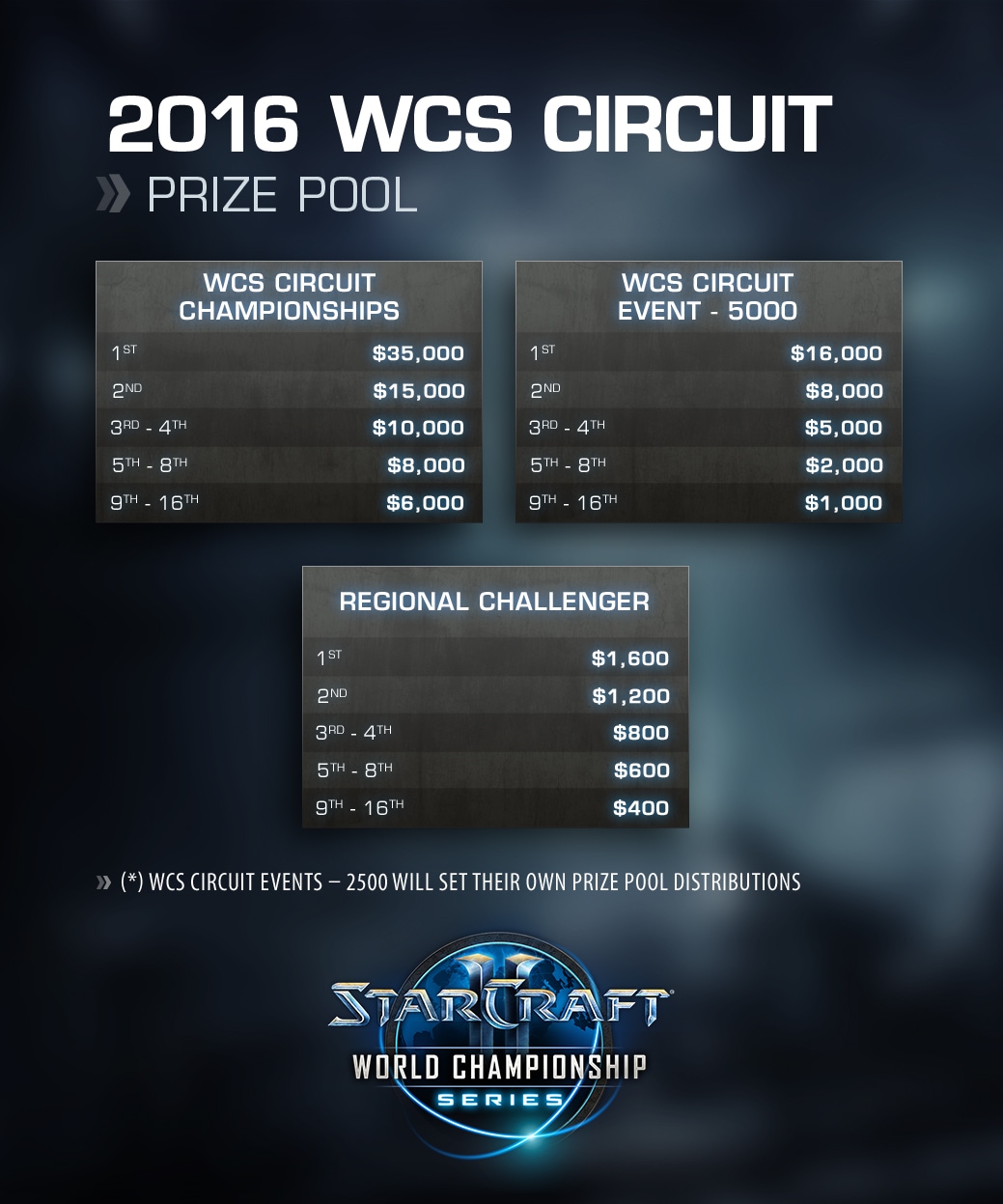 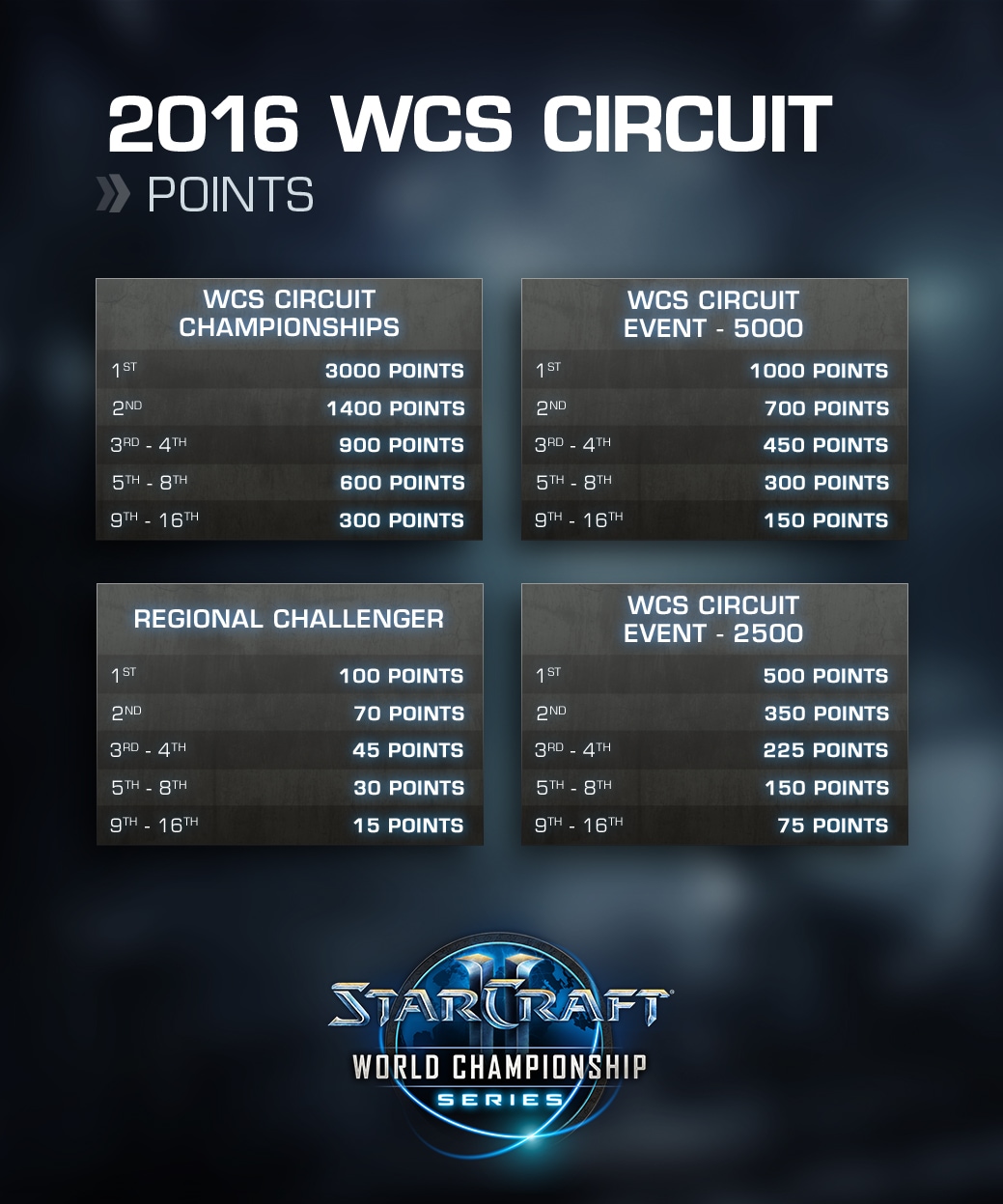 Setting up an epic year in StarCraft II ESports

We’re excited for what’s to come in 2016. We look forward to seeing what new stories await us and what special moments we’ll all share together. If you’re looking to keep up to date on the happenings around WCS, keep an eye on the WCS website and on our Twitter and Facebook pages for more!

If you’re interested in partnering with Blizzard on any of our new initiatives for 2016, please reach out to esportsteam@blizzard.com. For more details on our 2016 plans, check out our Requirements blog.