In the first part of our two-part deep dive on matchmaking and competitive we’ll look at how matchmaking works under the hood and answer some outstanding questions around how MMR is determined and factored into the system.

Ultimately, the goal of matchmaker is to create as fair matches as possible across all game modes. We know matchmaking can be a source of frustration, especially in competitive, and we’d like to recognize it doesn’t always feel like it’s meeting its goal.

In order to address your thoughts, we need to dissect the matchmaker and competitive systems separately before going into how they affect one another. In part 1, we talk about how the matchmaker works, some of the challenges we’ve faced, and some of the ways we’ve started to tackle those issues.

Our matchmaker is designed to create balanced matches. To do that, we need some approximation of each player’s skill.

Everyone has an internal matchmaking rating (MMR) that’s a numerical value to describe your skill relative to everyone else. However, MMR isn't an absolute value, meaning your MMR can change even if your personal skill stays the same. This could indicate the general population is getting better or worse compared to you. You can see this in the example below that displays player MMR in quick play, with most of us right around the middle of the curve. 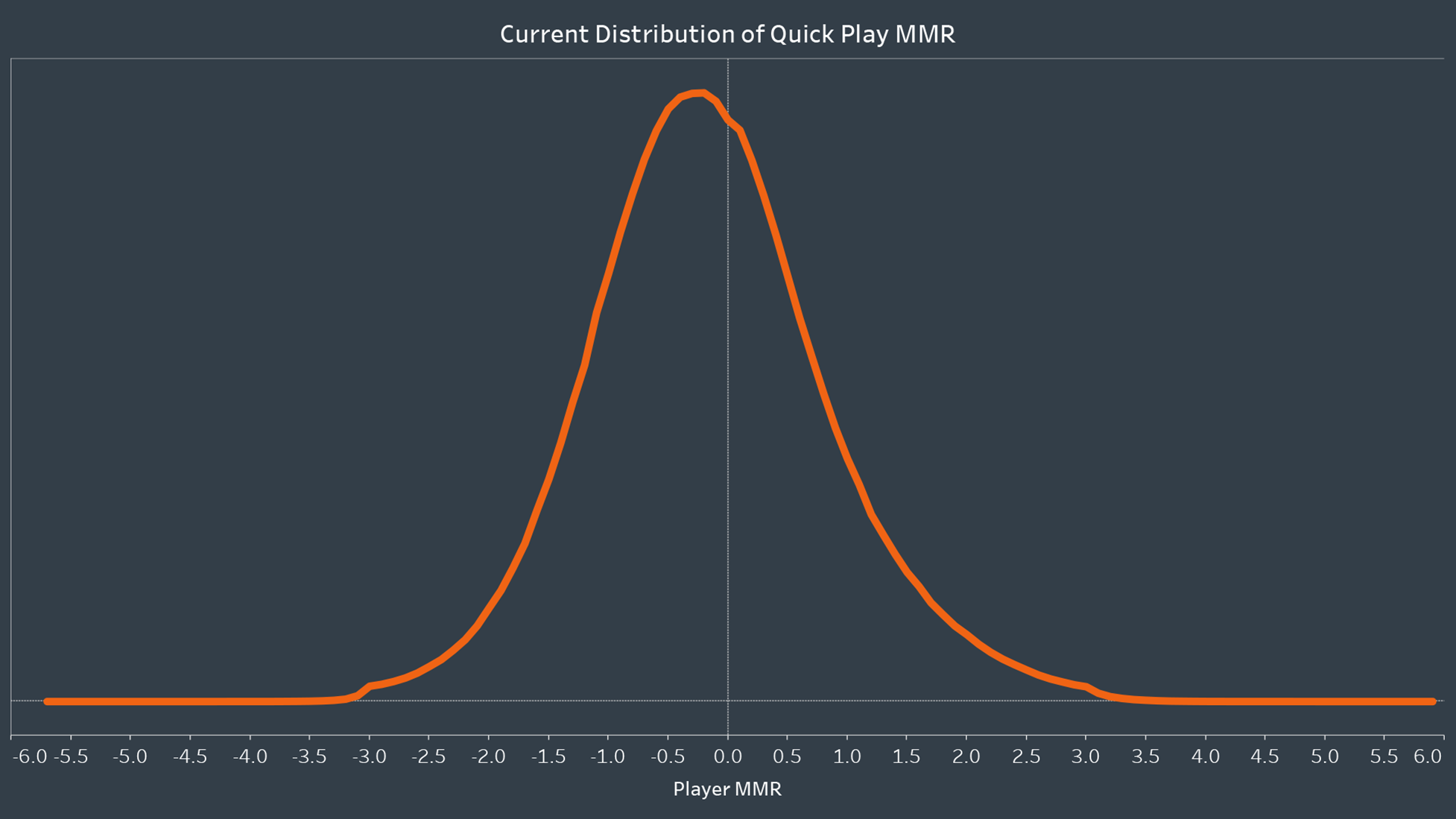 Your MMR will rise over time if you improve your skill and win more games against players of your current MMR level. All our game modes, including Competitive, only look at MMR when forming a match. We never use your outward facing skill tier or division to form matches. Likewise, the rank you see in a player’s profile isn’t the same as their MMR.

We only adjust your MMR after you win or lose a game or if you come back after not playing for a long time. Your MMR is unaffected when we lower your rank at the beginning of a season, and everyone in your matches has a similar MMR as you. Initial ranked matches can feel turbulent because many players return at the beginning of a season, and anything that changes player population is going to affect the matchmaker.

It’s also important to remember that our teammates are human. We don’t always perform the same from game to game or even team fight to team fight. This inherent variance in our individual performance means that the matchmaker needs the results of as many games as possible to get an accurate representation of your skill.

We love seeing you group up and have fun together because we believe Overwatch 2 is a game best shared with friends! Grouping up does, however, influence the matchmaker in a few different ways.

When players group together, there’s the possibility that the group has a larger skill difference than a match we’d typically like to make. Those of you at the very highest levels might notice these skill differences more too because there’s far fewer players at the very top of the MMR curve.

We can’t always avoid these types of matches, but we can make them feel better. These matches can often feel imbalanced if they create situations where there’s a large disparity of skill within a single role between the two teams. For example, we might match a highly rated tank against a comparably lower rated tank, so even if the overall match is balanced, the competition between tanks feels very one-sided.

We’ve got changes coming to the game over the next few months which will dramatically reduce these disparities. We’ll try to find pairs of similarly rated players in each role when making a match. For support and damage roles, which have two slots, each player will be paired with one player on the opposite team. There will still sometimes be matches with a large range of differently skilled players, but in these cases, the two teams will be more like mirror images of each other.

However, even with these improvements, there will always be times when we make matches that have a skill disparity that isn't reflected in MMRs because some players in the match aren’t calibrated. We've seen this much more frequently since Overwatch 2 launched and we welcomed a large influx of new players.

Setting up new players for success

Overwatch 2 is a lot to learn! It’s a fast, team-based hero-shooter where players juggle the gameplay of a traditional FPS, the unique abilities of a diverse hero roster, and many different types of game modes and maps.

We’ve tackled the learning curve from multiple directions to help ease new players into Overwatch 2. The most visible change was adding the first-time user experience at launch, but there’s also an invisible change we’ve been working on in the background: better matchmaking for new players.
We noticed that new players were losing their initial matches much more than they should have, and this trend wasn’t levelling out enough by the time they’d played many more matches. The win-rates of new players should be normally distributed, meaning most should be hovering around a 50% win-rate, but instead, the distribution was skewed with new players losing at higher rates.

This challenge is more difficult since the matchmaker has no initial data on a player’s skill when they enter their first match. We’ve tried to remedy this issue with two distinct changes:

First, new players initially started at an MMR value slightly below average. You can think of it in terms of skill tiers around the lower divisions of Silver. This was already below the center point of the player base's MMR distribution, but the new player win rate was still too low. We’ve since lowered the starting MMR to a rating equivalent to Bronze 5 and instantly saw huge improvements for new players with a sub-40% win-rate. 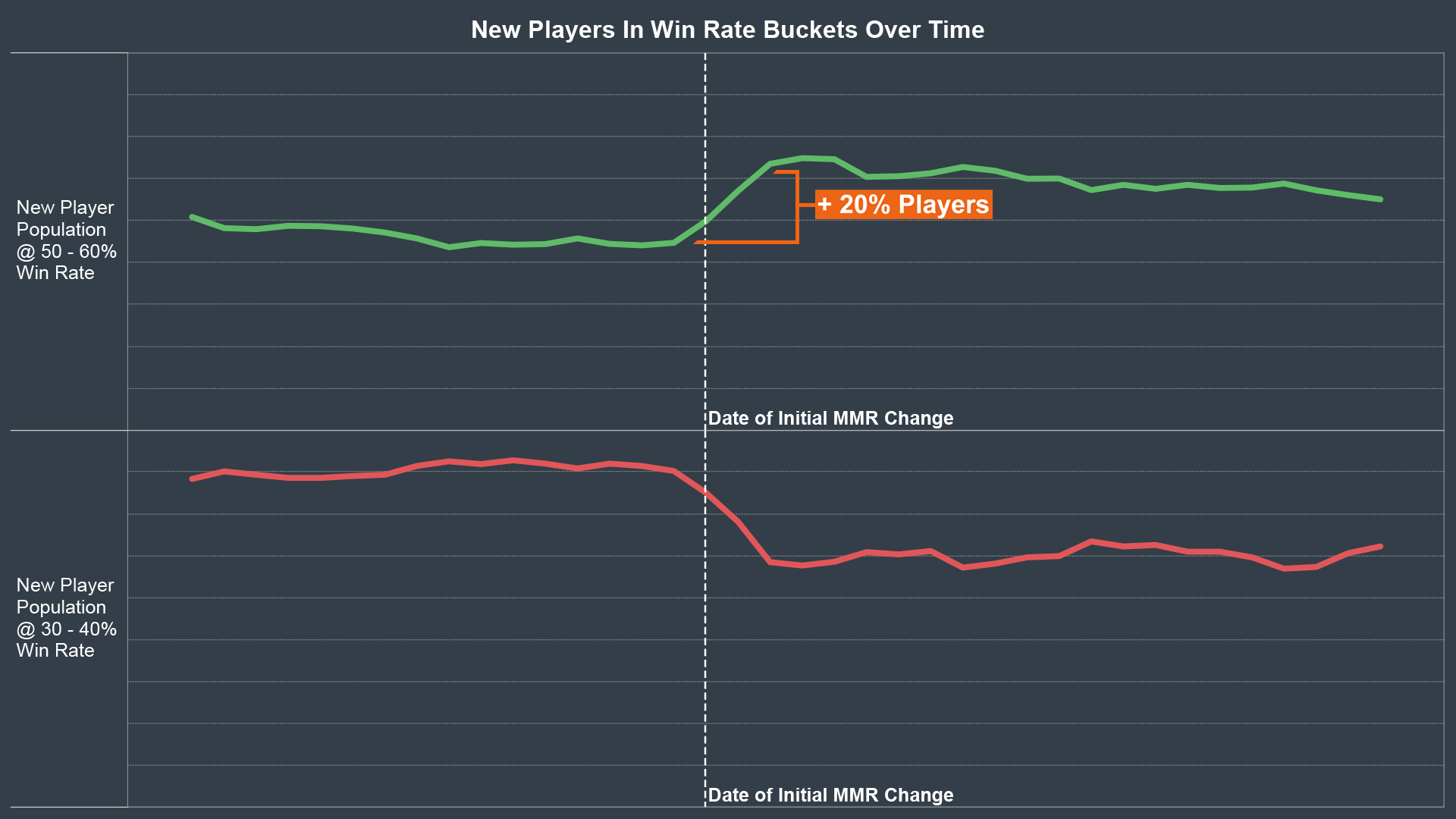 If you’re playing with or against a new player in Overwatch 2, these games should now broadly be fairer.

The second change we implemented was aimed at new players who did not belong at the initial MMR. Initial matches are weighted differently than standard matches because they increase and decrease MMR at a much higher rate than usual. We want to adjust a player’s initial MMR as quickly as possible, because until their MMR is more properly calibrated, we’re not able to make fair matches.

However, this still meant that it took several games for players to get to where they belonged. To improve this, we added a streak modifier system that tracks a moving average of a player’s win rate. When a player wins more than 50% of their matches, we start to increase their MMR faster. This levels out once we see the player’s MMR value has them joining fair matches, which corresponds to a 50% win-rate. With this change, we’ve seen that new and returning players reach a 50% win-rate with much fewer matches than before.

The faster we can calibrate a new player’s MMR, the fewer unfair matches we’ll create not just for that player, but for the other 9 players in the match.

Overall, we think this was a huge improvement to the new-player experience, which in turn should result in better matches for everyone. There will be more information on updates in the future, but until then, please keep sharing your feedback—it’s our most valuable development resource!

We’re continuing to analyze data, tune values, and evaluate more changes to the matchmaker. Our highest hope is to make a match that feels fun for everyone, even the team that loses. We feel strongly that the best way to achieve this is to make matches that are as fair and balanced as possible.