Legendary new looks: Behind the scenes of the 2021 Overwatch Archives skins

A dragonslayer. A samurai. Two revolutionary soldiers championing contrasting causes. All four disparate figures lost to time, united by the ink of talented concept artists from around the globe for this year’s Archives event. To create some of the history-rich skins, Overwatch teamed up with Yusuke Kozaki, a Japan-based character designer who has worked on games like Fire Emblem, Pokémon, and No More Heroes.

Each Legendary skin from this year’s assortment of Archives ensembles draws from different historical eras in the characters’ respective home countries. Zarya dons the garb of a bogatyr, a Russian knight-errant possessed of strength, bravery, and dragon-slaying power befitting one of the strongest characters in Overwatch. Genji, decked out in elaborate armor, has assumed the guise of a samurai from the Sengoku era, when Japan’s feudal system fell and samurai warlords and warrior clans fought to claim power in the wake of its collapse. Tracer and Soldier: 76, meanwhile, stand on opposing sides of the Revolutionary War, each donning a tricorne hat and colored coats characteristic of their respective armies.

Learn more from Kozaki and Overwatch concept artists David Kang and Daryl Tan about the history and hard work that went into Cavalry Tracer, Soldier: 1776, Bushi Genji, and Polyanitsa Zarya.

So, Yusuke—tell us a bit about yourself. How did you get started as an artist in the industry? What’s your day-to-day like?

Yuzuke Kozaki: My dream when I was 10 years old was to become a comic artist, and when I was around 19, I was actually able to make my comic debut in a magazine! After that, I opened up my own illustration website, and from that I slowly began receiving more and more character design and illustration work, and I guess the rest is history. As for my day-to-day, I've taken up a new job—looking after my two daughters. I really like cooking, and I often cook to relax. I think of both cooking and drawing as a form of art; being able to see the effects of supporting my family through cooking immediately is really very fulfilling. On top of that, I like taking my bike and going for a ride. Last year, I biked 370 miles from Tokyo to Osaka! 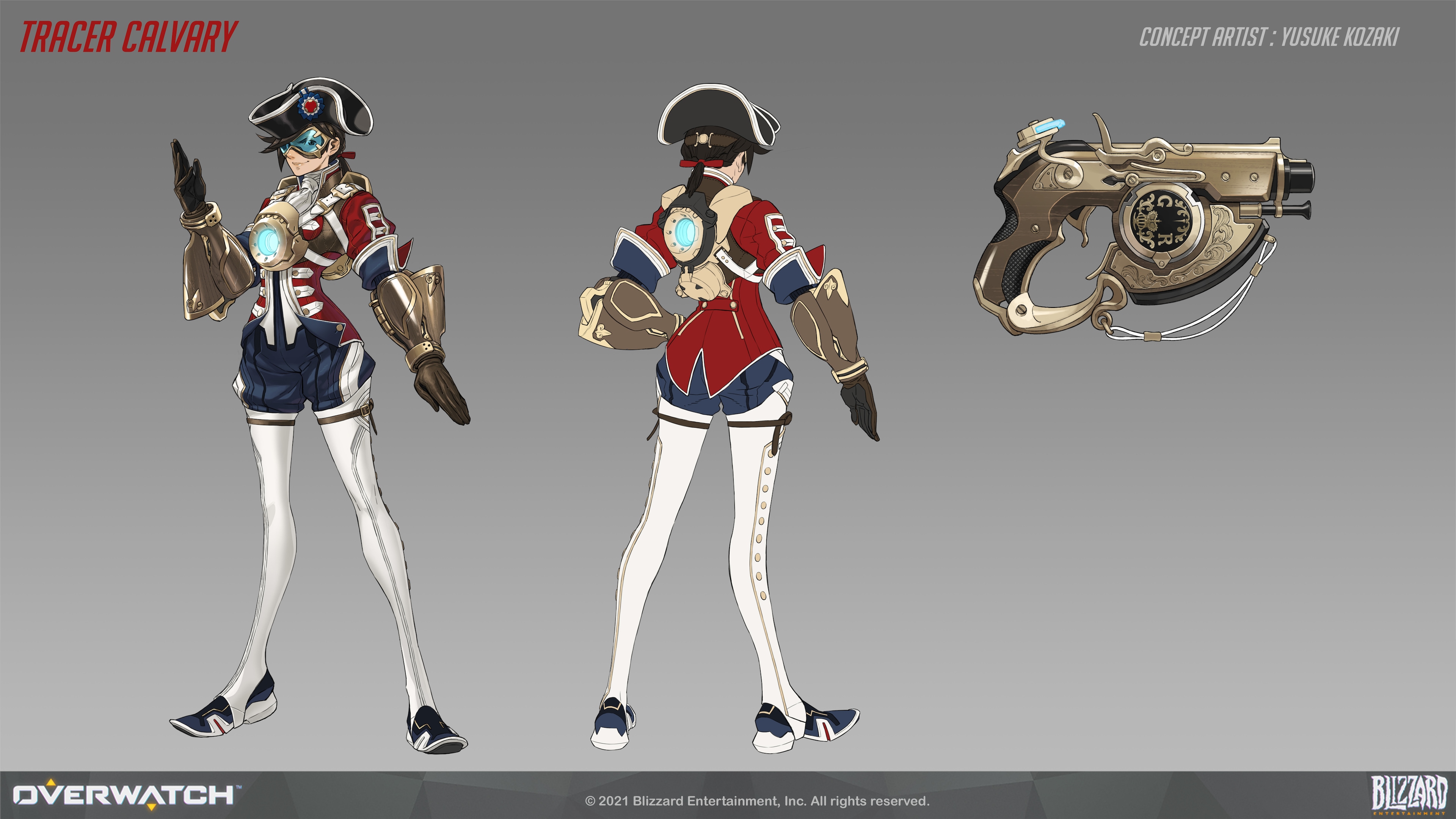 What's your favorite thing about Overwatch?

Kozaki: I love the team aspect of Overwatch. Being able to get together with friends and battle is just so fun. But, my favorite thing has to be the power of the designs within Overwatch and its art. Though there are limits to what art can do, I really feel that there is this appeal that Overwatch art has that transcends these boundaries. I am always amazed at how art can both be visually appealing and have an effect on the unconscious human mind at the same time.

What excited you most about working with the Overwatch team?

Kozaki: I have to say that the back-and-forth of trying to match the design to the overall feel of Overwatch and the continuous process of improving and polishing the designs was the most exciting thing for me. [Overwatch character art director] Arnold Tsang, who requested these designs, used to visit my website often when he was a student, and though we never really talked with each other back then, I just feel happy and honored to be able to work together with him like this on the big stage! 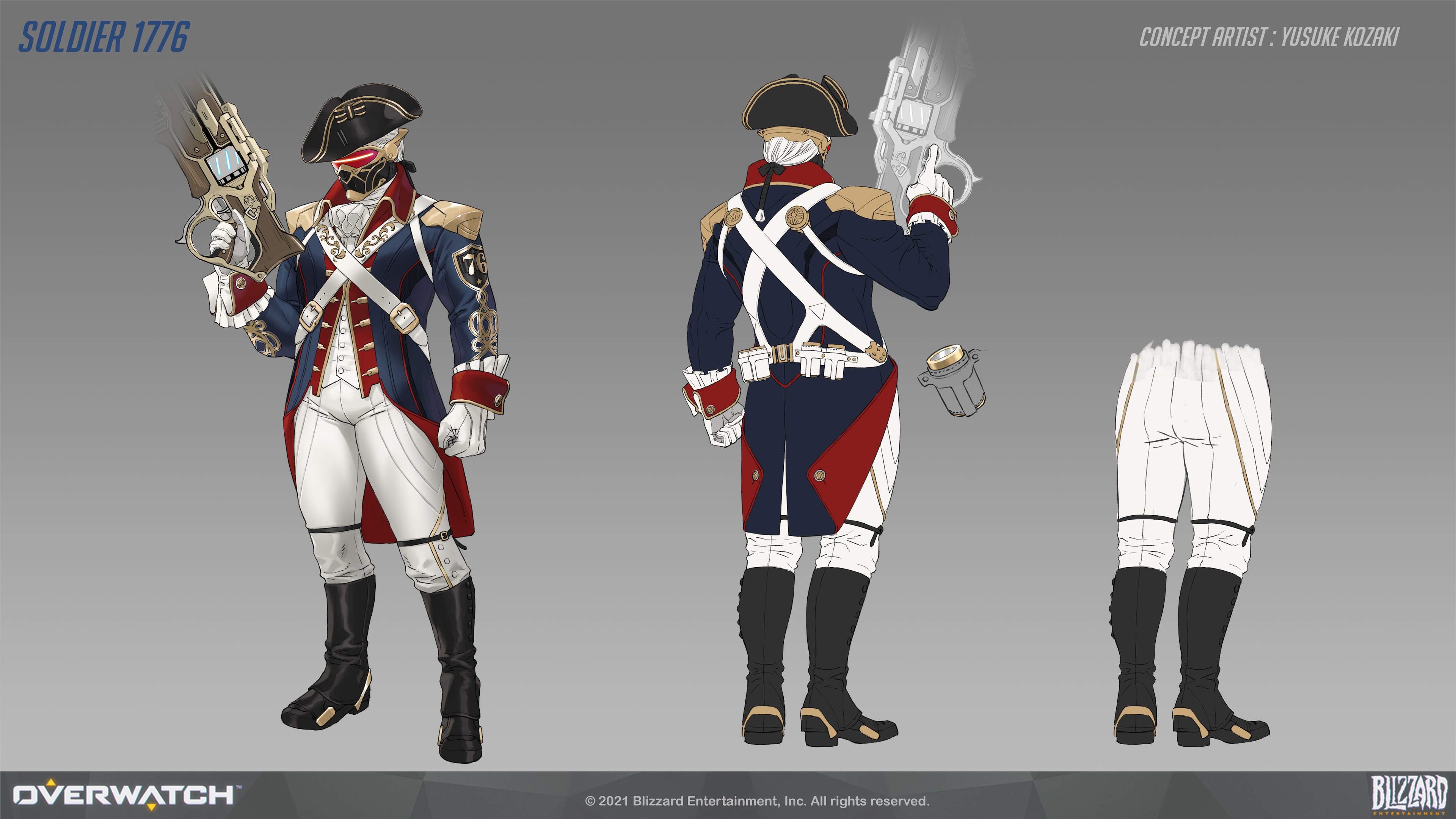 What was the specific historical inspiration for the skins everyone designed?

Daryl Tan: For the general direction of Bushi Genji's design, we leaned a little more towards samurai armor where it was less about ornamentation and more practicality. I think we searched for more Sengoku era samurai armor during the research phase, but we weren't married to that idea.

David Kang: For Zarya, we did the initial sketch in-house and sent the rough concept to our talented outside collaborators to polish and finalize the skin. Her design was a fun design to work on. The Polyanitsa skin is based on a Russian knight called a bogatyr that appears in a lot of the folktales and paintings. It would have been hard to get the feel and armor designs right if it weren't for our producer Natalia, who is from Russia. We had a lot of back-and-forth feedback throughout the process.

Yusuke Kozaki: [For Soldier: 76 and Tracer], I added details into my design by taking inspiration from soldier uniforms from the American Civil War and War of Independence. 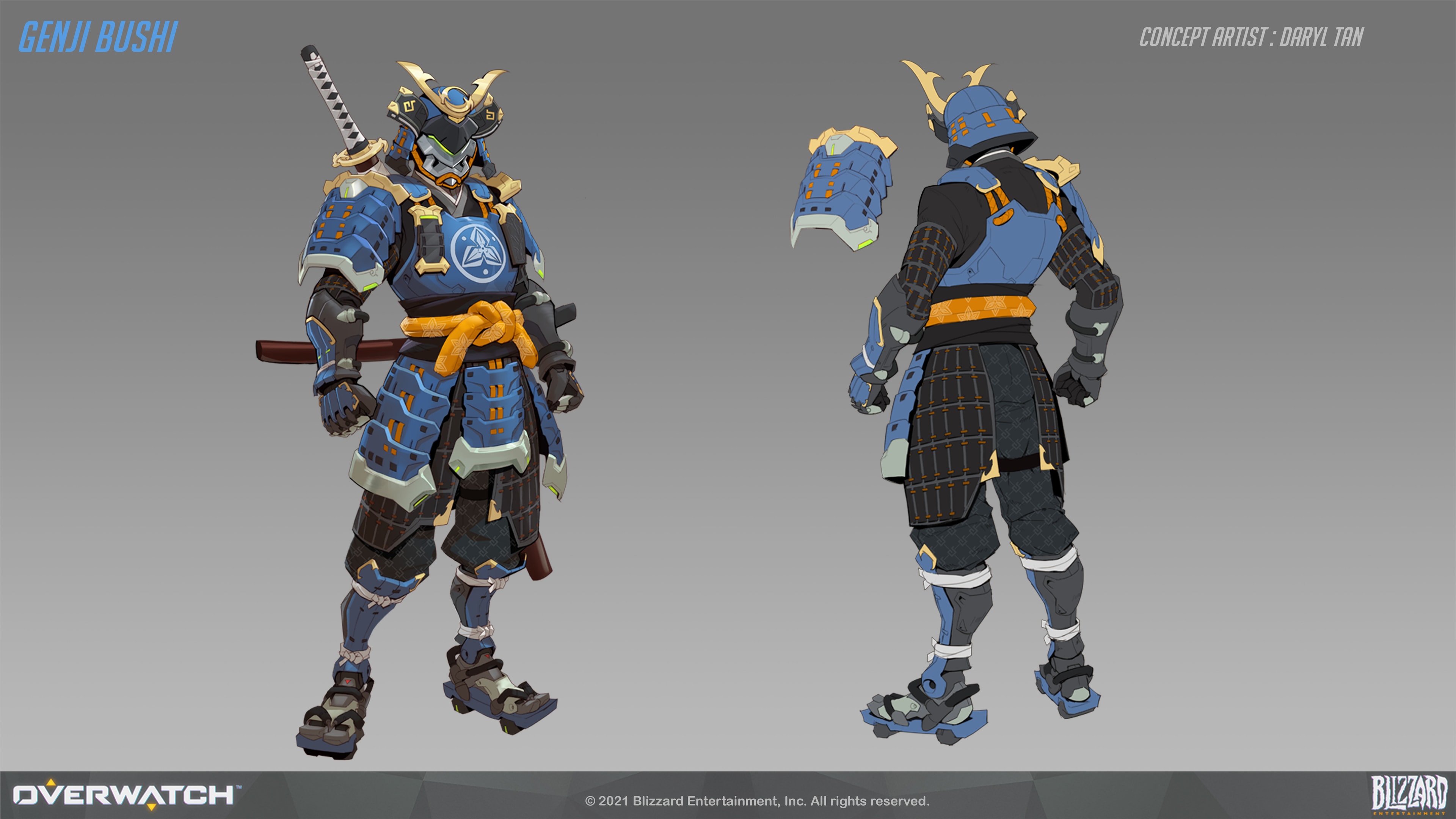 How do you see the theme of each skin tying to its character?

Tan: I think it was pretty easy to see Genji as a Warring States era samurai. I can see him swift-striking foes down in broad daylight on the battlefield, armor glinting in the sun as he's soaked head to toe in blood. Talking a little about Bushi Genji's design, my first step was to lock down the look of his face plate: how would Genji's face plate look without incorporating any oni or demon masks, to avoid stepping on Oni Genji's toes? Once I had that down, the rest of the elements fell into place pretty easily.

Kang: I thought the theme was a great fit for Zarya, as she is like a modern-day knight with futuristic armor. The historical knight armor design fit very well on her and looked like it belonged. A bogatyr is also a slayer of dragons, so we tried to implement the dragon theme into the character—especially with her weapon.

Kozaki: I find that the dichotomy of pairing the United States and United Kingdoms with Soldier: 1776 and Cavalry Tracer was key to these designs. 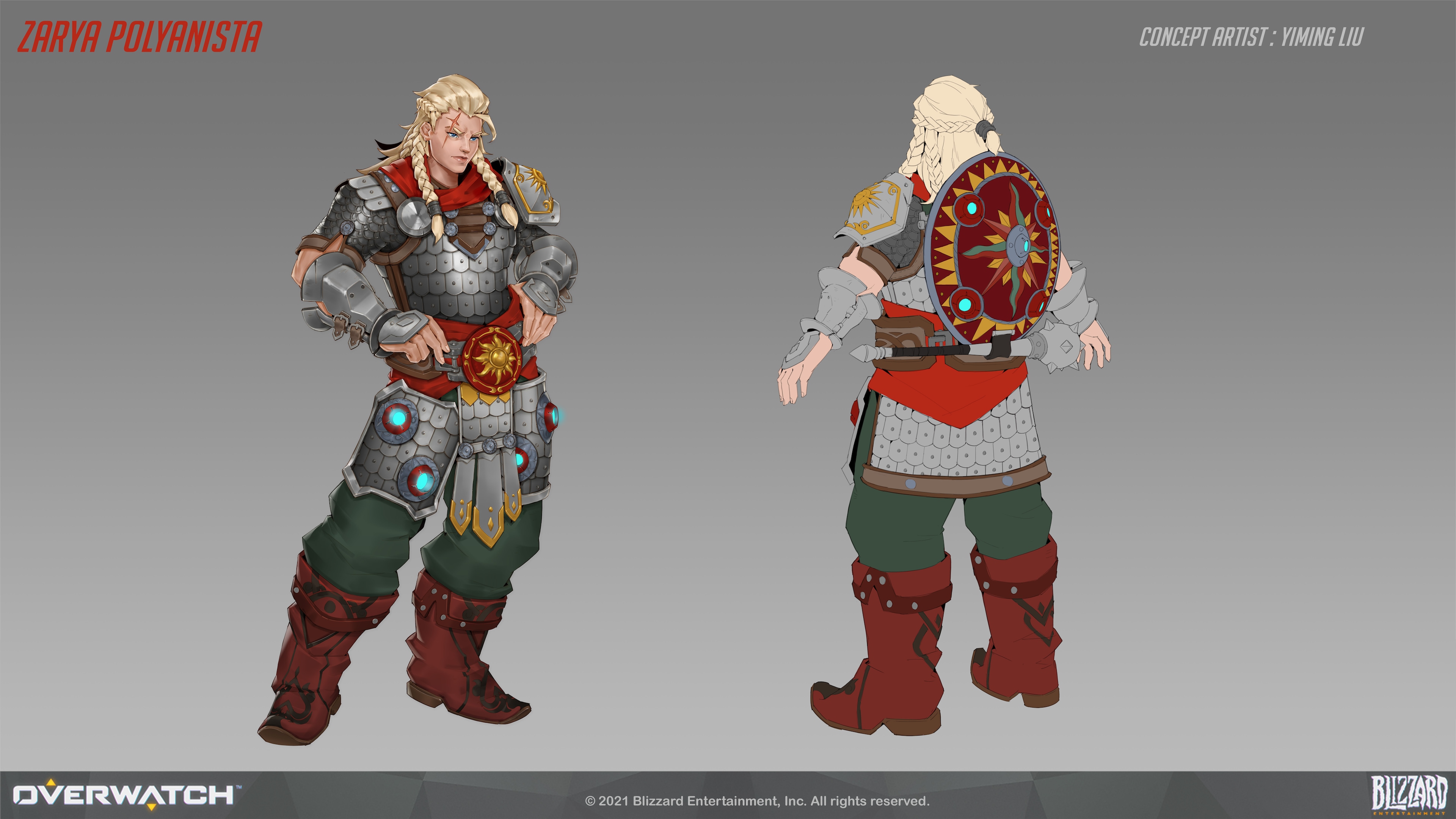 What was the most interesting part of the design process?

Kozaki: I had an amazingly fun time from start to finish! I would have to say the best part of this project was the process of trying to take certain elements from my inspiration and recreating them in new designs without changing my chosen elements.

From now until April 27, take another trip into the Overwatch Archives. Dive into story-driven co-op missions from pivotal moments in the past, test your mettle against new deadly new Challenge Mission modifiers, and earn historically inspired loot, including Cavalry Tracer, Soldier: 1776, Bushi Genji, and Polyanitsa Zarya, along the way.