At Blizzard, we make games to bring people together, and yet it’s still such a wonderful surprise to learn of the players who stay together. In celebration of Valentine’s Day, we interviewed a couple of couples who decided to make their two-stack life-long after finding each other through Overwatch.

After a rough breakup, Katja truly believed she would never find a romantic partner again. Then she met her future husband, Chris, on a fan-art Twitch stream. Katja, born and raised in Germany, says she was brought to that particular stream because the artist was painting her favorite hero, McCree (who she has 600 hours of playtime on), in his 2017 Halloween Terror event skin: Van Helsing.

Katja talked to Chris for the very first time on that Twitch stream, and joined the artist’s Discord server afterward to continue talking to him. What made Chris stand out, Katja says, was how kind he was on an internet that wasn’t always so friendly to her. Chris, who lived in Australia at the time, says he was surprised when Katja stuck around to keep chatting after the stream.

That was the beginning of many weekends spent playing Overwatch together until the morning hours, even across nearly 10,000 miles and a nine-hour time difference. Not to mention the ping—or lag—Chris tolerated, since he was playing on European servers all the way from Australia rather than on servers closer to home.

“I played I think 50 hours of 350-ping Torb,” says Chris with weariness befitting a sailor just back from circumnavigating the globe.

“He was a gentleman,” Katja laughs.

After playing together for months on end, Katja decided it was time to take a risk. She gathered all her courage and asked Chris if she could visit him in Australia. He said yes. Then, after spending two weeks together in Australia and five weeks after that deliberating, Chris took a risk of his own—he put in his notice at work and moved to Germany.

“Those were the longest five weeks of my life,” Katja says. “I was so amazed that someone would do that for me without any safety net.”

He arrived with a single suitcase filled with his belongings. His computer came a little later, of course. In two short months, the couple was getting married, and Katja had to call her mom to let her know that she not only had a boyfriend, but that their wedding was happening in just a few weeks.

Chris met Katja’s mother and sisters all at the same time—on the wedding day. The couple says the ceremony was very special, and they even got a running joke out of it.

“The lady who was doing our ceremony made a cliché that was something like ‘love is like a tree,’ meaning that it has roots and grows over time,” Katja explains. “Our friends were very amused by that and started saying ‘Overwatch is like a tree.’ Now we have a little board in our home with that quote on it.”

Chris and Katja have been married for a year and a half now, and have a healthy baby boy named Jesse. They say he is their last hope for having a Grandmaster in the family. 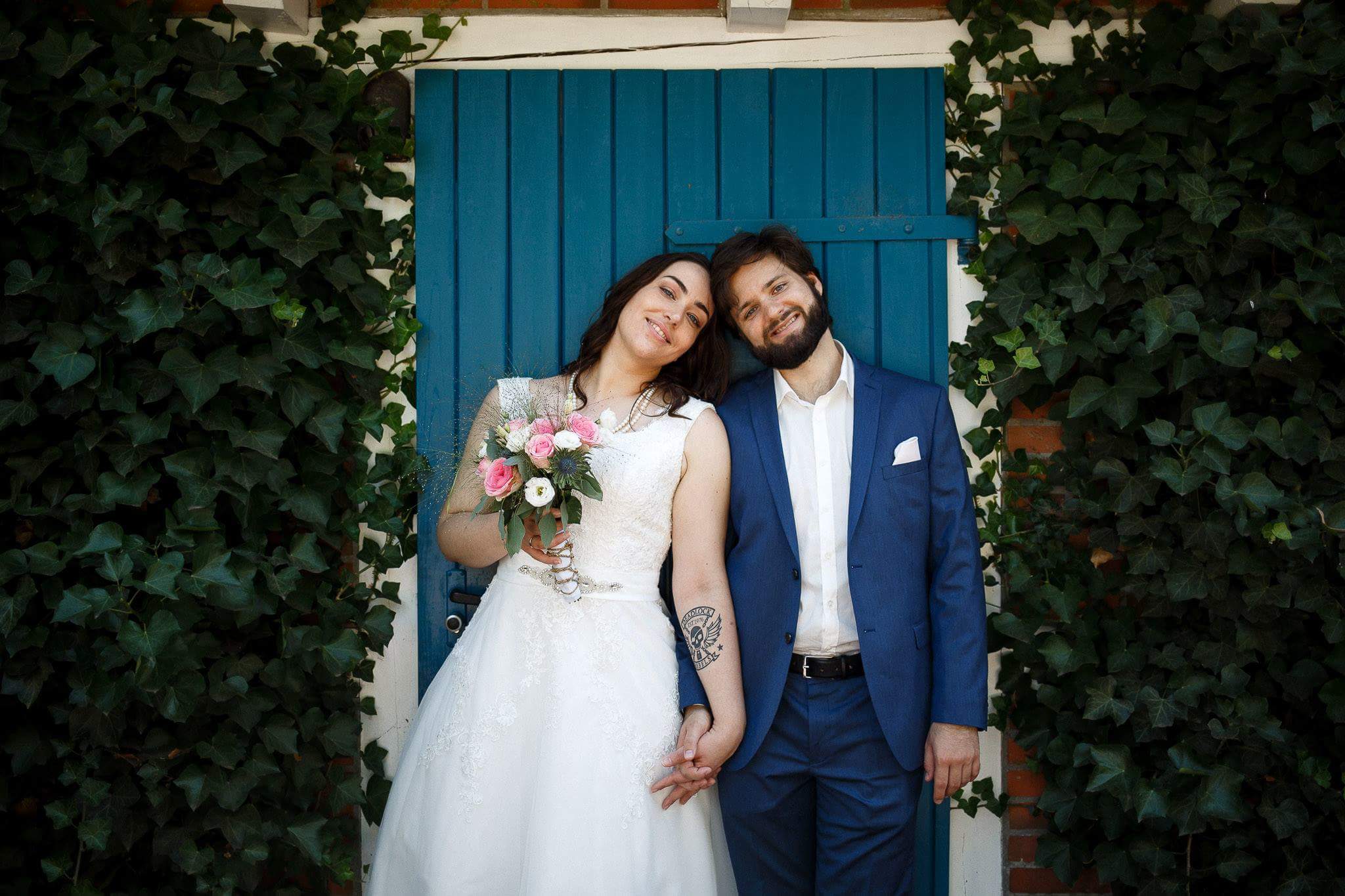 Raisa and Jiv met through mutual friends on a group date at an escape room, but they tell us Overwatch is where they really fell in love. The weekend they met, Raisa watched Jiv play it and later called him at work to ask how to log in to the game.

“When I went back after work, I saw Raisa with a headset on, farming Roadhog as D.Va. Kind of knew she was a keeper then,” Jiv says.

Raisa, now a 250-plus-hour D.Va main, shares one of her first moments playing with Jiv and their gaming squad.

“I was Rein and they were telling me to charge, so I charged into my own team… but it was so exciting,” she says with a smile.

As they started playing together, Raisa and Jiv noticed it started to feel like more than just a game to them.

“We immediately identified ourselves in some of the characters and started to feel invested in their stories,” Jiv says.

They say it also gave them a way to strategize with and tease each other, keep in touch, and maybe most importantly, handle the ups and downs of life together.

“We were in a long-distance relationship, but when we got on voice chat [in-game] we always felt like we were right beside each other,” Raisa says.

When their wedding day finally arrived, the couple decided to include Overwatch theming in some of their festivities. At one point they played a game where Raisa and the bridesmaids performed the dance emote of each of the 21 original Overwatch heroes, and Jiv had a bingo-like sheet to help him guess which hero they were.

“I totally forgot the steps for Zenyatta’s dance,” Raisa says.

But that wasn’t all.

“I also said in my vows that I would get Raisa to Plat or die trying,” Jiv adds.

As icing on the wedding cake, Raisa’s wedding gift to Jiv was a signed poster from the Overwatch team.

“Best present ever,” he recounts. “I almost fainted when I saw Jeff [Kaplan]’s signature.”

The couple says they spend much of their free time now taking care of their baby and pet pug, but that they sneak in a game or two of Overwatch when their son takes naps. They hope to stream together when the baby is a bit older, but are saving their Overwatch highlights in the interim for a montage. 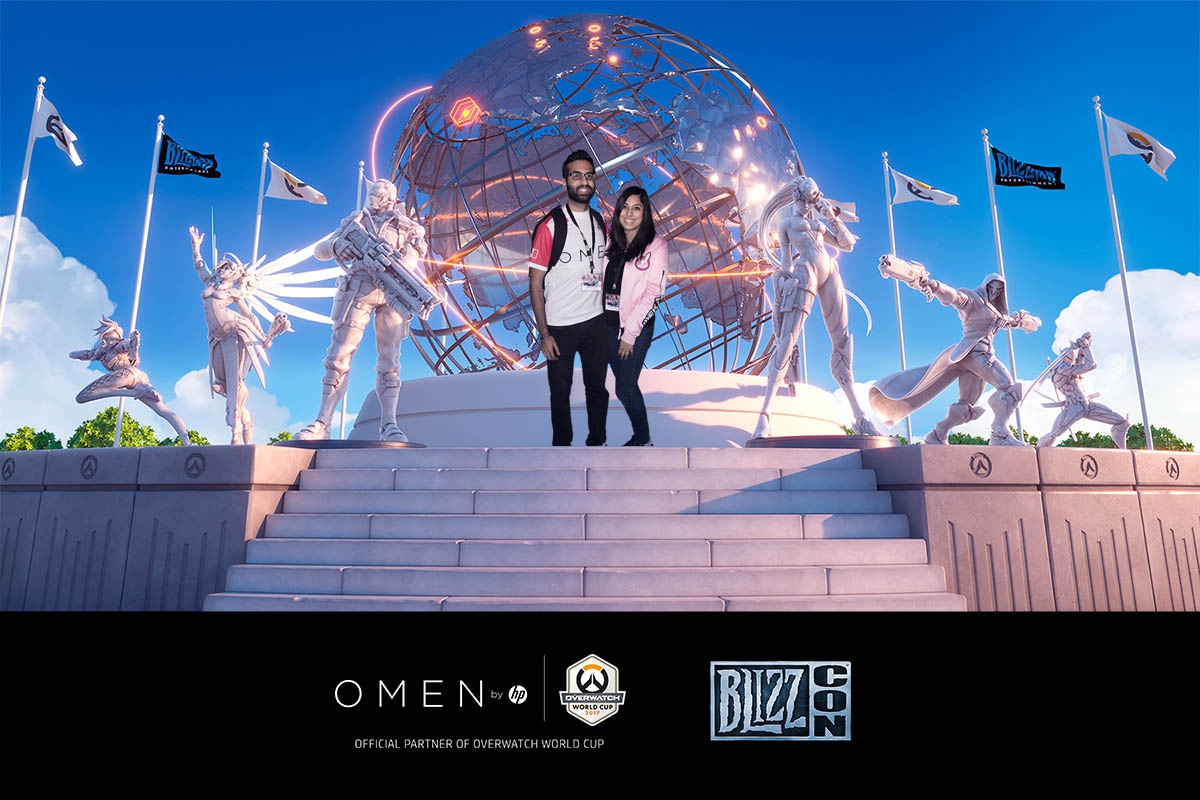