Venture underground with this week's Brawl, The Mines Reopen, which features Shuffle Pick hero selection followed by a standard Heroes match on the freshly re-worked and re-released Haunted Mines! Collect Skulls deep within the mines to summon a Grave Golem and compel it to aid you on your mission to destroy the enemy Core.

Pick one of three randomly selected Heroes before entering the Haunted Mines. Be quick about it, though —you only have 30 seconds to choose!

It has been quite a while since we last stepped foot into the Haunted Mines, so here's a refresher on the Battleground's primary objectives:

The Haunted Mines Battleground has undergone significant changes since it was last available for play, and we've turned it into this week's Heroes Brawl so everyone can get familiar with the adjustments we've made. Here are the key changes:

Complete three matches of The Mines Reopen to earn 1,000 Gold and the following portrait: 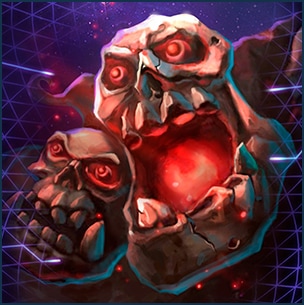 Find out more about the new Heroes Brawl game mode on our Heroes Brawl site; and as always, you can find more information on this week’s Brawl by clicking the Brawl Info button at the bottom of the play screen when preparing to queue for this exciting new game mode.