This week’s brawl is the Temple Arena! Harness the power of the Alligator, Cobra, and Jackal Temples to destroy the enemy Core! 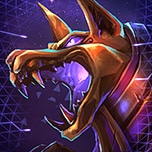