We just released a new patch for Heroes of the Storm, which brings a new Battleground and Hero to the Nexus, as well as balance changes, bug fixes, and more! Check out today’s patch notes below.

NOTE: You can find the detailed patch notes for the 9/29 and 9/30 hotfixes on our forums here and here. These changes have also been added to the notes below. 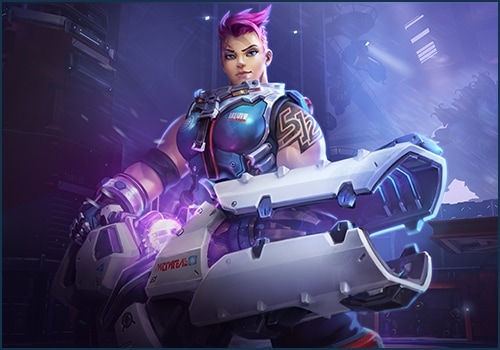 Aleksandra Zaryanova is one of the world's strongest women and was a promising athlete, but all that changed when the Siberian omnium reawakened. As a soldier in the Russian Defense Force, she now proudly uses her strength to protect the ones she loves.

Once a testing facility for nuclear weapons, Warhead Junction has since fallen into ruin. However, the site's abandonment hasn't stopped its glitchy adjutant from continuing to produce and hand out nuclear weapons. Join the arms race of Warhead Junction, build up your stockpile, and rain hell on your enemies!

Call Down the Thunder

Developer Comments: We’ve noticed a few more one-sided games than we’d like on Braxis Holdout. The battleground plays faster by design, but we think that a few changes to reduce the early game effectiveness of the zerg will put the balance closer to what we’d like after the battleground goes live.

Developer Comments: While we expected Alarak’s win rate to be a bit on the lower side due to how difficult his kit can be to fully execute, we felt that he could use some buffs to make him feel better to play. Across the board Lightning Surge is slightly under-performing, so we’re upping the power of the base ability and its related talents. We hope that this will properly reward Alarak players who take Lightning Surge related talents, particularly those who master the gameplay of clotheslining enemies with the Lightning. When we first designed Counter-Strike, we felt that crowd control was an appropriate counter to the ability since it was so powerful on paper and on a reasonably low cooldown. Since his release, we have seen that Counter-Strike is simply not as reliable as we had predicted since Alarak has 3 potential ways to fail to get value (enemies can fail to damage him, they can dodge the returning skill shot, or they can crowd control him out of his channel). We’ve decided to grant him Unstoppable for its duration to make it more reliable, and we are increasing its damage to further separate it from Deadly Charge.

Developer Comments: Reaching Through Time had a dominating pick rate, for good reason. We’re taking a little bit of that range from the Talent and adding it baseline. While we’re at it, we’re reducing the range on Temporal Loop slightly to require Chromie to put herself more at risk. Temporal Loop isn’t overpowered per se, but the majority of the counterplay required specific Heroes (Medivh, Auriel, Uther) or Cleanse. We’re also buffing her Health so that the sum total of all these changes will result in an improvement to her winrate, since she is slightly less powerful than what we’d like to see.

Developer Comments: Gul’dan’s slightly underperforming compared to other assassins, so we’re giving him some throughput buffs as well as buffing his Fel Flame ability. We know that the Echoed Corruption change may not be positively received as it is a slight nerf, but we believe it is better for the health of his talent tier and for him overall. The intent of this talent was for it to be a relatively large power spike but for it to come very late into the game. Currently it’s still being unlocked earlier than we would like, and it has a slightly higher win rate compared to other talents on the tier. We wanted to buff Corruption by lowering its cooldown, so we felt that it was appropriate to slightly increase its quest completion time to help balance it out.

Developer Comments:  Arcane Orb and the Talents affecting it have been slightly underperforming over the past couple months. We are also unhappy with the unpredictably large explosion radius that occurs at close range detonations. To address these concerns, we have made some base size adjustments to the Orb missile while also buffing Zei’s Vengeance to help round out the full build. While the size changes definitely look like a nerf on paper, in actual testing we felt like they gave players tighter control with a lot less early-detonations on unintended targets.

Developer Comments: After the change to Relentless Soldier in a previous patch, Tychus had 2 different ways to gain Resistant before level 10. While we like that Tychus is a “tanky Assassin”, we felt that him having more ways to mitigate damage than some melee Assassins to be too much. We decided to remove Shrug It Off because it felt misplaced on a tier that was primarily about Utility and Mobility. To compensate for the loss of Shrug It Off, we’ve decided to buff his baseline Health and Regeneration and the other Talent options at level 1. For players that really want to embrace the “tanky Assassin” role of Tychus, we’ve added Resistant to Odin so that you can truly feel like a scary mech of destruction while it is up.

Developer Comments:  We’re seeing a lot of success with Multi-Shot Valla’s builds, but the Basic Attack and Hungering Arrow focused Valla’s aren’t keeping pace. We really want to reward players for keeping their Hatred at high stacks and landing those Puncturing Arrows on their intended targets.

Developer Comments:  Nazeebo is one of the oldest Heroes in the game, and his Talent tree was in dire need of an upgrade. The goal of the revamp was to increase the reward of mastering the Hero’s Abilities, maintain his identity as a zone control and damage over time character, embrace the fun mini-game that was Death Ritual, and provide interesting synergies between Abilities and Talents. We wanted to be sure to reinforce the designed weaknesses of the Hero that are lack of burst and lack of mobility, while still making him viable in the current metagame of Heroes of the Storm. Overall, a lot of his old Talents had to be revamped or replaced, but we find that he still feels a lot like the old Nazeebo, just more interesting!

Developer Comments:  While we realize that Malfurion’s talent tree could use some work, and we want to do a deeper dive in the future, we wanted to give him a better niche among our other Support heroes in the meantime. His throughput healing should be higher, and a bigger part of his gameplay should now be rolling his heal-over-time effects among multiple allies to keep them alive. He now also has the unique ability to give allies cooldown reduction in addition to Mana, which should give him a new reason to be considered being added to a team. We’ve also buffed the initial root search for his Entangling Roots, which will enable him to more reliably root enemy Heroes instead of relying on his teammates to secure crowd control.

Developer Comments:  We know how much passion our players have for Chen and spent months upgrading his Talent Tree to our newest philosophies. To give you an idea of what we were looking to improve, here were a couple of our goals with this update: Chen should be able to be a solo-tank for your team and not be afraid to constantly soak enemy skill-shots. Chen should be a constant threat to the enemy’s backline damage dealers. Chen should deal low amounts of burst damage while continually applying sustained damage at pointed targets. Chen should be extremely resilient in the absence of enemy stuns. As always, we are listening to your feedback and appreciate everyone taking the time to send it to us. Enjoy the new Talent Tree, and as Chen has said many times before- “It is important to master the Brew and not let it master you!”

Developer Comments:  We like E.T.C.’s core gameplay, but wanted to improve his talent diversity. Many E.T.C. players end up picking the same talents in most games, especially at Levels 1 and 4, due to the importance of buffing Powerslide. We’ve streamlined that power, and have given him more options to play up the bard aspect of his kit, which should make him more of a team player.

Developer Comments:  We like the way Zarya is playing on live, but her impact is currently lower than we’d like. Her damage is too low and we feel that the rate at which her Energy decays is too quick, so we have adjusted them and will keep an eye on her.