We’ve just released a new patch for Heroes of the Storm! Today’s update marks the beginning of our Lunar Festival 2016 event, which brings new special event quests, rewards, and more to the game! Check out the patch notes below. 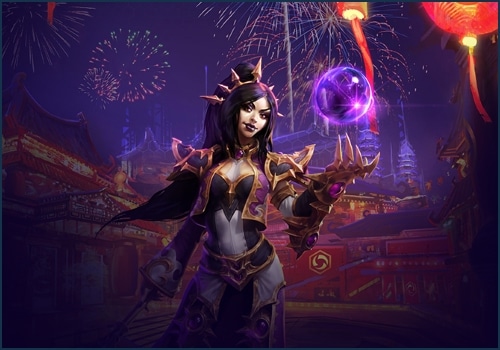 Developer Comments: The scaling changes we released in December made it so Heroes could dive into Structures with impunity during the early game. Increasing the damage that Structures deal to Heroes allows defending players to feel a bit safer. We are exploring other fixes to help Structures feel more meaningful throughout the game and will release them when they are ready.

Developer Comments: Since the Dragon Knight is flagged as a Hero, the increased structure damage was doing too much damage; Increasing Rubble Maker’s effectiveness to compensate felt appropriate.

Savage Charge felt like a dead button a lot of the time due to the Ability’s long channel time. This change has made the button feel a lot better to press.

Developer Comments: The Arcane Punishers have shown to be more effective than their Frozen and Mortar counterparts, so we lowered their Arcane Sentry damage to bring them more in line with other Punisher types.

Developer Comments: The talent is doing a bit too much damage over the course of the game. We like that it is a highly contested pick on Basic Attack Heroes, but want to bring its overall power down a bit.

Developer Comments: A few months of data have given us a good idea about which of Gall’s talents are under and over performing. We have made some balance changes and talent swaps to help these issues.

Developer Comments: Nova is a crowd favorite, and always at the top of our most played list. When we sat down to talk about what we wanted to do for her, we quickly realized that a slight Talent shuffle was not going to be possible. We wanted to keep her playstyle as similar to live as possible while also addressing some of our core concerns with her, which were:

This new direction for Nova addresses the first two issues by lowering her overall burst potential, while increasing her damage output overall. The most noticeable way we did this was through lowering both her Snipe cooldown and damage. For the third concern, we decided to do an overarching sweep of her Talents, removing the ones that weren’t working, and created some new ones that should offer interesting choices that promote Nova’s roaming and ganking nature. We realize that this is a slight departure from her long history of burst damage, but feel it is a better direction for her in the long run. We are watching her very carefully in order to react quickly and tune accordingly.

Developer Comments: We really like what Lamb to the Slaughter brings to The Butcher’s kit, but felt there were too many hard counters to it. These changes should help make The Butcher’s target feel more like they should when bound to a stake: scared and helpless.

Developer Comments: Being able to cast Shadow Assault more frequently and stick to his target better should help make Zeratul a lot more lethal when he chooses to give up the massive amount of utility that Void Prison brings.

Developer Comments: We really like that Malfurion can act as a partial Mana-battery to teammates and that he has great synergy with heavy Mana-users. We wanted to play this up while also making Versatile a more attractive Talent pick.

Developer Comments: The Talent system is incredibly complex, and we continue to learn more about its nuances every day. As our philosophies grow and change, we attempt to utilize them in our Hero updates. Rehgar’s changes were driven by this, and will help us learn even more in the future. Here’s a very brief explanation:

Developer Comments: Similar to Gall, a few months of data have given us a good idea about which of Cho’s Talents are under and over performing. We have made some balance changes and Talent swaps to help these issues.

Developer Comments: Overall, we are really happy with Sonya, but her burst potential was a bit higher than we were comfortable with.