All Roads Lead to BlizzCon

Welcome to the 2015 Heroes of the Storm World Championship, where the top 5-player teams on the planet battle for cash prizes and a chance to make history. The Championship begins with a series of open tournaments throughout the world. Local, national and then regional champions will brawl their way to BlizzCon in November for a chance at ultimate glory and a $200,000 cash prize. They’ll be crowned as Blizzard’s first professional Heroes of the Storm champions on the brightest stage in eSports.

The 2015 Heroes of the Storm World Championship is an open competition looking to shine the spotlight on the team with the perfect combination of collective skill, coordination and the will to win.  Form your team, take your shot and see if your roster has what it takes.

Five global regions will send teams to BlizzCon for the 2015 World Championship: Europe, Taiwan, Korea, China and America. Squads that want to make it to Southern California this fall will need to fight their way to the top of one of those five regions. The dream begins with five players that can work together, grow as a team and stay focused over the course of a few days at an open sign-up tournament. Winning in your corner of the world is the first step. 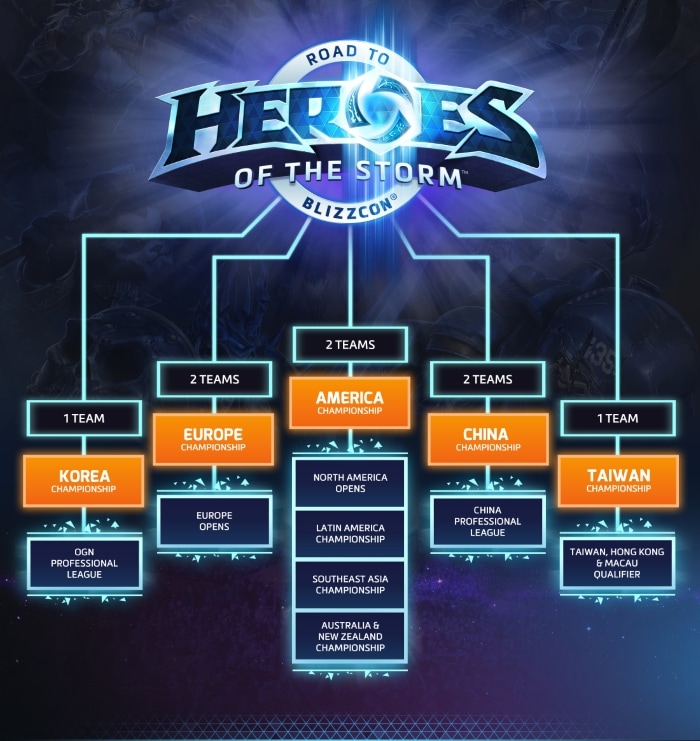 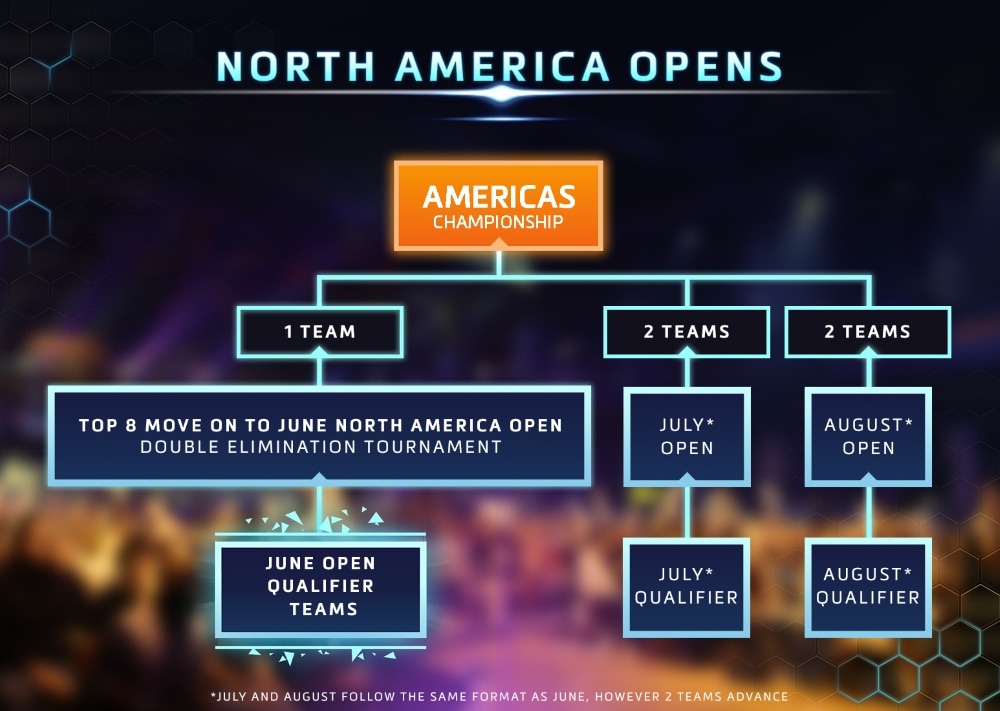 The Top 8 stage of a North America Open switches to a double-elimination structure while continuing with the best-of-three format. These matches will be streamed live with the production quality and casting talent that makes Open weekends must-see viewing. The winner of the June North America Open will earn a trip to the Americas Regional Championship in September.

Teams that fall out of a North America Open are still eligible for one of the subsequent Opens and their escalating prize pools. 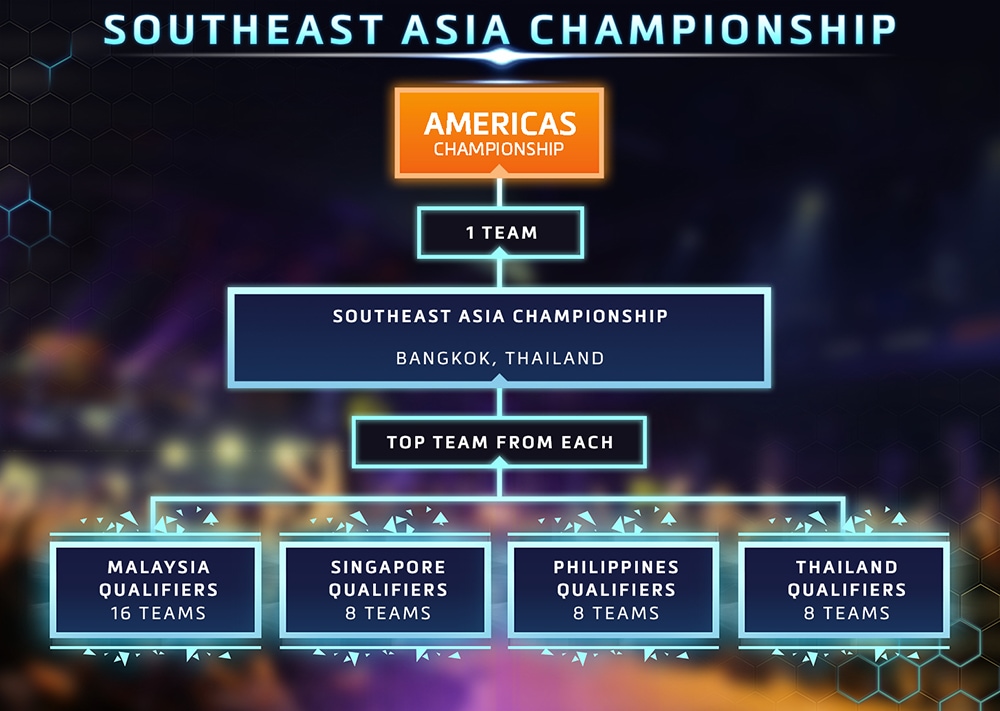 Along with the five North America teams, the Americas Regional Championship in September will also welcome the champion from the Southeast Asia region. Throughout July and August, Malaysia, Singapore, the Philippines and Thailand will each hold open tournaments that will crown a champion. Those four champions will then battle each other in Bangkok, Thailand for the chance to advance to the Americas Regional Championship. Head here to learn more. 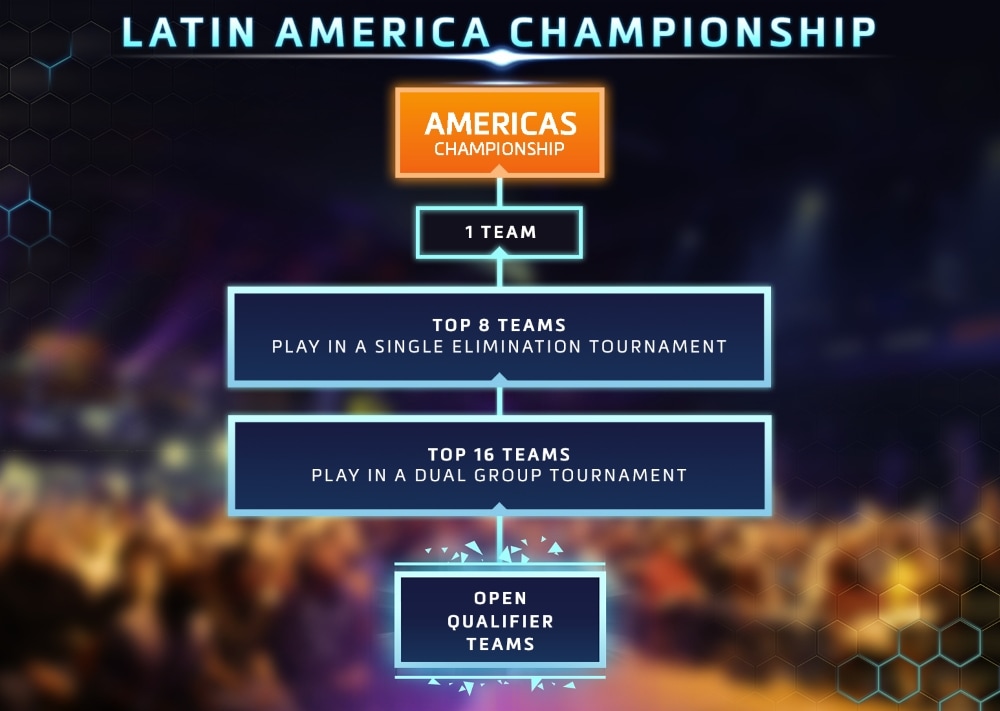 Teams competing in the Latin America region of the 2015 World Championship will have an intense battle to represent their region at the Americas Regional Championship. First, a series of single-elimination open tournaments will identify 16 sixteen top-notch squads. From there, it’s survive and advance as that group of sixteen teams battle their way down to eight via a dual group format tournament. The final eight will vie for the Latin America championship and a spot in the Americas Regional Championship in a single-elimination tournament in August. Head here to learn more. 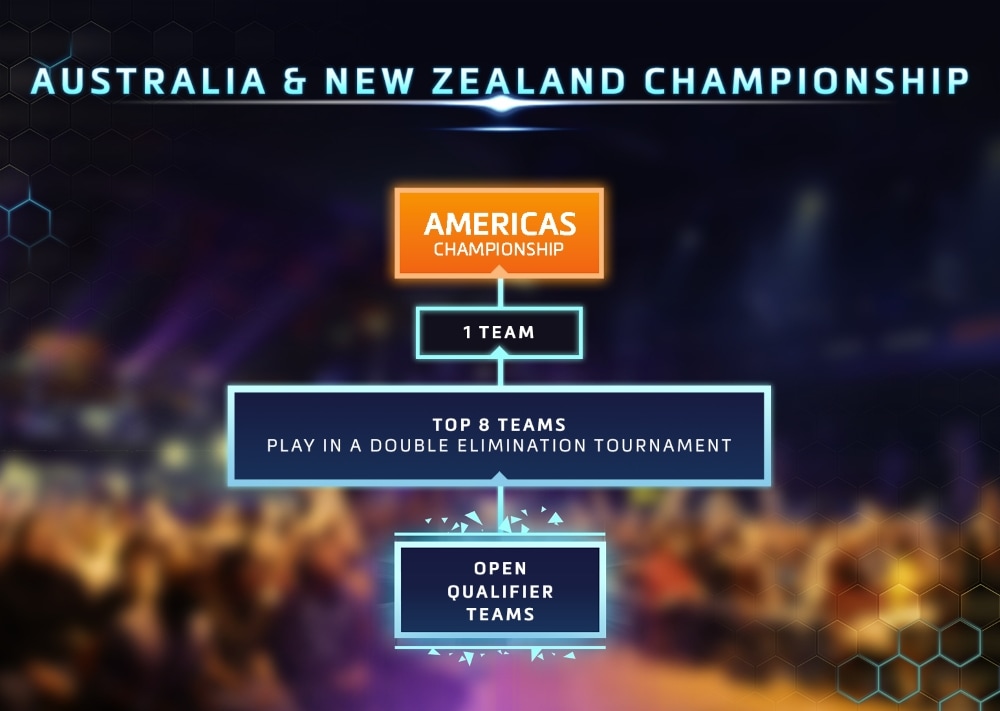 In Late August, the most battle-hardened teams in Australia and New Zealand will crown their champion via an 8-team double-elimination tournament. Local community tournaments will send two teams to that final battle in Sydney, Australia along with six teams from open qualifiers. The Australia/New Zealand champion will be the eighth and final team in the Americas Regional Championship in September. Head here to learn more. 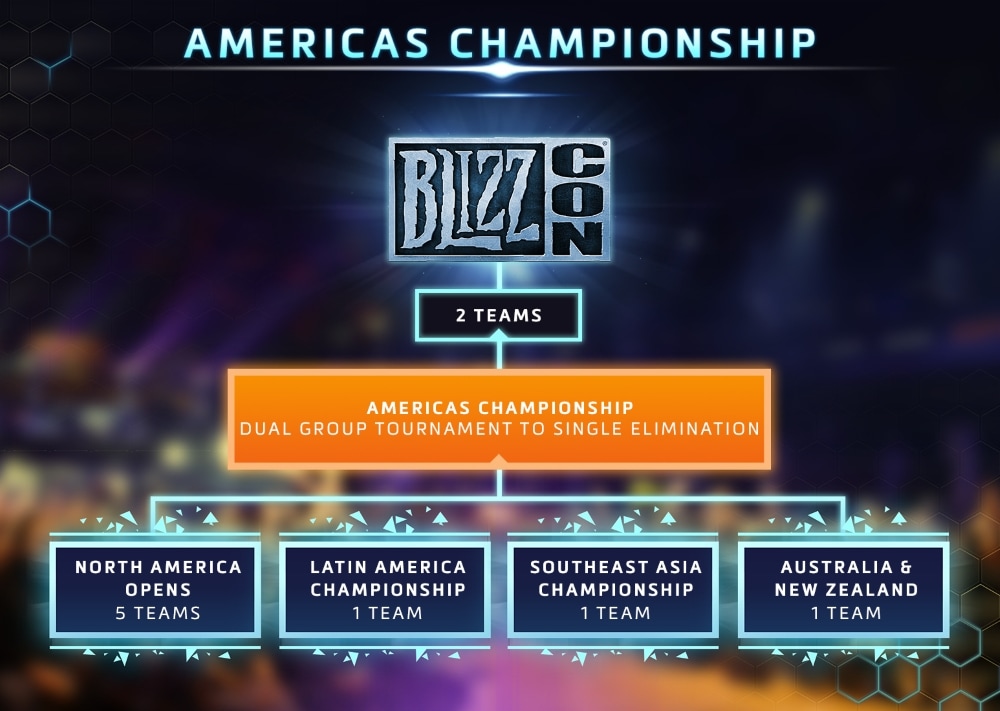 With five teams from North America, the Latin America champion, the Southeast Asia champion, and the Australia/New Zealand champion meeting up for the Americas Regional Championship, the competition will be intense. Having survived their local and regional crucibles, these eight teams will be chasing an even bigger prize: a trip to the World Championship at BlizzCon. Only the top two finishers at the Americas Championship will make it to Southern California for a chance at Heroes of the Storm supremacy and the $200K grand prize. This last stop on the Road to BlizzCon will serve as the final test of preparation, skill and maturation for these teams.

At BlizzCon, the two best teams from the Americas, Europe, and China will be joined by the top team from Korea and the Taiwanese champion to form the greatest eight-team bracket in professional Heroes of the Storm. One team will rise above all of the hype, pressure and distractions to recognize that BlizzCon is where champions are made.

While everyone is invited to participate in the North America Opens, there are some standards your team must meet before you can compete:

As the top Heroes of the Storm teams begin their quests to dominate the Nexus on the Road to BlizzCon, you can follow all of the action as it unfolds. Every combo landed, every Dragon Knight freed, and every ambush thwarted can be tracked through our network of partners, streamers and casters: