The Heroes of the Dorm collegiate tournament will reach its frenzied conclusion when the Grand Finals kick off this Sunday, April 26, at the Shrine Expo Hall in Los Angeles! Our Heroic Four teams have bashed and brawled their way through weeks of competition, as well as teams hailing from hundreds of schools across North America, to reach the Heroic Four -- but only one can emerge victorious. Join us in-person, or online, to cheer on the Heroic Four as they seek to earn ultimate glory in the Nexus, and win free college tuition along the way.

Those among you heading to Los Angeles this weekend can read on for more details about the event, as well as learn about all of the activities that you can take part in on game day.

While entry into the event is free of charge, kindly keep in mind that space is limited. Be sure to show up early, or you may find yourself at the end of a very long line!

Don't worry if you won't be able to attend the event in-person -- we've got you covered! You can always watch the Heroic Four duke it out from the comfort of your own home on ESPN3 via WatchESPN.com, as well as on smartphones and tablets using the WatchESPN app. You can even stream the show on your television through Amazon Fire TV and Fire TV Stick, Apple TV, Chromecast, Roku, Xbox 360, and Xbox One.

Be sure to check these lists of affiliated ISPs and other providers to see if you have ESPN3 access -- in many cases, you may have access based on your internet package regardless of whether you have TV service.

Additionally, players in Canada can tune in to all of Sunday's live Heroic Four action via The Sports Network.

Once our Heroic Four matches conclude, the online broadcast at ESPN 3 will come to an end, and we’ll switch over to ESPN 2, where Millions of homes nationwide will be able to tune in to catch the Grand Finals LIVE on prime time TV!

If you have a cable network subscription, you can still tune in to ESPN2 via WatchESPN.com, as well as on smartphones and tablets using the WatchESPN app. Once again, you’ll also be able to stream the show on your television through Amazon Fire TV and Fire TV Stick, Apple TV, Chromecast, Roku, Xbox 360, and Xbox One.

Pop some popcorn, collapse into a comfy seat, and flip your TV to ESPN2 at 6:30 p.m. Pacific / 9:30 p.m. Eastern on Sunday to find out which collegiate team will be crowned the Heroes of the Dorm.

Throughout the show, a legendary lineup of presenters will be in attendance at the Expo Hall in order to keep you caught up with every bit of the action as the Heroic Four and Grand Finals matches play out live on Sunday.

We've packed both floors of the Shrine Expo Hall to the brim with a variety of activities that you can check out in case you need to take a breather from the frenzied action taking place on the main stage.

All those who attend the Heroes of the Dorm Grand Finals in-person will receive a goody bag stuffed with epic rewards! Feast your eyes on the loot explosion that awaits you once the venue doors blast off their hinges on Sunday afternoon: 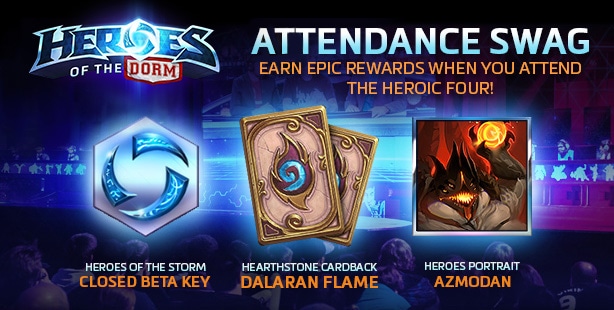 Just a few days remain until one of our hopeful collegiate teams will be crowned the Heroes of the Dorm! We hope to see you at the Expo Hall on Sunday, April 26. Until then, you can find more tournament information, and check up on your bracket predictions, by visiting the official Heroes of the Dorm website.