(Update) Introducing a New Broadcast Interface for Heroes of the Dorm

We’ve received plenty of viewer feedback about the new broadcast UI we used during the Super 16 Heroes of the Dorm broadcast last weekend, and wanted to fill you in on some changes coming to the interface, starting with the Epic 8 this coming Saturday, April 18.

Originally, we removed the minimap from our first iteration of the interface primarily due to readability and compression constraints. Due to overwhelming viewer feedback, however, we decided it best to display the minimap after all -- even if it’s not as perfect as we’d like. We’ll be unable to make any more changes to the interface between now and the Grand Finals, but we’ll still be listening closely to viewer feedback so that we can iterate further for future events. Without further delay, here’s a preview of the changes we made for our remaining Heroes of the Dorm broadcasts: 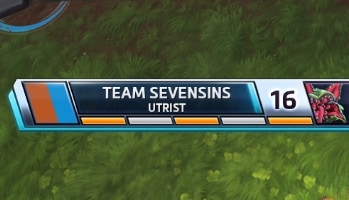 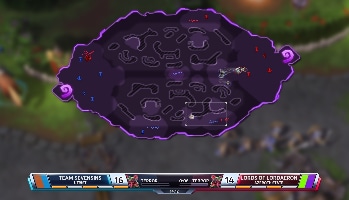 The Heroes of the Dorm collegiate tournament kicked off just a few short weeks ago, and since then, teams across North America have been battling one another for a chance to win college tuition and ultimate glory in the Nexus. The field grows ever-narrower as competition barrels toward the Grand Finals on Sunday, April 26, where just one team will emerge victorious. As mentioned previously, the Grand Finals will be televised live on an ESPN network, and there were several requirements Heroes of the Storm needed to meet in to appear on a wide variety of screens.

Much of the in-game UI would not fit into this framework the way the game is currently laid out, and scaling everything down might result in readability issues. With that in mind, we decided to re-evaluate and overhaul the observer interface we’ll be using during the show. Before making any changes, however, we hit the books and studied up on how traditional sports communicate information to their audiences.

After taking notes on graphics used by many different sports, we determined that the interface for our Heroes of the Dorm telecast should be very simple, easy to read up close or from a distance, and needed to let viewers stay focused on the gameplay. What we designed is, admittedly, quite different from the UI you’re used to seeing as an observer in replays and custom games, but we think it’s pretty slick! Click the image below to get an idea for how this will look on your screen during game day. 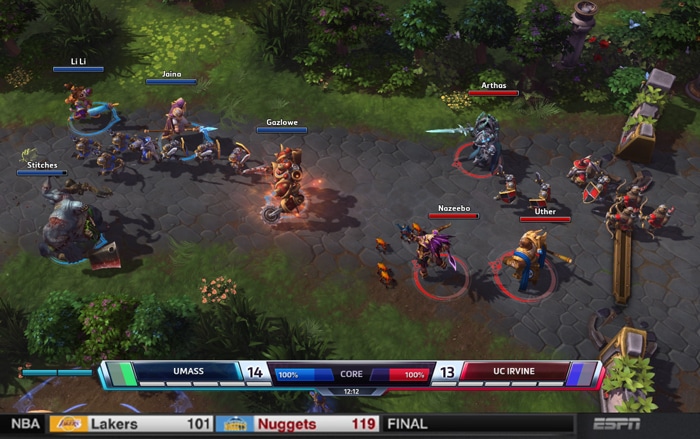 We’ve eliminated a lot of the information that, while important for playing Heroes yourself, tends to clutter the screen while watching others play. During the telecast, you’ll notice that floating text, Minion and Mercenary status bars, hero portraits, and the minimap, among other things, have been removed from the interface. We also relocated many other elements of the UI, consolidating them into one, compact panel near the bottom-center of the screen.

The center section of the panel will cycle through details about the state of the game, displaying each team’s total takedowns, and remaining forts, as well as Core Health, progress toward various Battleground objectives, and active Battleground objectives. To the immediate left and right of the center pane, you’ll find each team’s current level, while team names and logos will be displayed on the far-right and far-left sides of the panel. We took a more stylistic approach with how the heroes on each team are represented in this new “telecast” interface. Just underneath each team’s name and level, you’ll find a row of five bars. A white bar indicates that its associated hero is alive, and turns red when that hero has been taken down.

For Your Eyes Only

We understand that these changes to the observer UI may feel a bit unusual for an eSports competition at first, and we want to reassure you that this will not replace the traditional observer interface in-game. What’s more, this alternate version of the interface will only be displayed to viewers watching Heroes of the Dorm from home, or at the Shrine Auditorium. The event’s casters and observers will use the traditional observer interface to run the show, meaning that they will still have access to all of the information they’ll need to bring you an excellent broadcast.

Join Us for the Show!

We’re excited for you to check out this alternate version of the observer interface in action! To help prepare for the Grand Finals on April 26, we’re going to incorporate the new UI into our online broadcasts, starting with the round-of-16 on Sunday, April 12. While we won’t be able to make any changes before the tournament concludes, we hope you’ll share your thoughts on the interface with us so that we can continue to level it up in the future. If you do have any feedback to send our way, kindly head to the official UI and Features Feedback forum to let us know what you think.

Stop by HeroesoftheDorm.com regularly to keep up with more tournament information as it is announced, and be sure to tune in to WatchESPN at 10:00 a.m. PDT on Sunday, April 12 to catch the round-of-16. We’ll see you then!