Quests: A New Mechanic for Battlegrounds

But that’s not all! Season 2 will also bring with it a new Battlegrounds gameplay mechanic, Quests. These are like the Quests and Questlines we’ve seen in traditional Hearthstone, but with their own Battlegrounds twist. So, how will they work?

At the start of turn 4 (the 6 Gold turn), you’ll be offered three random Quest-Reward pairs to choose from. The pairs are made by combining a random Quest with a random Reward. You make one choice, claiming your selection as a pair, so you have to consider both which Reward you want to work towards and how tough it’ll be to get there. 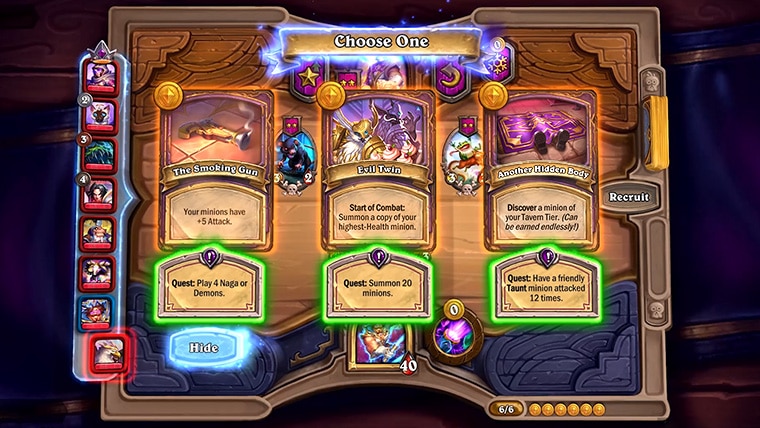 The Quests themselves have baseline requirements that vary based on which Reward they are paired with. Better Reward pairings will make the Quest a little harder to complete, while less powerful Rewards will make the Quest easier to complete. There are also small adjustments based on your hero’s Armor Tier (slightly harder for heroes with less Armor, slightly easier for heroes with more Armor), and some Quests are adjusted based on the minion types in the pool for a particular game.

Progressing your Quest is as simple as completing the requirement you selected in your Quest-Reward pair. You can check on your Quest progress and Reward by hovering over your Hero. You can also use the Scoreboard to scout your competition and see what Reward they chose (and whether they’ve earned it).

Once your Quest is completed, your Reward will show to the left of your Hero, in the same slot as your Weapon or Buddy Meter would go if you had one.

The Quest Rewards will grant bonuses that make you more powerful for the rest of the game, such as:

There are about 24 Rewards that your Quest can be paired with, depending on your match composition. Certain Quests and Rewards are restricted from being offered to specific Heroes or lobbies, to avoid extreme situations. Some Quests and Rewards are also offered at different rates, so even if a connection isn’t blocked, it might appear less frequently than others.

Keep an eye out for clues as your favorite Battlegrounds content creators will reveal more Quest Rewards over the next couple days:

It all goes live on August 30! Follow @PlayHearthstone on twitter for reveal recaps and keep an eye out for the 24.2 Patch Notes, coming later this week, so you don’t miss any of the action.