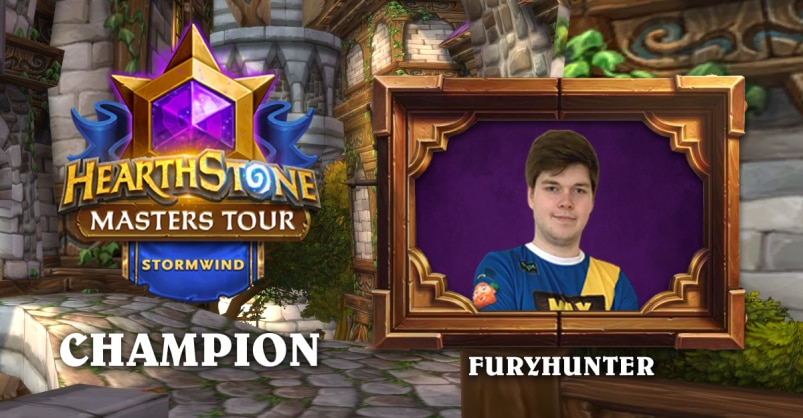 The fifth Masters Tour of 2021 has come to an incredible close, with Frederick “Furyhunter” Adam Møller beating fellow European Jim “badajimpom” Boer 3-1 to secure the championship and $25,000 (USD) in prizing!

"It feels amazing to win, I practiced a lot for this tournament and it felt great to finally get a top 16 and even better to actually go all the way and win it," Furyhunter, a member of <Max Team>, told us following the final match. "My top 8 series were the most nerve-wracking experiences of my life–I had so many close games and series that my heart needs to rest now. I could just feel and hear my heart racing because of the tension. It felt amazing every time I won, especially after a reverse-sweep. In the semifinal, I was sure I was out of the tournament in game 3, so I had kinda settled with that, but then I somehow didn't die and did an amazing comeback, a true rollercoaster of emotions!"

Furyhunter has been a staple of the competitive Hearthstone scene for years, securing championships at both DreamHack Summer 2018 and HGG 2019. Entering Sunday with a 7-1 record, his final day was far from certain. Despite a swift 3-0 victory over WEStone in the Top 16, his journey to the final was fraught with adversity. Quickly losing two games to MaggoGx, he fought back to secure a reverse-sweep to advance to the semifinal 3-2. Against Chinese powerhouse VK.msbc, Furyhunter again stumbled early on, yet through a combination of luck and high-pressure skill he was able to once more reverse-sweep 3-2 to claim another win.

Don’t miss a moment of the action when Hearthstone Esports heads to Undercity for the Masters Tour 2021 conclusion, November 19-21, only on YouTube. In securing this victory, Furyhunter bested 377 players from around the world to increase his Masters Tour Points total to 29, putting himself in contention for an invite to Grandmasters 2022. He along with the other top players from Americas, Asia-Pacific, and Europe will feel the pressure as it’ll be the final chance for them to earn points toward Grandmasters 2022.  We’ll see you in the Tavern!