Grandmasters 2021 Season 2 will be United in Stormwind!

Hearthstone Grandmasters 2021 started with a blast, providing some of the most intense matches we have seen in years! New stars emerged in every region, and the advent of weekly seasonal tournaments set new heights for players to aspire to in their quest to join the Hall of Champions. As we go into the second half of the year, we look toward Season 2 of Grandmasters, and cannot wait to get the next phase of competition started.

With the announcement of United in Stormwind, we can’t wait to see how Grandmasters bend the new expansion to their will on the journey to the World Championship. Season 2 will officially begin on Thursday, August 12, when all 48 players battle in the fresh Alliance-based meta in the Week 1 tournament. Players that make it through the first round will compete on broadcast Friday, August 13 through Sunday, August 15, only on YouTube. 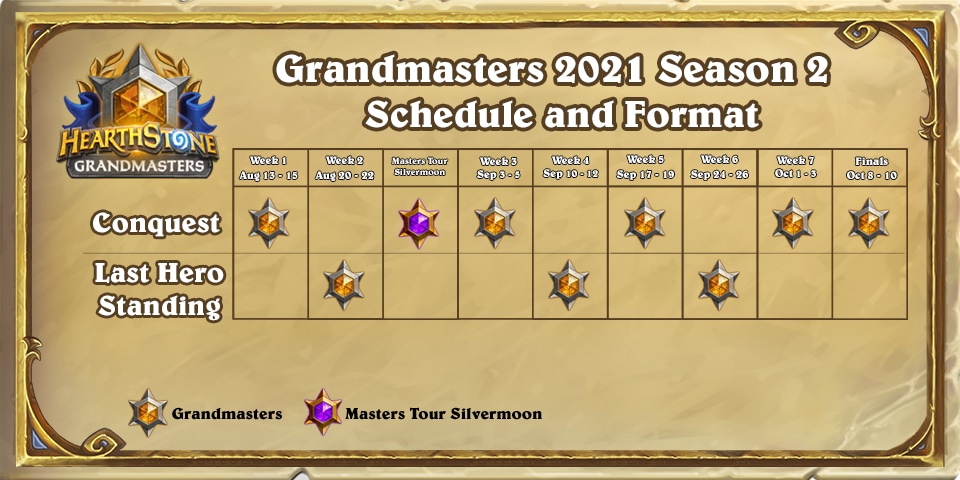 We’re keeping things consistent for Grandmasters 2021 Season 2, with a primary focus on improving weekly formats. In 2019, we introduced Specialist as a simplified replacement for Conquest that would still require high-level strategy from players—while we are happy with the Specialist format itself, it hasn’t proven to be the all-encompassing mode we had hoped. Specialist succeeds in the high-level competitive thinking we aimed for, but with individual matches often lasting several hours, the community enjoyment of watching top players has suffered. Though we plan to revisit Specialist in the future, we are removing it from the next season of Grandmasters. In its place, we will be alternating between Conquest and Last Hero Standing—the formats players and viewers are most familiar with, and that still provide high-level competition.

The conclusion of Season 1 forced us to, sadly, say farewell to the bottom four players from each region. Yet, the top four Masters Tour Points-earners from Americas, Asia-Pacific, and Europe have been promoted to Grandmasters! These 12 new players will compete over seven weekly tournaments for their shot to compete in the Season 2 Finals, where the winner of each region will advance to the 2021 World Championship.

The Season 2 champions will advance to the 2021 World Championship, where they will face the top two Chinese players from the China Gold Series as well as the Season 1 regional champions. However, the Season 1 champions—Nalguidan, Posesi, and Frenetic—must avoid relegation to hold onto their invites, otherwise they’ll pass down to the Season 1 runner-ups. The pressure is higher than ever for everyone this season, and it’ll all come down to which players can master the all-new United in Stormwind expansion and earn their spot in the 2021 World Championship!

Be sure to follow us on HS Esports Twitter to let us know your thoughts on the Grandmasters format and give us feedback on what you like, enjoy, love, and really love, so we can keep improving Hearthstone Masters in 2022 and beyond! Thanks, and we’ll see you in the tavern.