Tales from the Tavern: Paradox and Trahison 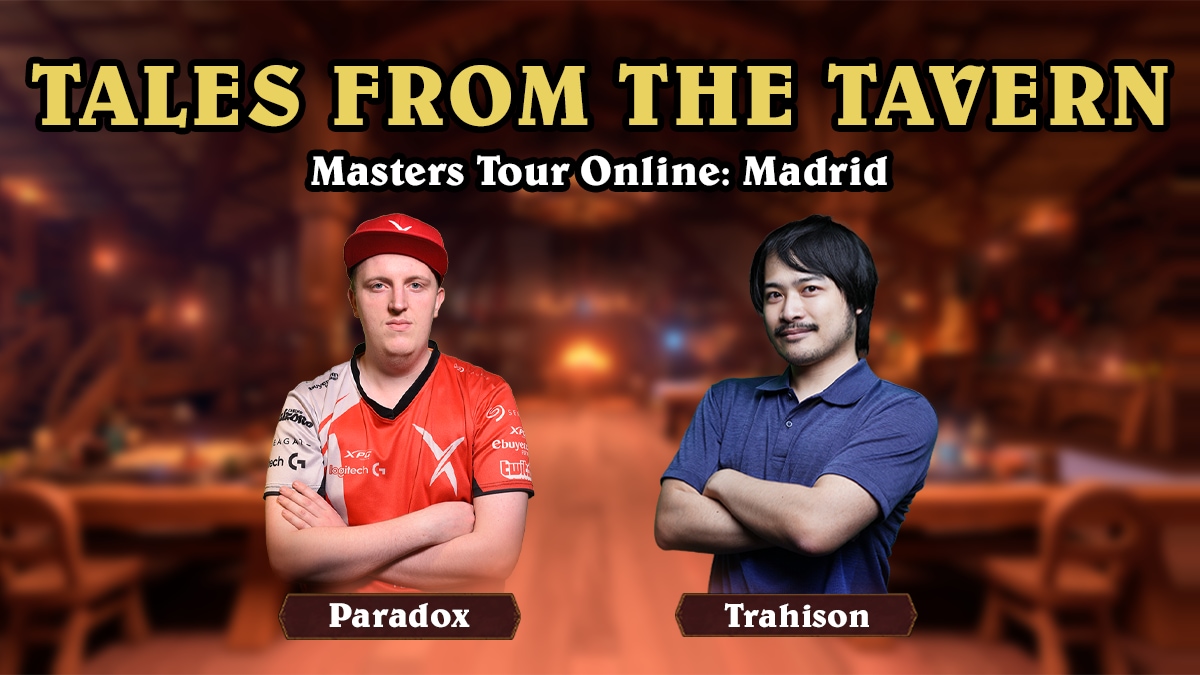 With more than 300 players to keep an eye on, Masters Tour events are full of new competitors to follow. For every returning player at each event there is someone new hoping to make a name for themself, and everyone is playing for their shot at joining Hearthstone Grandmasters. It is this mix of players that makes the Masters Tour so exciting to watch!

Although Grandmasters also participate in the Masters Tour, I’m going to introduce you to regular players who have incredible stories you may not be familiar with, all of which you should keep an eye on. This is the second of two Tales from the Tavern explorations for Masters Tour Online: Madrid, live beginning this Friday only on YouTube!

Oliver “Paradox” Barnett got into Hearthstone in 2014, and has since held many different roles within the community, including: player, caster, analyst, coach, and streamer.

He first made a name for himself when in 2016 he beat BoarControl to qualify for the WESG European finals in Kiev. He repeated this feat (and took out DeadDraw along the way) two years later when he won the ESL UK Premiership, before also securing a top 16 finish at HCT Philadelphia at the end of 2018.

With a strong 25-17 record in Masters Tour events, he is regularly mentioned on the second day of Masters Tours as a contender for the championship. However, Paradox fears being seen as a one-trick pony and despite consistently strong performances he still feels he needs another big top 8 finish to prove his skill – at this point, probably just to himself.

As a big lover of long-term strategy games, he likes matches that take time to unfold. It is unsurprising that his favorite class is Priest. Paradox enjoys the methodical approach that Priest often encourages and the intensity of games that go to fatigue where players must exercise all resources to win.

Paradox hopes to elevate the standard of Hearthstone in the United Kingdom, while acting as a bridge between the casual and competitive scenes in his home country. To keep up his skills, he tests with Meati and newcomer, PocketTrain. This desire to reach the top of competitive Hearthstone has inspired him to write regular reports on Qualifiers, which fans can read on Twitter. It will be exciting to see if he can use this knowledge to bring the best lineup to Madrid.

In Japan, Masaya “Trahison” Sasaki is still known by his previous Battletag “Ombre”, a name he chose after seeing the word on his then girlfriend’s eyeshadow makeup.  However, he changed his name to Trahison after their relationship ended.

He started playing a variety of card games at the age of 10, often playing with friends at school. One day, his teacher warned him not to bring expensive items, including cards, to school so he hand-drew his own cards. These custom cards became a staple and he played with them every single day!

Trahison’s first competitive tournament was in 2006 while he was still in high school. Despite playing for years he didn’t perform as well as he wanted and decided to take a little time away from card games.

Almost a decade later, Trahison heard that Yutori, a friend he met through card games, was representing Japan in the AfreecaTV International College Hearthstone Championship 2015. This immediately sparked his interest in Hearthstone, particularly the fact he could play Hearthstone online. He signed up for an account in May 2016 after the release of Whisper of the Old Gods. It only took him eight days to reach Legend, followed by a brief spot in the top 10 on the Asia-Pacific server a month later. He was “completely enchanted by Hearthstone.”

Trahison made it to his first big competition – the APAC Summer Playoffs – in 2018, followed by representing Japan in the Hearthstone Global Games later that year. He has qualified for Master Tour tournaments through the four main means available – Ladder, Qualifier Tournament, five top 8 finishes in Qualifiers, and a 7-2 Masters Tour record.

At the recent Masters Tour Montreal, Trahison brought a lineup that focused on beating Bomb Warrior, going 7-2 in the tournament. The following week his strategy was reinforced when Che0nsu brought the exact same 120 cards to Grandmasters. Will Trahison bring another innovative lineup to Madrid, and finally crack the top 8? We will find out soon!

I would like to thank Rikapi for her translation help in creating this article.

Masters Tour Online: Madrid starts this weekend! The broadcast will be live on October 23 at 6:00 a.m. PDT on YouTube.com/HearthstoneEsports!