Grandmasters 2020 Season 2 Champions Are Heading to the World Championship! 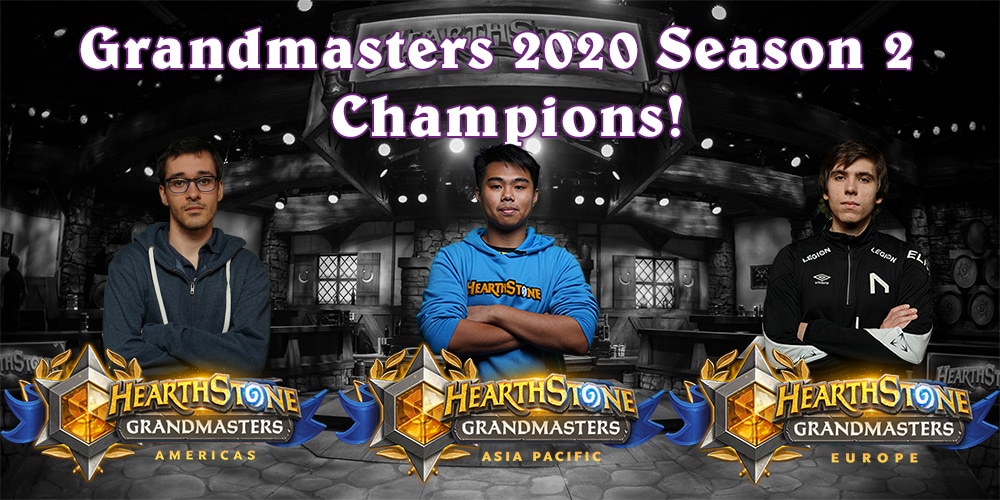 Grandmasters 2020 Season 2 has concluded, and three more players have secured their spot in the Hearthstone 2020 World Championship! Congratulations to Pramet “Bankyugi” Putchakan, Jaromir “Jarla” Vyskočil, and Jerome “Monsanto” Faucher on your Season 2 victories.

In Americas, Jerome “Monsanto” Faucher’s path through the playoffs was full of challenges. The number 1 seed in Group B secured difficult victories against Mihai “Lnguagehackr” Dragalin and Luke “NoHandsGamer” Kooken to make it to the Top 4. On day 2, Monsanto once again faced close matches as David “killinallday” Acosta forced him to a 3-2 final, before facing off against Fei "ETC" Liang in an intense back and forth final before securing the 3-2 score to advance to the 2020 World Championship.

In Asia-Pacific, Pramet “Bankyugi” Putchakan went into Playoffs in second place for Group A and initially fell to first place Jung-Soo “Surrender” Kim. He battled his way back to the Top 4 after defeating Sato “glory” Kenta, the Season 1 champion. Bankyugi secured his spot at the World Championship after taking down 2018 World Champion Wei-Lin “Tom60229” Chen 3-2.

In Europe, Jaromir “Jarla” Vyskočil entered Playoffs as the top seed in Group B, and quickly asserted his dominance after a stunning 3-0 victory over Theo “Felkeine” Dumont and 3-2 over Zakarya “xBlyzes” Hail. The Top 4 proved no different, as he made short-order of Linh “Seiko” Nguyen in another 3-0 sweep before defeating Thijs “Thijs” Molendijk 3-1 to secure the final European spot at the 2020 World Championship.

Sadly, this weekend also saw the last relegation spots for Season 2 filled. Enzo “Warma” Flock, Hyun-Soo “Flurry” Cho, and David “justsaiyan” Shan all fell today in the final relegation matches for each region. They are not completely out of it yet, as each has a chance to regain their spot in Grandmasters if they have earned enough from this year’s six Master Tours, following Masters Tour Online: Madrid later this month.

Congratulations to Bankyugi, Jarla, and Monsanto! They will join Luna "bloodyface" Eason, Sato “glory” Kenta, Vladislav “SilverName” Sinotov, and Fan “iG.Syf” Yilun at the 2020 World Championship December 12-13. The final Chinese competitor will be decided on November 15, but before then there is a ton of incredible Hearthstone Esports action to catch: the first EMEA Battlegrounds cup is up next, taking place this weekend October 16-18, followed by Masters Tour Online: Madrid from October 23-25 only on YouTube. We’ll see you in the Tavern!